Add sprinkles to a classic cinnamon roll recipe, and you’ve got a party! These Overnight Funfetti Cinnamon Rolls are a fun way to start the morning!

Sprinkles have a magical element to them. Sure, they’re just colored bits of sugar. But as soon as you add sprinkles to a recipe, it becomes a party! Think about it. White cake is delicious. But add sprinkles to that white cake? Party time! Same thing goes with cinnamon rolls. I love a good cinnamon roll. But add in sprinkles? Let’s party!

Overnight cinnamon rolls are the way to go if you want an effortless breakfast! All of the work is done the afternoon before. The next morning, you just pull the skillet out of the fridge and let it rest in a warm spot for about an hour and a half. I typically just stumble downstairs when I first wake up and pull the rolls out. Then I turn my attention to making coffee and actually waking up.

I was craving cinnamon rolls recently, so I decided to make a batch of those overnight cinnamon rolls. But as I was grabbing the flour from the pantry, I noticed the sprinkles. That’s when it hit me – Funfetti Cinnamon Rolls. They’re identical to regular cinnamon rolls, but with a party vibe!

Funfetti is a blending of ‘fun’ and ‘confetti,’ and it involves adding sprinkles to the cake batter and frosting. Pillsbury coined this term back in 1989, and since then funfetti desserts have become wildly popular. Just look at the boxed cake mix section next time you go shopping – there are no less than 8 different versions of funfetti cake! Different colors for the sprinkles, different shapes for the sprinkles. You name it.

Turning our attention back to these Funfetti Cinnamon Rolls, I ‘funfetti’d’ these by adding a generous amount of sprinkles to both the dough as well as the filling. Robbie, our 6-year-old son, loved the sprinkle twist. Me? I just loved having an excuse to make cinnamon rolls! I hope you enjoy these fun cinnamon rolls as much as we did – happy baking!

Did you make a batch of these Funfetti Cinnamon Rolls at home? Leave a comment, or snap a photo and tag me on Instagram (@Spicedblog) – I’d love to see your version! 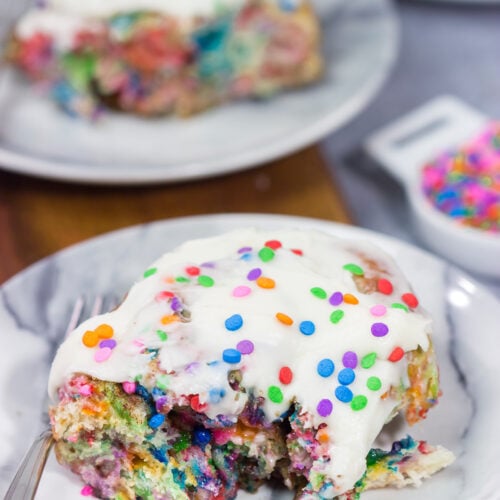 Looking for more tasty cinnamon roll recipes? Check out these other favorites, too: