These Overnight Gingerbread Cinnamon Rolls are filled with comforting spices…and they’re perfect for serving during the holidays!

Let’s talk about bread for a hot minute.  I love bread.  There’s something incredibly satisfying about taking flour, water and yeast and watching it turn into a loaf of bread.  I find it therapeutic to “play with” (i.e. make and shape) bread dough.

I love the smell of bread as it bakes.  And of course, I love cutting into that loaf of freshly baked bread.  I have absolutely made entire meals out of this homemade Italian bread.  And a good grainy sandwich bread is up there at the top of my list, too.  (I kinda have a thing for sandwiches…and sandwiches are only as good as the bread they’re made on!)

Last week, I was making a peanut butter sandwich for Robbie, and I found myself slicing off the crust.  Is that some innate thing that happens when you become a parent?  You instantly learn how to change diapers and cut the crust off of bread?  (Ok, maybe not so much on the diapers front.  Those first few times were a bit, uh, funny.)

I remember my own Mom used to cut the crust off of bread, too.  And then as I got older, she tried to convince me that all of the vitamins in the bread were in the crust.  Have you heard that one?

I always thought that was just a ploy so that she could stop slicing the edges off of my sandwiches.  But it turns out Mom was right…the crust of bread is indeed better for you!

As I was wandering through the rabbit hole that is the internet the other day, I stumbled across a German study from 2002 that found that bread crust contains 8x more antioxidants than bread crumb (i.e. the interior portion of bread).  In fact, the elevated enzyme in the crust (pronyl-lysine) has been shown to be effective at fighting cancer!  Seriously!?  Ok, Mom, you were right.  Bread crust is important!  It helps fight cancer!

While today’s Overnight Gingerbread Cinnamon Rolls recipe isn’t a standard loaf of bread, it does involve dough…and all sorts of delicious holiday spices.  (For the record, that study found that crusts on both yeasted and non-yeasted bread have elevated levels of pronyl-lysine.  That means eating one of these cinnamon rolls will help your body fight cancer!  Haha!)

This Overnight Gingerbread Cinnamon Rolls recipe is indeed a yeasted dough, but don’t let that deter you!  This dough is mixed up and shaped the day before.  Then the next morning, just let the dough rest in a warm spot while you make a cup or two of coffee and catch up on Uncle Ed’s latest antics.

These Overnight Gingerbread Cinnamon Rolls are seriously perfect for Christmas mornings…or anytime during the holidays!  They’re pretty easy to make, and your house will smell amazing while they’re baking. The gingerbread flavor in this cinnamon rolls is out of sight, too!

For the record, Robbie ate every bit of his Overnight Gingerbread Cinnamon Roll…crust and all!  Happy Holidays, my friends! 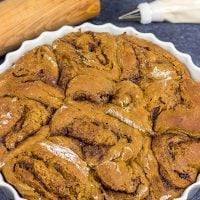 Love cinnamon rolls as much as I do?  Then check out these Maple Glazed Cinnamon Rolls!