If you’re looking for the ultimate start to the day, turn on the oven and make a batch of this Homemade Cinnamon Toast!

Laura and I agree on most things. We agree that warm weather is better than cold weather. We agree that lobster is overrated. We agree that Scrappy Doo ruined Scooby Doo (ok, I might’ve added that one on my own). But one thing we do not agree on? Toast. Yes, toast.

Bread. Cinnamon. Sugar. Butter. That’s it. 4 ingredients. Together they create the ultimate of morning bliss! To be fair, I did add a tiny bit of vanilla extract and a pinch of salt to this recipe, so I guess that makes 6 ingredients. The vanilla and salt can be omitted, but I do think they are worth adding.

In the end, this Homemade Cinnamon Toast is a thing of beauty. The bread is soft, but not soggy. It’s crunchy, but not too crunchy. It’s delicious!

There are a couple of keys to this Homemade Cinnamon Toast recipe. First, the butter mixture. Instead of buttering the toast and then adding the cinnamon sugar mixture on top, you mix it all together first. The result is a thick paste of sorts that gets spread on top of the bread. And don’t forget to spread the cinnamon butter all the way to the edges of the bread. We need maximum cinnamon butter coverage on that toast!

Laura commented that the cinnamon butter topping on this bread tastes just like the inside of a cinnamon roll. She’s right! Heck, we could’ve called this recipe Cinnamon Roll Toast. No matter what you call it, it’s delicious.

Once the cinnamon-sugar butter topping is in place, just toss that bread on a baking sheet and bake it for 10 minutes or until the topping is golden-brown and bubbling. Yup, the best cinnamon toast is made by baking the bread. Trust me here!

Oh, and then there’s the broiler. Once the bread has baked, switch on the broiler for a minute or two. Broiling the cinnamon toast helps crisp up the cinnamon butter on top without burning the bread underneath. It’s pretty darned amazing!

Sure, you can buy cinnamon sugar in the spice aisle at the grocery store, but it’s much easier to make at home. The ratio I use is ½ cup of white sugar to 3 teaspoons (1 Tablespoon) of cinnamon. If you want to get fancy, you can use part white sugar and part brown sugar, but that’s about it. Nice and easy!

If you’re looking for the ultimate start to the day, turn on the oven and make a batch of this cinnamon toast! I hope you enjoy this recipe as much as we do. Happy baking!

Did you make a batch of this Homemade Cinnamon Toast at home? Leave a comment, or snap a photo and tag me on Instagram (@Spicedblog) – I’d love to see your version! 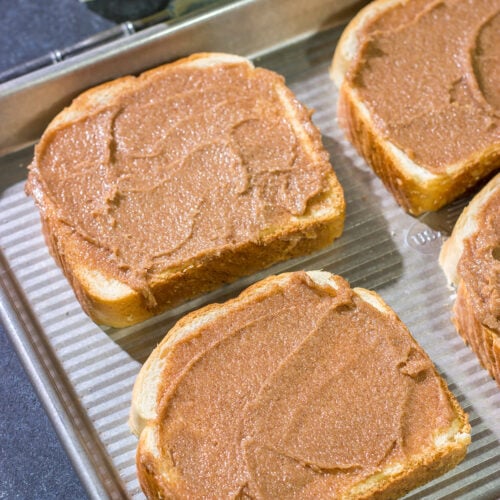 If you're looking for the ultimate start to the day, turn on the oven and make a batch of this Homemade Cinnamon Toast!
5 from 5 votes
Print Pin Rate
Prep Time: 5 minutes
Cook Time: 12 minutes
Total Time: 17 minutes
Servings: 4 servings
Calories: 229kcal

Looking for more tasty recipes? Check out these other favorites, too: