This French Peasant Bread is an easy homemade bread that’s perfect for sandwiches…or just a simple smear of salted butter! 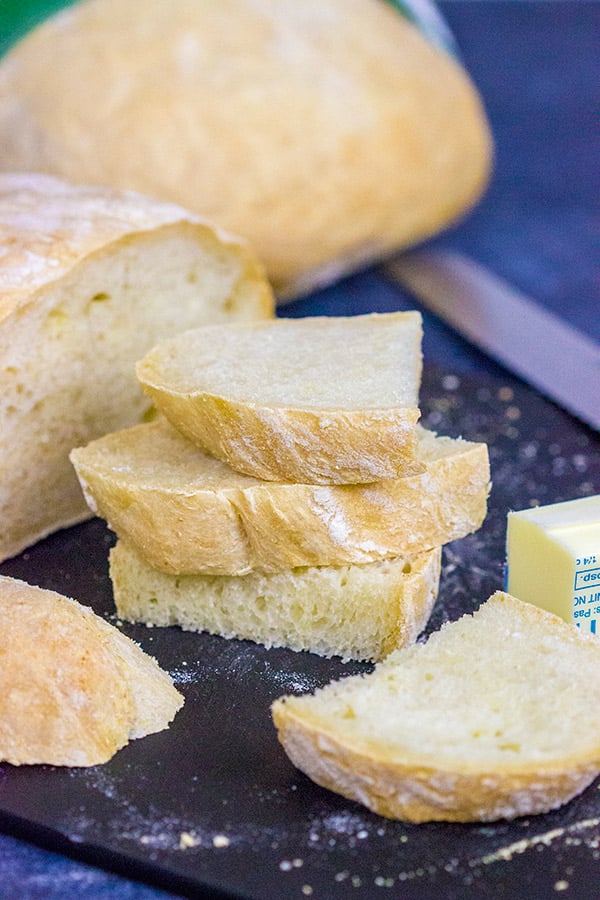 Most of us are familiar with college football and the bowl games.  And we know about college basketball and March Madness.  And Super Bowl Sunday is pretty much a holiday here in the States.  But did you know there is a world cup of bread baking?  Yup, and it’s a pretty serious competition.  The Coupe du Monde de Boulangerie is held every 3-4 years in Paris, and countries have to be invited based on their performance in regional baking competitions.  I told you the Coupe de Monde is a serious event! 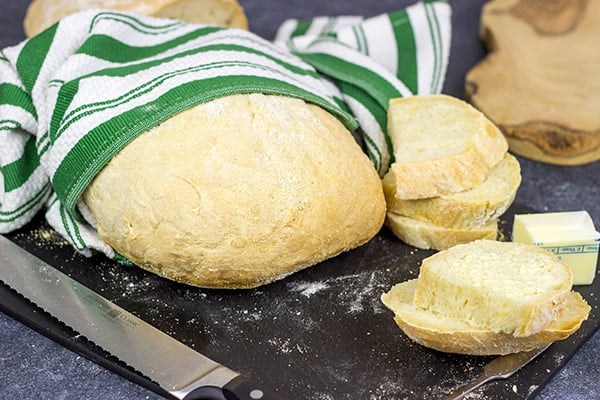 The last Coupe du Monde was held in 2016, and it produced a stunner.  For the 2nd time in a row, France did not take home the title.  We all know France is known for it’s bread.  I’m pretty sure I could live on French baguettes and cheese.  But in 2016, South Korea won the coveted award of world’s best bread bakers.  (France did finish 3rd, though.  And if you’re interested, the U.S. came in 5th.)  Rather than a sign that French bread is declining in quality, I think this is a sign that bread quality across the world is improving.  Artisan bakeshops have popped up all over the place, and rightfully so.  Bread baking is a true art, and I could sit and stare at a bakery wall full of loaves of bread for hours on end.  I’m weird like that.

But you don’t have to be a Coupe du Monde participant to make excellent homemade bread.  Take this French Peasant Bread for instance.  This is pretty darn easy bread to make at home.  Our local grocery store makes a good French Peasant Bread, and I decided to take a stab at baking this one at home instead.  And I’m pleased with the result! 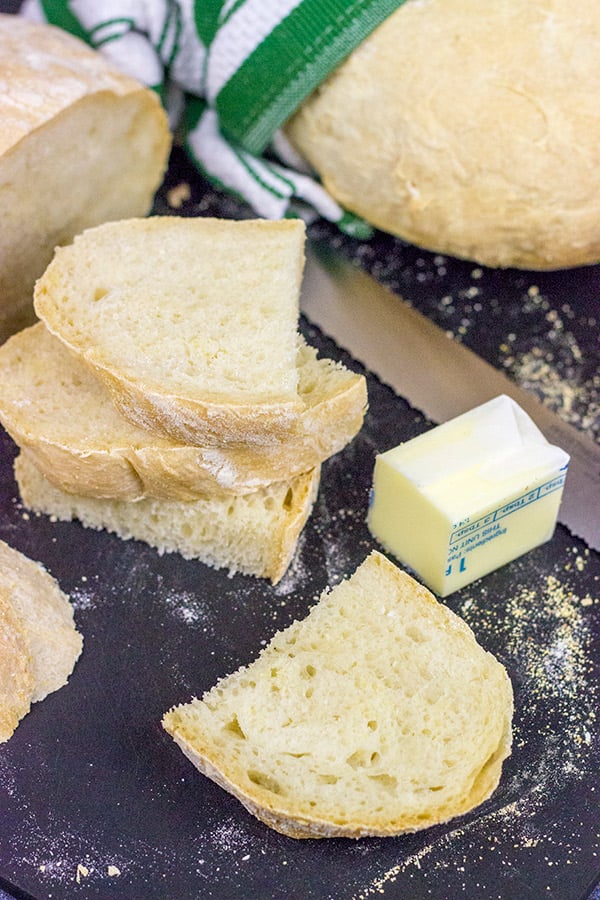 There was a time (aka pre-Robbie) when I decided I was going to do all of the bread baking for our house.  No more store bought breads here.  Then the stork dropped Robbie off on our doorstep, and I quickly learned that bread baking and Robbie parenting are inversely related.  But with that said, I still love to bake bread.  It’s one of my favorite kitchen activities…especially on cold, January days. 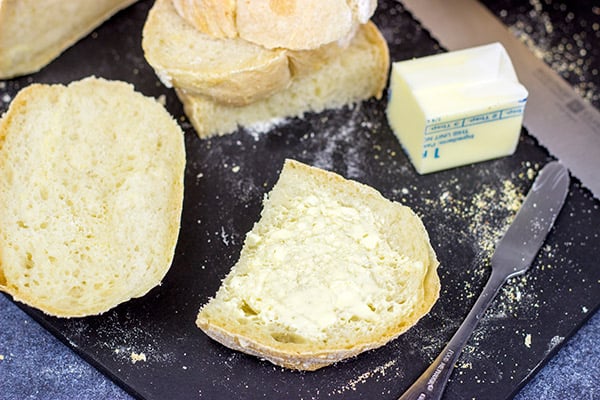 I’m not entirely sure what French Peasant Bread actually is.  It doesn’t seem particularly French in any way.  Perhaps its name comes from the fact that this is such a simple bread.  Who knows?  But I do know that it produces one darn tasty loaf of bread…well, two actually.  Unlike a classic Italian bread with it’s large, open holes in the crumb and chewy crust, this French Peasant Bread is a bit more dense.  But I wouldn’t call this a dense bread at all.  In fact, this bread would be perfect for sandwiches.  But that would mean I have to avoid eating it all with a simple smear of salted butter.  And that’s a real challenge, my friends. 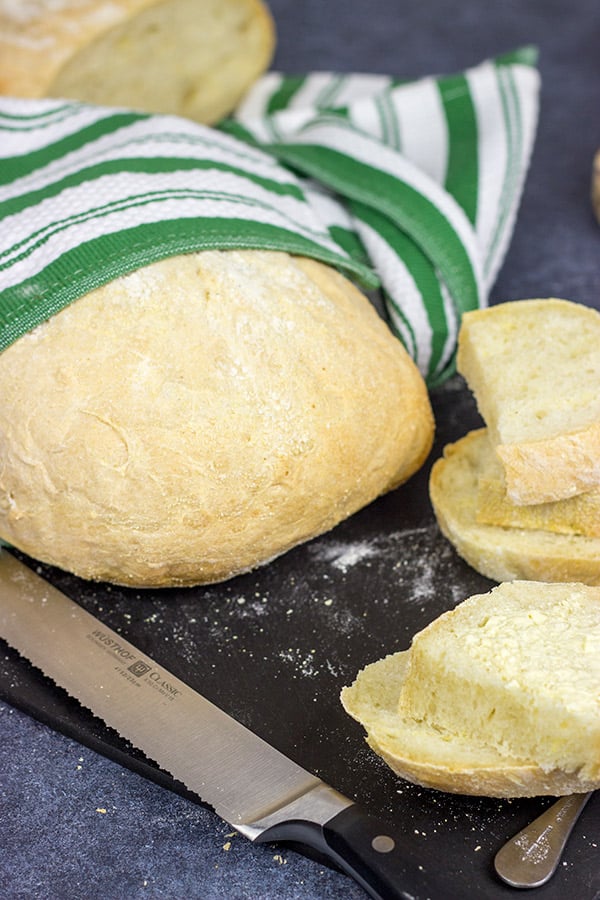 As we head into winter, I highly recommend baking some homemade bread.  Learning to bake bread must be relatively high on New Year’s resolution lists as I often get comments and questions about my homemade bread posts around this time of the year.  This French Peasant Bread recipe is relatively easy, and the ingredient list is fairly short.  If you’ve never tried your hand at baking bread, then give this one a shot!  And, hey, you never know.  You might end up at the next Coupe du Monde de Boulangerie in 2020.  (Heck, attending the Coupe du Monde wouldn’t be a bad vacation at all.  I mean you’d be in Paris sampling some of the best bread in the world.  Sign me up for that one!) 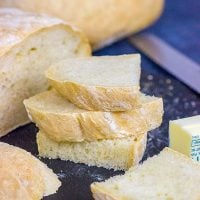