Loaded with Cajun flavor and topped with a remoulade sauce, these Spicy Cajun Burgers are sure to be a hit at your next backyard picnic!

This post brought to you by Char-Broil. The content and opinions expressed below are that of Spiced. 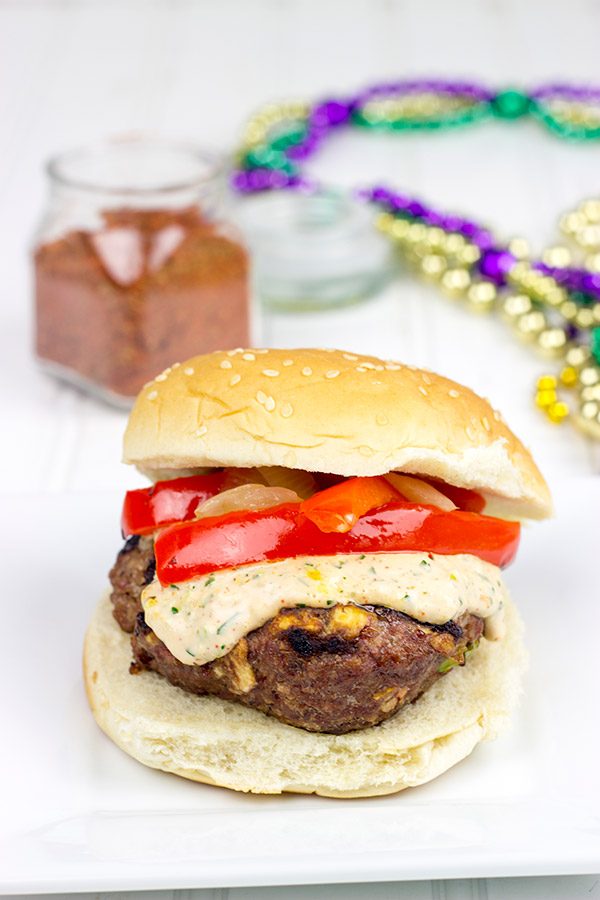 Every summer, my wife’s family gets together in northern Maryland for “crab weekend.”  It’s essentially a huge summer picnic with all of the extended family, and there are usually well over 25-30 people there for the day.  But the crabs are the real highlight of the trip.  Well, they are the real highlight for everyone but me.  I don’t dislike crabs, but I also don’t go crazy over them either.  If you want to see a real fireworks display, then just tell my wife’s family that there aren’t any crabs left.  The store lost the crab order last year, and you would’ve thought the world was about to come to an end.
So while the rest of the family is fighting over crabs, I usually man the grill.  It’s hard to beat some delicious hotdogs and hamburgers when it comes to summer picnics!  But this year was different.  In addition to all of the crabs, we managed to pick up some crawfish as well.  I haven’t had crawfish in years! 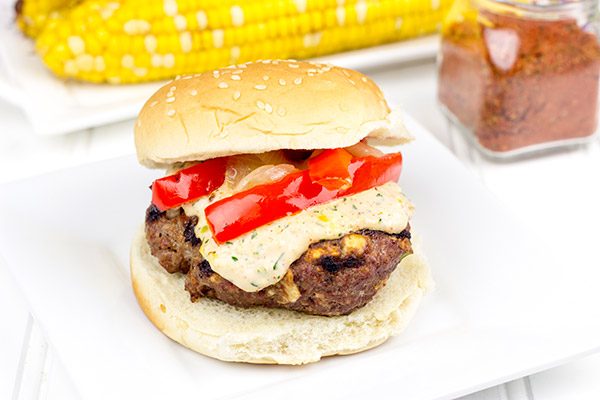 I became addicted to crawfish boils when I lived in south Louisiana.  Crawfish boils meant instant parties.  But it’s been years since I lived down there, and crawfish boils aren’t too popular in upstate New York.  Imagine that.  (By not popular, I mean that crawfish are pretty much non-existent this far north.)  So the fact that we were able to get some crawfish for our summer picnic was pretty much the greatest surprise ever!

Even though I can’t get crawfish way up here in New York, that doesn’t stop me from eating all sorts of delicious Cajun food.  As you guys know, I love to grill.  Summer time means grilling time in our house.  I recently got a new grill, and I decided the best way to break that bad boy in was with some delicious Cajun-inspired burgers.  It’s summertime.  Burgers are a requirement!  But these aren’t just burgers.  They’re burgers amped up with all sorts of Cajun awesomeness. 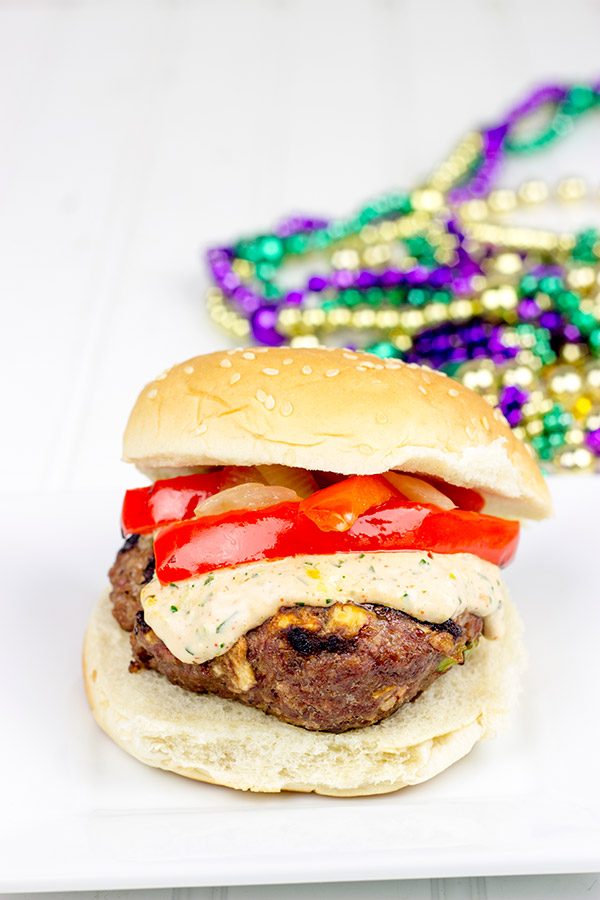 But the real crown jewel of these Spicy Cajun Burgers is the remoulade sauce on top.  Remoulade is a common ingredient in Cajun and Creole cuisine.  While it’s usually used on fried catfish (or crawfish) po’ boys, I decided to use it on these burgers.  Woah.  These burgers were amazing.  Let’s just say they were the perfect way to break in the new grill! 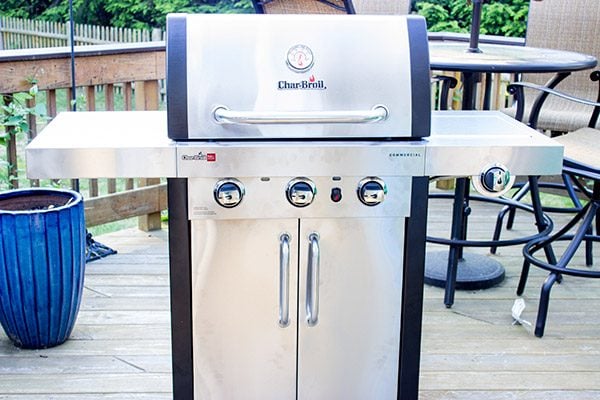 So what is this new grill that I keep mentioning?  Well, it’s none other than a Char-Broil Commercial Series Grills.  Char-Broil has been revolutionizing the grilling world ever since they launched their first charcoal grill back in 1948, and this new gas grill certainly lives up to the Char-Broil name.  If you want to check one out for yourself, then swing by your local Lowe’s store. 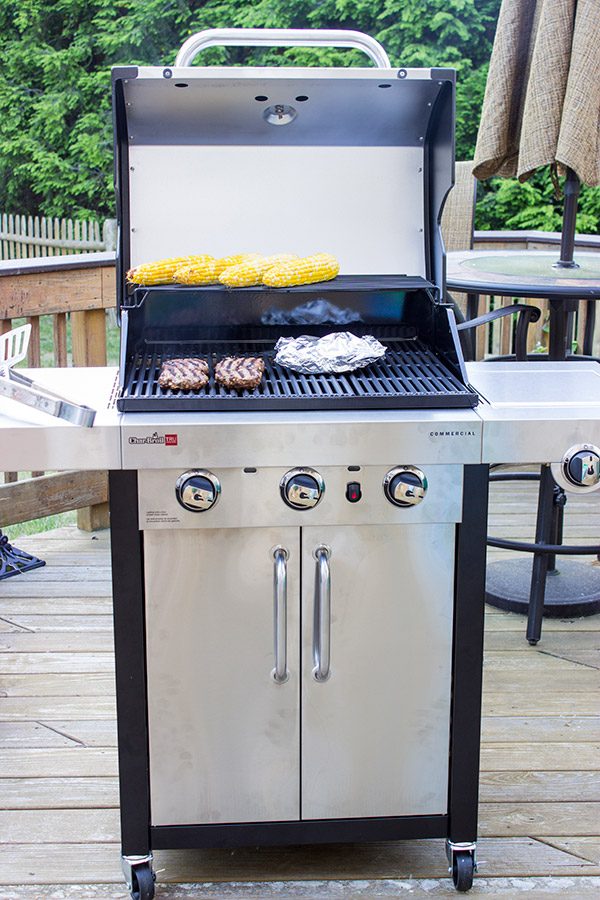 This grill features the patented TRU-Infrared cooking system (Learn more about Char-Broil’s infrared technology) which delivers heat evenly across the entire cooking surface.  What does that mean?  It means this grill uses 30% less fuel than a traditional grill.  It also means no more hot and cold spots on your grill.  I’ve definitely experienced this before.  I was grilling several ears of corn at a friend’s house one night.  One half of one ear must have been over a hot spot of the grill.  Let’s just say that corn was “extra-seasoned” by the time it came off the grill.  (Just for the record, burnt corn isn’t very tasty at all.)
The TRU-Infrared™ cooking system also allows you to cook at higher temperatures without any flare-ups.  This in turn leads to juicy food and restaurant-quality results…all on your own back porch!  (I mean look at the sear marks on those burgers!)  And thanks to the innovative design, you can add wood chips directly on top of and in between the cooking grates.  I don’t know about you, but I’m a huge fan of using wood chips when I’m grilling.  They’re an easy way to bring tons of flavor to whatever you are grilling! 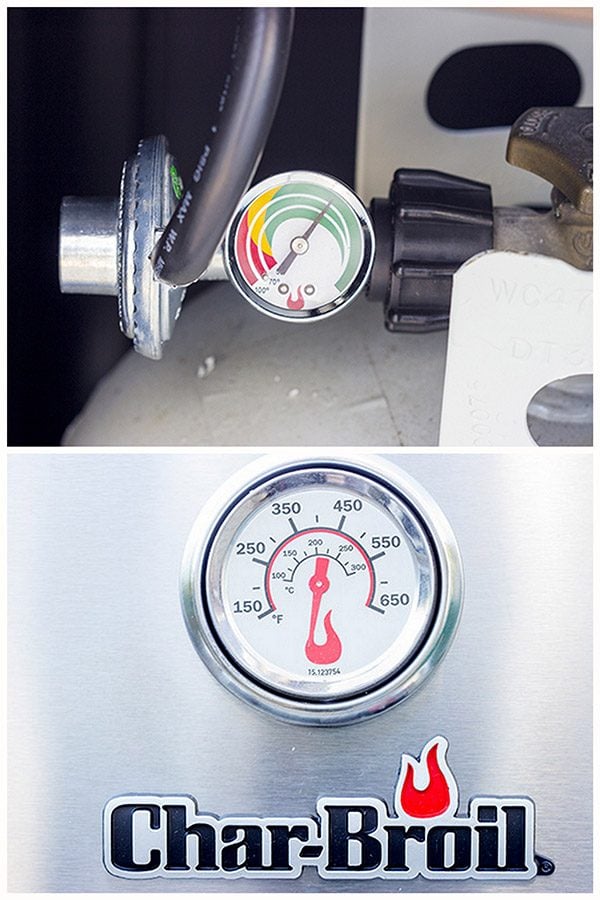 In addition to the TRU-Infrared cooking system, this Char-Broil Commercial Series™ Grill also includes a number of other perks to make back porch grilling easier.  There’s a sideburner which is awesome for preparing a complete meal outdoors.  Last weekend, we put a pot of water on the sideburner and boiled some potatoes right there to go alongside our meal.  There’s also a gauge on the propane line that lets you know how much propane is left in your tank.  If you’ve ever been half-way through grilling only to run out of propane, then you know how valuable a gauge like this is!  (Trust me, I’ve been there.  Nothing like running out to the store to get more propane while your half-cooked food hangs out on the grill.) 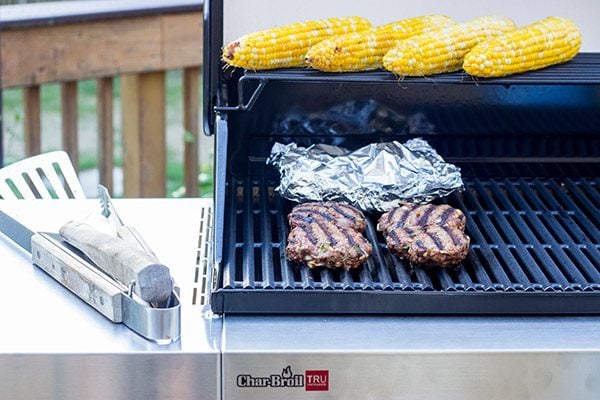 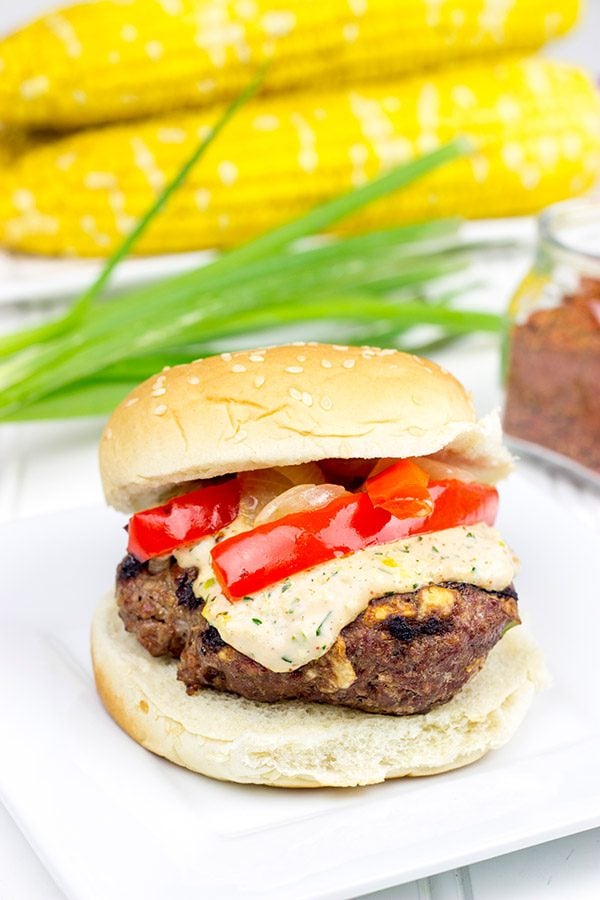 Did you make these Spicy Cajun Burgers at home?  Leave a comment.  Or snap a photo and tag me on Instagram (@Spicedblog)!  Happy grilling!

Looking for more delicious burger ideas?  Check out these other favorites, too: 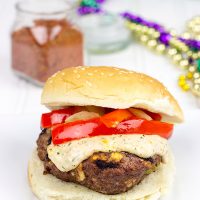 Loaded with Cajun flavor and topped with a remoulade sauce, these Spicy Cajun Burgers are sure to be a hit at your next backyard picnic!
Print Pin Rate
Prep Time: 20 minutes
Cook Time: 20 minutes
Total Time: 40 minutes
Servings: 4 burgers
Calories: 697kcal

For the Cajun seasoning