Complete with brownie bites baked into this cheesecake and piled high on top,
this Brownie Bite Cheesecake is an impressive dessert to serve to company! 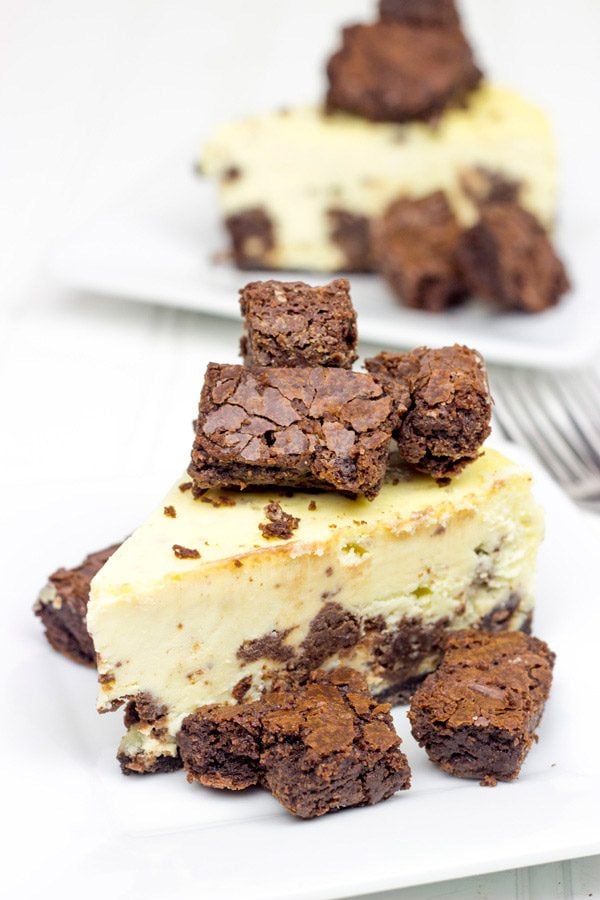 It’s one of the world’s greatest debates.  I’m not talking Backstreet Boys vs. ‘ N Sync here.  Nor am I talking about Mario vs. Luigi.  It’s all about brownies today here on Spiced!  (Well, brownies and cheesecake.  But we’ll get to the cheesecake part in a bit.)  So how do you like your brownies?  Do you like your brownies to be nice and chewy, or are you on the cakey brownie side of this battle? 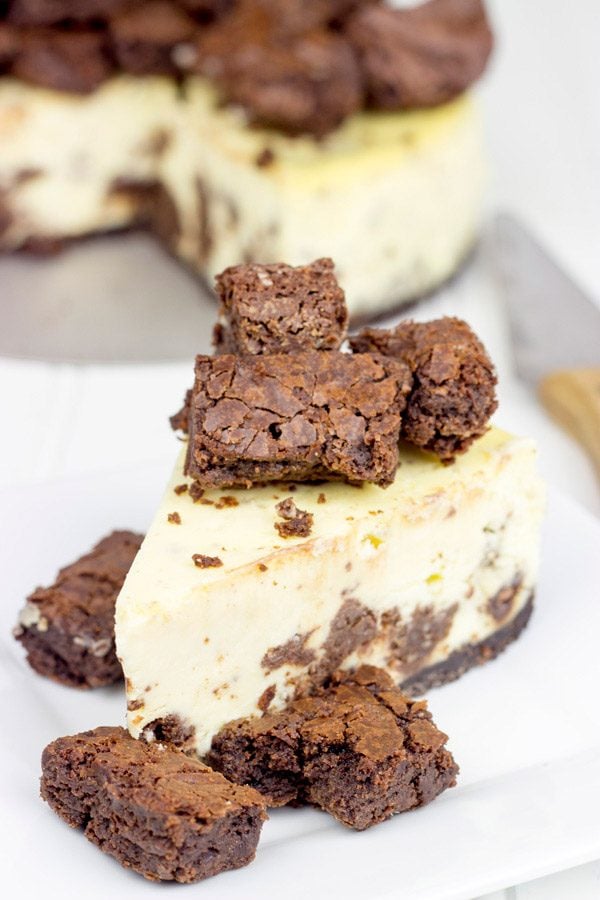 For me, I’ve always favored the corner pieces of a pan of brownies.  (I’ve also always favored the end pieces on loaves of bread.)  You can have those center pieces.  Just leave me the four corners, and I’ll be one happy camper!  But I think I may have discovered an even new favorite way to eat brownies.  That’s right…in a cheesecake!  I told my wife that I was planning on making a cheesecake, and I asked her what variety she would like.  After thinking for a moment, she came back with Brownie Bite Cheesecake. 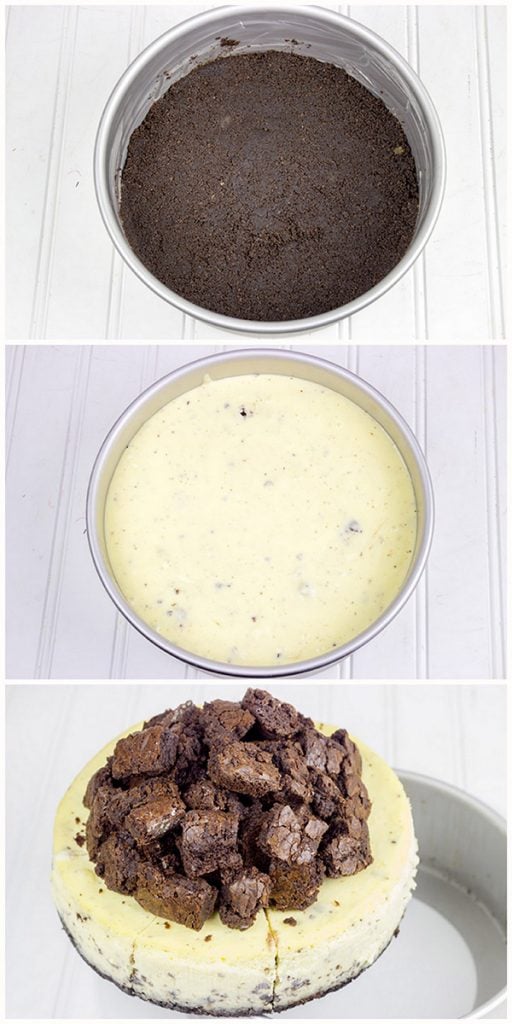 Hmm.  Brownie Bite Cheesecake, eh?  Not at all what I was expecting, but then again it sounded like a great idea!  The gears in my brain starting turning (they were a bit rusty, so it was slow going), but I realized that I could make a pan of thin brownies.  Then just fold half of those brownies into the cheesecake batter.  The other half could get piled on top.  Ok, maybe the other half minus the few that I snacked on.  Oops.  (I know you nibble when you make recipes, too.  Don’t lie.) 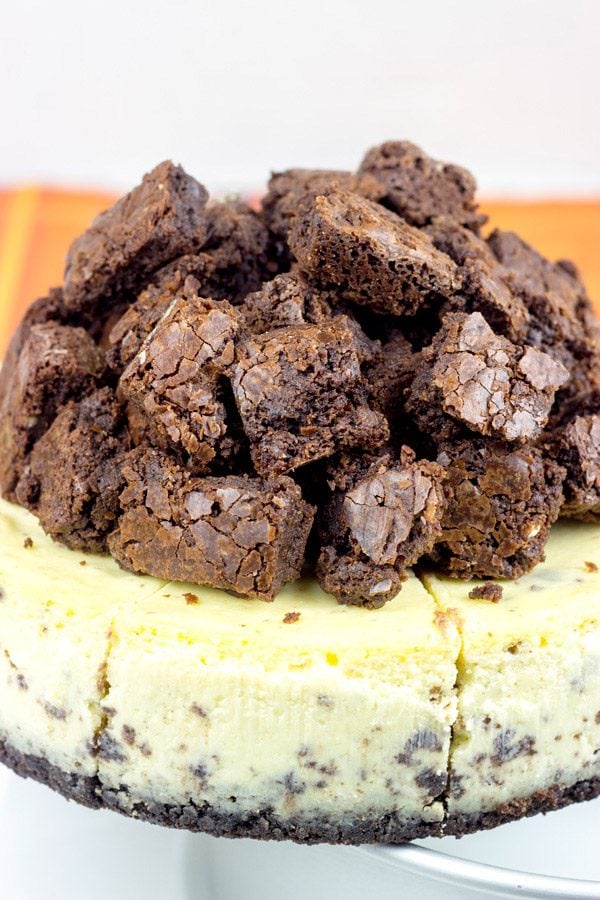 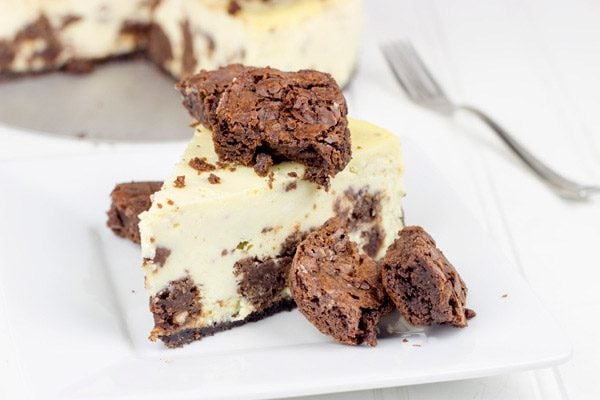 But let’s talk about baking cheesecakes for a minute.  I knew they are a bit more challenging than a standard cake.  Cheesecake ingredients are pricey.  And then there’s the whole baking them in a water bath thing.  Sounds like a pain, huh?  Not at all!  Here’s a couple of easy tips that I’ve picked up over the years: 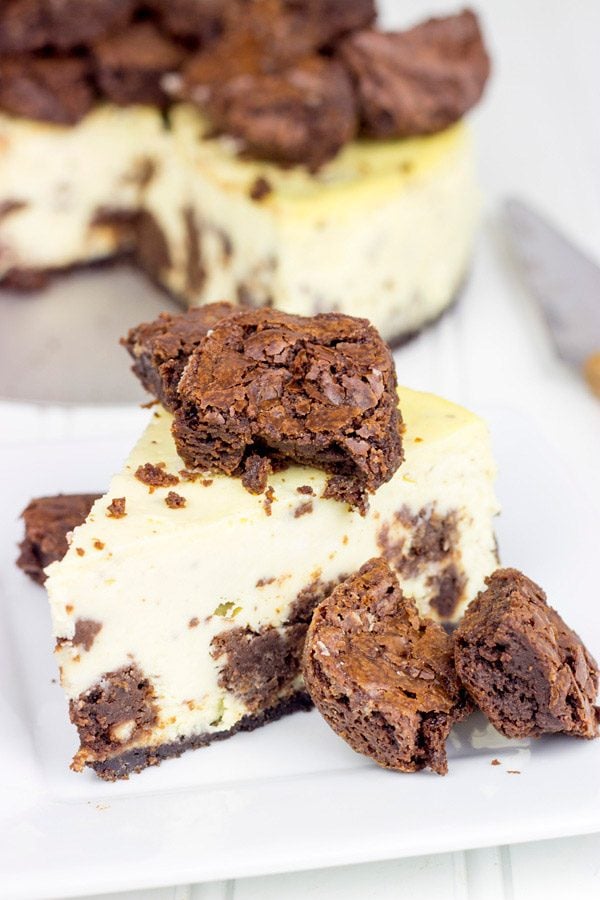 Ok, enough of the nerdy tips on how to bake the perfect cheesecake.  Let’s turn our attention back to this tasty Brownie Bite Cheesecake!  This bad boy is the perfect way to satisfy both chocolate fans and cheesecake fans.  Not only are there brownie bites piled on top of the cake, but there are bites hiding in the cake as well.  So here’s to delicious desserts and perfectly chewy brownies!

What is your favorite type of brownie?  Have you ever put brownies inside of a cheesecake?  (If not, go do it.  #TrustMe) 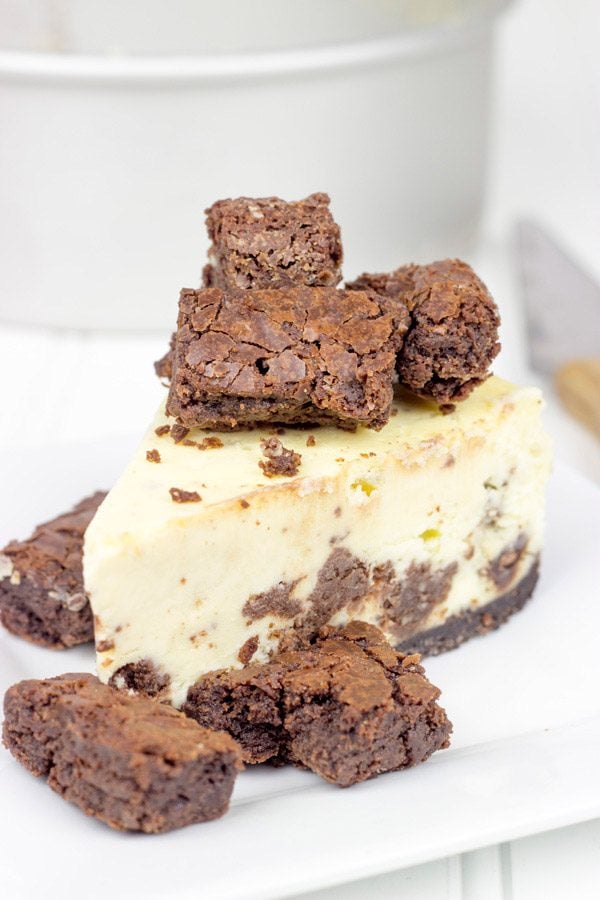 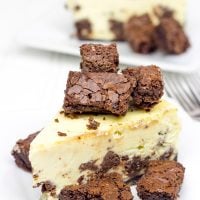 For the Brownie Bites

For the Brownie Bites