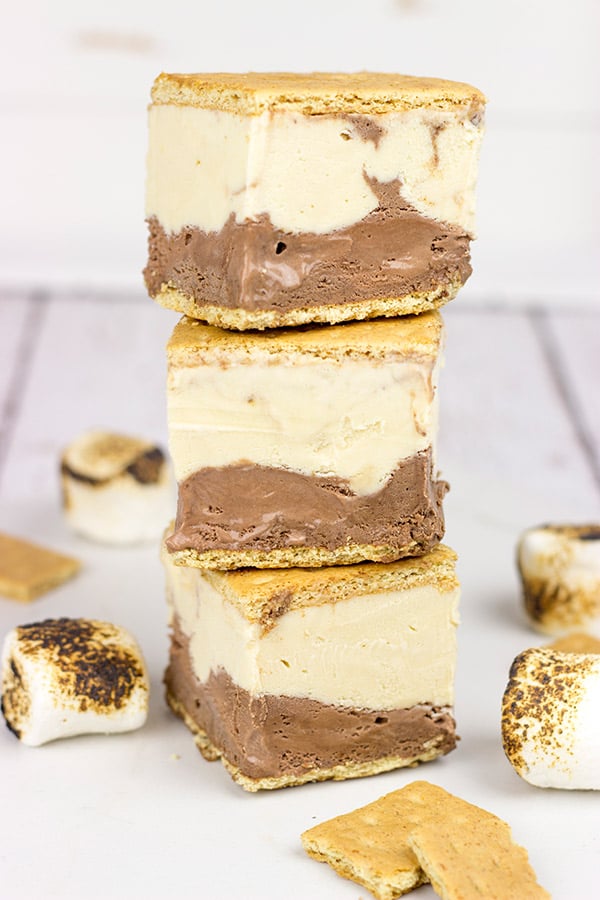 It’s time to finally let the cat of the bag.  I’ve had this idea floating around in the back of my head since about January.  In fact, I think this idea hit me when I was bundled up in 5 layers of winter clothes and shoveling snow off my front walk.  I’d lost feeling in my toes about 10 minutes before, and I was pretty sure that my nose was frozen solid…then it hit me.  S’mores.  I wanted s’mores.  (Perhaps that was my subconscious pleading for the summer and a backyard campfire…)  However, since I was surrounded by ice at the time, my brain decided to merge the s’mores with the ice and come up with these S’mores Ice Cream Sandwiches.  I’ll admit that the thought of eating anything frozen in mid-January wasn’t terribly appealing…but now it’s July, and I welcome frozen desserts! 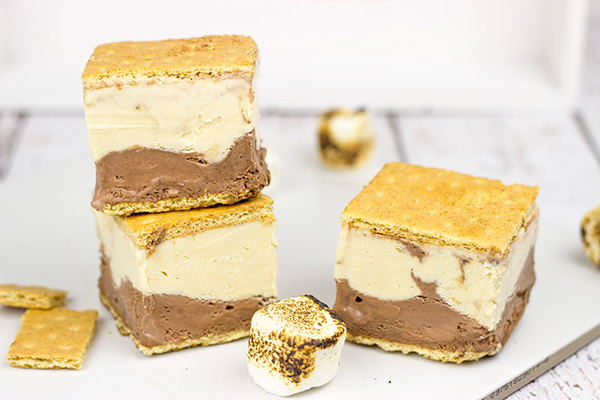 So once the winter began to thaw, I set out to create these S’mores Ice Cream Sandwiches.  I wasn’t exactly sure how to do it, but I knew the flavors needed to include chocolate, toasted marshmallow and graham crackers.  That’s when it hit me.  Make chocolate ice cream.  Make toasted marshmallow ice cream.  Sandwich those two between a couple of graham crackers.  Bad-a-bing, bad-a-boom…that’s it…time to set this plan in motion!

You may have noticed that I made this decadent Homemade Chocolate Ice Cream a couple of months ago.  Then I followed it up with this Toasted Marshmallow Ice Cream.  Well, that wasn’t completely random, folks!  Put those two together, and you’ve almost got these S’mores Ice Cream Sandwiches.  A pack of graham crackers and a couple of hours in the freezer later, and you’re all set.  If you’re looking to speed up the process a bit, you could certainly use store-bought chocolate ice cream.  (You’ll probably still need to make your own toasted marshmallow ice cream, though.  That’s ok…homemade ice cream is incredible, and I’m usually hunting for any and all excuses to make another batch!) 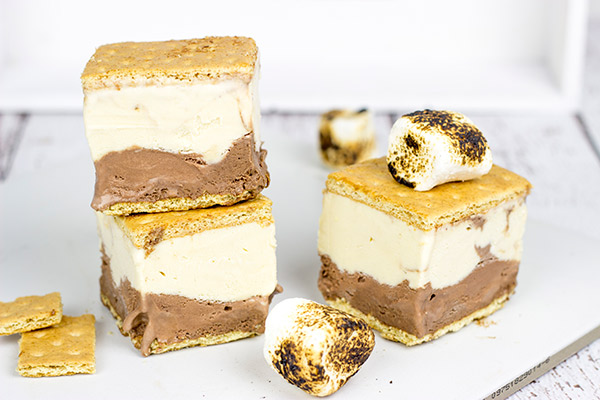 Unlike traditional s’mores, I don’t recommend toasting these bad boys over the campfire…I think the results could be somewhat disastrous.  So here’s to summer picnics, baseball, burgers and dogs on the grill and of course these S’mores Ice Cream Sandwiches for dessert! 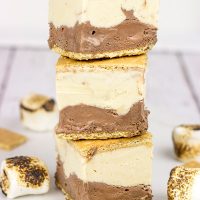