I used to be a Thin Mints kinda guy.  Each spring when coworkers would bring in order forms for Girl Scout cookies, I would always stock up on Thin Mints.  Then I would portion those delicious treats out over the next several months.  A frozen Thin Mint truly is delicious, and I could probably eat a half sleeve of Thin Mints right out of the freezer.  However, I have decent self-control (usually), and I could usually make that Thin Mints stash last until early fall.

Then I met Laura.

Now I’m a Samoa kinda guy.  (If we’re telling the truth, I’m probably ½-Thin Mints and ½-Samoa.  I can’t just give up on Thin Mints like that!)  But Laura made me see the light when it comes to Samoas.  Shortbread cookies topped with chocolate, caramel and coconut.  They’re delicious!

On a side note, it appears that Samoas have changed their name to Caramel DeLites – well, sorta.  It turns out that the Girl Scouts use two different bakeries to make all of their cookies, and Girl Scout councils can choose which bakery to order their cookies from.  One bakery calls them Samoas.  One bakery calls them Caramel DeLites.  They are very similar cookies, although some claim that they are not quite identical.  Either way, the combination of chocolate, coconut and caramel is there.  That’s good enough for me! 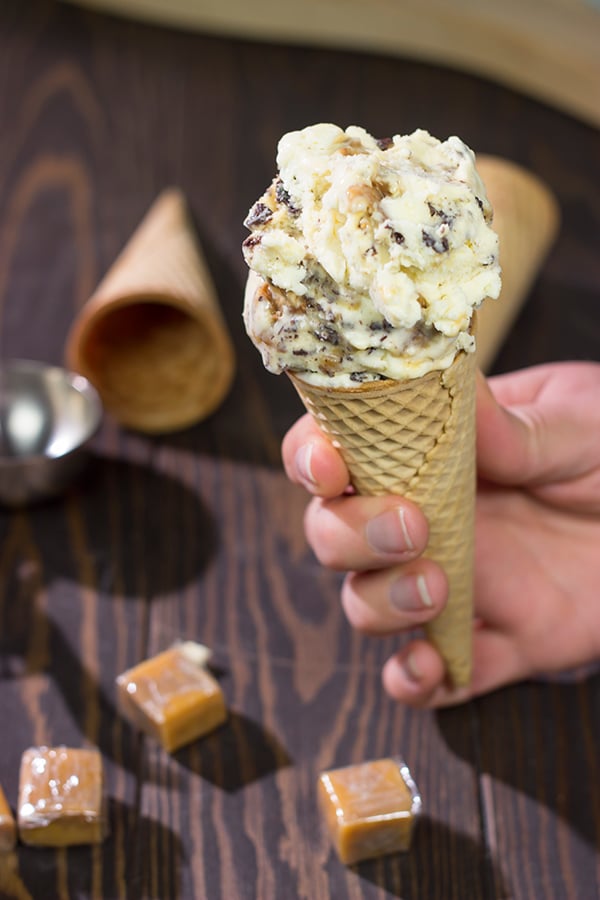 Channeling those chocolate, coconut and caramel vibes, I decided to put a Samoa twist on homemade ice cream.  I certainly could’ve just chopped up some Samoa cookies and mixed ’em into vanilla ice cream.  I’ve been doing that for years with Oreos.  Delicious.  But that assumes I will have Samoas on hand, and that’s a risky assumption – especially with a Laura and a Robbie in the house.

Instead, I started with my vanilla ice cream recipe as a base and then added in a coconut-caramel topping and melted chocolate.  All of the flavors of those beloved Girl Scout cookies…in ice cream form!

If you’ve never made homemade ice cream, then you really should give it a try.  The only problem is that the ice cream is soft (think soft-serve style) when it comes out of the ice cream maker.  It’s difficult to avoid eating the entire batch right then and there!

One thing I noticed about this Samoa Ice Cream is that it needed extra time in the freezer.  Adding in the melted caramel topping + the warm chocolate caused the ice cream to melt a bit.  (Shocking, right?)  As a result, this ice cream needed a few extra hours in the freezer before it was firm enough to scoop for these ice cream cones.  The wait was challenging, but I think it was worth it.  This Samoa Ice Cream is delicious…and it’s a fun way to celebrate the 2nd most popular Girl Scout cookie.  (Yes, Thin Mints are still the most popular.)

Did you make a batch of this Samoa Ice Cream at home?  Leave a comment, or snap a photo and tag me on Instagram (@Spicedblog) – I’d love to see your version! 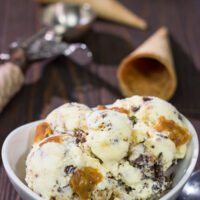 To save time, you could use a store-bought caramel sauce, but I recommend still stirring toasted coconut into the sauce before adding it to the ice cream.

Looking for more Samoa inspired recipes?  Check out these other favorites, too: