Looking for some tasty comfort food? Pull out the slow cooker and make a batch of this Slow Cooker Chicken Tikka Masala! It’s delicious!

It’s that time of the year. It’s comfort food season. Truth be told, comfort food season exists all year long as far as I’m concerned. A good burger on the backyard grill on a Saturday night is pretty darned fantastic! However, as summer grilling season begins to wind down, we turn our attention to indoor comfort food. And that’s when Laura starts asking me to make Chicken Tikka Masala.

Laura has always loved Indian food. For me? Not so much. However, I will admit that Indian flavors are growing on me. A bite here and a nibble there turned into wanting more. And now I crave that Chicken Tikka Masala as much as Laura. She puts that recipe in her top 3 favorites of all time – that’s pretty legit!

As I was making that recipe, I realized it was the perfect candidate for a slow cooker recipe. Any recipe which calls for a sauce to be simmered on the stove can usually be transitioned over to a slow cooker. Sure enough – this Slow Cooker Chicken Tikka Masala was a huge hit in our house! In fact, Laura asked me to make her a triple batch and freeze it in individual lunch-sized containers. That’s not a bad idea!

While this Slow Cooker Chicken Tikka Masala does indeed use the slow cooker, it still requires a bit of prep work on the stovetop. Most importantly, the chicken gets seared for a couple minutes which adds more flavor. The onions and garlic also get sautéed a bit, too. So if you’re willing to put in a little work around midday, then you can turn things over to the slow cooker after that. And come dinner time? That sauce will be perfect for spooning over rice!

The funny thing about Chicken Tikka Masala is that it actually more British than Indian. This recipe is thought to be a variation of butter chicken that was created by immigrants to Britain in the 1960s. All I know is that it’s delicious, and it’s one of the first indoor comfort foods we crave when the seasons start to change!

The ingredient list for this Slow Cooker Chicken Tikka Masala looks a bit long, but most of the ingredients are fairly normal. As with many Indian dishes, there is a whole assortment of spices in the recipe. But that array of spices really comes together to create an amazing taste.

If you’re looking for some delicious comfort food, then pull out the slow cooker and make this recipe. Laura says this version is better than any Chicken Tikka Masala that she’s ordered at a restaurant – that says something! Happy slow cooking, my friends!

Did you make this Slow Cooker Chicken Tikka Masala at home? Leave a comment, or snap a photo and tag me on Instagram (@Spicedblog) – I’d love to see your version! 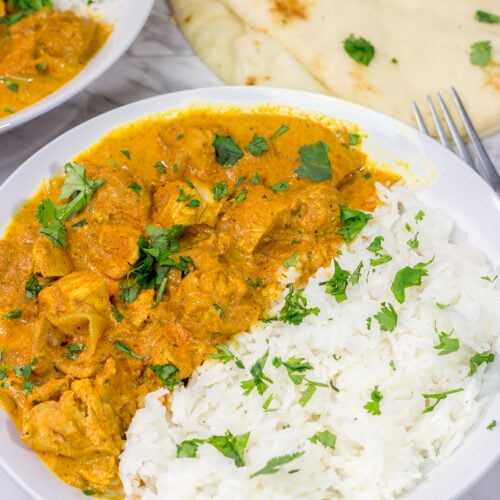 Looking for more tasty slow cooker recipes? Check out these other favorites, too: