This Cajun Shrimp Etouffee is a favorite in south Louisiana…
and a great way to celebrate Mardi Gras! 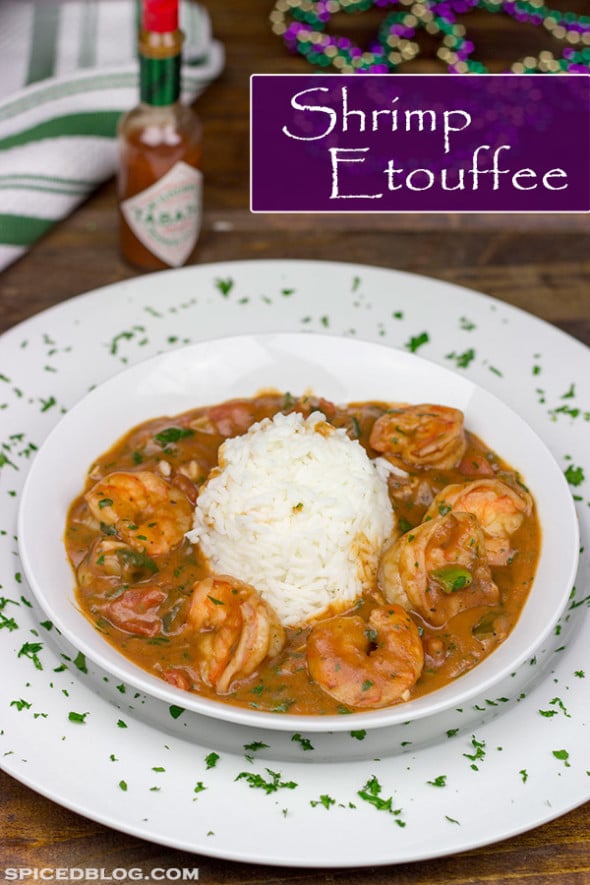 With Mardi Gras quickly approaching, I’ve really been craving Cajun and Creole food like you wouldn’t believe!  Etouffee is one of my favorite Creole-style comfort foods, and since it’s been unbearably cold this winter, I  decided to whip up a batch for dinner.  Before moving to Louisiana a number of years ago, I’d never really heard of etouffee.  I didn’t even know how to pronounce it (it’s ay-too-fay in case you’re wondering).  Perhaps I had seen it on the menu at a Cajun/Creole restaurant, but I had no idea exactly what etouffee was.  But after living in south Louisiana for a few years, I couldn’t help but develop a taste for etouffee!  And the best part is that it’s surprisingly easy to make.  This recipe can be made with any type of shellfish, and crawfish etouffee is by far the most popular down in Louisiana.  But seeing as how I now live in upstate New York, crawfish tails aren’t exactly easy to come by.  Sure, I can order them online, and I often do try to keep some in the freezer for a special meal.  I was all out of crawfish, so I went with shrimp this time…and it was really tasty!  (I’ve also seen recipes with crab, but I’ve never actually tried crab etouffee.)

I find that a lot of folks fear Cajun and Creole cuisine because they don’t like spicy foods.  Spicy doesn’t necessarily mean burn-your-tongue-off hot.  I’m not sure where the misconception came from that pouring cayenne pepper on a dish all of a sudden makes it Cajun.  This Shrimp Etouffee recipe doesn’t even call for cayenne pepper.  (Of course, you could add some if you like heat…but I often don’t use cayenne in this dish.)  I do, however, use a creole seasoning, and cayenne is one of the many spices that go into this blend.  But I find that most creole seasonings will not burn your mouth off.  (Just make sure to taste a little bit before adding it to the recipe, and then just adjust the amount to your own personal taste.)  I typically end up serving this Shrimp Etouffee with a bottle of hot sauce…that way people can add as little or as much heat as they want. 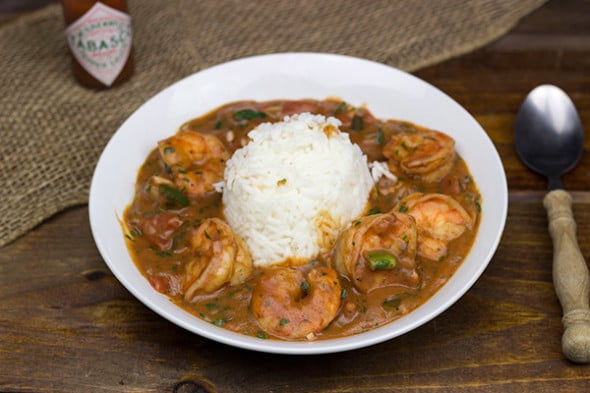 The real flavor for this etouffee starts with making a roux.  If you’ve never made a homemade roux before, don’t be afraid of it!  It’s just butter (or oil) and flour cooked on a very low heat for about 20-25 minutes.  The catch is that you’ll need to stir the roux quite often to keep the flour from burning.  You can keep working on other things in the kitchen and just frequently stir the roux, but you can’t exactly wander off.  And make sure the heat is on low!

The next layer of flavor comes from sauteing the diced onion, celery, and bell pepper in the cooked roux.  (Like most Louisiana dishes, this Shrimp Etouffee uses onion, celery, and bell pepper as the base…aka “the Holy Trinity of Cajun Cooking.”)  After that, just toss in some tomatoes, spices, and shrimp…and you’ve got a delicious, authentic Creole dish that’s perfect for celebrating Mardi Gras!

I have some more Louisiana-inspired recipes coming in the next couple of days, but in the meantime, check out this Chicken and Sausage Gumbo and this Cinnamon King Cake! 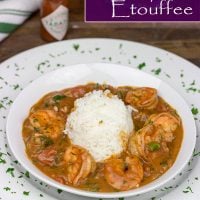 For the Shrimp Stock

For the Shrimp Etouffee

For the Shrimp Stock

For the Shrimp Etouffee

Instead of making your own shrimp stock, you can substitute canned shrimp or seafood stock instead.