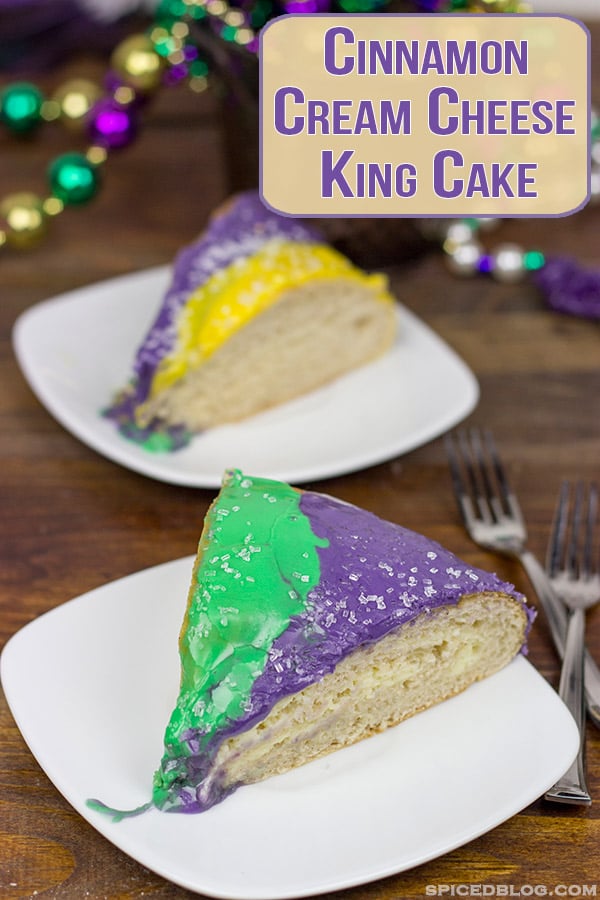 Mardi Gras is just around the corner, and it’s time to celebrate!  If you’ve never been to Mardi Gras, then you probably have a very specific image in your head of what happens during this festive celebration.  That image probably involves lots of alcohol, beads, and girls who have misplaced their shirts.  But as my blog buddy Graham from Glazed & Confused points out, there is so much more to Mardi Gras than the debauchery which we see on television. For starters, Fat Tuesday is a state holiday in Louisiana, and it’s a chance to celebrate with family and friends before Lent begins the next day.  (Seriously.  For most of New Orleans, Mardi Gras is a family holiday.  Bourbon Street is the only place where things really get crazy.)  Since it’s customary to give up a favorite food or two for Lent, Mardi Gras is the last chance to enjoy those rich foods for a while.  And what better way to celebrate the carnival season than with a Cinnamon Cream Cheese King Cake? 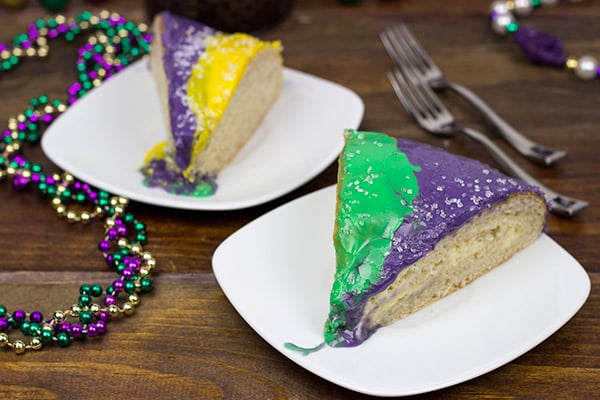 This Cinnamon Cream Cheese King Cake is a light brioche-style dough filled with cinnamon-flavored cream cheese.  Once the whole thing is baked, then it’s topped with a simple icing in the traditional Mardi Gras colors of green, purple, and yellow.  (I also threw some sanding sugar on top just to give it an extra sparkle.)  When I lived in Louisiana, I had easy access to a number of bakeries which made some really delicious king cakes.  I might have even ordered a king cake for my birthday one year.  (And my birthday is in July.) 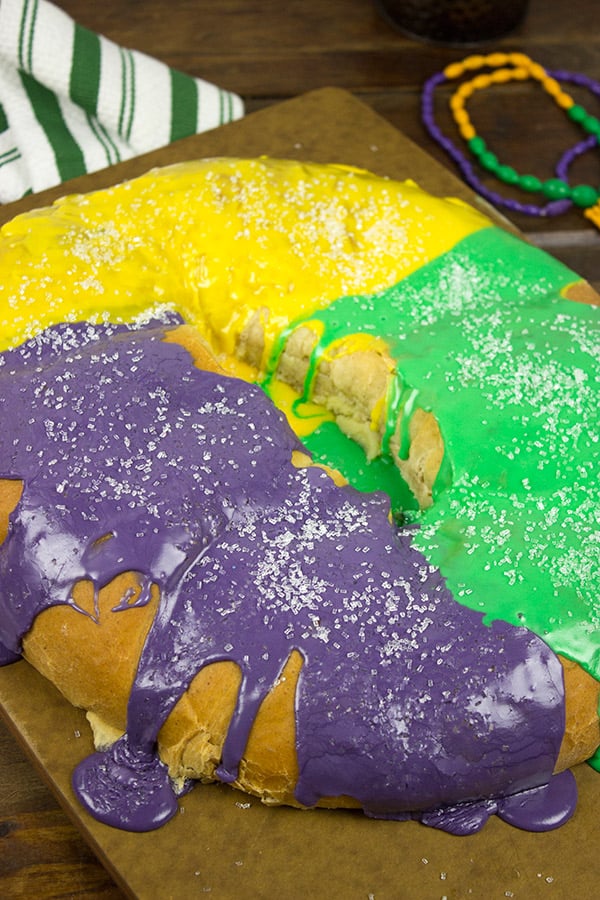 After I left Louisiana, however, king cakes were hard to come by.  Heck, most of the bakeries up here in upstate New York have never even heard of a king cake!  So I set about making my own version…and after many attempts, I finally landed on something I’m proud of.  To be honest, though, this Cinnamon Cream Cheese King Cake isn’t my favorite.  I’m not saying it isn’t tasty…my wife loved this version!  It’s just that I prefer my king cakes without cream cheese.  To be fair, cream cheese danishes never really call to me, either…so it’s no surprise that I prefer my king cakes sans cream cheese filling.  (If you’re looking for a plain Cinnamon King Cake, check out this post here.)  Whether you go with the cream cheese filling or opt for the plain cinnamon version, a king cake is a great way to celebrate the Mardi Gras season!

For the King Cake

For the Cinnamon Cream Cheese Filling

For the King Cake

For the Cinnamon Cream Cheese Filling