This Corn Maque Choux with Smoked Andouille Chicken Sausage is a classic southern Louisiana dish.  It might be difficult to pronounce, but it’s easy to make…and it’s delicious, too!

Disclosure: This Corn Maque Choux with Smoked Andouille Chicken Sausage post was sponsored by al fresco, but the recipe and opinions are entirely my own. Thank you for supporting the brands that support Spiced! 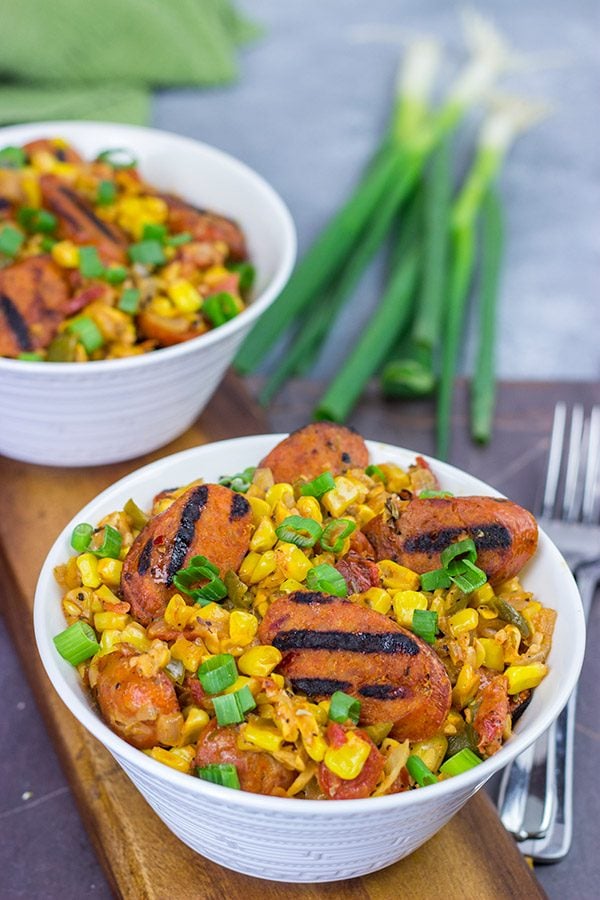 A couple of weeks ago, I had the opportunity to return to my roots.  Well, sorta.  While I grew up in the Carolinas, I lived in south Louisiana for a while after college, and I credit that area with expanding my interest in food.  You can’t help but love delicious food when you live in south Louisiana!

I spent almost a week in New Orleans, and I ate like a king every single day.  In fact, I took a foodie tour of the French Quarter one afternoon where we got to sample tasty bits and bites from 6 different places.  If you’ve never been to New Orleans, then go.  Seriously.  It’s an amazing city, and I love wandering around the side streets around the Quarter.  (You gotta see Bourbon Street when you go to New Orleans.  So go see it, then go wander the side streets instead!) 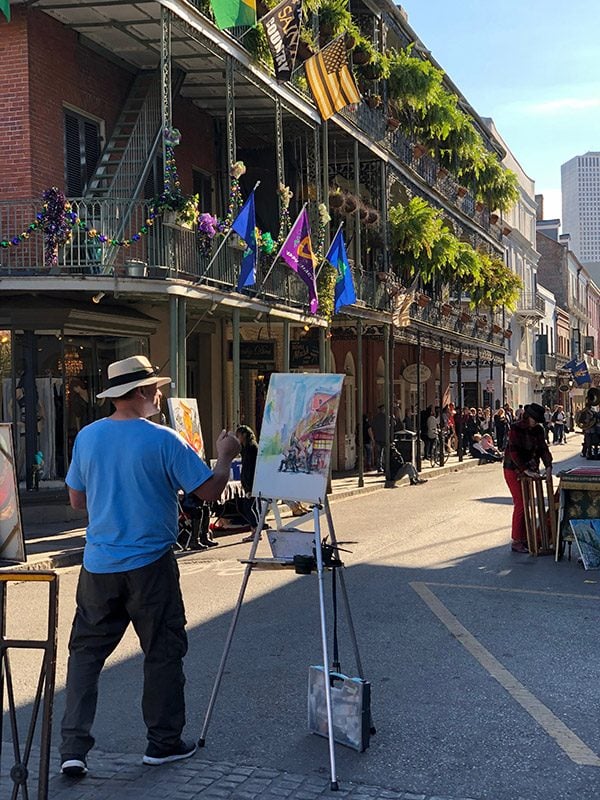 On the food tour, we got into a really fascinating discussion about the differences between Cajun and Creole.  These terms are often used interchangeably, but they are actually unique.  Both Cajun and Creole styles of cooking include French, Spanish, American Indian and African influences.  After all, New Orleans is a real melting pot of cultures thanks to its history.  The primary settlers in the area – the Acadians – were French outcasts who migrated to the Maritime Islands in Canada only to be outcast again to south Louisiana.  Gumbo is Louisiana’s version of the French bouillabaisse, and jambalaya is Louisiana’s adaptation of the Spanish paella.

Creole cuisine is often described as “city food” while Cajun is described as “country food.”  In a nutshell, this is pretty close.  The Creole style came about largely as a result of wealthy European families who settled in the area.  These French and Spanish families had their own chefs, and the Creole style of cooking emerged when these chefs adapted their recipes to local foods and influences.  (That’s where the American Indian and African elements come into the picture.) 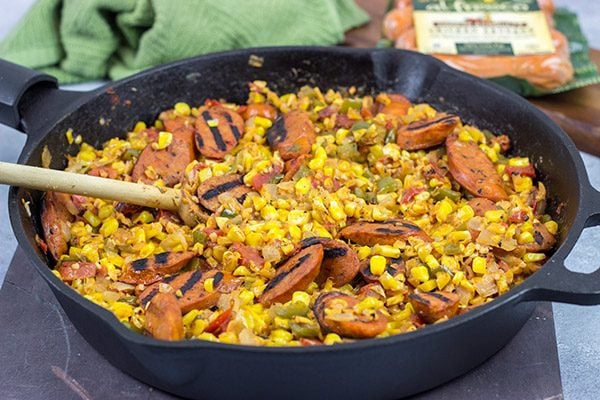 Cajun food on the other hand comes more from the southwestern part of the state…so a couple hours west of New Orleans.  The settlers in this area – the Cajuns – had to adapt their cooking styles to the availability of local ingredients.  However, the food markets in the city of New Orleans had many ingredients that just weren’t available out in the country.  The Cajuns applied their French background to the local ingredients available in the swamps and bayous of south Louisiana.  For this reason, wild game, fish and shellfish play a larger role in Cajun cooking as compared to Creole cooking.  Cajun families were often poor, and rice was commonly used to stretch recipes for an extra day or two.  To this day, many Cajun recipes still feature rice as a base. 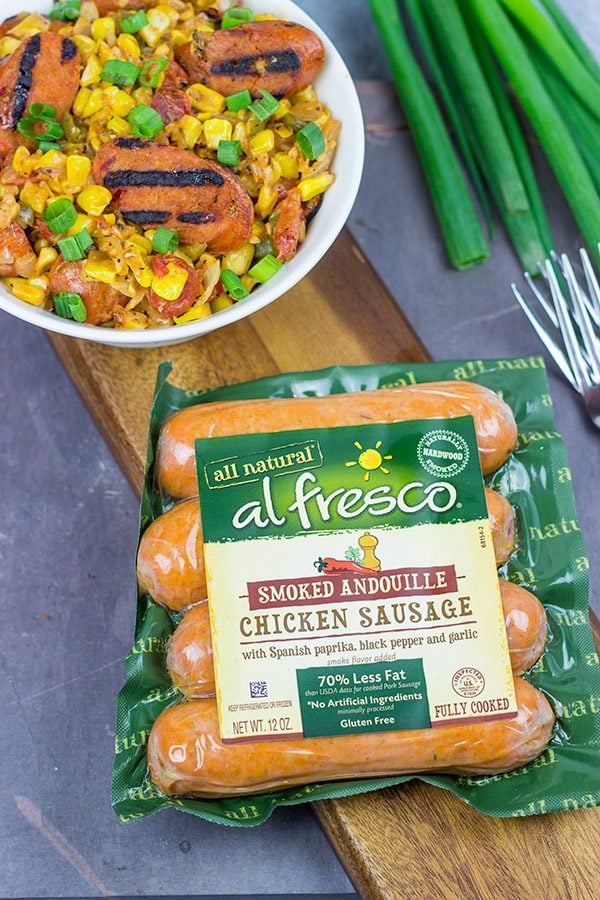 Phew.  Have I thoroughly confused you yet?  Cajun and Creole styles of cooking are indeed similar, but there are unique differences in there, too.  This recipe for Corn Maque Choux with Smoked Andouille Chicken Sausage probably leans a bit more to the Creole side with a heavy American Indian influence.  Pronounced “mock shoe,” Corn Maque Choux is one heck of a delicious (and easy) recipe!  Delicious + easy?  Sign me up!

Andouille sausage plays a key role in many Cajun and Creole dishes.  In fact, we always keep a couple packages of Andouille sausage in the freezer for whenever I feel the need (or craving) for some good south Louisiana food!  Fortunately for me, Andouille sausage has become much easier to find in stores (even way up here in upstate New York), and al fresco’s Smoked Andouille Chicken Sausage is one of my favorites.  This sausage is made with lean chicken so it includes 70% less fat and 30% less sodium than pork sausage.  (al fresco makes 10 flavors of fully-cooked chicken sausage, and they’re perfect for making easy weeknight dinners!) 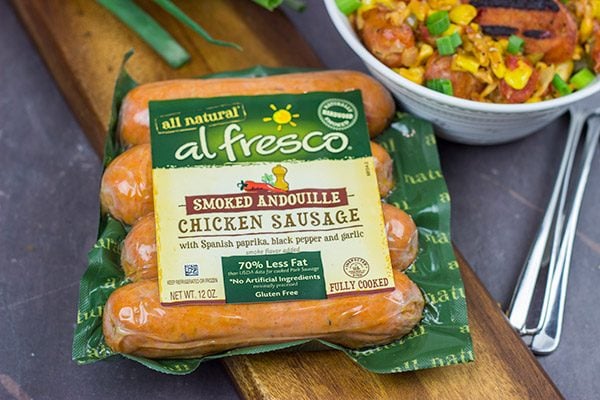 Speaking of easy dinners, I used al fresco’s Smoked Andouille Chicken Sausage to make this Corn Maque Choux.  As the name implies, corn plays a key role in this dish, and fresh corn is preferable when available.  However, given the foot of snow outside right now, fresh corn isn’t front and center in our grocery store right now.  Here’s a pro tip for making Corn Maque Choux in the winter: frozen corn on the cob.  Instead of using ‘regular’ frozen corn, grab the package of frozen corn on the cob instead.  Thaw that corn and slice it off the cob at home.  You’ll end up with a bit more of the ‘corn milk,’ and that provides more flavor to this recipe.

Fat Tuesday is coming up soon, and we love celebrating the Mardi Gras season by making Cajun and Creole food.  Laissez les bons temps rouler!  (That’s Cajun French for ‘Let the Good Times Roll.’)  So use the product finder on al fresco’s website to find Smoked Andouille Chicken Sausage in your area.  Then pick up some frozen corn, turn on some Zydeco music and get to cookin’!  Cheers! 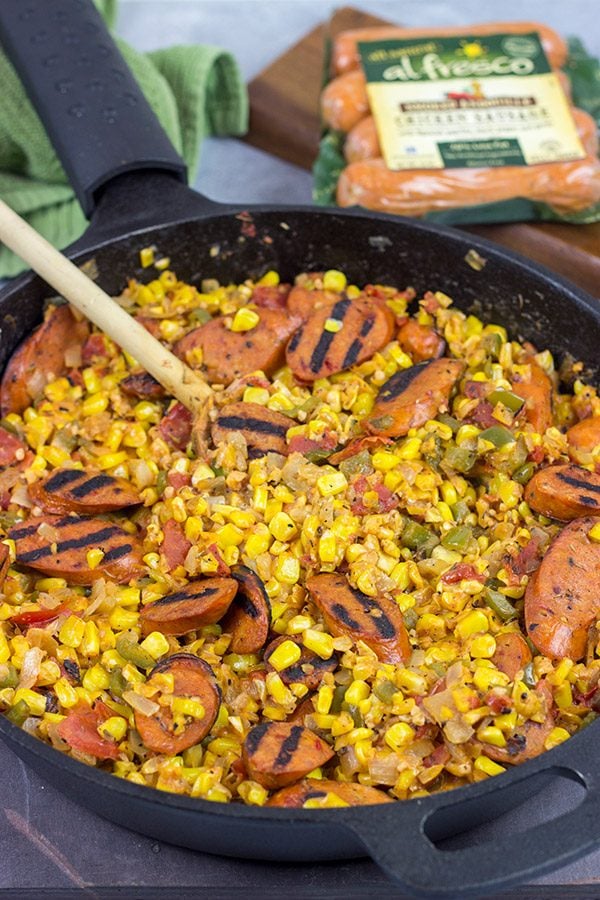 Did you make this Corn Maque Choux with Smoked Andouille Chicken Sausage at home?  Leave a comment.  Or snap a photo and tag me on Instagram (@Spicedblog)!

Looking for more tasty Cajun and Creole recipes?  Check out these other favorites: 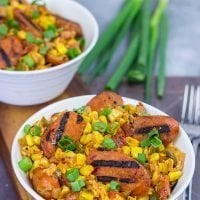