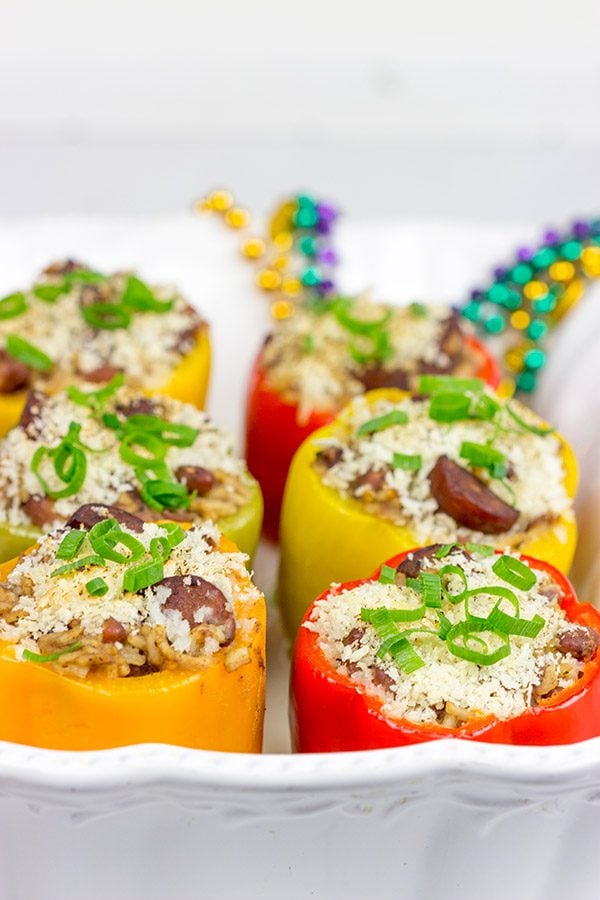 Line’s good, sweep for weight only!  Sweep!  Sweeeeep!  If these words sound even vaguely familiar to you, then chances are you’ve curled before.  Laura and I discovered curling when we wandered into the Schenectady Curling Club during the 2014 Sochi Olympics.  The club was holding an open house, and we decided to see what curling was all about.  In truth, I just wanted to tell my friends back in the South that I’d gone curling.  Turns out we got hooked on the sport, and we’ve been avid curlers ever since.  As the PyeongChang 2018 games are set to begin next week, I figured a post about curling would be appropriate.  It does look like an interesting sport, right? 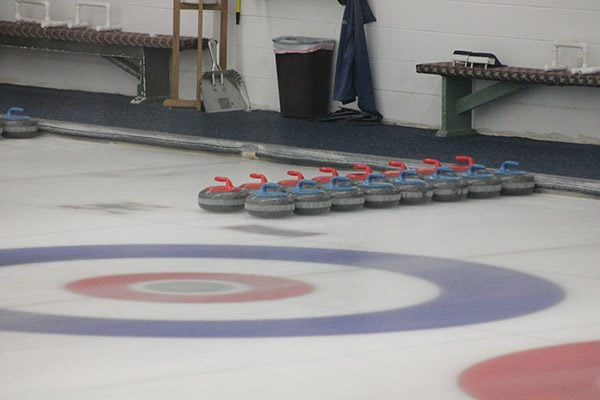 Prior to that open house a few years ago, my only exposure to curling had been on tv during the winter Olympics.  I remember watching curling as a kid.  And I remember not having a clue what the sport was about.  Does this sound familiar?  Then let me hopefully shed some light on curling.

Curling is a sport played on a sheet of ice where two teams take turns sliding stones into a set of concentric circles.  Think shuffleboard on ice.  But let me break that down a bit more.  Each team has 4 members.  There’s the skip who stands in the middle of the far circles and calls the shot while one of the other teammates “throws” (i.e. slides) a granite rock down the sheet of ice.  The stone weighs about 44 pounds, but you never actually pick the stone up from the ice.  The goal is to slide out and push the stone down the ice so that it lands in the center of the circles. 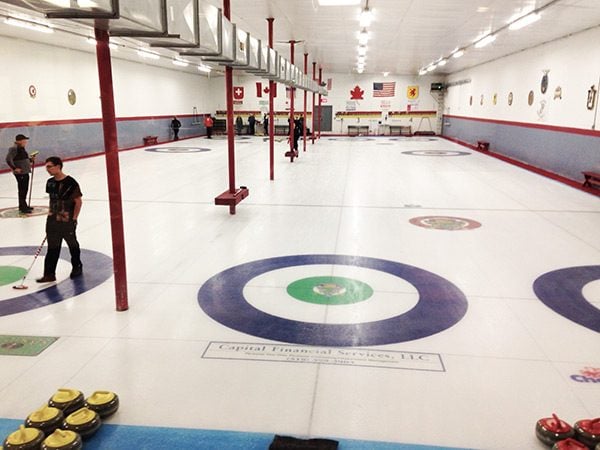 Sounds easy enough, right?  Yes and no.  Curling is a relatively easy sport to get the hang of, but it’s an incredibly difficult sport to master.  The stone naturally curls (thus the name!) as it slows down, so the skip’s job is to judge how far outside the shot should be aimed in order to have the stone land where he or she wants. 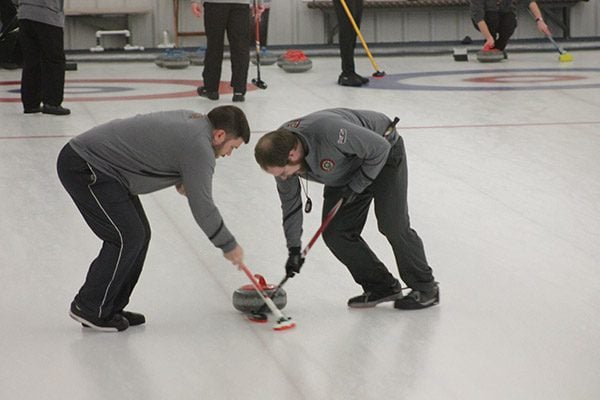 The other two teammates follow the stone down the ice and sweep as needed.  Their job is to judge the weight to determine if the stone needs sweeping in order to reach the target position.  Sweeping actually melts the very top molecules of ice, thus reducing friction and helping the stone travel a bit further.  The final score often comes down to just inches, so sweeping is very important.  But remember that whole thing about the stone curling as it slows down?  Sweeping prevents the stone from slowing, so therefore sweeping impacts how much the stone curls.  Have I thoroughly confused you yet? 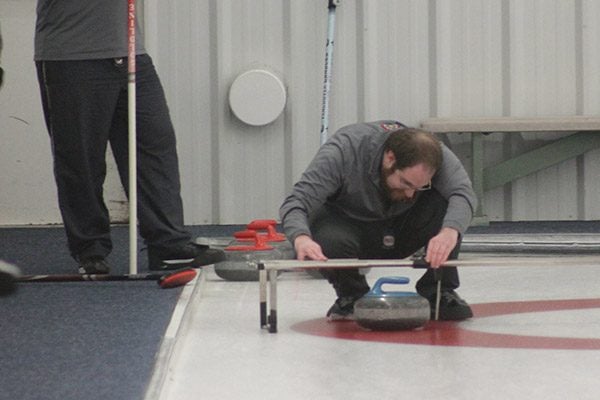 One of the questions I always get about curling is “Isn’t the ice slippery?”  Well, it is…sorta.  I mean, it’s ice.  You do have to be careful.  But the ice is slightly rough, so it’s not as slippery as you might think.  With that said, every curler has fallen at some point during a game.  It happens.  It’s usually more embarrassing than painful, though.

I could go into a lot more depth here, but I’m sure I would just bore your socks off.  Have I convinced you to at least watch curling at some point during these Olympics?  The pros are incredibly talented, and it’s fun as heck to watch their games.  Needless to say, club levels players like me miss far more shots.  The real game is having a plan B (or maybe a plan E) in place so you know what to do if (and when) a shot is missed.  In fact, the skip on my team will often call out the primary shot, but point out a desired backup shot if things go awry.  And at the club level, things go awry.  It happens. 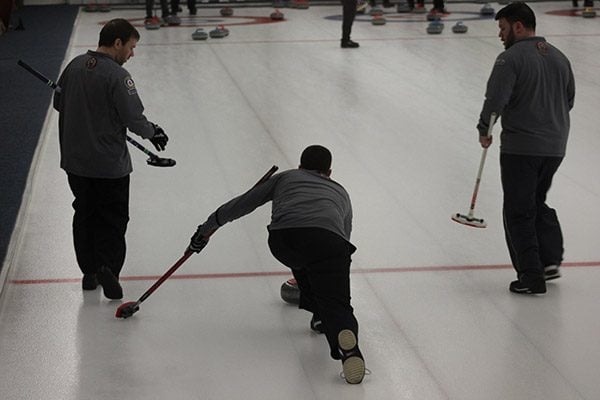 Curling is in incredibly fun sport and I could ramble on and on about it…but I’ll stop here.  Olympic years are huge for recruiting new members to the sport, and nearly every curling club hosts open houses to coincide with the Games.  So if you’re interested, go see if there is a curling club near you.  Then check their website and see if they have an open house coming up.  For the most part, curlers are very welcoming folks!  And curling clubs have been popping up all over the country (even in the deep South) lately.  So find a local club and stop in if you can!  You never know…you might just get addicted to curling!  (Oh, and curling is a sport you can play for your entire life.  We have several members in our club who are over 80.) 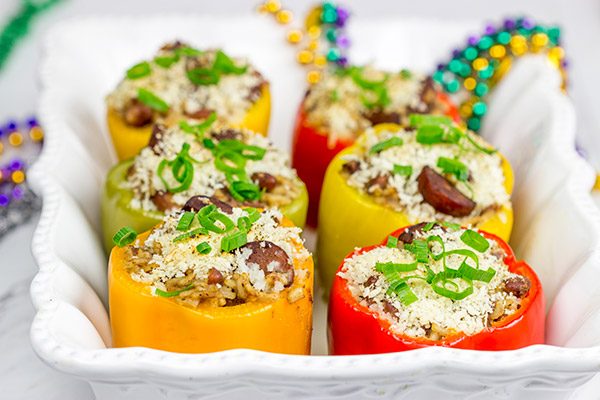 As this is a food blog, and I just spent the last several minutes rambling about something non-food related, I figured we should wrap up with a chat about these Red Beans and Rice Stuffed Peppers.  After all, Mardi Gras is sneaking up on us soon, and that means some good Cajun food is in order.  That means these Red Beans and Rice Stuffed Peppers are in order! 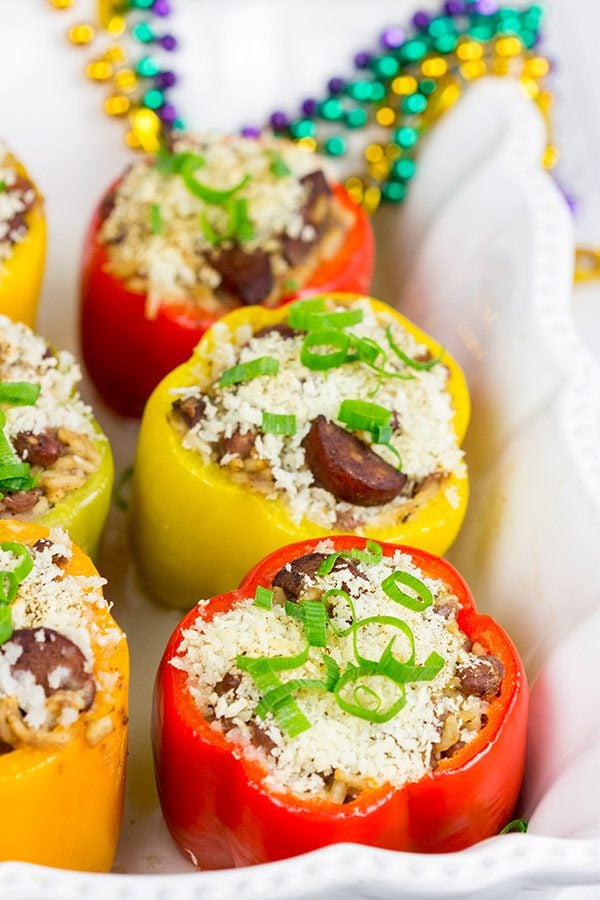 Nearly all Cajun recipes start with the “holy trinity of Cajun cooking,” or bell peppers, onions and celery.  I’ve been making Red Beans and Rice ever since I lived in Louisiana for several years after college, and red beans are one of my favorite Cajun meals.  There’s just so much flavor locked in there!  But the other day, I had a fun idea of combining my Red Beans and Rice recipe with my Italian Stuffed Peppers recipe.  Since the filling for these Red Beans and Rice Stuffed Peppers was going inside of a bell pepper, I decided to leave the peppers out of the holy trinity.  Other than that, it’s pretty much the same classic recipe.  Mix it all up, let it simmer away for several hours and then stuff those peppers! 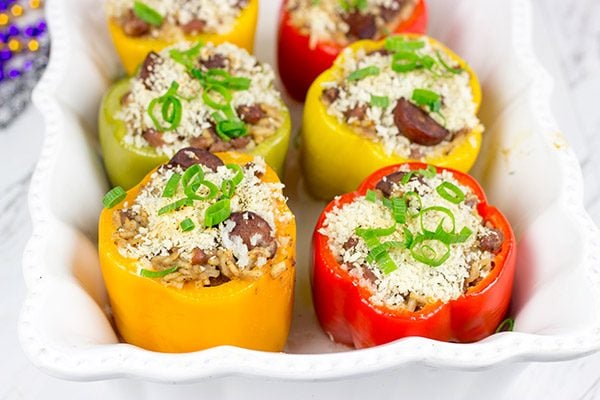 If you’re looking for delicious comfort food that’s perfect for the Mardi Gras season, then these Red Beans and Rice Stuffed Peppers are the answer!  It’s an inexpensive meal (especially if you use only green bell peppers) that feeds a crowd.  Enjoy, my friends! 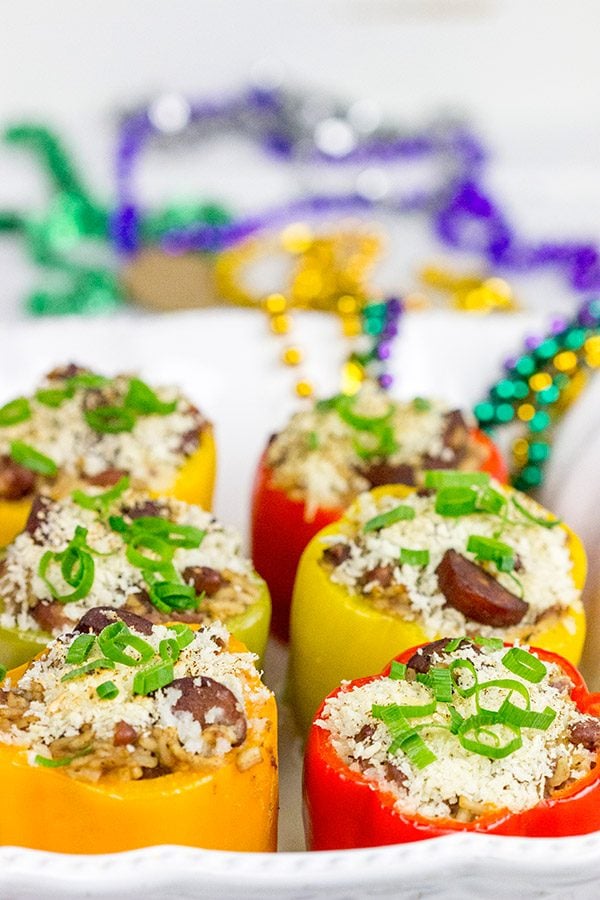 Also, I just had to add this video.  Cheetos came up with this “How to Curl” video featuring Vernon Davis and Ladainian Tomlinson.  It’s hilarious!  I also love that curling is getting a little bit of “mainstream” love, too!

For the Red Beans

For the Red Beans and Rice