This Mexican Creamed Corn is a fun and easy side dish…perfect for summer evenings on the back porch! 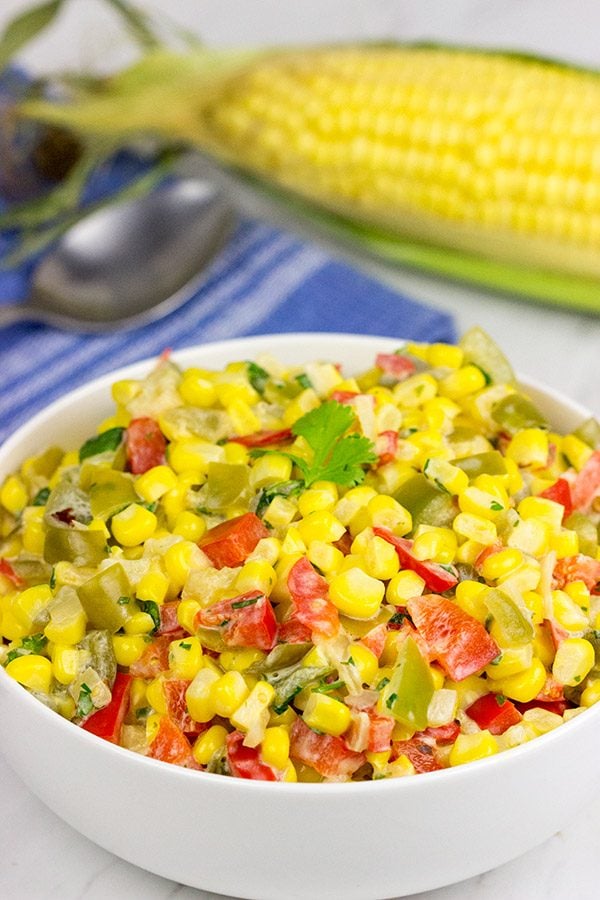 I’m fond of saying that anything can be turned into a taco.  Whenever we have leftovers, Laura is quite adept at taking said leftovers and recreating them in taco form for dinner.  Heck, I even followed her lead and made these ice cream cones last summer.  (Sure, they aren’t shaped like tacos, but they could be!)  Well, apparently repurposing foods runs in Laura’s family as her younger sister can turn anything into a dip.  Give her a bag of tortilla chips, and everything is a dip! 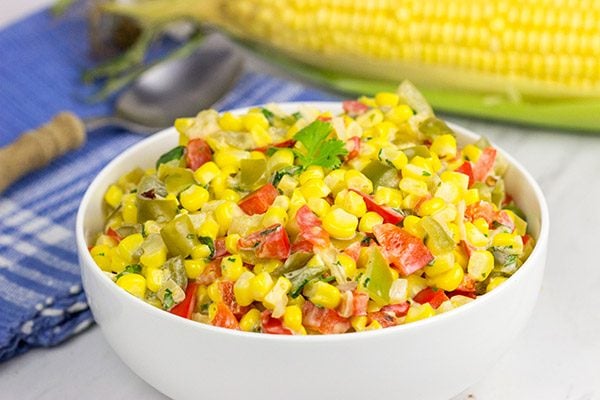 Back in Atlanta, Laura threw me one epic 30th birthday party.  (I won’t admit how long ago that was.)  But seriously, this party involved a 2-story inflatable water slide.  The top of the slide was level with the window in our 2nd-floor bedroom.  We went retro with the party theme.  I’m talking old-school candy like Big League Chew and Pop Rocks.  I’m talking a massive birthday cake shaped like a dinosaur.  I basically refused to admit that I was entering my 30s, so I partied like a kid!  Take that water slide and add a couple dozen friends and some beer, and that’s how we rolled that afternoon.  Right in the middle of our driveway in suburban Atlanta! 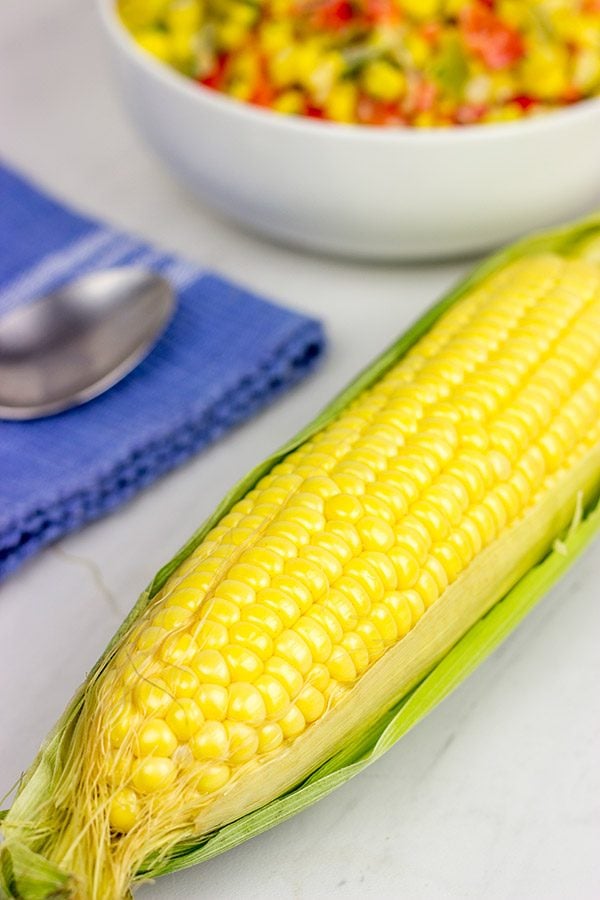 But to bring this story back, we’d made a huge batch of my mother’s Black Bean Salad.  This is one of our favorite side dishes for hot summer days, and I’m actually surprised that I’ve never posted it here.  I’ll have to get on that sometime soon!  But we had a massive bowl of this bean salad for the party.  In walks Laura’s younger sister with a bag of tortilla chips, and she digs right into the bean salad.  Wait.  That’s a side dish, I told her.  She responded by dipping another chip into the bowl.  But I had to admit that she was onto something there…that bean salad was pretty darn good as a dip! 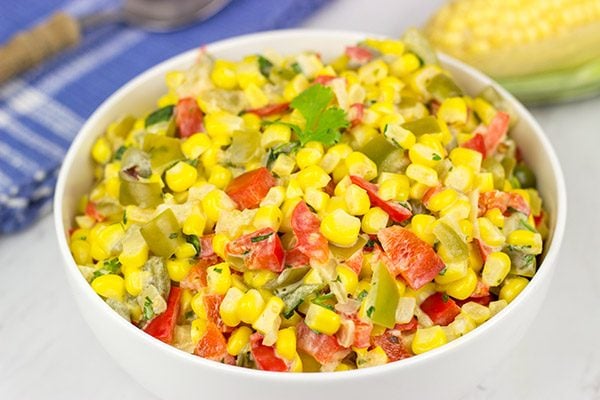 As I was making this Mexican Creamed Corn the other day, it totally reminded me of that bean salad/dip and Laura’s younger sister.  As I stood in the kitchen looking at this bowl of Mexican Creamed Corn, I thought it might be good as a dip.  So I opened up a bag of tortilla chips, and sure enough.  Tasty!  (I think the extra salt from the chips really seals the deal for me.)  It’s kinda like a corn salsa, but with a notable tomatillo flavor going on. 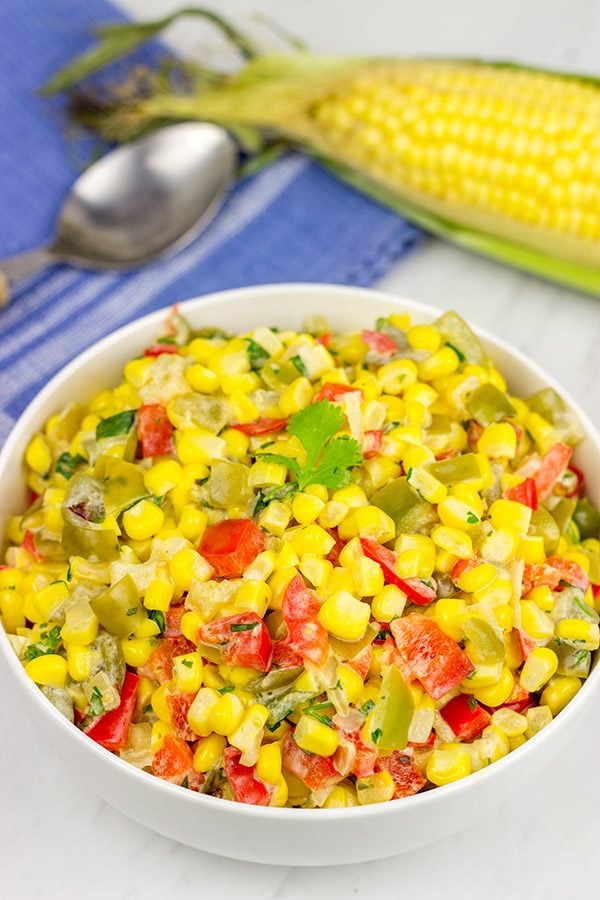 Speaking of tomatillos, have you guys ever cooked with these?  We can’t get many Mexican ingredients way up here in upstate New York, but we are lucky enough to always have tomatillos in the store.  Every time we pass them, Laura tells me we should make a batch of green salsa.  I’ll get around to that some day, but for now I’m sticking with this Mexican Creamed Corn.

The tomatillos give this dish a really fun twist, and the bit of crema (or sour cream) stirred in at the end adds a delicious tang, too.  On a side note, if you can’t get crema in your area, Alton Brown has a good recipe for it.  Sour cream is similar in a pinch, but do give the real deal a shot sometime.  (It’s a must when making this Grilled Mexican Street Corn…which is another favorite around here when fresh summer corn is plentiful in the grocery store.)

Serve up this Mexican Creamed Corn as a fun summer side dish…or grab some tortilla chips and dig right in! 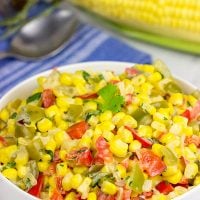