These Cheddar Cheese Puffs (also called Gougeres) are light and airy, and they melt in your mouth. They’re great as an appetizer or served next to a bowl of soup!

These Cheddar Cheese Puffs? Not biscuits. The ingredient list might look somewhat similar – at least until you get to the eggs. These puffs (also called Gougeres) are amazing. Seriously. They are cheesy little puffs that end up with a golden crisp outside. And the inside? Light and airy and melts in your mouth!

These cheese puffs start with choux dough – the same kind of dough that is used for sweet treats like cream puffs and eclairs. However, instead of going with a sweet filling, that dough gets mixed with shredded cheese. I tossed in a bit of fresh thyme for added flavor, too.

Unlike traditional Southern-style biscuits where the cold butter gets cut into flour, the method for Gougeres calls for melting the butter and making a dough in a saucepan – yup, a “cooked” dough. Once you get the hang of making this dough (it’s not hard – I promise!), you’ll find all sorts of occasions to make these Cheddar Cheese Puffs!

Speaking of occasions, we served these alongside a bowl of soup. Gougeres also make for great finger foods – maybe as an appetizer with a glass of wine or a beer? They are light as air…and the entire basket will disappear before you even realize it!

These Cheddar Cheese Puffs are best served warm right out of the oven. However, if you’re worried about timing, these do freeze well – just freeze the entire pan before you bake ’em. These puffs can be baked from frozen, although you might need to add a few more minutes in the oven. (Just watch for the tops to turn a nice golden brown.)

If you have leftovers, I recommend reheating them in the oven (or toaster oven) on low heat – say like 250°F – for a few minutes. These puffs will soften up when placed in a storage container, and reheating ’em brings back that warm melt-in-your-mouth texture with the crispy outer shell.

Gougeres originally hail from France, and many French grocery stores sell bags of frozen, unbaked Gougeres. You probably won’t find these hanging out in many grocery stores here in the States…so just make your own instead!

I personally enjoyed these with a sharp cheddar cheese (I used Cabot’s Seriously Sharp Cheddar Cheese), but Gruyere and/or Swiss cheeses are also good options. Hmmm – now I’m wondering what would happen if we used a combination of cheeses? I might have to try that next time we whip up a batch!

I hope you give this recipe a try – it’s definitely a new favorite in our house! Happy baking!

Did you bake a batch of these Cheddar Cheese Puffs (Gougeres) at home? Leave a comment, or snap a photo and tag me on Instagram (@Spicedblog) – I’d love to see your version! 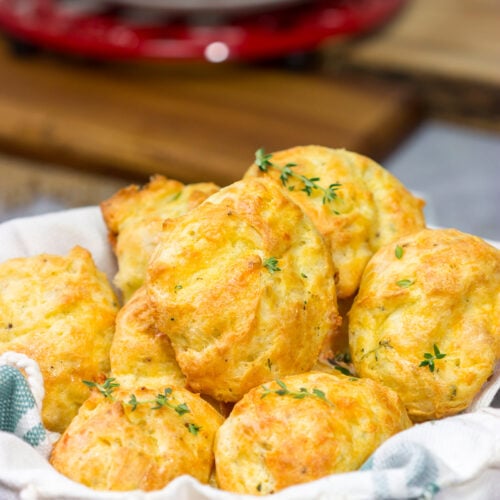 These Cheddar Cheese Puffs (also called Gougeres) are light and airy, and they melt in your mouth. They're great as an appetizer or served next to a bowl of soup!
5 from 7 votes
Print Pin Rate
Prep Time: 30 minutes
Cook Time: 30 minutes
Total Time: 1 hour
Servings: 24 pieces
Calories: 84kcal

I used Cabot’s Seriously Sharp Cheddar Cheese. I recommend shredding your own cheese for this recipe as pre-shredded cheese will not melt as well.

Looking for more cheesy bread recipes? Check out some of these other favorites, too: