Need a unique and tasty appetizer?
Give this Cheesy Spinach and Sundried Tomato Focaccia a try!
(Just don’t eat it all before the party…) 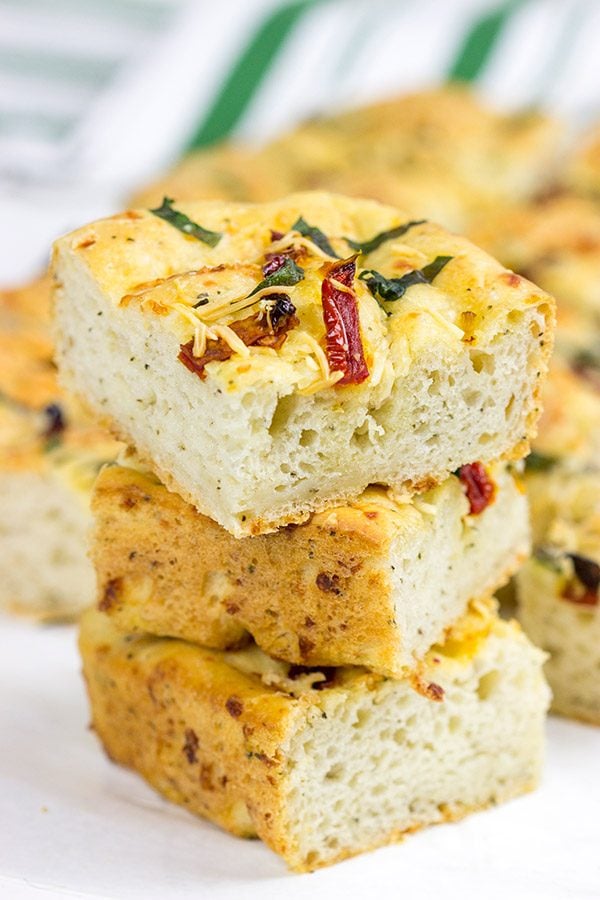 I stumbled across the most amazing stat the other day.  The world’s largest focaccia bread was baked in Taranto, Italy back in 2005…and it weighed 6,172 pounds (2,800 kg).  6,000 pounds.  I searched for photos as I imagine this focaccia must have taken up the entire piazza in Taranto.  No luck on the photos, but I’d venture to guess that they might still be eating that focaccia.  6,000 pounds!

Seeing this stat made me realize that it’s been a few months since I’ve baked focaccia, so I decided to hit the kitchen.  I saw a tip somewhere to include shredded mozzarella in focaccia dough, so I decided to give that a whirl.  And woah.  This focaccia turned out amazing!  Like seriously one of my favorite versions ever.  Rather than a cheese-stuffed focaccia (hmmm.  maybe I should try that next time.), the shredded cheese almost melts into the dough as it bakes.  The result is nothing short of delicious.  I wanted to eat the entire tray by myself.  (I didn’t…I took it into the curling club as a post-game snack after one of our last games of the season.) 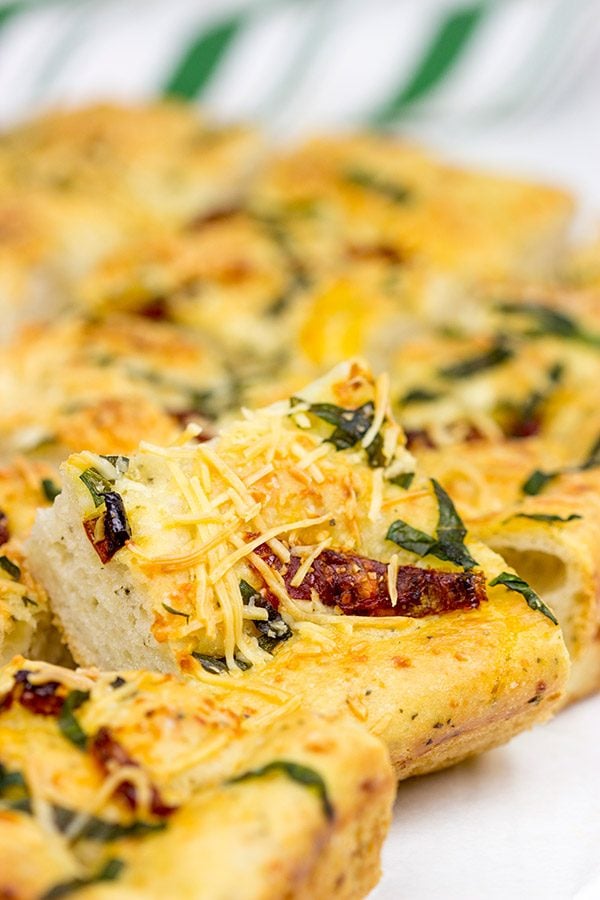 Have you ever baked focaccia at home?  I’ve baked it a number of times now, but the first few times were epic fails.  Like I’m kinda surprised I stuck with it after seeing how poorly the first few turned out.  The first time was probably 5 years ago, and I wanted to take a freshly baked focaccia as an appetizer to our neighborhood holiday party.  I must have misread the recipe because this focaccia was literally swimming in olive oil.  It absorbed as much as it possible while baking, and it still had a lot of olive oil left in the pan.  Oops.

Epic fail #2 happened a couple years back when I was visiting one of my buddies down in Philly.  He loves focaccia.  But he didn’t know much about baking.  I love baking bread, so I suggested we make a batch of focaccia one afternoon.  We were just sitting around watching football with our wives, so it was the perfect time to make a delicious snack.  Well, I’m thinking we misread the pan size because we ended up with something more like focaccia crackers.  Still tasty, but definitely not focaccia.  Oops. 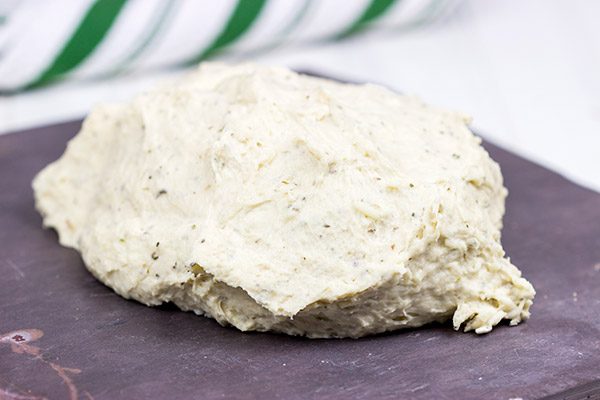 Not to be deterred, I stuck with the focaccia experiments, and I’ve finally got a couple good focaccia recipes.  There was this Goat Cheese and Tomato Focaccia a few months back, and now this Cheesy Spinach and Sundried Tomato Focaccia.  The shredded mozz in the dough trick is a good one, and this might become my go-to focaccia base now. 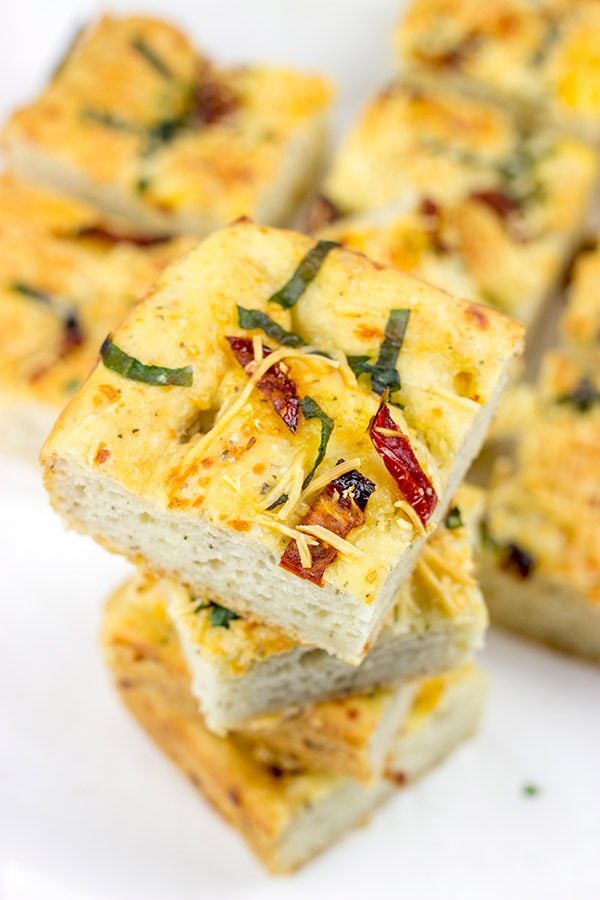 I know some folks out there have an aversion to yeast.  I get it.  Yeast is a different beast (no pun intended).  But if yeast is still scary to you, then this is about as safe of a yeasted recipe as you’ll find.  You mix up the dough, press it into a pan and let it rest for about 1 1/2 hours at room temperature.  It’s pretty hard to screw this one up!

Before baking, I tossed some fresh spinach and sundried tomatoes on top of the dough, and the result was magical.  Our house smelled incredible while this bread was baking!  This Cheesy Spinach and Sundried Tomato Focaccia was tasty enough to just gobble down by itself, but if there are leftovers (hah…leftovers), then they would make some pretty epic sandwich bread.  I might have to make another batch soon just to save for sandwich bread.  Enjoy! 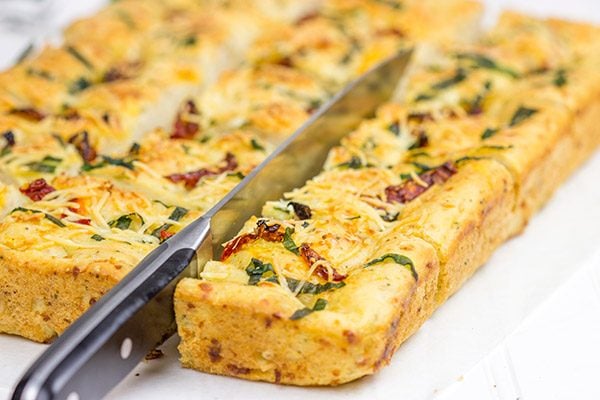 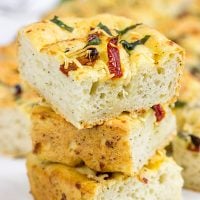