Packed with seasoned ground beef, bacon and two types of cheese, this Bacon Cheeseburger Monkey Bread makes for one heck of a delicious gameday appetizer!

This Bacon Cheeseburger Monkey Bread post is sponsored by Cabot Creamery, but the recipe and opinions are entirely my own. Thank you for supporting the brands that support Spiced! 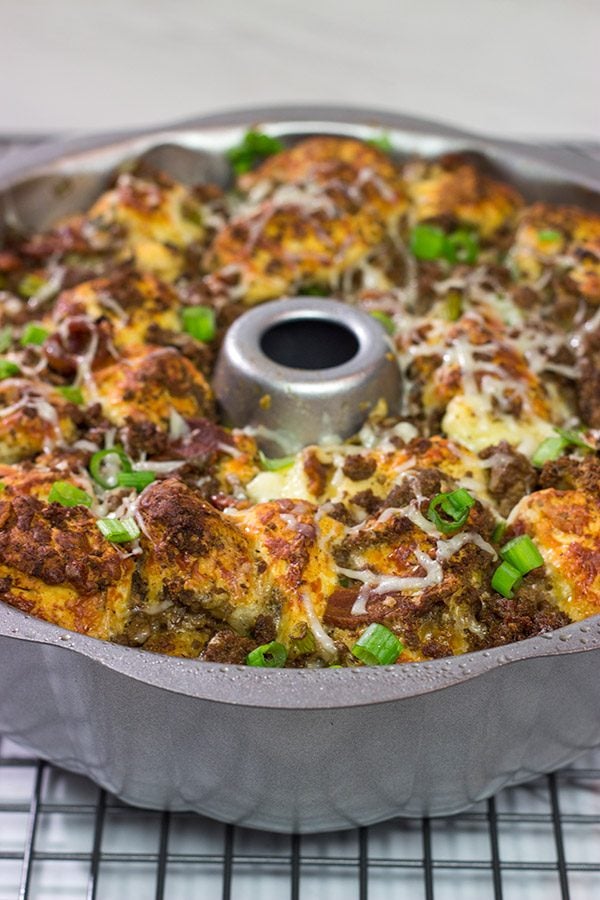 The Big Game is almost here.  Just another two weeks(ish) before football season officially wraps up for the year.  (That’s when I turn my attention 110% over to college basketball!)  I feel like football playoffs arrive at the perfect time each year.  Coming out of the holidays, we’ve all been (mostly) good.  We’ve put aside the desserts and turned towards soups and stews.  But after a couple weeks of that, we get to take a quick break for football food.  Yum!  Now I love a good football game, but half the fun of the big game is the appetizer table in the corner.

After sitting last year’s game out, I’m back in playoff football mode this year…and I’m bringing an excellent gameday snack your way with this Bacon Cheeseburger Monkey Bread!  Before we get to the recipe, though, I want to share some really fun factoids about the big game.  You’ll certainly impress your friends when you pull out these interesting tidbits at this year’s party! 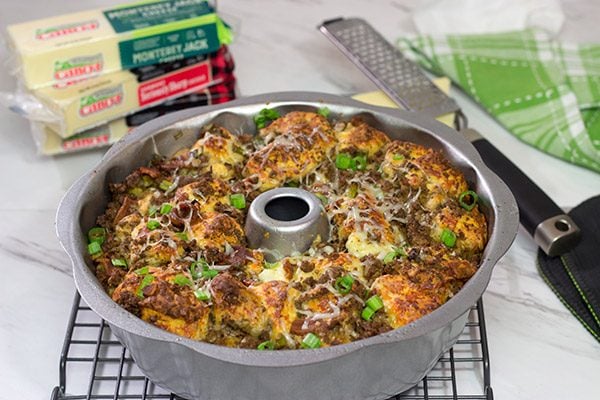 Have you ever wondered why they use Roman numerals instead of years for the big game?  It’s because the football season crosses two calendar years.  Should this year’s game be 2019 or 2020?  The problem is solved by using Roman numerals.

8 of the 10 most watched American televised programs of all time are NFL championship games.  (The other two events are the moon landing in 1969 and Richard Nixon’s resignation speech in 1974).  The most watched game was XLIX (2015) when New England defeated Seattle 28-24.

The Minnesota Vikings have played in 4 championship games…but they’ve never had the lead in any of the games.

In 1985, the Chicago Bears recorded a rap song called “The Super Bowl Shuffle.”  Not only was this song a hit, but it was nominated for a Grammy for Best Rhythm and Blues Performance by a Duo/Group. 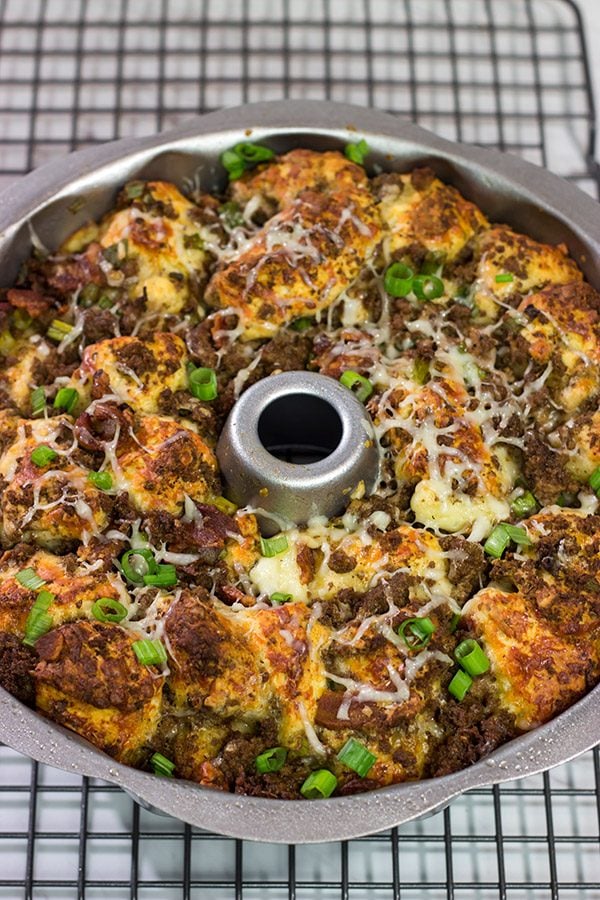 Now that you’re armed with some fun trivia for this year’s party, let’s turn our attention to the food.  This Bacon Cheeseburger Monkey Bread is the perfect gameday appetizer!  For starters, it’s eaten with your fingers.  Secondly, this monkey bread is packed with flavor.  I used two types of Cabot cheese (Seriously Sharp Cheddar and Monterey Jack) along with crumbled bacon and seasoned ground beef.  Yum!

Finally, this monkey bread is quite easy to make.  Just cook up the beef and bacon and then mix it all together with sliced up refrigerated biscuits.  It bakes in a tube pan or Bundt pan, so it’s ready to go to the appetizer table as soon as it comes out of the oven.  Easy delicious finger food.  That’s how we roll for the big game each year! 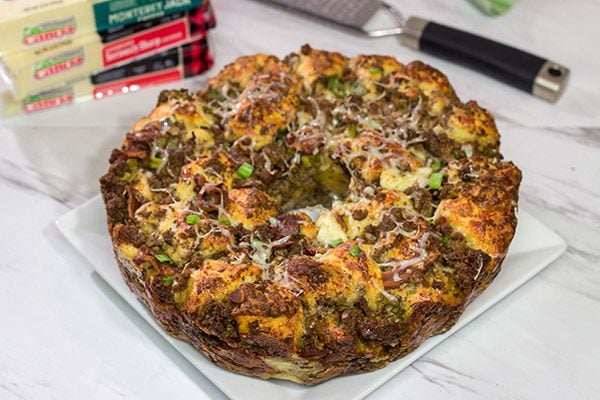 As I mentioned above, I used 2 types of Cabot cheese in this recipe.  Cabot Creamery is a co-op owned by farm families throughout New York, Vermont and New England.  Last summer, I had a chance to take my son to visit one of these farms that happens to be just 30 minutes away from my house.  (I love that Cabot farmers truly are neighbors in my local community!)

It’s amazing to see how hard dairy farmers work just so that we can purchase cheese, milk, yogurt and other products in the grocery store.  We always keep a variety of Cabot cheeses in the fridge, and I might’ve snacked on both the Seriously Sharp and Monterey Jack while I was making this Bacon Cheeseburger Monkey Bread.  (Click here to find which stores in your area carry Cabot products.) 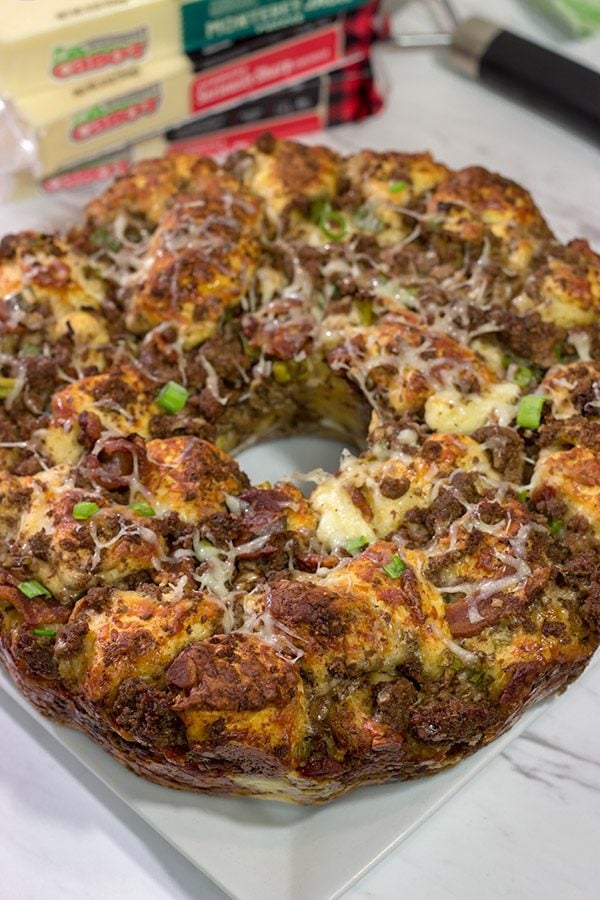 I hope you enjoy this Bacon Cheeseburger Monkey Bread as much as we did!  I know I’ll be making another batch of this one for game day.  Cheers!

Did you make this Bacon Cheeseburger Monkey Bread at home?  Leave a comment below, or snap a photo and tag me on Instagram (@Spicedblog).  I’d love to see your version! 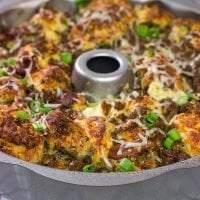 Looking for more tasty Super Bowl appetizer recipes?  Check out some of these other favorites, too: 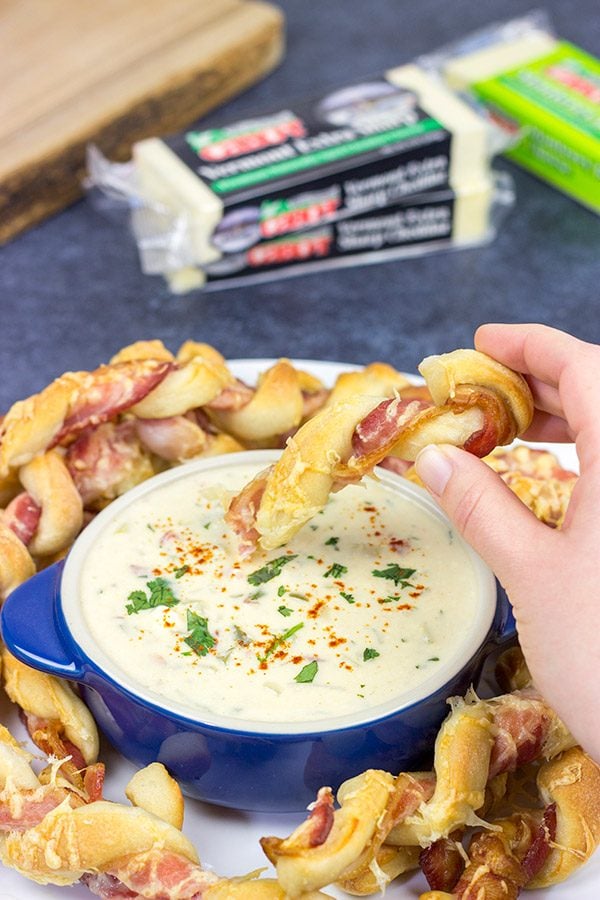 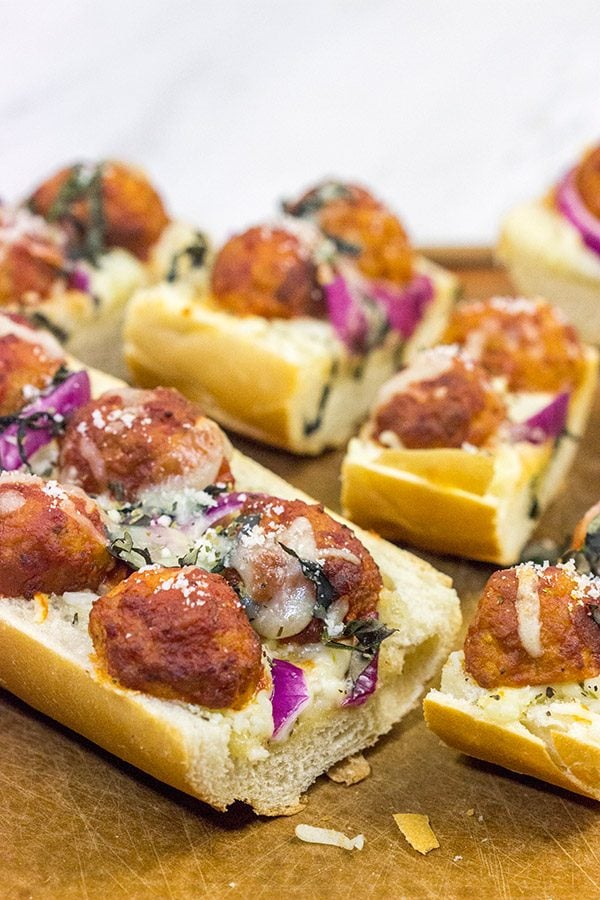 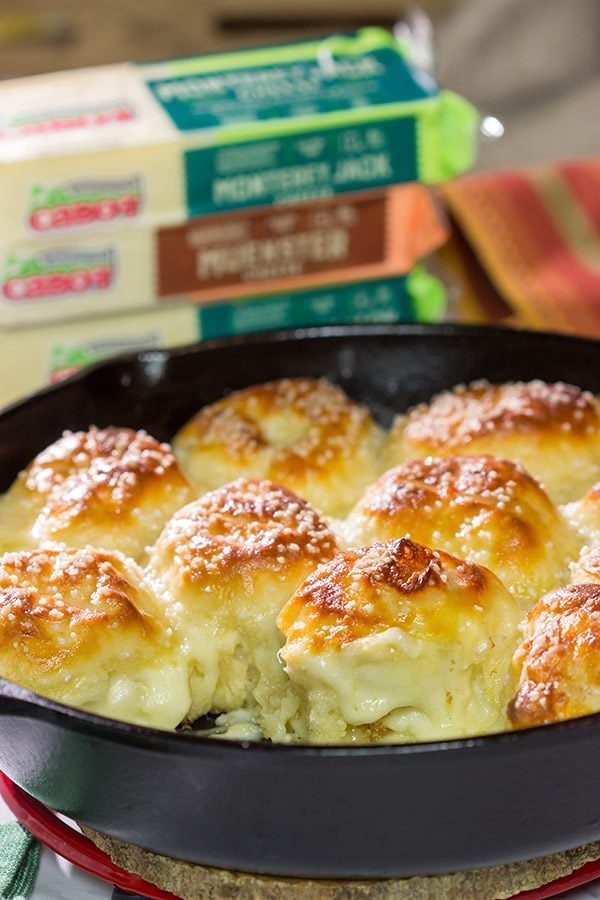