This Slow Cooker White Chicken Chili is perfect for cold winter days.  A good squeeze or two of fresh lime juice adds a delicious boost of flavor to this recipe! 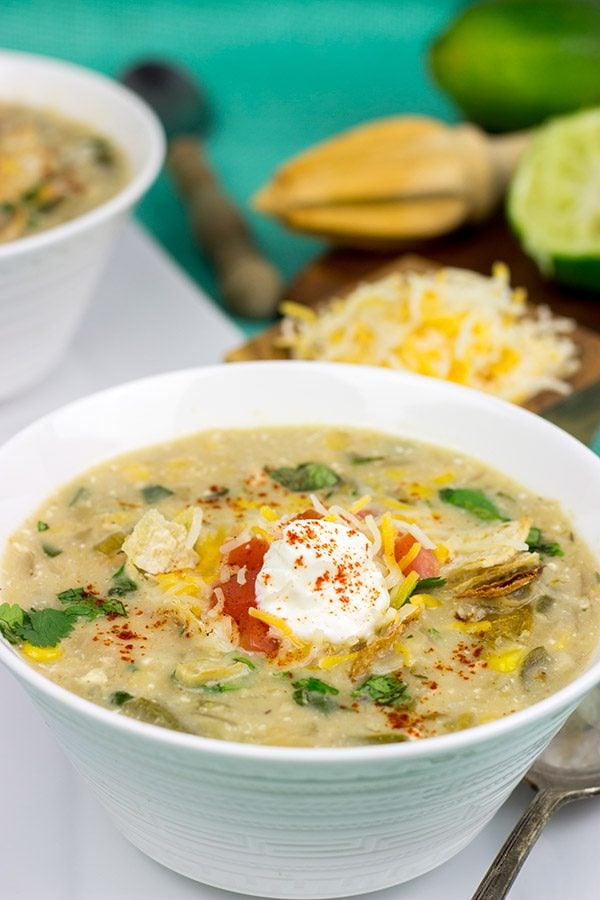 Is there anything more comforting that sitting by a roaring fire on a snowy winter day?  I’ve been doing that as much as possible this winter…often with a nice, warm bowl of chili in my lap.  (This Maple Bacon Chili is still a favorite around here!)  When not bundled up on the couch, I’ve been chasing a toddler around the house.  And when not chasing a toddler around the house, I’ve been snow-blowing and snow-shoveling our driveway.  I really do love the snow when it first falls.  It’s so quiet and peaceful outside.  In fact, the only sounds you hear are the snowplows going up and down the streets. 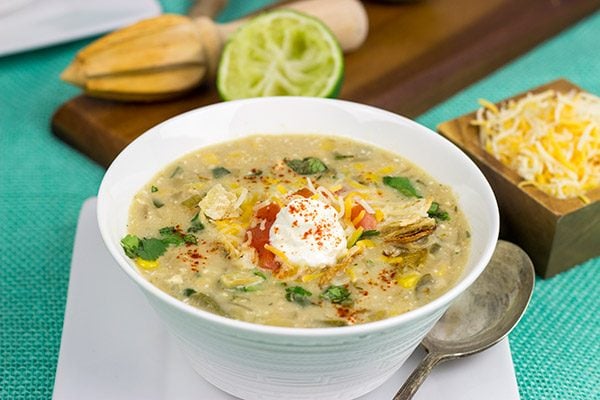 Speaking of snow plows, I recently saw that a number of cities are branching out from the traditional salt on the roads.  Typically, trucks packed with rock salt (the same salt as what you have on your dinner table) scatter the roads with large chunks of salt prior to a big snow storm.  Salt lowers the freezing point of water, thus helping to melt the snow that falls on roadways.  (Interestingly enough, the largest salt mining company in the US is actually located in western New York state.  Good place considering all of that lake effect snow that buries Buffalo ever year!) 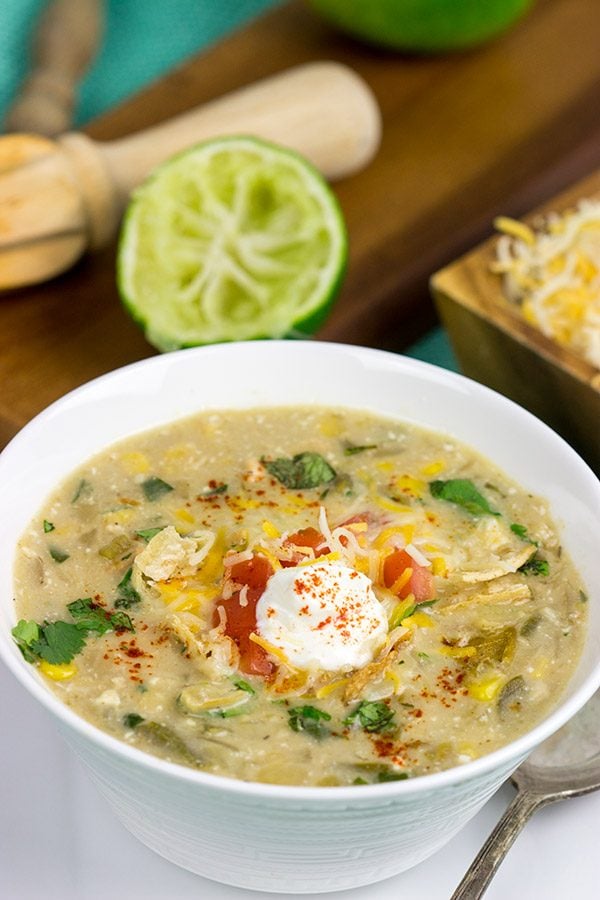 As helpful as it is, salt can actually damage nearby plant and animal life, and a number of cities have begun using other non-salt methods for prepping their roads.  Enter beet juice.  Yes, beet juice.  It turns out that beet juice combined with salt not only further lowers the freezing point for water, but the sticky solution actually stays on the roads rather than bouncing off like rock salt.

And beet juice isn’t the only food by-product being used in the winter.  Wisconsin has been experimenting with using cheese brine (normally a farm waste product) on their roads.  And New Jersey has tested out using pickle juice to treat their roads.  Last but not least, Tennessee has been toying with using potato juice brine…which is actually a byproduct of the vodka-making process.  Interesting.  I would’ve thought Tennessee would be using a byproduct of the whiskey-making process.  Either way, kinda cool, huh? 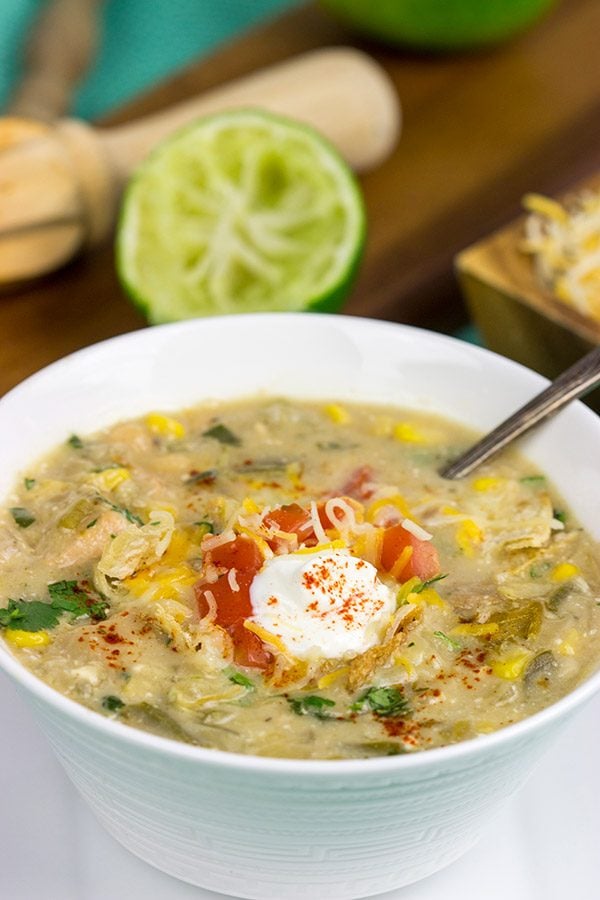 But let’s circle back to the food.  And not the beet or pickle brine kinda food.  I’m talking the Slow Cooker White Chicken Chili kinda food.  This chili is seriously the stuff to cure cold winter days!  I did opt to brown the chicken in a skillet first, so that added about 10 minutes to the cooking process.  Other than that, this Slow Cooker White Chicken Chili is embarrassingly easy to make!  (And honestly, the browning is an optional step.  You could just let the chicken cook in the slow cooker along with all of the other flavors.) 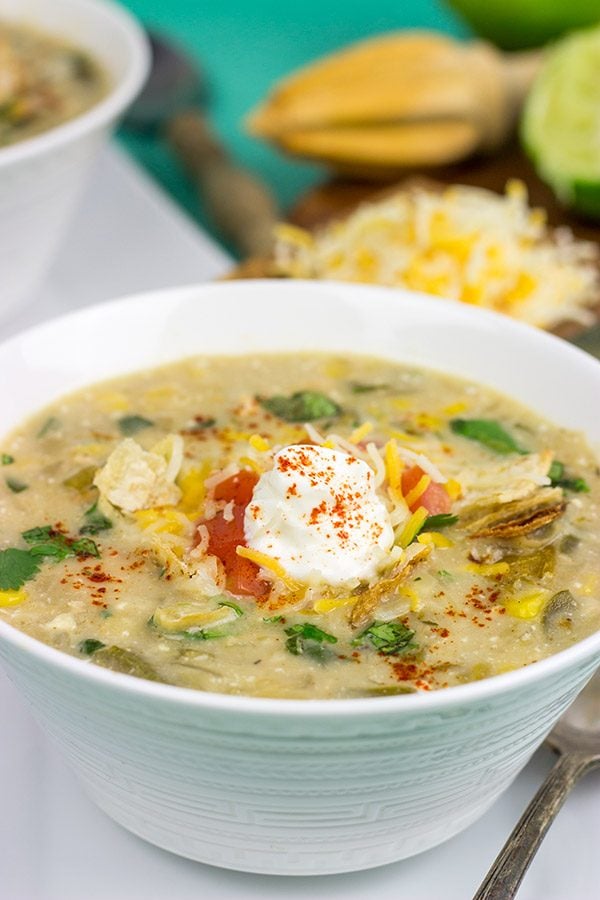 I like to add a good bit of lime juice to this chili as it helps brighten the final dish.  For some reason, I always crave citrus flavors once we hit the coldest part of the winter.  (It’s probably why I always crave lemon desserts during this time of the year, too.)  But the lime juice coupled with the fresh cilantro bring a nice, fresh flavor to this Slow Cooker White Chicken Chili.  This one is perfect for bundling up on the couch…trust me!  In fact, my plans for tonight?  Curling.  My plans for tomorrow?  A bowl of Slow Cooker White Chicken Chili and the couch.  And a couple of blankets.

Stay warm and enjoy this delicious chili, my friends! 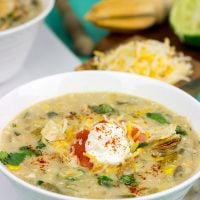 For the White Chili

For the White Chili