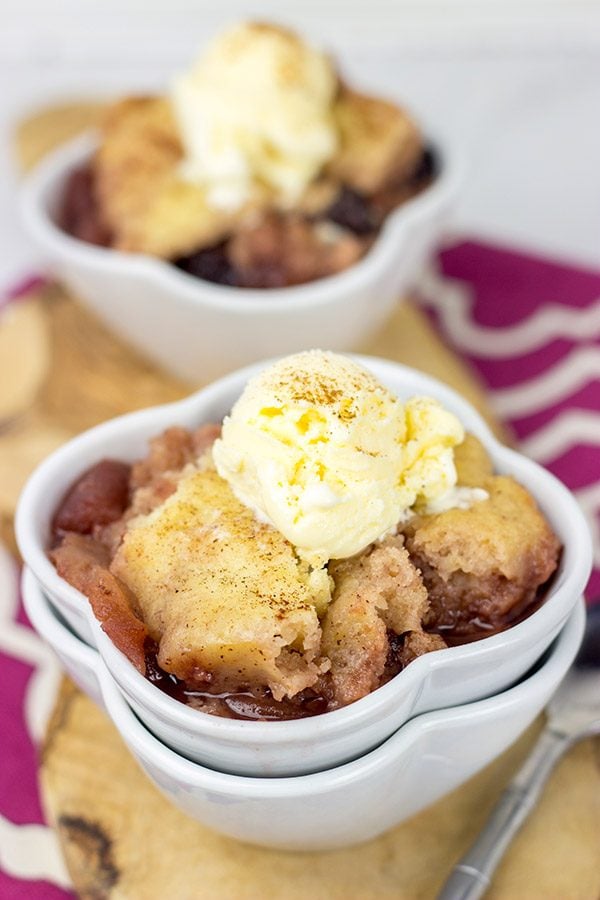 Oh, the Wolf.  The Wolf occupies a special place in our family…and we’re always trying to get rid of it.  I’m not talking about the wolf in the Little Red Riding Hood book that I had as a kid.  (Yes, I’d actually run into my sister’s room and hide that book in her closet.  The wolf was scary.  He had a big long red tongue and sharp teeth.  I figured if he’s gonna come out at night and get someone, it might as well be my sister!)  Nope, in this case, I’m talking about the Wolf.

A number of years back, when I was still in high school, my Dad and uncle went down to help clean out and sell my great aunt and uncle’s house in San Antonio.  My great aunt and uncle were wonderful, caring people, and they lived a long, happy life.  When they passed away, it fell to my Dad and uncle to help clean up their house and put it on the market.  That’s never a fun job, but they got in there and did what needed to be done.  But somewhere along the way, they found the Wolf. 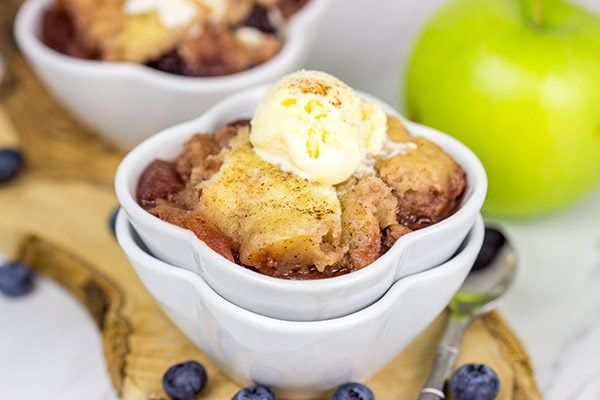 You see, the Wolf is a small rug made out of yarn.  I’m not a crafter, but I believe the term is ‘rug-hooking.’  The Wolf was hanging in the hallway of my great aunt and uncle’s house.  We don’t know if my great aunt made it, or if someone gave it to her.  Either way, the Wolf somehow became a source of comic relief during what was a rather difficult weekend for my Dad and uncle.  My uncle slipped the Wolf into my Dad’s rental car.  Then my Dad slipped the Wolf back into my uncle’s suitcase.  Well, the joke continued…and over time, it has expanded to include other members of the family. 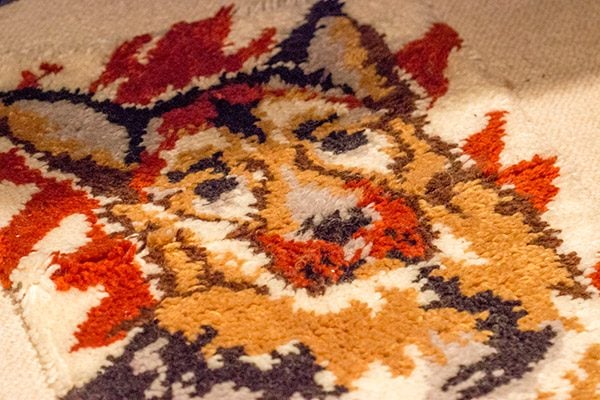 In fact, there was an epic moment back when I lived in Atlanta.  My sister had come to visit, and she left the Wolf in the guest bedroom as she was packing up her car.  But I found it before she left.  And I quietly slipped the Wolf right on top of her suitcase in her trunk.  (I volunteered to carry her suitcase out to the car…little did she know that I had the Wolf in my other hand.)  If only that Wolf could tell stories about where it’s been.  Heck, if only that Wolf earned frequent flyer miles for all of its travels from the Carolinas to Tennessee to New York and Texas.

Remember when my sister came up to visit a couple of months ago?  It was a pretty wild weekend thanks to her 2-year-old daughter.  When I finally dropped them off at the airport, I returned home to clean up a bit and get back into the swing of work.  That’s when I saw the Wolf.  I literally said “Son of a ***” when I saw it lying under my desk.  She got me.  Fair and square.  I had forgotten about the Wolf…but now I have it again. 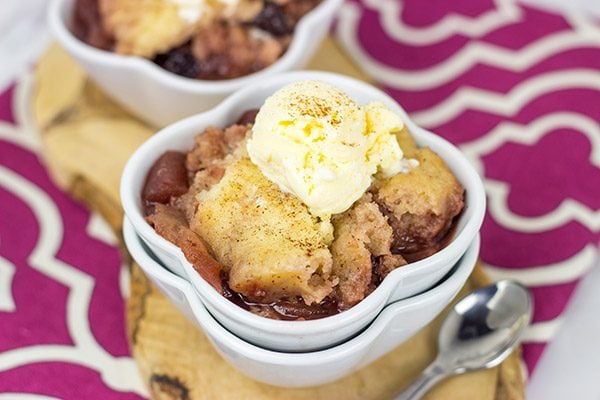 Ah, enough talk about the Wolf.  I should probably at least mention the recipe in today’s post, huh?  I made this Slow Cooker Blueberry Apple Cobbler last week, and it turned out quite well!  Cobblers aren’t all that difficult to make, but it’s nice to be able to start this one earlier in the afternoon and then not worry about it again until dessert.  The topping is not as sweet as a lot of cobblers, but I feel like this let’s the taste of the apples and blueberries take center stage.  (The topping does help absorb some of the liquid once you scoop out spoonfuls of this tasty Slow Cooker Blueberry Apple Cobbler, though.) 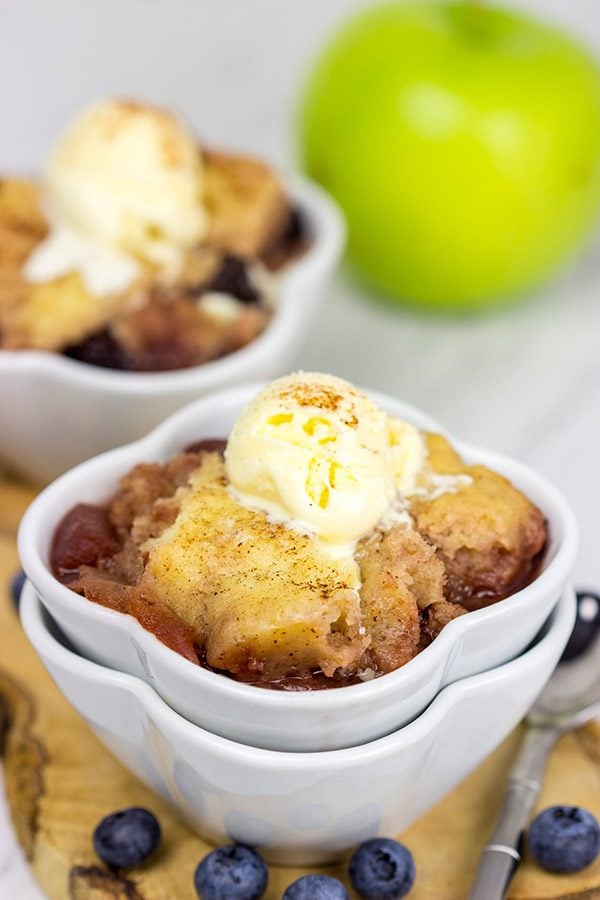 Slow cooker season is here!  So why not use that bad boy to cook up a tasty sweet treat for dessert tonight?  Enjoy!

Also, does anyone have any fun ideas about how to hand off the Wolf?  It probably won’t go back to my sister as it just came from her.  I feel like everyone is expecting it to arrive at Christmas…and I need some new creative way to sneak the Wolf off to the next unsuspecting family member! 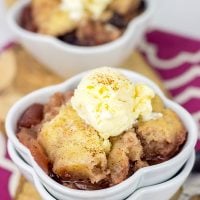 Looking for more slow cooker dessert recipes?  Check out these other favorites, too: 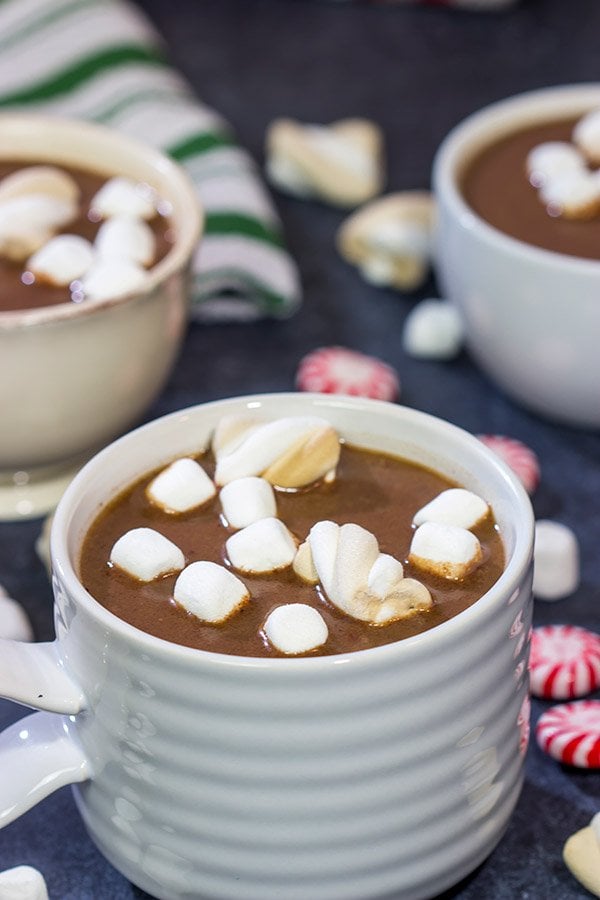