This Pork Chile Verde is loaded with flavor, and it’s a great way to warm up on a cold evening! 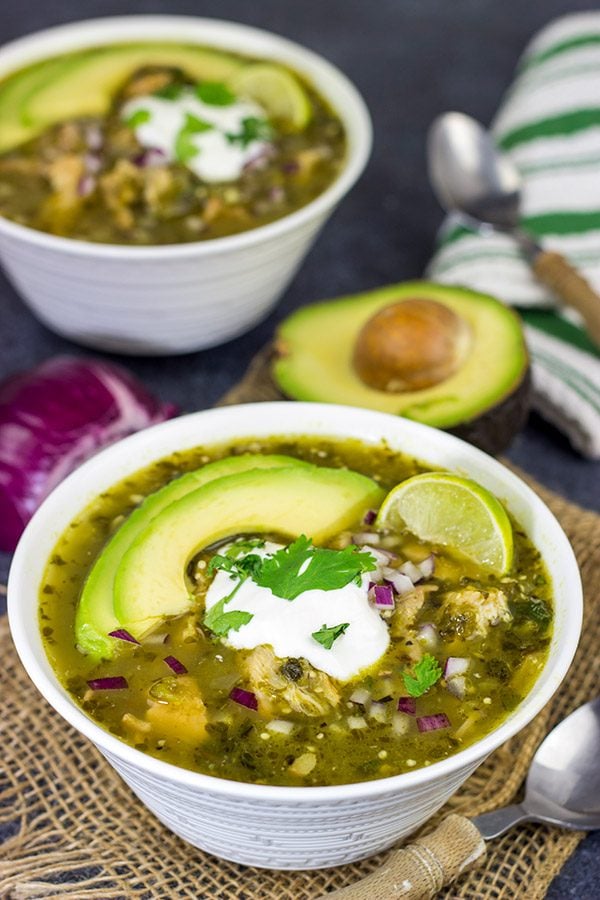 Back last winter, Laura emailed me from work with a recipe to try.  Turns out she had told one of her coworkers that I write a food blog, and he in turn shared his award-winning Pork Chile Verde recipe with us.  I’ll admit that I was a bit skeptical at first.  No offense intended to Laura’s coworker, but my experience with chili recipes from her work is rather skewed.

For years, her lab hosted a chili cookoff every Fall.  Folks brought in batches of their favorite chili, and everyone went around sampling chili.  Sounds awesome, right?  It is!  Until you get to the voting.  Somehow the winner was always the hottest chili…even if that just meant you added a jar or six of hot sauce.  Wowzers.  So with that as a backdrop, you can see why I might have been a bit skeptical of a chili recipe coming from one of Laura’s coworkers! 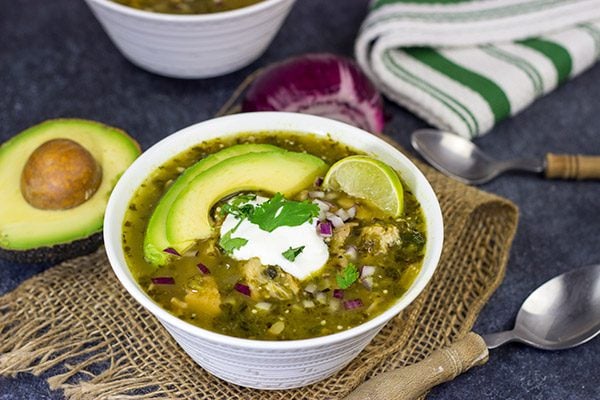 It turns out that the chili cookoff rules in his lab were a bit different, and the title could be earned without the addition of copious amounts of hot sauce.  Plus, Laura pointed out that “he used to manage a Mexican restaurant and his wife is Hispanic — that might add some credibility to the recipe.”  I agreed.  That definitely earned some street cred with me!  So I added that Pork Chile Verde to our list of recipes to make.  But then it somehow slipped from last winter to this Fall…oops.

What is the difference between chili and chile?

Technically, chile refers to the plant (i.e. a chile pepper) while chili refers to the recipe (i.e. Maple Bacon Chili).  However, the two words are still used interchangeably.  For instance, Pork Chile Verde is typically spelled with ‘chile’ instead of ‘chili’ even though this recipe is served in a bowl like chili.  Whew.  Have I confused you yet?  In short, call it what you want!  It’s delicious either way. 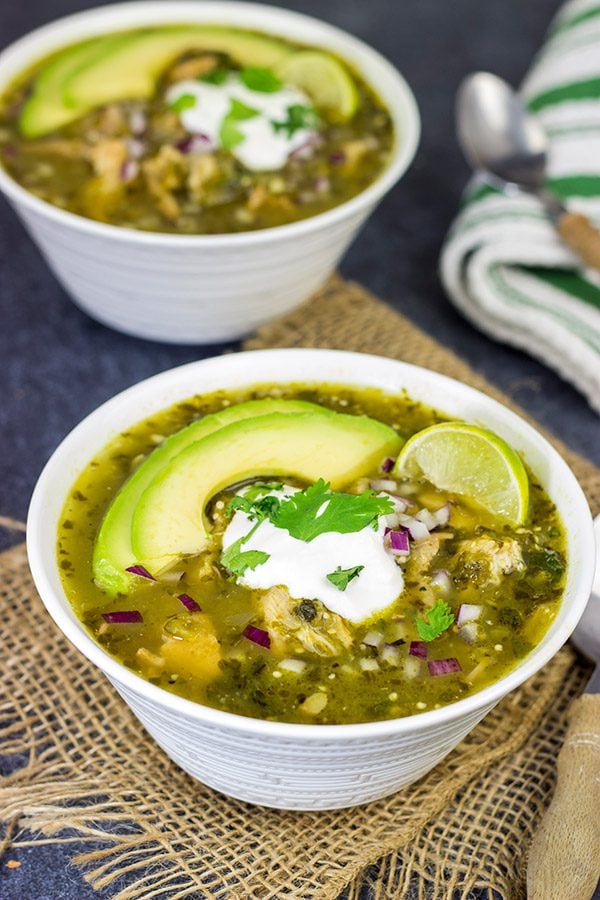 What are the main ingredients in Pork Chile Verde?

Pork Chile Verde is a staple in nearly every taco and burrito restaurant in the U.S.  And there’s a reason why!  Pork Chile Verde is typically made with pork loin or pork shoulder that is slow-cooked with tomatillos, peppers and garlic.  The peppers are often roasted first which adds another layer of flavor to the final dish.  My advice: don’t skip the roasting of the peppers.  There is so much flavor in this Pork Chile Verde!

Well, yes and no.  This depends entirely on how you make it.  For instance, this recipe for Pork Chile Verde calls for 2 serrano peppers.  (Serrano peppers are roughly 3 times spicier than jalapenos.)  For a less spicy version, you could use one jalapeno instead of the serranos.  Or you could omit the serranos and jalapenos entirely.  Alternatively, you could go the other direction and use more serranos.  Or if you’re a real glutton for punishment, use Thai Chili Peppers or Habanero Peppers.  In short, it depends on which peppers you use! 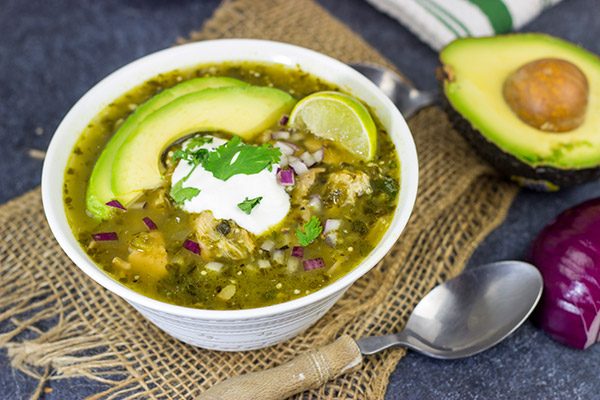 How many tomatillos are in a pound?

Finally, I had to include this question as I literally walked back and forth between the tomatillos and the scale in the produce section about 4 times.  There are roughly 15 medium-sized tomatillos in a pound.  So this recipe calls for ~30 tomatillos.  That’s a fairly big bag, but those tomatillos provide the backbone of flavor for this Pork Chile Verde!

This Pork Chile Verde recipe involves several steps, so it’s not going to be a meal that you just whip together on a busy weeknight.  Nope, save this one for the weekend.  And then just reheat it on busy weeknights!  I will say that it’s not a particularly difficult recipe, but it does involve roasting poblano peppers as well as broiling the tomatillos and garlic.  But these steps add a ton of flavor, so don’t skip ’em! 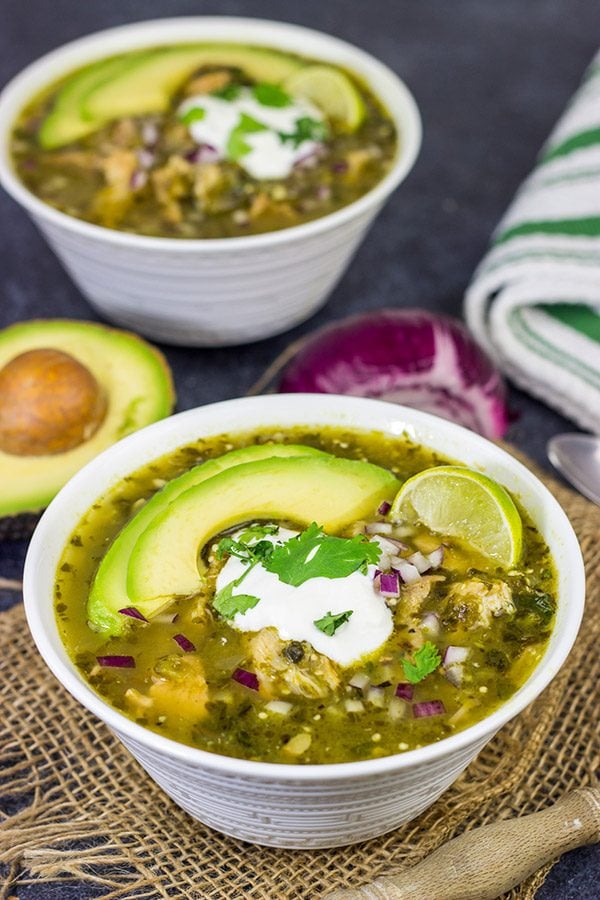 All in all, this Pork Chile Verde is a new favorite in our house.  Our thanks go out to Andrew from Cincinnati for sharing his award-winning recipe.  I can definitely understand why it took top honors!  Andrew, if you decide to go back to managing a Mexican restaurant, then we’ll be among your first customers…even if means we have to drive 11 hours to get there.

Love chili (or chile) recipes?  Then check out some of our other favorites! 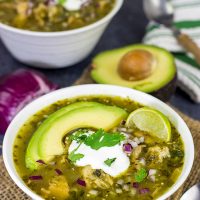 Hatch green chile sauce can be ordered online if it isn’t readily available in your area. Another option would be to substitute 5 chopped Hungarian wax peppers or cubanelle peppers. Adapted from Serious Eats with further adaptations by Andrew W.