Slow Cooker Pork Posole is an easy dish to make on chilly Fall and Winter days.  It’s packed with shredded pork and traditional Mexican flavors for a hearty and delicious meal! 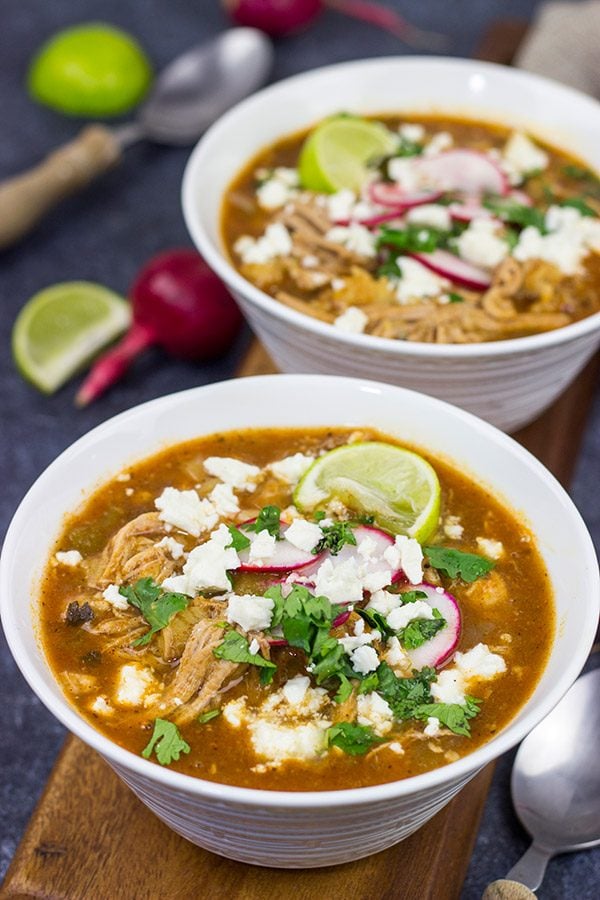 Growing up, trips to my grandparents’ house in upstate South Carolina were a time for celebration.  My mother has 3 brothers, so that meant 3 crazy uncles to play with whenever we’d make the trip up from Charleston.  Take our family and add in grandparents, cousins, uncles, aunts, a couple cats and two dogs, and you’ve got yourself a party!  Family meals were pretty much what you might imagine, too.  All of the adults sat at the main table while us kids sat at smaller card tables set up in a side room.  I got to be at the “big kids” table, though, so that was always exciting! 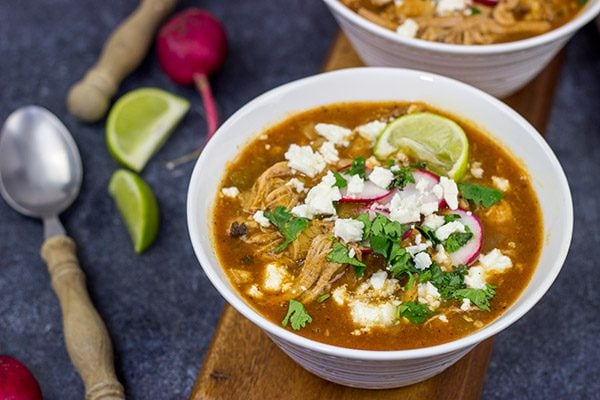 In the summer, these family gatherings always involved a huge plate of fried crappie that I had likely caught with my grandpa the day before.  He loved to fish, and I loved to go with him.  (But I did make him take the fish off the pole once I caught ’em.  Hah!)  And in addition to the fried fish, my grandpa always had a bowl of white hominy.  I had no idea what hominy was back then, and in true little kid fashion, I didn’t want to try it.  It looked like a bowl of kinda mushy stuff, and therefore I had no interest in it.  If only someone had told me that hominy is related to corn, then I probably would’ve dug in!

Hominy is made from dried corn that has been soaked in an alkaline solution that loosens the hulls from the kernels and softens the corn.  As a result, cooked hominy is much larger than just kernels of corn.  Dried hominy is often ground up to make hominy grits.  My love for grits is well-established, so I should’ve realized that hominy is related to grits.  In Mexico, dried hominy is also ground up to make masa.  Masa is similar to cornmeal, except masa will actually form a dough when water is added.  (This is thanks to the chemical process that takes place when corn is transformed into hominy.)  Masa is a key ingredient for corn tortillas, tamales and other classic Mexican dishes.  And we owe these tasty ingredients to hominy…at least in its dried form. 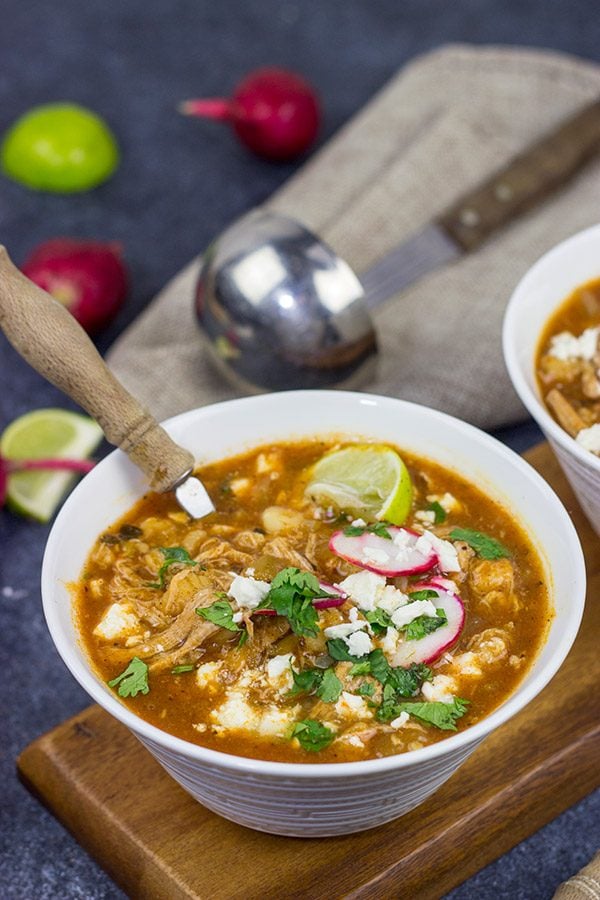 But back to hominy before it gets dried.  Hominy in this form is larger than corn kernels, and it’s a bit chewy.  Chances are you’ve walked by cans of hominy in the vegetable aisle in the store.  You might have even picked up a can at some point.  And that can might have slowly migrated to the back of your pantry where it’s hanging out with some soup and peas.  Pull that hominy out because it’s a key ingredient in making this Slow Cooker Pork Posole! 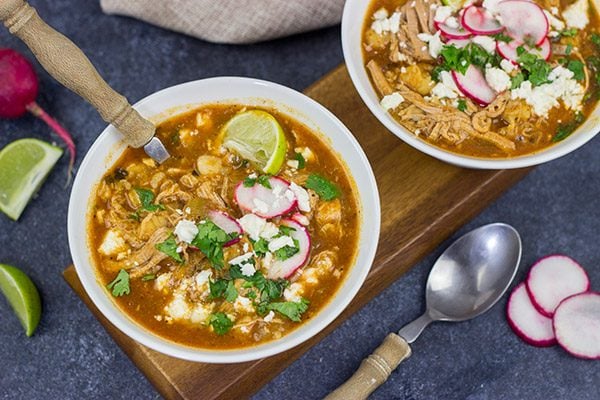 I’ve heard posole described as Mexican chili.  Not only is posole a thick soup or stew, but there are thousands of variations out there.  In a way, posole is the soup version of that family recipe for chocolate chip cookies.  Everyone has their own version, and all start with hominy (or at least they should!).  After all, the translation of posole (sometimes spelled pozole) is literally ‘hominy.’  This Slow Cooker Pork Posole is perfect for chilly Fall days.  It’s packed with flavor.  It’s got a little bit of heat.  And it’s chock-full of hominy and shredded pork.  Seriously, if a bowl of this Slow Cooker Pork Posole doesn’t warm you up, I don’t know what will! 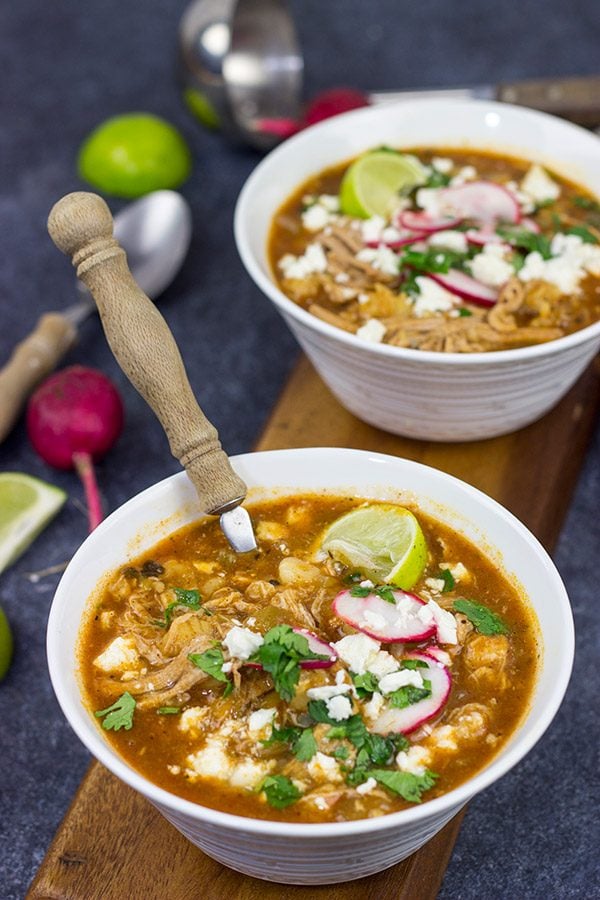 One of the things I love about this Slow Cooker Pork Posole (and most slow cooker meals in general) is that it’s literally a ‘open cans and dump’ type of recipe.  Sure, you could start with dried hominy or make your own enchilada sauce, but I don’t have time for that!  Instead, I just grabbed a couple cans of hominy, enchilada sauce, green chilies and chicken stock.  Add in some spices and herbs, and then let that slow cooker do the rest of the work.  But be warned: when you walk in the door later, your stomach will likely start to growl!

I hope you enjoy this Slow Cooker Pork Posole as much as we do.  And if you make a batch of it, stop back by and let me know what you think!  Cheers, friends!

Looking for other tasty slow cooker meals?  Check out these recipes, too! 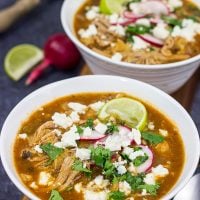