This Overnight Blueberry French Toast Bake is a fun (and easy) breakfast to serve on a lazy weekend morning! 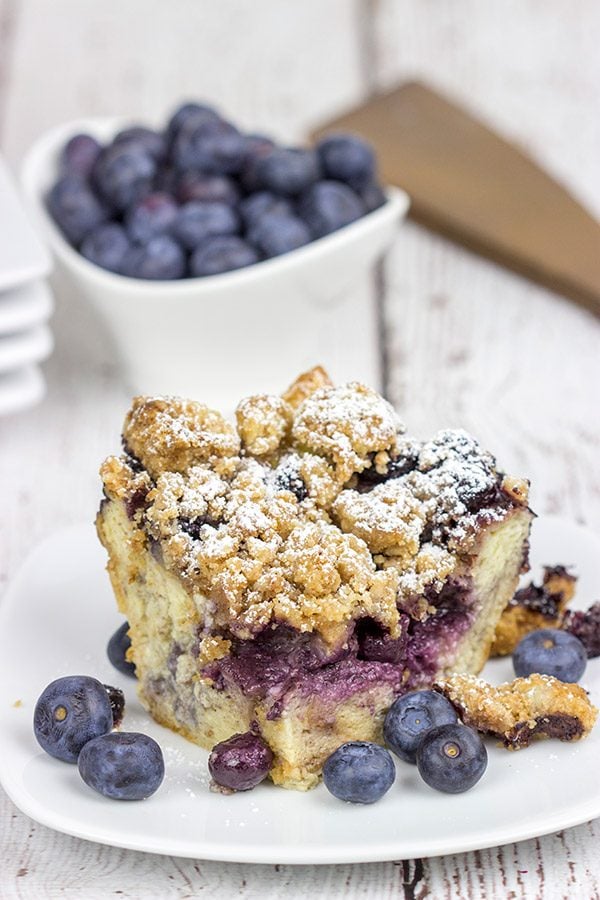 I’ve always been pretty thrifty.  (Some might call this “cheap,” but I prefer thrifty.)  To be fair, I have no problem spending money on big ticket items like presents for Laura and Robbie and the like.  But on a day-to-day basis, I clip coupons and compare sales at local grocery stores.  I also keep track of our monthly budget down to the penny.  Crazy?  Perhaps!  But it keeps us on track. 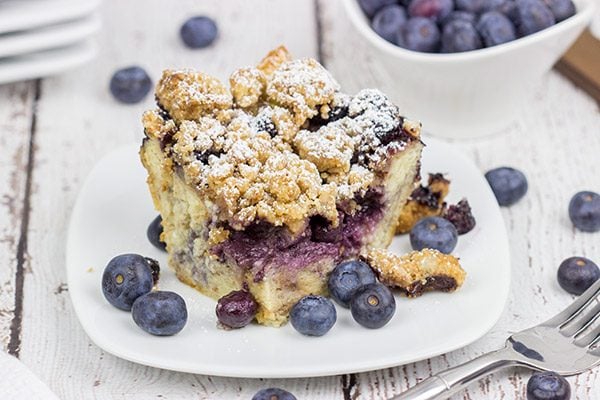 I credit my father with teaching me this detailed approach to budgeting.  Growing up, my sister and I got a small allowance each week.  I always stashed my allowance away so that I could buy more baseball cards or comic books.  My sister on the other hand used her allowance for Troll dolls.  You know, those creepy little dolls with spiky hair that every girl in the early 90’s just had to have.  Yeah, my sister has a whole box of Trolls in her storage room now.  (Granted, I can’t make fun of her as the entire space under our bed is filled with baseball cards.)  And I totally remember my sister trying to charge me 25¢ to look at her Troll collection.  She’s quite the entrepreneur, that one!

I got to thinking about allowances when I stumbled across this survey of average weekly allowances recently.  In 2017, the average US kid took him just under $9 a week in allowance money.  (Granted this ranges from $4 for 4-year-olds up to $12 for 14-year-olds.)  Aside from thinking back to my Dad handing us our allowances on Friday afternoon, I also got to thinking about allowances for Robbie.  Now Robbie is only 2.5 years old, so he’s got a ways to go before allowances kick in, but that article quoted a recent study from Cambridge University that found most people form their financial habits by 7 years old.  That seems young to me! 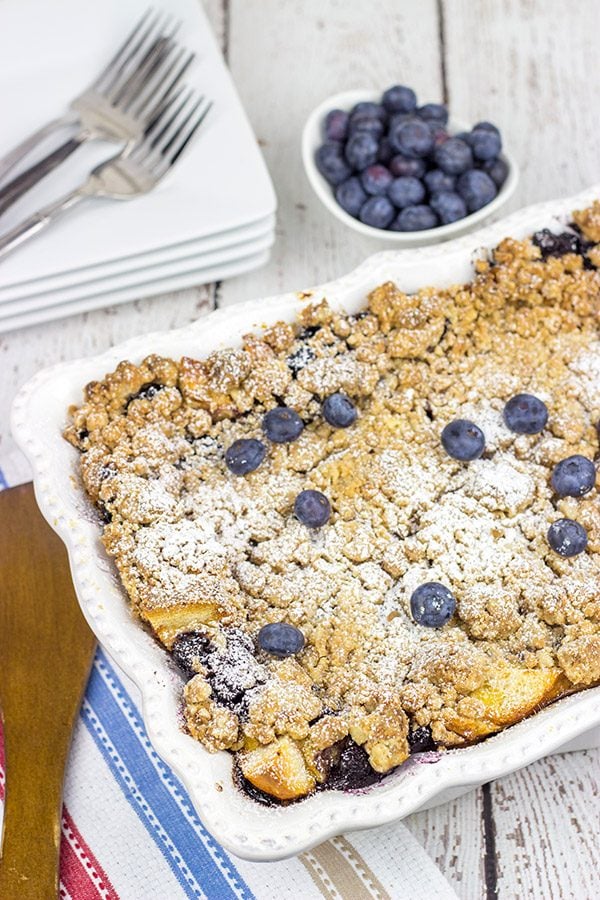 Thanks to technology, there are apps out there now where kids can keep a virtual ‘piggy bank.’  (Robbie has an actual piggy bank in his room, so I’m going to encourage him to use that until he’s too cool for it!)

One of the coolest things about the virtual apps is that you can teach kids about interest rates.  As in, if they save part of their allowance each week, the app calculates how much interest it earns.  (Of course, the parents have to pay that ‘interest,’ but I’m ok with that…it’s a really unique way to teach the value of saving!)  On the flip side, these apps also allow kids to take loans from their parents…complete with an interest rate they have to pay in return.  I’m totally using this idea once Robbie starts getting an allowance! 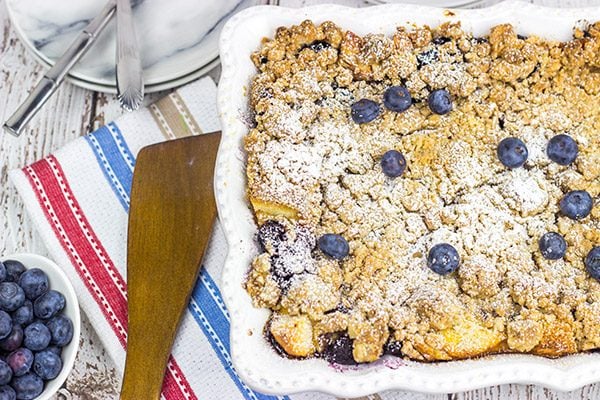 But enough money talk.  Let’s switch over to one of my favorite weekend breakfast recipes lately.  This Overnight Blueberry French Toast Bake is a fun (and easy) breakfast to serve on a lazy weekend morning.  Although, to be fair, lazy weekend mornings don’t happen much around here as Robbie likes to wake up with the sun.  (I did the same thing when I was a kid, so this is just the universe’s way of paying me back I guess.) 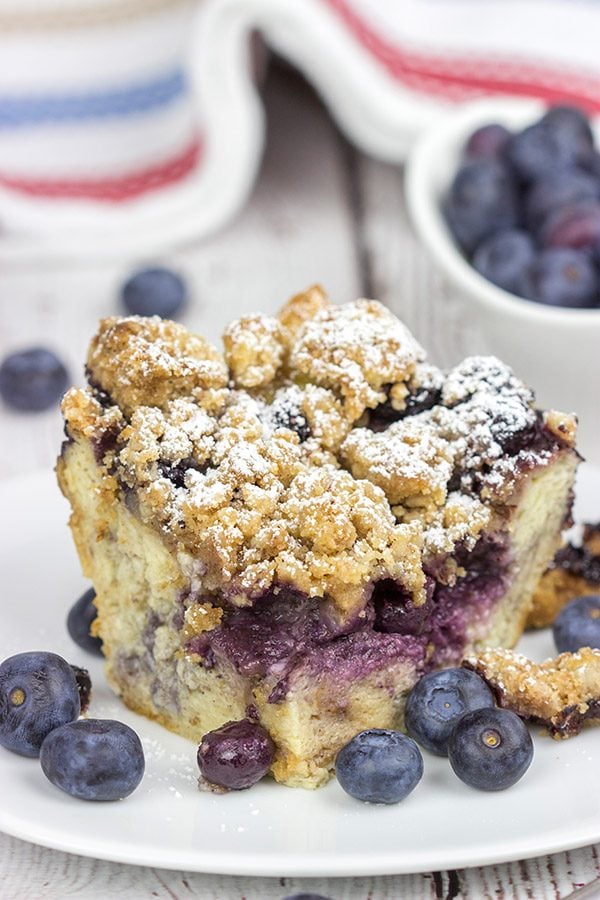 I love overnight recipes for weekend mornings, and this Overnight Blueberry French Toast Bake is quite delicious!  Laura was in the kitchen as I made this one, and she pointed out that it’s basically a breakfast version of bread pudding.  Hmmm.  I realized she was right.  The base is some day-old bread, and then you just pour in an egg + milk mixture.  Add a layer of fresh blueberries and a streusel topping, and you’ve got this Overnight Blueberry French Toast Bake.  We used blueberries for this version, but I’ve also made this one with other fruit, too.  (For the record, an apple version is amazing on a chilly Fall morning!)

As we head into the warmer months, keep this Overnight Blueberry French Toast Bake in mind.  It’s a tasty way to start a Saturday or Sunday morning!  Cheers, friends!

Looking for more blueberry recipes?  Try one of these! 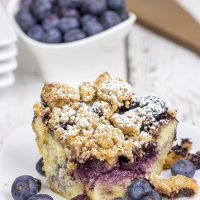 For the French Toast Bake

For the Blueberry Topping

For the Streusel Topping

For the French Toast Bake

For the Blueberry Topping