New Orleans Crawfish Bread is a Jazz Fest favorite!  Can’t make it to Jazz Fest this year?  Make a batch of this crawfish bread at home instead! 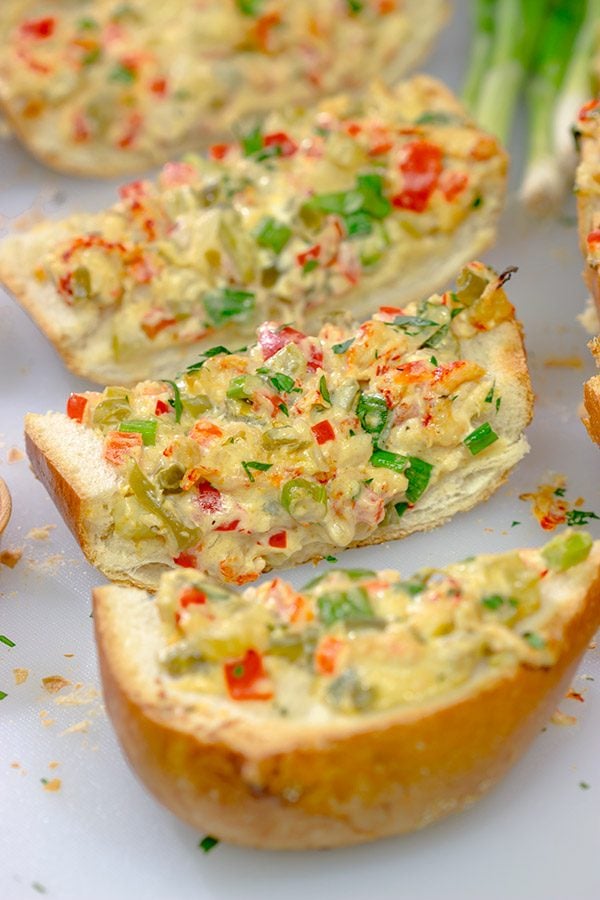 There aren’t many times when you can listen to a classic New Orleans brass band followed by Shaggy followed by Dave Matthews Band.  But that’s exactly what happens at the New Orleans Jazz and Heritage Festival.  Jazz Fest is held each year in late April, and I had the chance to go a couple of times back when I was living in south Louisiana.  From Dixieland to second-line drumming, New Orleans was at the center of the jazz revival that started in the mid-twentieth century. 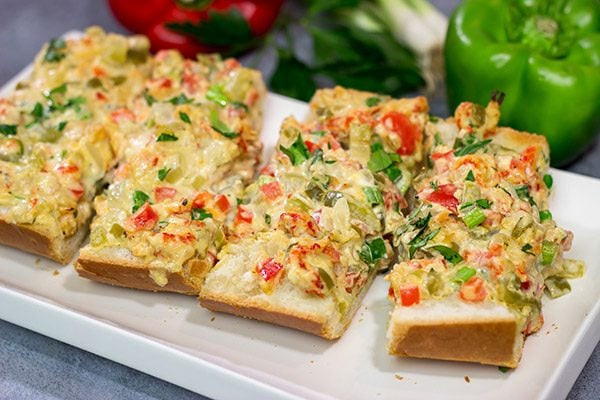 Jazz Fest was initially created in 1970 as a chance to celebrate local musicians.  However, the festival soared in popularity, and now it features an eclectic (and awesome) mix of local musicians playing next to nationally known performers.  I went to Jazz Fest in 2006 after Hurricane Katrina had devastated the city just months before.  It was amazing to see fans and musicians come together to support one of the great American cities.  (Jazz Fest is a major tourist event in New Orleans, and it brings significant revenue to the city and region.)

While the music might be the main calling card at Jazz Fest, the food is certainly not far behind.  Like any good event in south Louisiana, Jazz Fest is marked by same delicious local favorites.  In the application to be a food vendor, the rules strictly prohibit all “carnival food.”  So you’re not likely to find corn dogs and elephant ears at this festival.  (I have no issues with corn dogs and elephant ears, btw.)  Jazz Fest also requires all food vendors to be full-time Louisiana residents – I like that the festival maintains this local flare! 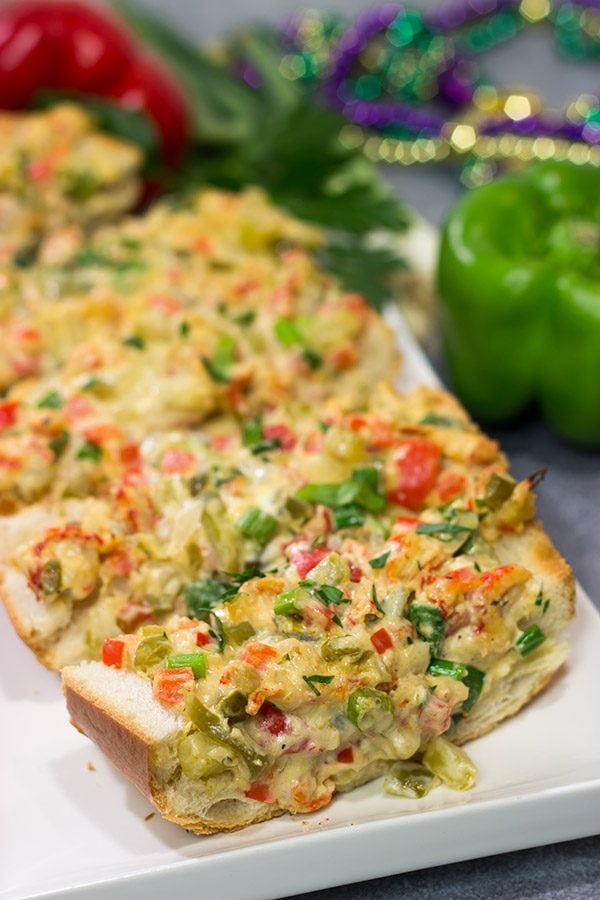 Jazz Fest even has a food tab on their homepage…after all, it’s south Louisiana.  You know good food will play a key role!  In addition to the classic boiled crawfish, you’ll stumble across some other amazing foods as well.  I’m talking alligator po’boys, softshell crabs, jambalaya, jalapeno bread, muffalettas, crawfish beignets, catfish meunière.  The list goes on.  Talk about one heck of a delicious list!  Another food icon at Jazz Fest?  New Orleans Crawfish Bread.

You know how you crave pumpkin and pecan pies at Thanksgiving?  Perhaps gingerbread around Christmas?  And then a good grilled hamburger on Memorial Day?  Well, crawfish bread is like that for me.  Crawfish bread is so iconic to Jazz Fest that I often crave this delicious recipe every Spring…right around the time of Jazz Fest. 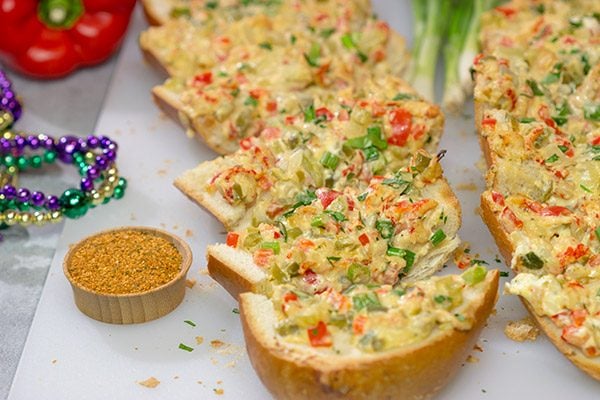 So what exactly is crawfish bread?  Well, you start with good Louisiana crawfish tails.  Crawfish are a quintessential food in south Louisiana, and peak season is typically March, April and May.  Perfect timing for crawfish boils in the backyard on those early Spring days!

Like many good Cajun recipes, New Orleans Crawfish Bread starts with sauteing up the holy trinity of Cajun cooking – onion, celery and bell peppers.  From there, you simply add some cream cheese, Cajun seasoning and shredded cheese.  (I used Cabot’s pepperjack cheese.  It’s a creamy cheese that melts well and brings a punch of spice – perfect for Cajun recipes!) 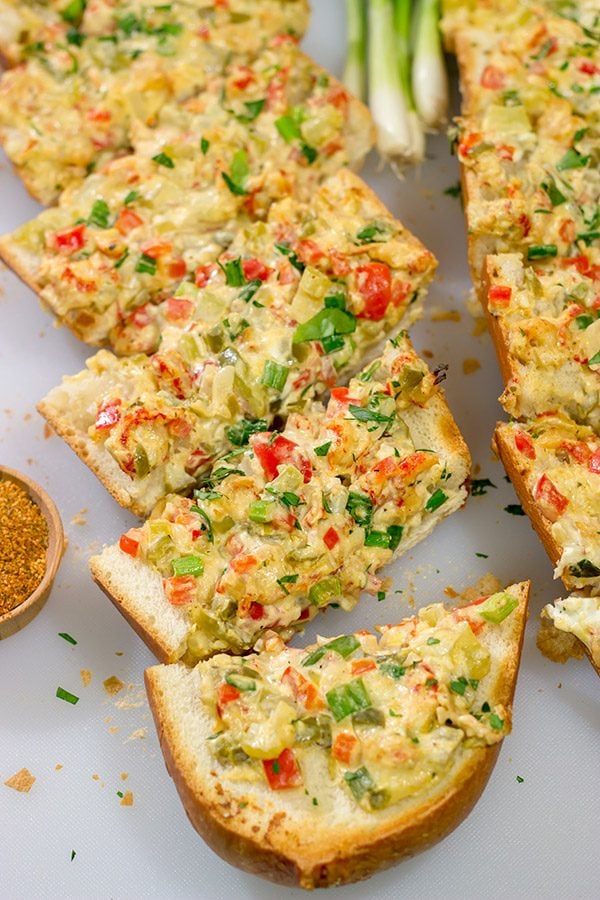 That mixture gets spread onto a halved loaf of French bread and baked in the oven for about 15 minutes.  Once it comes out, you’ve got one heck of a delicious appetizer!  We’ve served this New Orleans Crawfish Bread as appetizers, but we’ve also eaten it as a main dish alongside some roasted veggies.  No matter how you serve it, I promise it won’t last long.  Enjoy!  (Oh, and crawfish bread absolutely tastes better when you’ve got Preservation Hall Jazz Band playing in the background!)

Did you make this New Orleans Crawfish Bread at home?  Leave a comment, or snap a photo and tag me on Instagram (@Spicedblog)…I’d love to see your version! 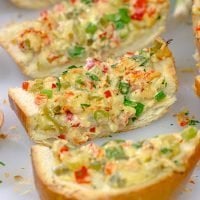 Wondering where to get crawfish?  There are a number of companies that will ship Louisiana crawfish (and crawfish tails). In a pinch, you could substitute Gulf shrimp into this recipe, too.

Looking for more tasty Cajun recipes?  Check out some of these other favorites, too: 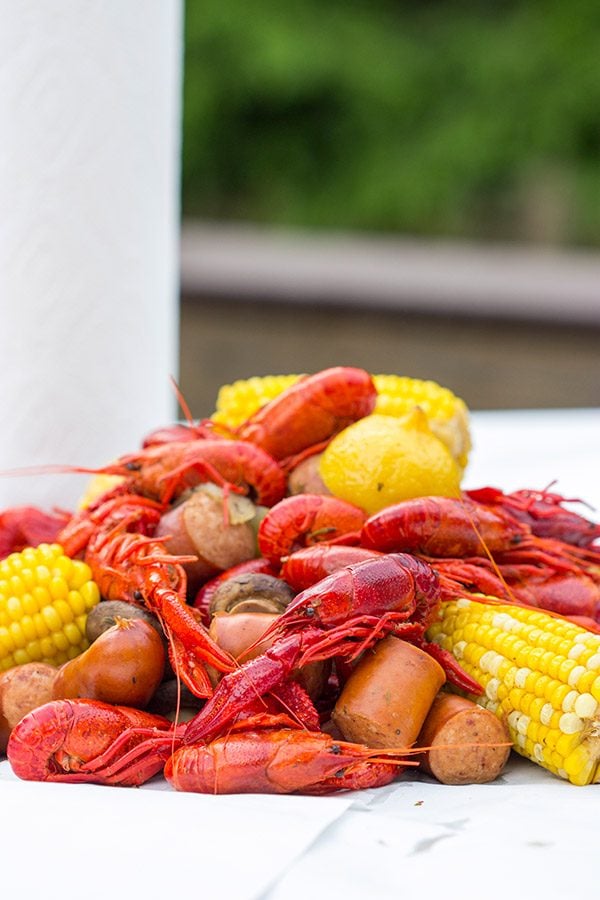 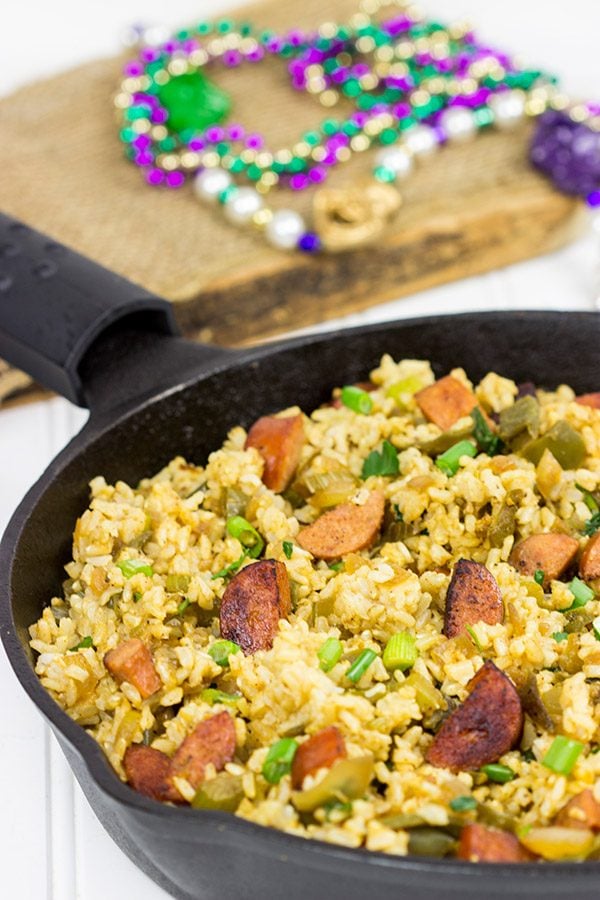 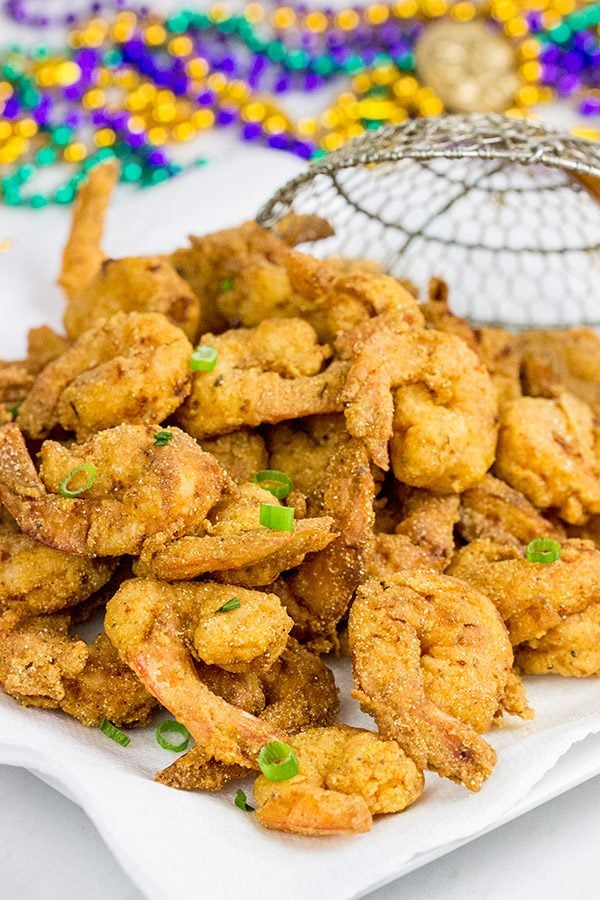