A Mardi Gras King Cake is an essential part of the festivities! This classic version features brioche-style bread filled with cinnamon. It’s delicious!

When I visited Louisiana for my first Mardi Gras a number of years ago, my friend who I was staying with had picked up a couple of King Cakes.  I had never heard of a King Cake.  I assumed it was something similar to birthday cake–and I was totally wrong!  King Cake is a Louisiana specialty that shows up by the dozens during Mardi Gras season.

Just like gumbo, there are probably hundreds of variations and ways to make King Cake.  I personally prefer the cinnamon-filled version, but flavored cream cheese is also very common. Either way, after I moved to Louisiana, I always looked forward to Mardi Gras as I knew it meant the arrival of these delicious treats.  (I might have even ordered a king cake for my birthday one year–and my birthday is nowhere near Mardi Gras!)

No matter the style or filling of your King Cake, these cakes are always decorated with the three colors of Mardi Gras: Purple, Green, and Gold (which represent justice, power, and faith).  King Cakes are typically decorated with either glaze or colored sanding sugar–I personally prefer the glazed version, but either way works just fine!  I did sprinkle my entire cake with a little bit of white sanding sugar when done for that sparkly look. 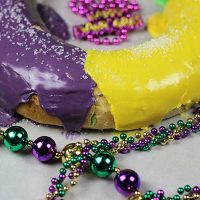 How to make a Mardi Gras King Cake

Finally, no king cake is complete without a baby inside of the cake.  Yes, a baby.  Once the cake is baked, a small plastic baby is inserted (from underneath) into the cake.  According to tradition, whoever gets the slice with the baby then hosts the next King Cake party–this great idea ensures that King Cake parties continue throughout the entire Mardi Gras season.  (King cake babies are available on Amazon!)

Note: The baby is not baked with the cake as it would melt!  Also, you should explain this tradition to your guests so that they are on the lookout for the baby.