This recipe for Homemade Pie Crust features an all-butter recipe.  It’s tasty, and it’s been my go-to pie dough recipe for years! 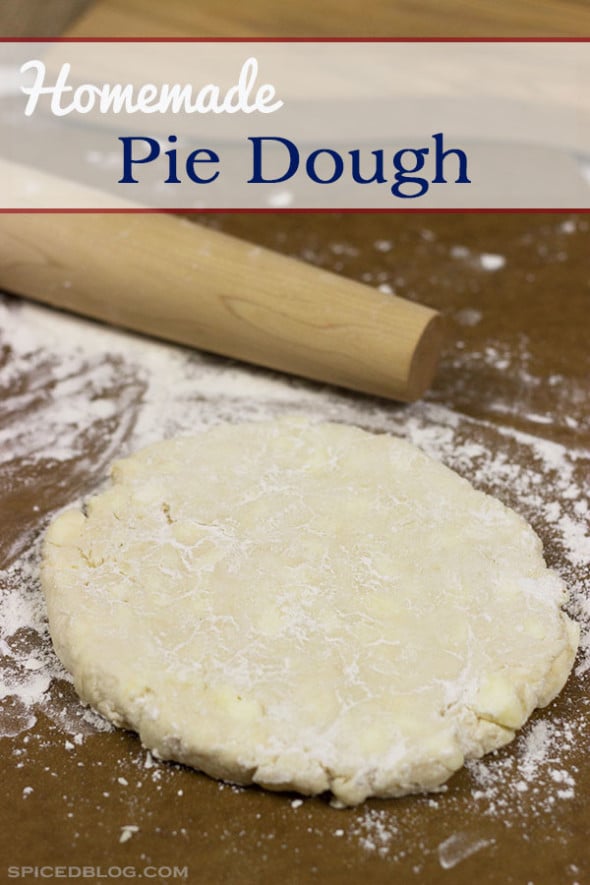 Over the years, I’ve heard lots of questions about making homemade pie dough. I’ve also heard all sorts of excuses why folks don’t want to make their own pie dough.  But guess what?  Homemade pie dough really isn’t that hard.  Sure, it takes a bit of practice.  It also takes longer than unwrapping a frozen pie shell from the store.  But Homemade Pie Dough tastes SO much better than the store bought stuff…and it’s way cheaper, too!  But here’s the thing–there are a lot of different versions of homemade pies.  This post is an attempt to categorize just a few of the more common techniques needed to make your own delicious homemade pie.

Keep the Butter Cold: One of the most important things about making pie dough is to keep the butter cold.  The goal here is to roll out your dough into a thin sheet, and you’re going to have a heck of a time rolling warm butter.  So store the butter in the fridge until right before you need it.  I often make the ball of pie dough and throw it back in the refrigerator for 15 minutes before rolling it out.  (The heat of the room and your hands can warm it up quickly.)  Sometimes I even put the rolled out pie shell in the fridge or freezer for a few minutes before adding the filling and putting it straight into the oven!

Use Enough Flour When Rolling: You’ll hear bakers say to be careful about how much flour you add when making pie dough.  True.  Too much flour can be a bad thing.  But pie dough stuck to the table when rolling is also a bad thing.  As soon as you notice your dough sticking to the table, lift up the dough and toss a small amount of flour under the dough.  Combine this idea with the cold butter from above and you you should have more success!  You should be able to move the dough around on the countertop without it sticking.

Use a Pastry Cutter: Pastry cutters allow you to quickly cut the butter into tiny pieces.  I used to cut butter into dough using two knives, but I find it SO much easier using a pastry cutter!

Patch It Up: It’s not the end of the world if your pie dough starts to tear.  This dough is pretty forgiving.  If it tears, just pull a small piece from a corner or edge and patch it up.  It might not look the best, but it will absolutely be fine in the oven!

Preheat a Baking Pan: Place a baking sheet in the oven when you begin preheating the oven.  Then put the pie on this baking sheet.  The hot surface will help the bottom of the pie bake faster…which keeps it from absorbing any liquid from the filling.  This means that the bottom of your pie will have a flakier crust.  If you happen to have a pizza stone, this is perfect for pies!  (Just keep the stone in the oven when you preheat it.)

Make It Early: Don’t stress yourself out trying to make the pie dough when your guests are arriving in 20 minutes.  Make the pie dough ahead of time, wrap it in plastic wrap, put it in a sandwich bag, and store it in the freezer.  Just make sure to thaw the dough in the refrigerator for about 12 hours before you need it.

The Rolling Pin is your Friend: Just like flouring the countertop, it’s also important to flour the rolling pin.  Be gentle with the pin and tell the pie dough where you want it to go when you roll it.  Also, lift up the pin before you reach the edge of the dough.  Otherwise your edges will be much thinner than the middle!  And when it comes to transferring the rolled dough into the pan?  Just flour your rolling pin, gently roll the pie dough onto the pin, move it to the pie dish, and gently unroll the dough into the dish. 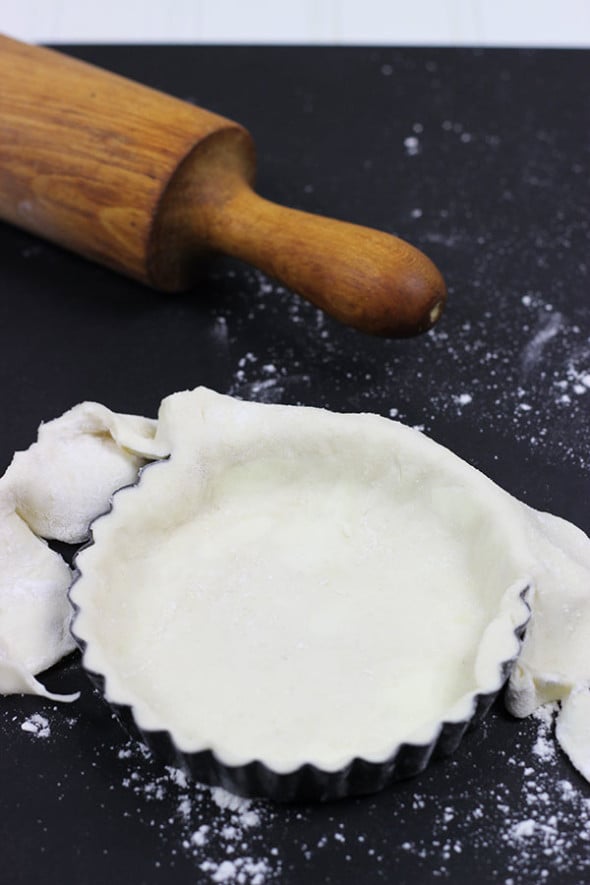 Single Crust.  This style of pie doesn’t include a top.  Instead, a single layer of pie dough is laid across the bottom of the pie dish and up the edges.  Single crust pies are often used for custards or meringues (Pumpkin Pie, Lemon Meringue Pie, Chocolate Pie, etc.)

Galette. Galettes are closely related to single crust pies, although they are typically a bit more rustic.  Instead of using a pie pan, galettes are often free form…giving them that rustic, homemade look that is perfect for an Autumn pie.  Check out these Rustic Apple Tarts for an example of galette-style pies.

Blind Baked Crust.  Pie crusts are baked “blind” when baked without a filling.  When baking blind, make sure to dock the crust by using a fork to lightly prick all over the bottom of the dough.  This allows the steam to escape when baking, thus keeping a flat bottom for your pie shell.  Another trick is to scatter a cup or so of dry beans across the bottom of the pie when baking blind.  The extra weight keeps the bottom shell in place.  (I then keep these beans in a small bag in the pantry and pull them out next time I bake a blind crust.)  This style is often used for cream-based pies (Banana Cream Pie, Coconut Cream Pie, etc.

Lattice Pie. Lattice pies are a cross between a single and double-crusted pies.  They feature a solid bottom crust, but instead of a solid top, the pie dough is cut into strips and then “woven” to create a lattice design.  The same types of pies that work for double-crusted also work for lattice (Cherry Pie, Apple Pie, etc.)  Check out this previous post I wrote on making a Bourbon Sour Cherry Pie using a lattice design.

Cut-outs. When making a double-crusted pie, it can be fun to roll out some extra pie dough and then use cookie cutters to cut out shapes.  These shapes can then be attached to the top of the pie using a little bit of beaten egg as “glue.”  One of my favorite ideas here is to cut out 5-6 leaves or apples and place them around the edges of an apple pie.  (Don’t forget to still vent the pie, though!)

Crust Designs.  While this last style isn’t technically a different style of pie, it does provide a way to be creative and fun with your homemade pies.

And finally, I can’t talk about homemade pies without suggesting to always sprinkle the top of the pie dough with a coarse sugar (such as turbinado) before baking.  A generous coating of coarse sugar gives the baked pie dough a wonderfully sweet, crunchy texture…the perfect addition to your favorite pie! 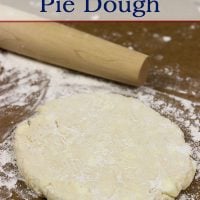 Note regarding amount of water: Start with the smaller amount (2 Tbsp) and gradually add more water as needed until the dough forms a single ball when compressed. The goal is to add only as much water as needed to hold the dough together. Sometimes this will be closer to 2 Tbsp and other times it may be closer to 4 Tbsp depending on humidity and other factors.