Now that Easter’s over, it’s time to get back to normal…which basically means no desserts for a while.  If you’ve been reading Spiced this past week, you know what I mean!  My wife and I have been enjoying Cadbury Creme Egg Milkshakes, Hot Cross Buns, Raspberry Kringle, and we still have a couple slices of Carrot Cake left.

While they were all delicious, I don’t want to see any desserts for at least a week or two.  Ok, maybe just today.  Either way, it’s time to focus on some savory food.  The weather is getting warmer, which means grilling season and fresh veggies and herbs from the garden!  I can’t wait!

We had some potatoes leftover from our Easter dinner, so I decided to have a bit of fun.  I’ve always enjoyed double-stuffed potatoes, so I set out to make a batch of those.  But then I decided to mix it up a bit, and I ended up creating these French Onion Stuffed Potatoes…they are amazing!

I basically used the ingredients for a delicious French Onion Soup, but I mixed them with mashed potatoes and then restuffed them into the potato skin.  Stuffed potatoes also freeze incredibly well, so make a large batch and then freeze the leftovers.  These will make an easy side dish for those nights when you get home from work late and don’t want to cook anything.

They do take a bit of time since the potatoes have to bake a couple of times, but that’s why you make extras to freeze for later!  I’ve included my recipe below, but with Stuffed Potatoes, the exact proportions are not all that important.  If you like cheese, throw some extra cheese in.  If you prefer vegetable instead of beef broth, then go with that.  Either way, you’ll have a delicious side dish for dinner! 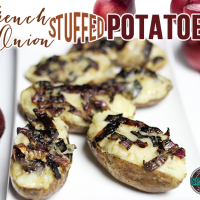