Mix up pizza night with a batch of Alabama White BBQ Sauce!  This Alabama Style BBQ Chicken Pizza is a delicious combination of flavors! 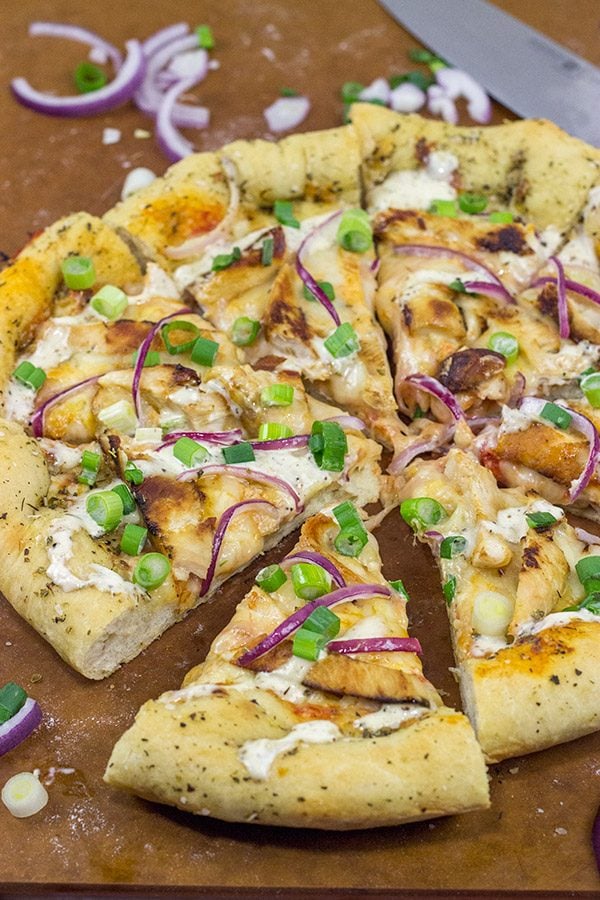 Whenever someone says “bbq sauce,” my tastebuds instantly think of the sweet, smoky and somewhat tangy flavor of a good tomato-based sauce.  While this style (known as the Kansas City style) is the most popular type of bbq sauce here in the States, it’s certainly not the only style.  When I was just 6 years old, my family moved from Texas to the Carolinas.  In Texas, barbecue refers to beef topped with tomato-based bbq sauce.  In the Carolinas, barbecue refers to pork with mustard-based sauce.  To this day, my Dad still tells the story of the first time he ordered bbq in the Carolinas.  Needless to say, he was a bit surprised.  (We’ll just leave that story there.) 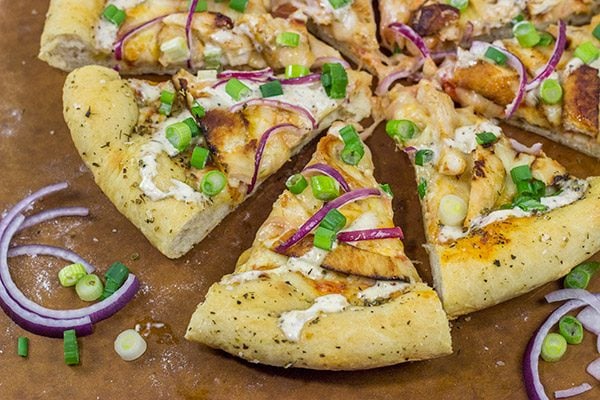 Barbecue sauces change quite a bit by region, and the unique ingredients often trace back to who settled that particular area.  For instance, the southern half of South Carolina was settled predominantly by Germans.  Pulling from that German influence, BBQ sauce in this area is typically a mustard-based sauce.  Very different than the ketchup-based sauces of the Midwest!  Before we get to today’s recipe (mmm…Alabama Style BBQ Chicken Pizza!), let’s do a quick tour of barbecue sauces by region.  Entire books have been written on this subject.  I find it fascinating, but the goal here is just a quick recap:

The Carolinas: As noted above, bbq sauce in the Carolinas is quite different.  This thinner sauce is often used as a mopping sauce to baste the the meat (as opposed to a thicker sauce that gets added after the meat is cooked).  Carolina BBQ sauce relies heavily on vinegar with little sugar.  The result is a very tangy sauce that some folks (ahem, my Dad) call sour.  In parts of South Carolina, mustard also works it’s way into the barbecue sauce.

Memphis: Another bastion of barbecue is Memphis, Tennessee.  Memphis-based sauces are very similar to Kansas City sauces.  However, Memphis-style sauces often have more vinegar, and they’re sweetened with molasses rather than sugar.  As a result of the added vinegar, Memphis sauces are usually tangier and a good bit thinner than Kansas City sauces. 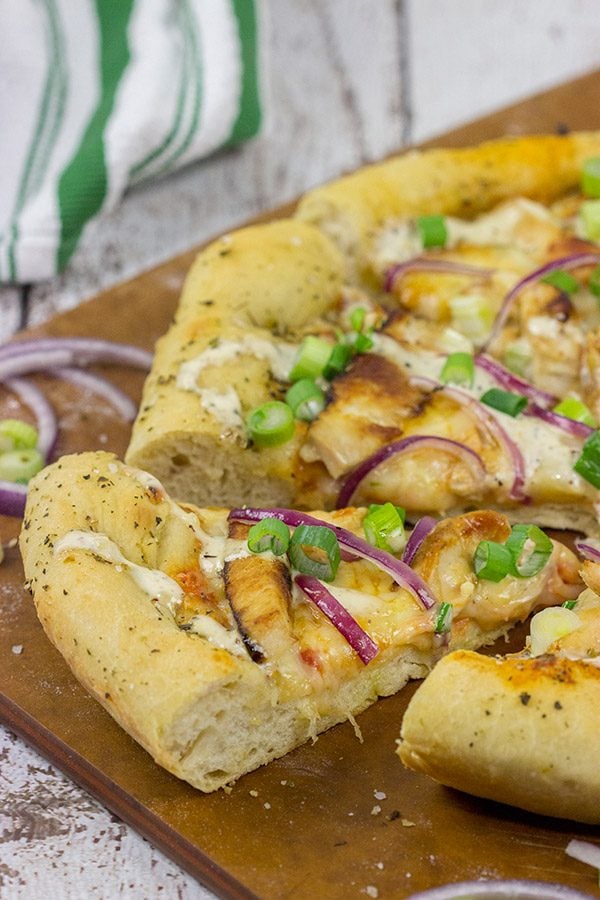 Focusing on the Alabama White sauce today, this Alabama Style BBQ Chicken Pizza is delicious!  And I took a slightly different turn with this pizza today.  I pulled out the cast iron skillet.  If you’ve been following this blog for a while, then you know that I love my cast iron skillet.  I use it for everything from cinnamon buns to steak.  And now we’re adding pizza to that list.  (Technically, this is the 2nd pizza as this Deep Dish Skillet Pizza happened a few years ago.) 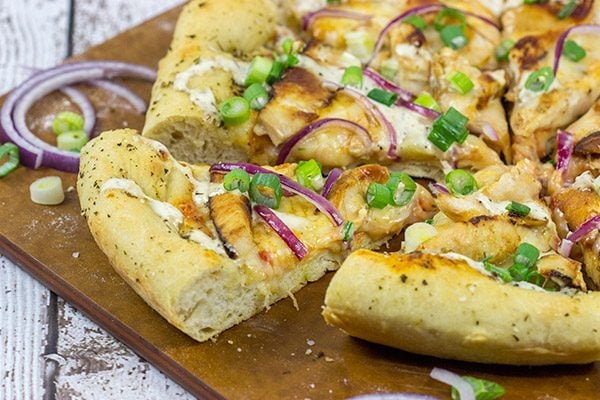 The cast iron skillet is super versatile for this recipe.  First, the chicken gets cooked in the skillet, and then the pizza dough goes in afterwards.  (The chicken gets transferred to a cutting board to rest.  Otherwise, you’d end up with chicken on the bottom of your pizza.  Hmmm, on second thought, that might be fun!)

Up until the end, this pizza is fairly standard.  Chicken, cheese and just enough tomato sauce to give the dough a wonderfully chewy and delicious texture.  Then comes the Alabama White sauce.  The sauce gets drizzled on the pizza after baking, and holy cow – talk about flavor explosion!  Truthfully, I used the leftover Alabama White as a dipping sauce for the thicker crust on this pizza.  Yum! 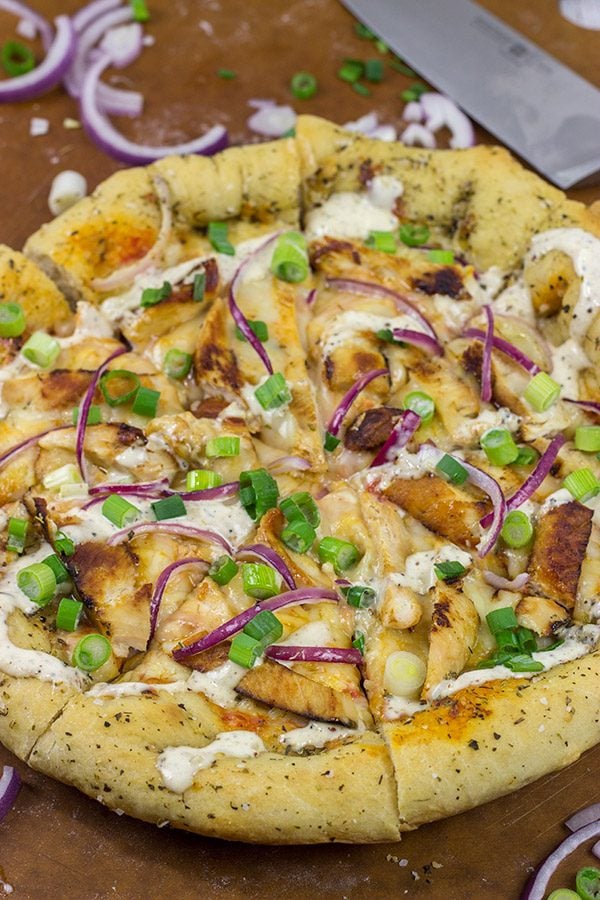 If you’re looking to mix up pizza night, then pull out the cast iron skillet and whip up a batch of Alabama White sauce.  This pizza is definitely one that will be on repeat here in our house!  Enjoy!

Did you make this Alabama Style BBQ Chicken Pizza at home?  Leave a comment.  Or snap a photo and tag me on Instagram (@Spicedblog)!

Looking for more fun pizza ideas?  Check out these other favorites, too: 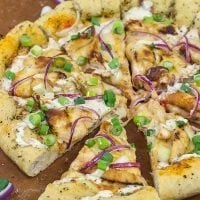 For the Alabama-style White BBQ Sauce

For the BBQ Chicken Pizza