This 3-Cheese Slow Cooker Pesto Chicken Pasta is cheesy and delicious…and it’s sure to keep you warm on these chilly nights! 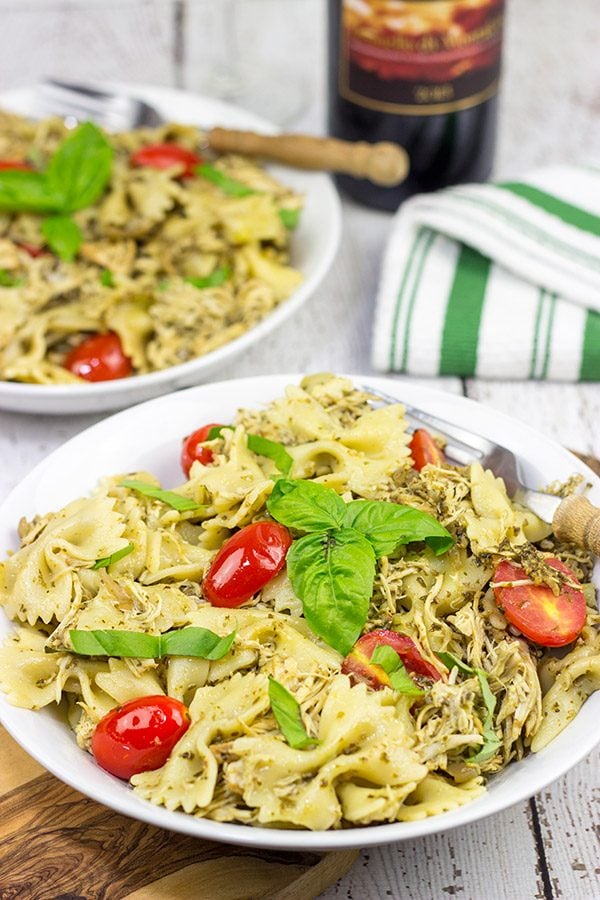 Whew.  That’s a title.  3-Cheese Slow Cooker Pesto Chicken Pasta.  It’s a mouthful for sure.  A delicious mouthful, but still a mouthful.  But each part is important.  If you’re serving this one to friends or family, they need to know it’s cheesy.  And they need to know about the pesto and chicken side, too.  And, of course, you (as the chef) needs to know about the slow cooker side of things.  Slow cook your way to an easy, delicious dinner with this 3-Cheese Slow Cooker Pesto Chicken Pasta! 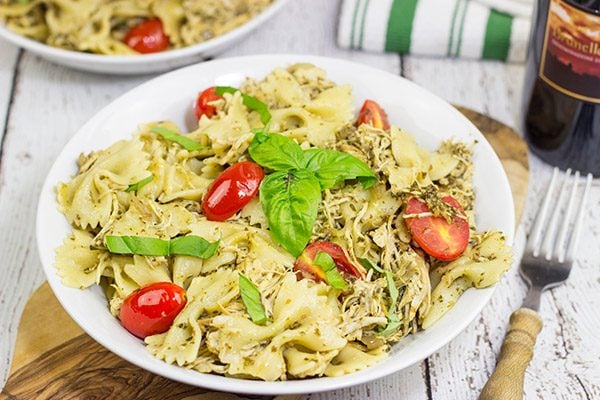 As I often like to do on the blog, let’s take a small detour from the food for a moment.  We’ll come back soon.  I mean this is a recipe blog.  But with Halloween around the corner, I always love exploring the supernatural side of things.

Last year, I wrote about how I may or may not have seen a ghost growing up in downtown Charleston, SC.  Our house was built pre-Civil War era, and my mom often said strange things happened around there.  Perhaps it was that experience as a kid, but Laura and I both love hearing about the supernatural.  I’m not saying I want to wake up in the middle night and meet a ghost.  I’m just saying we’re intrigued by the supernatural.  We enjoy watching those ghost shows on tv, and we often take ghost tours whenever we travel.  Our tour into the vaults underneath Edinburgh, Scotland remains one of my favorite ghost tours of all time…if a ghost tour can be a favorite, that is.

After college, I moved down to south Louisiana for a change of pace.  From Mardi Gras to the food to the college football, I love everything about south Louisiana.  And, sure enough, it didn’t take long before I made my way over to The Myrtles.  Have you heard of The Myrtles?  It’s a plantation home outside of Baton Rouge, LA that was built in the late 1700’s.  It’s one of many beautiful plantations scattered across southern Louisiana.  Oh, and it’s also one of the most haunted places in America.

Several friends and I went out to The Myrtles for a ghost tour of the property.  According to legends, the house is built on a Tunica Indian burial ground, and a number of murders have taken place in the house.  Only one of these murders can be documented historically, but that one is plenty enough for me!

One of the most famous photos of The Myrtles was taken back in the early 1990’s when the owner was documenting the property for insurance purposes.  When the owner looked at the photos she’d taken, she noticed something very peculiar.  There appears to be a shadowy figure standing between the two buildings.  A number of experts have looked at this photo over the years, and they’ve verified that it isn’t doctored, Photoshopped or altered in any way.  I don’t know about you, but that looks like the ghost of Chloe to me!  (Chloe was supposedly a household slave who poisoned the family.)  I want to believe that this was just a visitor to the plantation who happened to wander into the photo as it was being taken…but you can see the slats of the house through the figure!  Eep.

And then there’s this photo taken by a visitor to The Myrtles.  Is that a young girl in antebellum clothing looking out of the window?  I have no idea, but it’s enough to give me the chills.  That’s certainly not the standard ‘orbs’ (i.e. flecks of dust) that show up in most ghost shows.

Ok, enough creepy and spooky talk for now.  I love reading about haunted houses and the paranormal (especially around Halloween time each year), but a little bit goes a long way for me!  Oh, and did you know that you can actually book a room at The Myrtles?  Maybe you should head down there and see if you catch something strange in a photo? 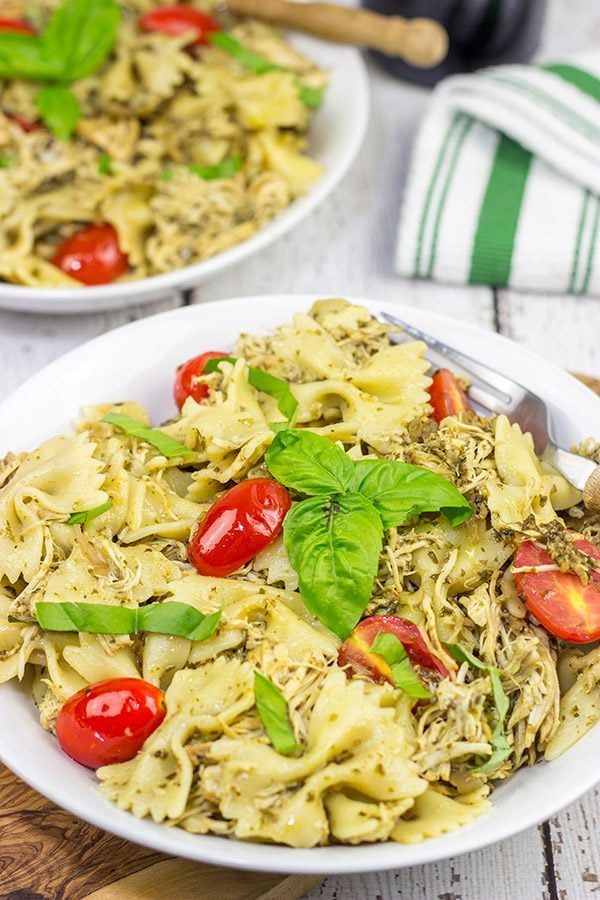 Back to this 3-Cheese Slow Cooker Pesto Chicken Pasta.  This pasta came about as a result of this Pesto French Bread Pizza with Grilled Chicken.  I love French bread pizza, and that pesto version is quite tasty.  So the other day, I decided to mix things up a bit, but still use the same flavors.  Since we’re heading into slow cooker season, I decided to turn that recipe into something that could be cooked in the slow cooker. 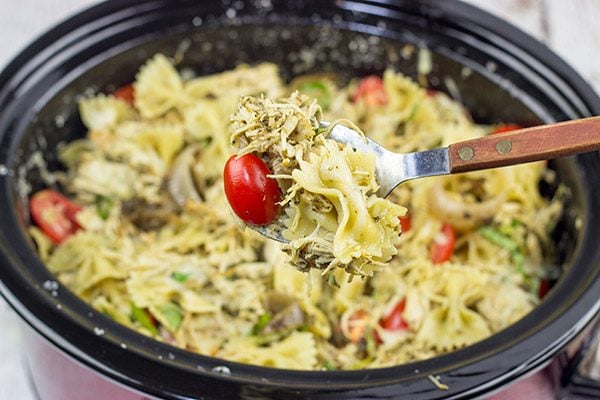 This 3-Cheese Slow Cooker Pesto Chicken Pasta is delicious!  Basically you let the chicken slow cook with a bunch of pesto while you’re at work or running around doing errands.  Then about 30 minutes before dinner, you just cook up the pasta and toss it into the slow cooker along with a mix of melty cheeses.  The result?  A cheesy, pesto-y (is that a word?) pasta with shredded chicken.  It’s the perfect easy meal to keep you warm on these chilly nights!

If you make a batch of this 3-Cheese Slow Cooker Pesto Chicken Pasta, take a photo and tag me on Instagram (@Spicedblog).  Or come back and leave a comment!  Cheers, friends! 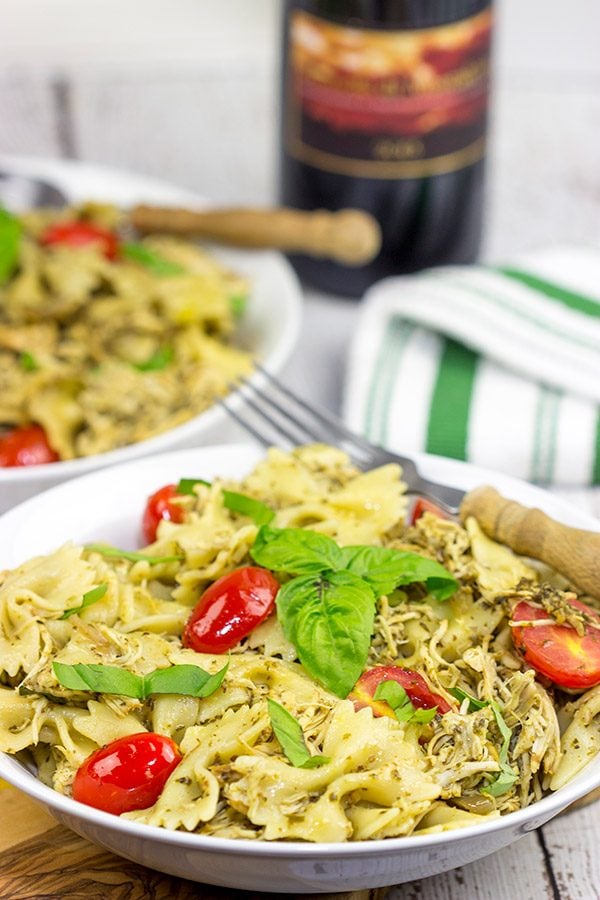 Love slow cooker meals?  Try some of these other favorites! 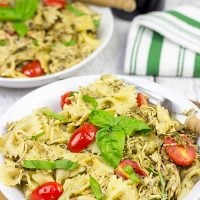