This tasty Pesto Chicken Manicotti is baked in a creamy alfredo sauce and then topped with fresh basil pesto!

Do you guys know who had the #1 best-selling CD of 2016?  Hint: It’s not Adele…or Bieber…or Beyonce.  In fact, if you don’t already know, then I promise you’ll be guessing for a long, long time on this one.  One of the first things we learned about Robbie is that he likes music.  He has a particular affinity for bluegrass (not kidding!), but honestly he likes it all.  And of course we use this to our advantage. 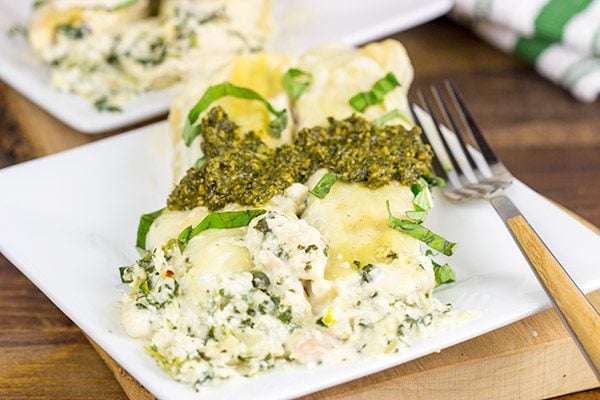 We have a little portable speaker that connects wirelessly to our phones, and at any given time you can find Robbie cruising along holding that speaker.  Sometimes it’s pumping out bluegrass, but Mom and Dad have grown a bit tired of that one, so Journey has made an appearance or two on his speaker lately.  (Can you guess who was controlling Pandora at the time?)  Over the weekend, though, we re-discovered the music channels on tv.  You know the ones, right?  They’re all of those high channels in the cable package.  They just play commercial-free all day which is great for Robbie.  It’s also great for us because it keeps our phones free for more important things.  Like Candy Crush (*looks at Laura*) or Clash of Clans (*ahem* me *ahem*).

We had the classical music channel on the other morning, and it was actually pretty nice.  I was reading some of the fun trivia that pops up on the screen about the current song, and that’s when I discovered the #1 best-selling CD of 2016.  Spoiler alert: It was indeed classical.  Curious who?  Mozart.  Dead serious.  Wolfgang Amadeus Mozart had the #1 best-selling CD of 2016. 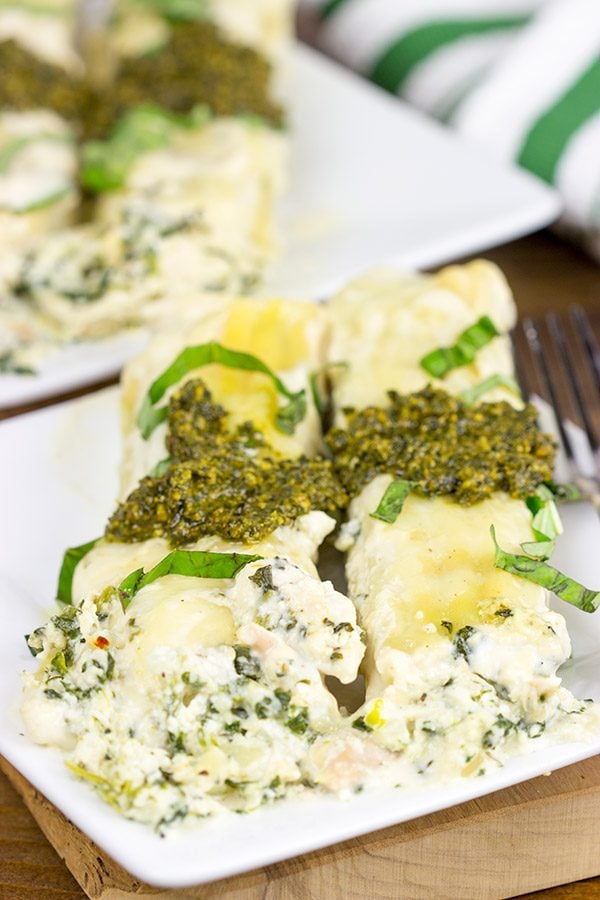 So how did a guy who died 225 years ago top the list in 2016?  That’s where a bit of fuzzy math (i.e. math for non-engineers) comes in.  You see, a new box set featuring every known piece of Mozart’s music was released last year.  In case you’re wondering, that’s about 240 hours of music.  The box set includes 200 CD’s.  Yes, 200.  Billboard counts every album in a box set as an individual sale, which means it only took 6,250 sales of Mozart’s box set to catapult him to the top of the list ahead of Adele, Bieber and everyone else in 2016.  However, that box set isn’t cheap.  Amazon sells the set for about $500.

So while Robbie was cruising around listening to classical music and playing with his new barnyard toy set, I got into the kitchen to make some dinner.  We have a lot (a lot!) of pesto in our freezer right now, so I figured some sort of pesto pasta dish was in order.  (Each year, I take the basil from the garden and turn it into pesto bombs.  So we always have a ready supply of homemade pesto for pasta, soups, etc.)  I also happened to have some leftover rotisserie chicken.  And that’s how this Pesto Chicken Manicotti was born! 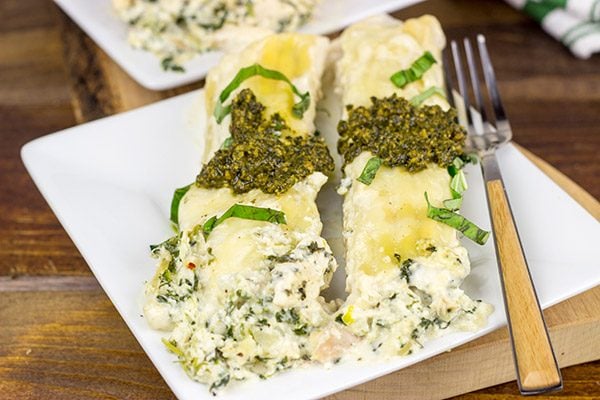 Manicotti is such a fun pasta dish.  Sure, manicotti (like lasagna) takes a bit of time to make as you have to fill each shell.  But it makes a nice big batch, so it’ll feed a crowd.  Or it’ll make leftovers for a couple of days.  (We love leftovers around here for busy weeknights!)  This Pesto Chicken Manicotti was a huge hit.  We served up two manicotti each and then loaded our plates with a side of roasted broccoli. 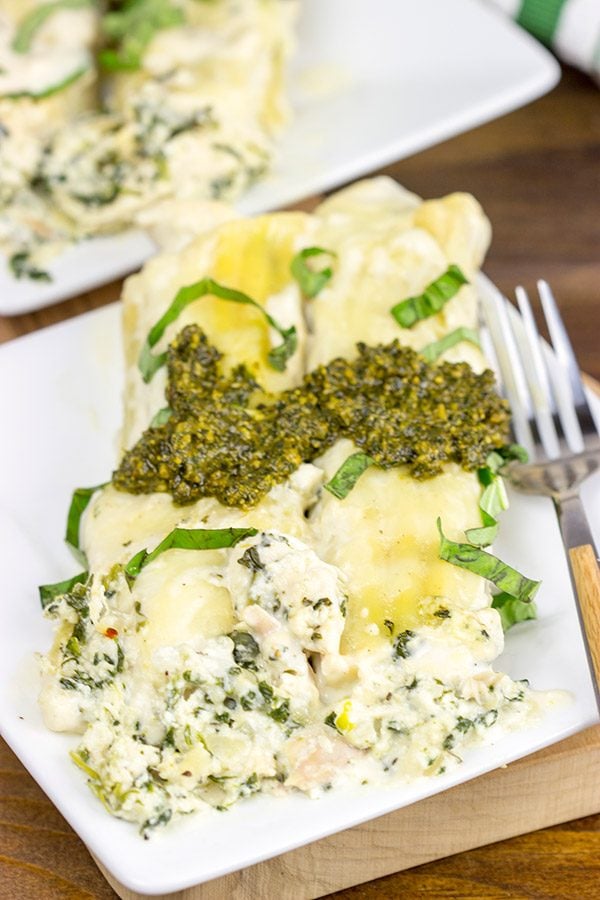 One tip about making this Pesto Chicken Manicotti is to just use your hands to fill the manicotti.  Usually I use a pastry bag or a large sandwich bag to fill manicotti shells, but this filling was a little more difficult due to the shredded rotisserie chicken.  I just found it easier to get in there and use my hands to fill each shell.  Just a handy tip to file away in case you make this manicotti.  And for the record, this Pesto Chicken Manicotti goes really well with a glass of wine and some Mozart.  Cheers!

To save time, feel free to use chopped rotisserie chicken in place of the cooked + shredded chicken!

Looking for another fun pesto pasta dish?  This Pesto Pasta with Grilled Chicken is a staple in our house…and it can be served either hot or cold! 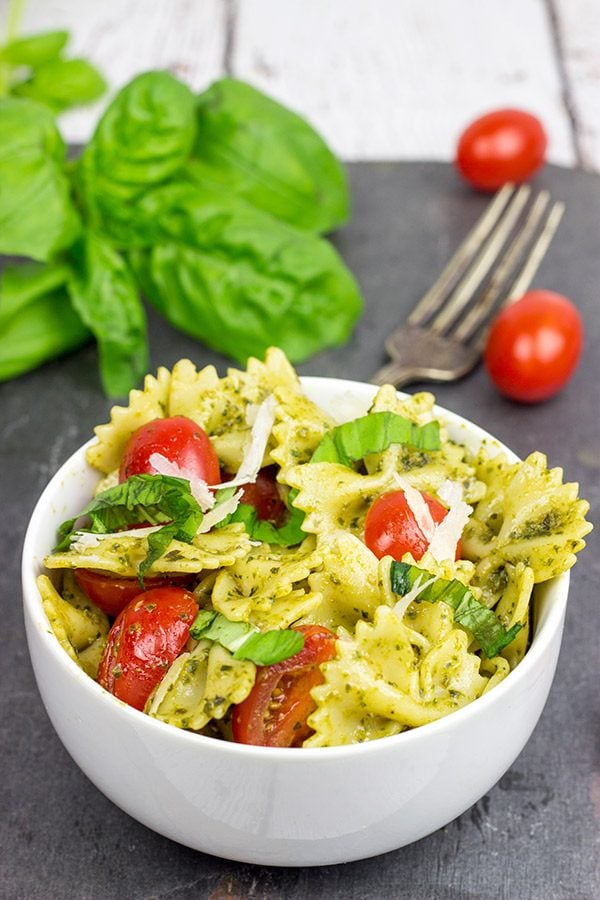