If you’re looking for a tasty summer side dish, then look no further!  This Vidalia Onion, Bourbon and Sorghum Vinaigrette with Black Eyed Pea Salad is packed with flavor! 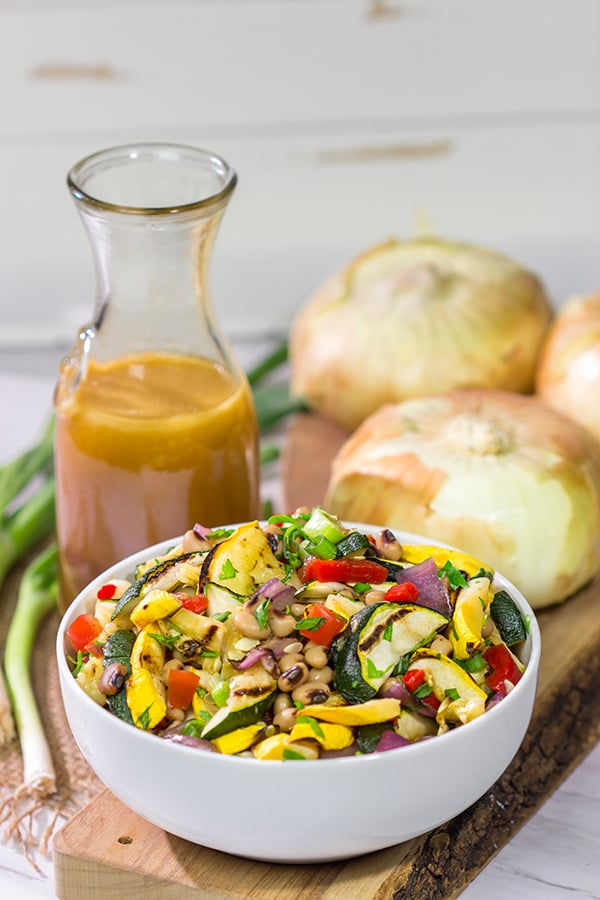 Some number of years ago (more than I care to admit), I found myself driving through southern Georgia in one of the worst thunderstorms I’ve ever seen.  I was heading to a work retreat down on the coast, and I hit a spring storm.  This wasn’t just any storm.  This was a true gully-washer of a storm.  It was the kind of rain where you couldn’t see more than 20 feet in front of you.  I actually pulled over to let the worst of the storm pass. 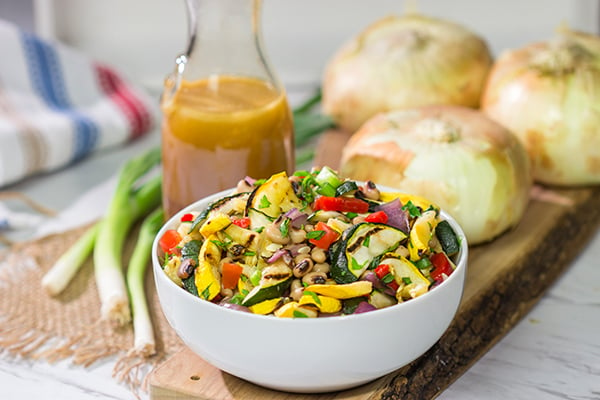 As the storm passed and I got back on the road, I passed a sign that said “Welcome to Vidalia – the Sweet Onion City.”  Up until that point, I didn’t realize that Vidalia was an actual city.  Sure, I knew of Vidalia onions, but I didn’t realize their namesake is a city in Georgia.  And as I drove through town, the biggest rainbow I’ve ever seen stretched across the sky above me.  It was a pretty awesome experience!

Rainbows are one of those sweet moments in life.  Think about it.  Whenever you see a rainbow, you probably stop and look, right?  I know I do!  In fact, I remember “chasing” a rainbow through town last summer with my 4-year-old son in the backseat.  The rainbow kept peeking out from behind clouds, and we kept driving to different parking lots looking for it.  He still talks about our “rainbow hunt,” and I suspect those fond memories will stick with me for many years. 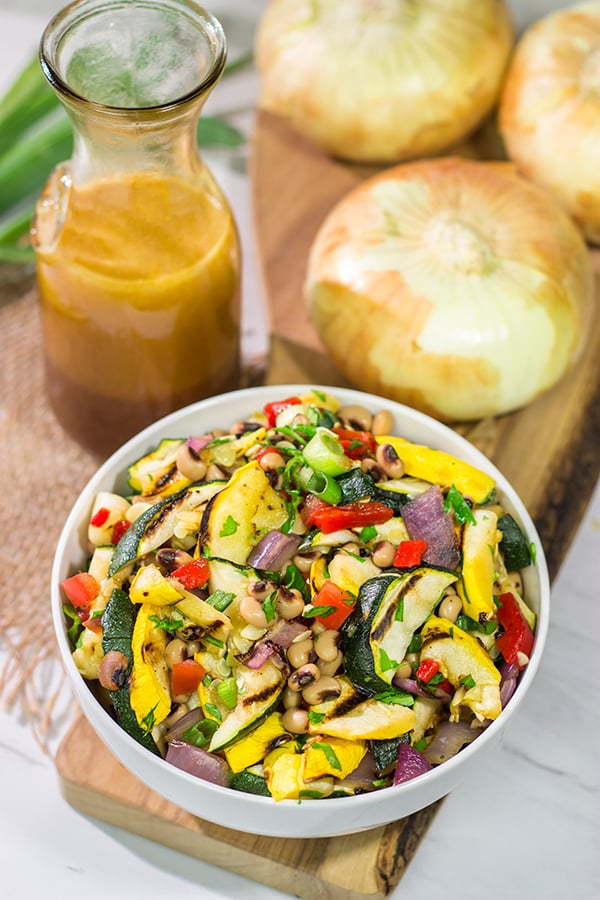 Vidalia Onions and the Kentucky Derby

Switching gears a bit, let’s move from Vidalia, Georgia to actual Vidalia onions.  These sweet treats are truly a seasonal crop.  They first hit stores in April, and the season typically runs through August or September.  I know I always get excited when the first Vidalia onions start showing up in our grocery stores!

Not all sweet onions are Vidalia onions.  In fact, Vidalia onions can only be grown in the weather, water and soil conditions that are uniquely found in 20 south Georgia counties.  This region has an unusually low amount of sulfur in the soil, and this contributes to the sweet flavor of Vidalia onions.  As Vidalia onions hit the store shelves near you, definitely pick up a couple. 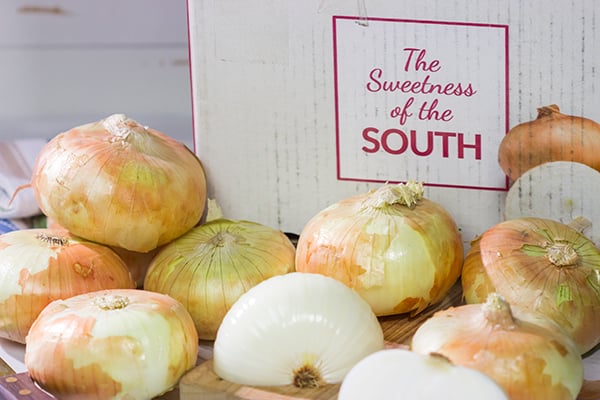 This year, the Vidalia Onion Committee has partnered with the Kentucky Derby to highlight several fun recipes featuring Vidalia onions.  Among those recipes is this Vidalia Onion, Bourbon and Sorghum Vinaigrette with Black Eyed Pea Salad.  This recipe is unique and delicious!

For starters, the vinaigrette features sorghum syrup.  Sorghum is often seen in its grain form, but we’re talking about sorghum syrup here.  Sorghum syrup – often called sorghum molasses – is very common in the Southern states.  This thick, golden syrup is used to sweeten recipes.  It’s similar to molasses and honey, but with more depth of flavor.  I recommend trying it if you’ve never had the chance! 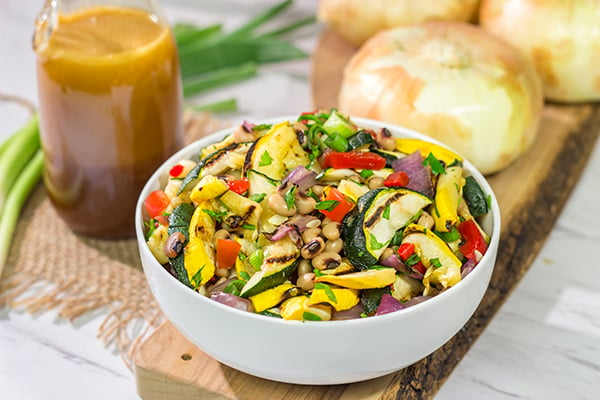 In addition to the sorghum, the vinaigrette also features a bit of grated Vidalia onion.  Oh, and then there’s bourbon, too!  All of these ingredients combine to create a rather tasty (and easy to make) vinaigrette.  We enjoyed the vinaigrette over this Black Eyed Pea Salad, but we also used the leftovers on a leafy green salad.  It was a fun way to mix things up a bit, and I suspect we’ll be making this vinaigrette regularly now.  (It’s great for when you’re entertaining and want to serve something slightly different and unique!)

Growing up in the South, black-eyed peas were a staple at our dinner table.  However, this Black Eyed Pea Salad takes those peas to a whole new level.  This salad has so many layers of flavor thanks to the vinaigrette as well as the grilled veggies.  It is quite tasty, and it makes for a great side dish for all sorts of summer meals. 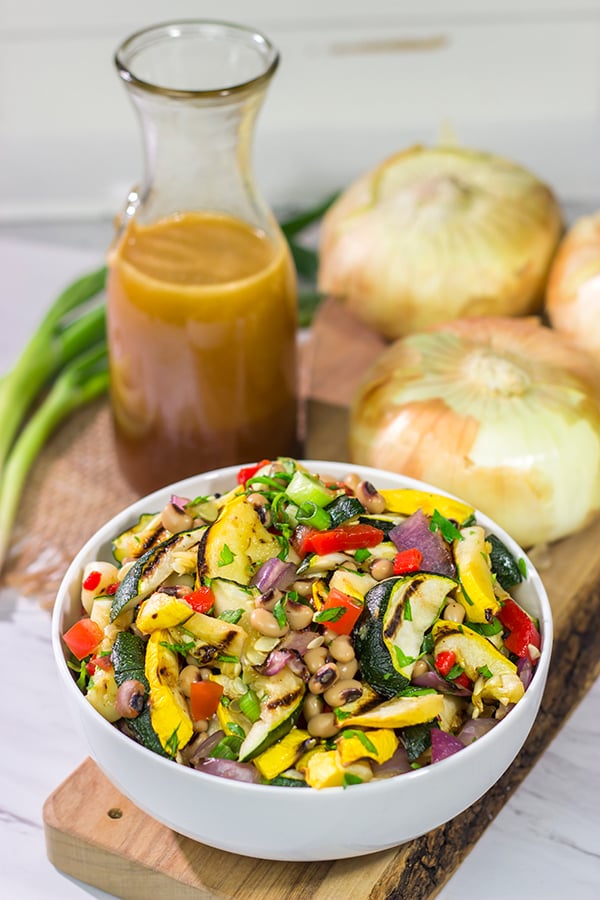 Are you planning on watching the Kentucky Derby this year?  As the Run for the Roses usually occurs in early May, it means the weather here in upstate New York is finally starting to warm up.  And when the weather warms up?  My grill comes out!  This year, I’ll be putting more zucchini and squash on the grill for another round of this Black Eyed Pea Salad.  Oh, and make sure to stop by the Kentucky Derby website for more tasty recipes as well as tips on hosting at-home Derby parties.  Cheers!

Did you make this Vidalia Onion, Bourbon and Sorghum Vinaigrette with Black Eyed Pea Salad at home?  Leave a comment, or snap a photo and tag me on Instagram (@Spicedblog) – I’d love to see your version! 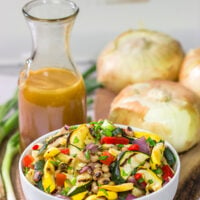 For the Black Eyed Pea Salad

For the Black Eyed Pea Salad

The vinaigrette recipe will produce 2 total cups.  ⅓ of a cup will be used for the black eyed pea salad.  The remaining vinaigrette can be refrigerated in an air-tight container for up to 2 weeks.  (It's delicious on a leafy green salad, too!) Recipe courtesy of the Vidalia Onion Committee. 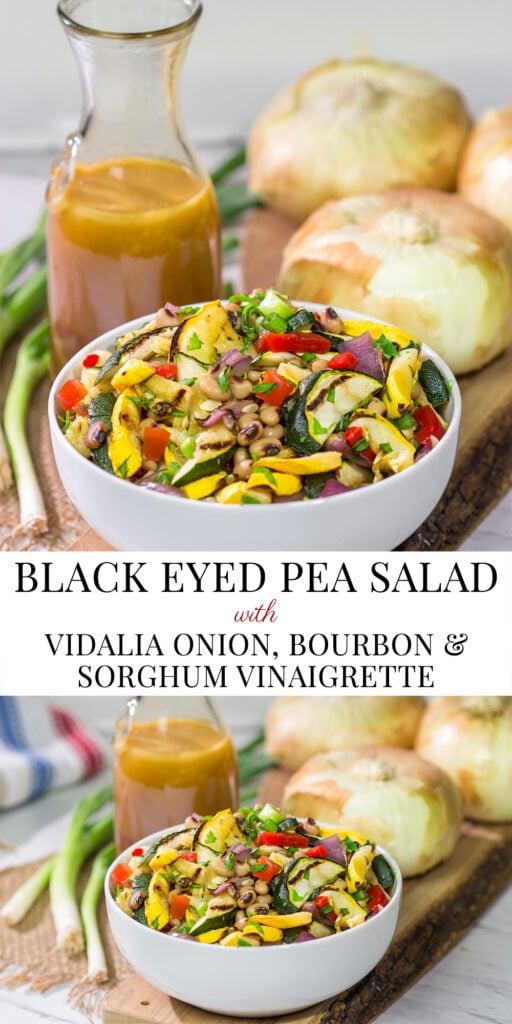 Looking for more summer side dish recipes?  Check out these other favorites, too: 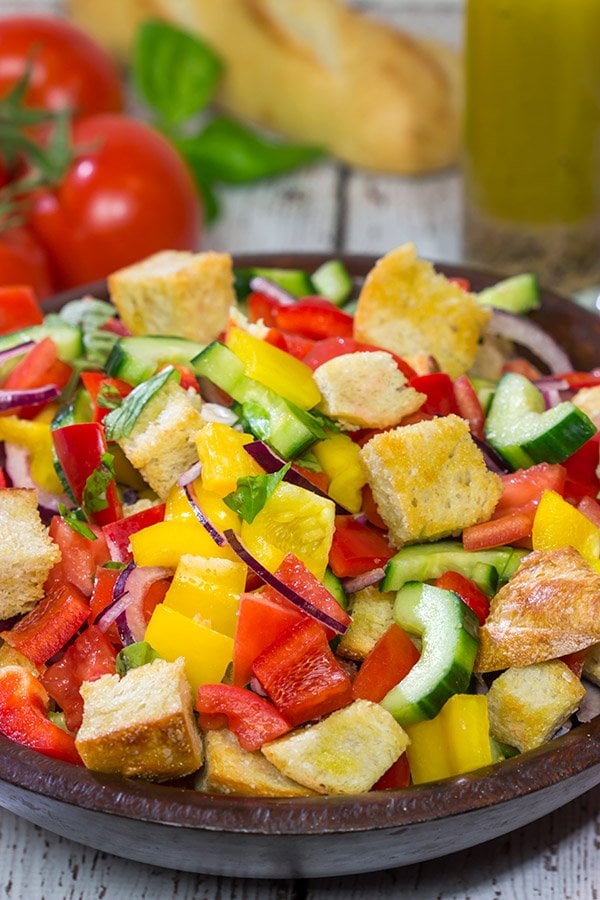 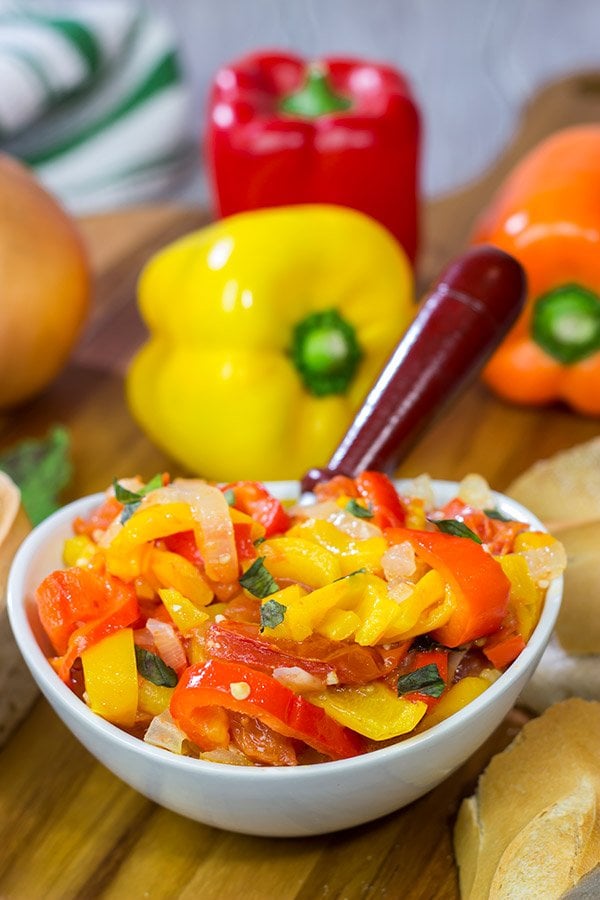 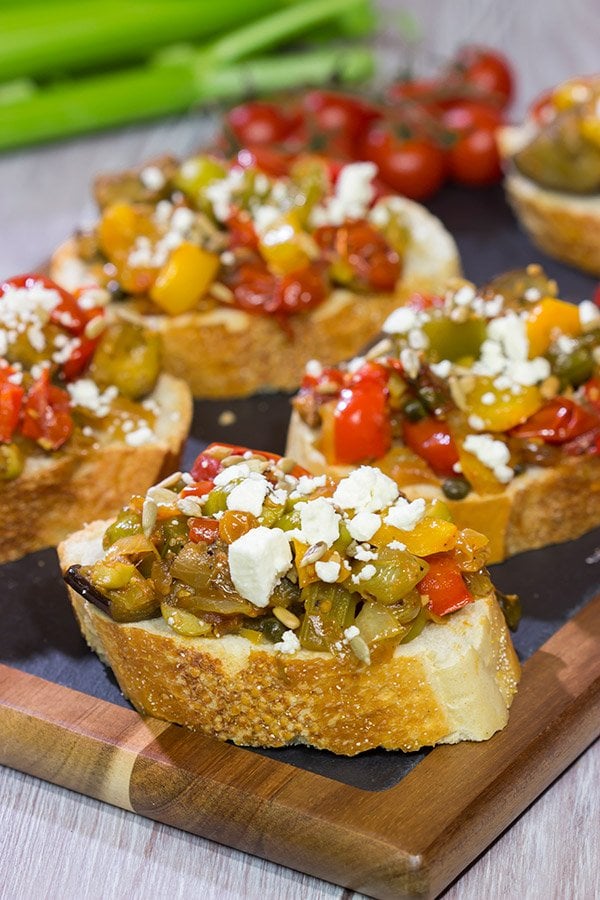