Ever tried burrata cheese?  It’s in the mozzarella family, and it makes for a great centerpiece of this Tomato and Burrata Caprese! 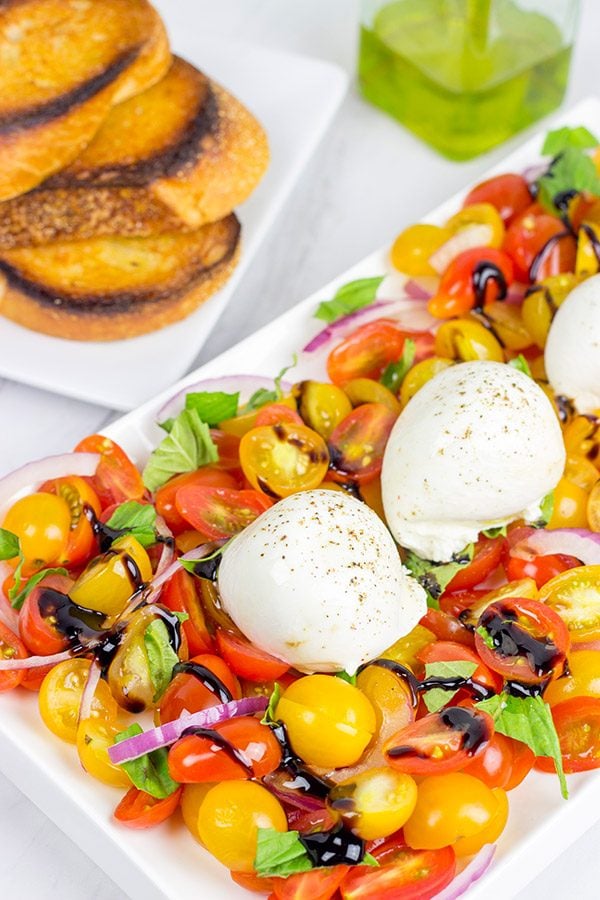 There’s somewhere around 7.5 billion people in the world.  That’s a lot of zeros.  And there’s somewhere around 320 million people in the US.  That’s still a lot of zeros.  But despite these numbers, the world has a strange way of being a small place.  Case in point: Belton, South Carolina.  As I’ve mentioned before, I grew up in Charleston, SC, and my sister and I spent the better part of our summers either selling lemonade in Charleston or romping around our grandparent’s huge backyard in Belton.

I’ve lived all over the south, but Laura and I made our way north back in 2011 when she got a job offer.  A couple of years later, Laura was on a recruiting trip for work in Pittsburgh.  She ended up meeting a grad student who was finishing up her degree at the same college where Laura went to undergrad.  Long story short, the recruiting trip was a success and that grad student got a job up here in upstate New York, too.  (Erica has ended up being one of our closest friends up here!) 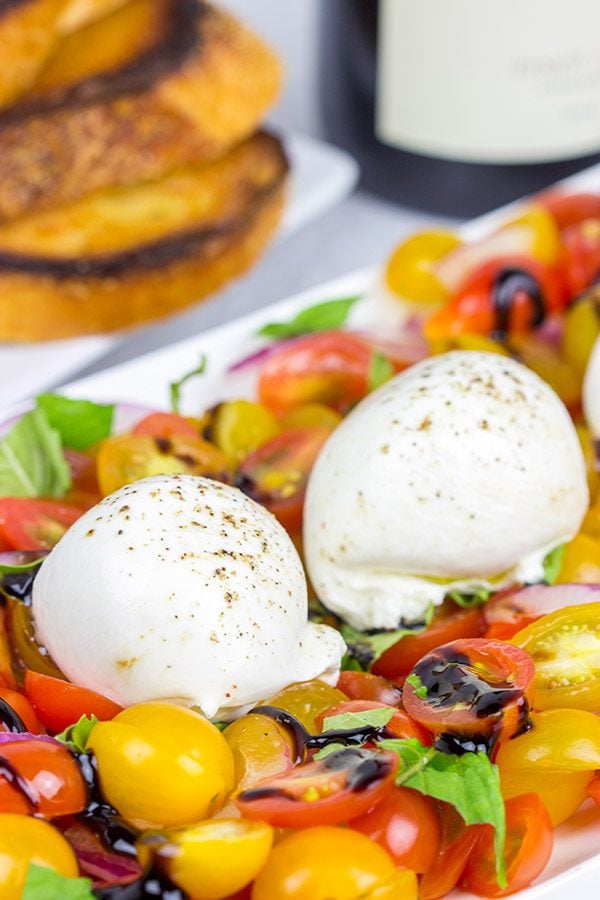 But back to the world is a small place story.  It turns out Erica grew up in Charleston, SC, too.  So we certainly had plenty to talk about there.  When Erica made the move from Pittsburgh up to our area, her Mom came up with her to help her settle in.  We offered to take them out to dinner one night, and so we all piled in the car and headed up to our favorite brew pub in Saratoga.

On the way up, we got to chatting about Charleston and growing up in the South.  Erica’s mother mentioned that she grew up in a small town in upstate South Carolina near Anderson.  Wait.  What town near Anderson, SC?  Sure enough, her mother was born and raised in Belton.  The same Belton where my grandparents lived for their entire lives.  And to put this all in perspective, Belton has a population of around 4,000.  Yeah, not that many zeros.  What are the odds that we would end up in a car way up here in New York with someone from Belton, SC?  Slim at best.  But it happened! 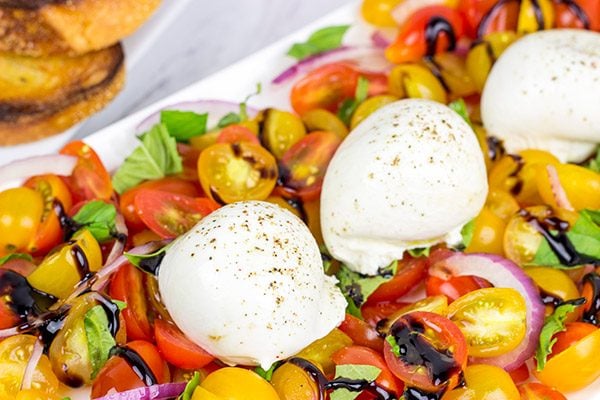 Needless to say, we’ve become great friends with both Erica as well as her parents.  Whenever they come up to visit, we often get together at least 2-3 times to hang out and eat delicious food.  On their last trip up, they mentioned they found burrata cheese at our local grocery store.  I wasn’t familiar with burrata, but they told me that one of their favorite appetizers at Carrabba’s Italian Grill is a tomato and burrata caprese salad.  I was intrigued. 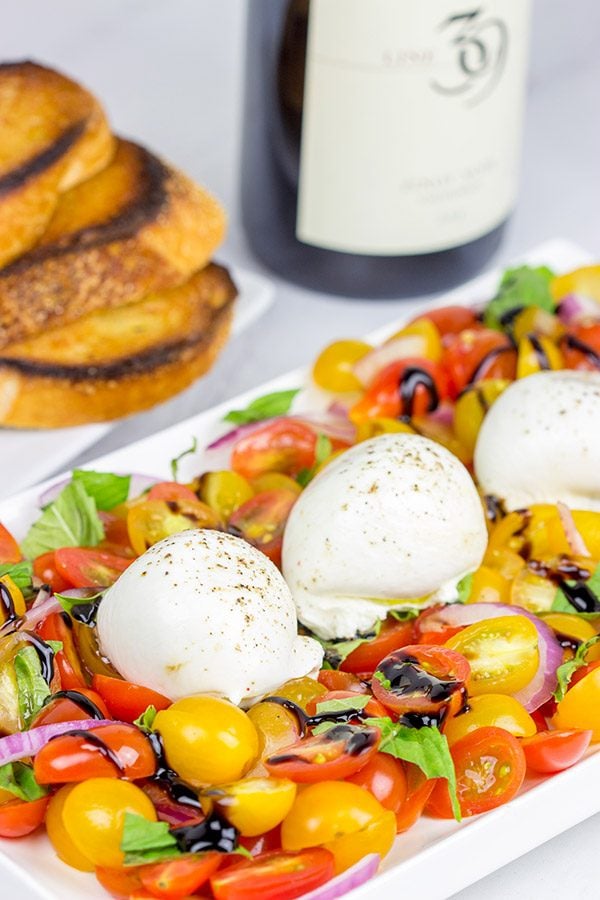 We got to talking about burrata cheese, and soon enough I headed out to the store to grab some burrata.  I also picked up some cherry tomatoes.  Toss in a loaf of chewy, Italian bread, and you’ve got the makings for one tasty appetizer!  This Tomato and Burrata Caprese was inspired by the appetizer at Carrabba’s.  In truth, it’s just a simple mix of halved cherry tomatoes, fresh basil and balsamic glaze.  But the star of the show is the addition of the burrata cheese!  (Well, that and the Italian bread.  I’m pretty sure I could eat an entire loaf of Italian bread in one sitting.) 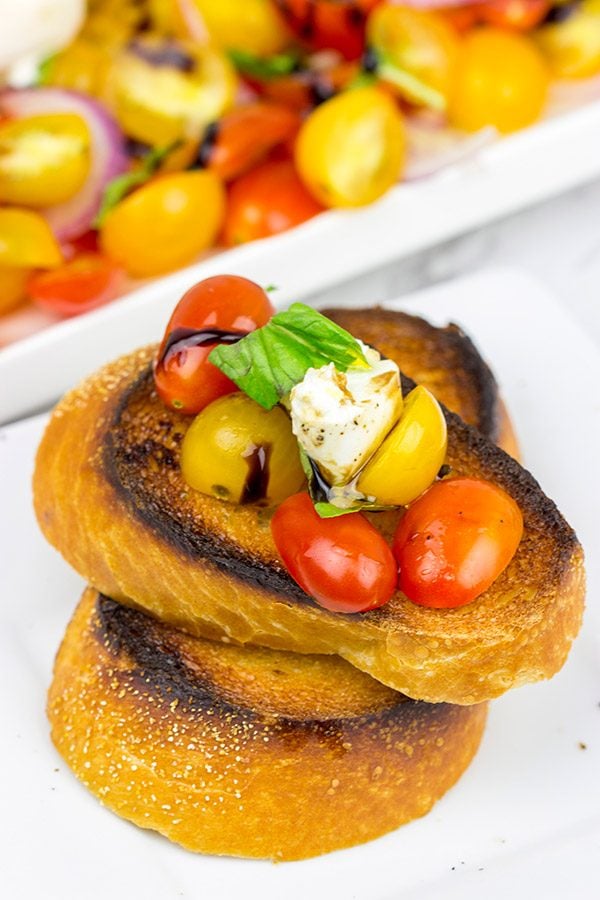 Burrata, which means ‘buttered’ in Italian, is a cheese from the mozzarella family.  It’s essentially a fresh mozzarella ball filled with a mixture of cream and shreds of mozzarella.  The result is an incredibly creamy and delicious cheese!  This Tomato and Burrata Caprese is super easy to make, and it’s an excellent appetizer to serve at a party.  (The only challenge is finding burrata cheese.  If you can’t find burrata at your local store, you could easily substitute a ball of fresh mozzarella instead.  You know, the kind that comes packed in liquid.)

So during these cold winter nights, whip up this Tomato and Burrata Caprese as a fun appetizer for friends and family.  (In truth, we turned this into dinner one night…with a glass of red wine and plenty of toasted Italian bread!)  Enjoy! 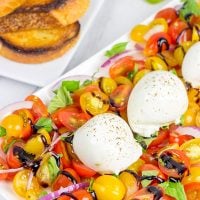