This Toasted Marshmallow Ice Cream is the perfect way to cool off on a warm summer evening! 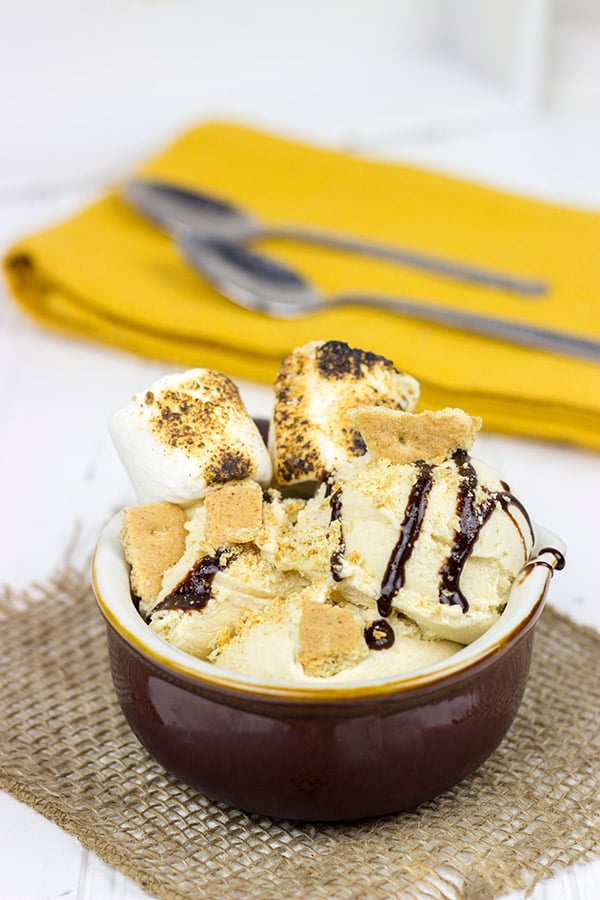 Name one food that reminds you of the summer.  For me, it’s either burgers on the grill or marshmallows roasting over the firepit in the backyard.  Yes, I know I asked for only one food…but picking just one is too hard.  Plus, I made up the game, and I just changed the rules to allow you to pick two foods that remind you of the summer.  (For the Calvin and Hobbes lovers out there, this game bares striking similarities to Calvinball.)  Seriously, though, toasted marshmallows may be one of the easiest and tastiest summer-time desserts ever.  So how do you make toasted marshmallows even better?  Why turn them into an ice cream, of course! 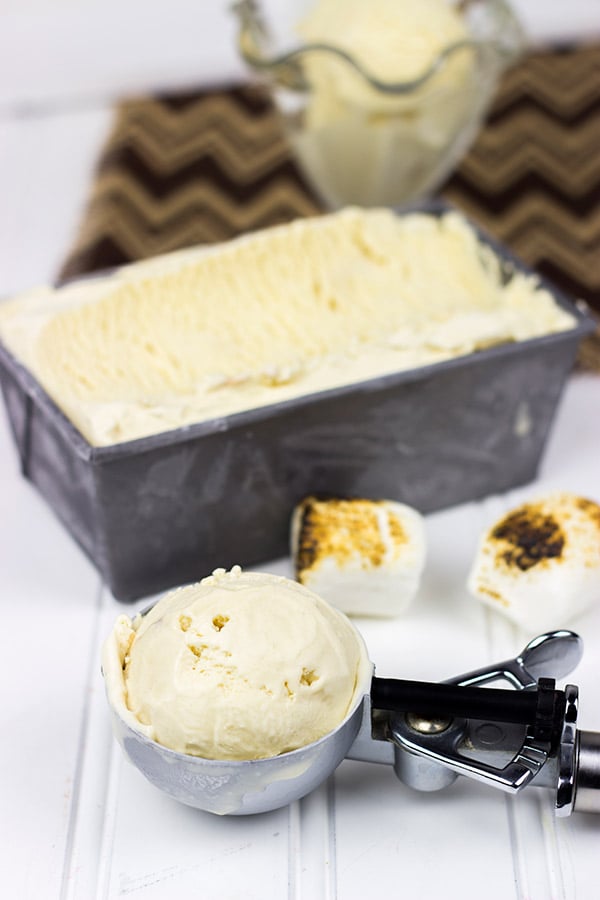 As I’ve mentioned previously, I have a serious love for my ice cream maker.  It’s such a simple machine, but yet it produces some of the tastiest desserts ever!  For years, our ice cream machine sat abandoned and lonely in the back of the cabinet.  I think I used it just one time.  But then I discovered how easy it is to make tasty ice creams…and now that ice cream machine gets a whole lot more love!

I was talking with a Spiced reader a couple of weeks ago, and she told me that she has an ice cream maker, but it hasn’t seen the light of day in years.  Well, what better way to welcome that ice cream maker back to the land of the living than with this Toasted Marshmallow Ice Cream?  (If you don’t own an ice cream maker, go get one.  Seriously.  They aren’t all that expensive, and it’ll be fun to create all sorts of awesome homemade ice creams this summer!) 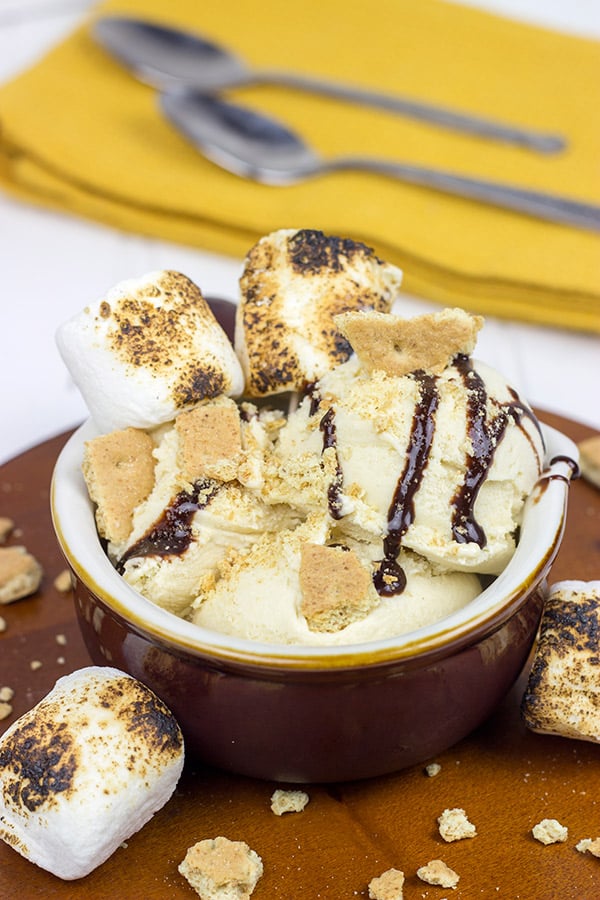 Wondering how to easily get that delicious toasted marshmallow flavor without lighting a campfire in the backyard?  Broil them!  Yup, line a sheet tray with parchment paper and then scatter a layer of marshmallows across the top.  Throw it under the broiler for a few minutes, and walla! you have toasted marshmallows.  But you’ll have to keep a close eye on the ‘mallows while they’re broiling.  They can burn quickly, and Burned Marshmallow Ice Cream just doesn’t have the same ring to it.  (I also rotate my marshmallows every 1-2 minutes so that all sides get nice and toasty.)  Toss those toasted marshmallows in a blender with the custard cream base, and you’ve got the makings of a delicious dessert that is ideal for backyard parties!

Do you read a lot of other foodie blogs?  If so, you may have noticed the Wandering Blog Tour making it’s way across the interwebs.  The concept is simple: you get invited by a friend to join and then in turn invite 3 more friends to jump on the train next week.  Laura from Laura’s Baking Talent asked me to join, and I’m honored to jump on board!

As part of the blog tour, there’s a couple of questions to answer to give you a behind-the-scenes look into Spiced.  So here we go:

(1) What am I working on?  I’ve been writing Spiced full-time for a little over a year now.  (I worked as a Latin teacher and also in college administration in previous lives.)  At first, I wasn’t sure if I could find enough stuff to do to work full-time as a food blogger.  But, I was wrong!  There’s always something new to learn…be it photography, SEO, kitchen skills, etc, etc.  Currently, I’m working on some awesome Red Wine Portobello Burgers…so stay tuned for those next week!

(2) How does my work differ from others of its genre?  Truthfully, there are a lot of awesome food blogs out there.  My goal with Spiced is just to be included in the same conversation with some of them!  As far as inspiration, I draw upon my roots growing up all over the South.  My wife has Italian roots, so I often work a bit of Italian flare into what I do.

(3) Why do I write what I do? Good question.  I often draw upon my daily experiences when I sit down to write posts.  Since the large part of my day involves making, photographing and eating food, I end up with an easy source for stories.  When I read back over my first posts on Spiced, they sound so boring and flat.  I’ve really tried to improve upon that aspect of my blog.

(4) How does my writing process work? Well, I usually sit down and drink my morning cup of coffee while reading through my blog friends’ posts from the previous day.  Then I jump in there and write up another post while my mind is fresh.  By the afternoon, my brain starts to turn to mush, so that’s when I head off to the kitchen to do recipe testing.

Finally, I’d like to invite 3 of my awesome blog friends to join this train!  In fact, all 3 of these are guys.  Yes, you read that correctly.  Unlike the yeti, the tooth fairy and a good can of light beer, dude food bloggers really do exist…and these guys are amazing!  I highly recommend checking them out!

Chris @ Shared Appetite: Chris is one awesome food blogger!  He is based in the NYC area, and he teaches music in his non-blog life.  I am constantly in awe of his recipes, especially these Loaded Baked Potato Totchos.  That’s right: nachos made with tots.  Straight genius I tell you.

Mike @ The Iron You: Mike’s recipes provide a never-ending source of inspiration.  He focuses on healthier foods, and most of his recipes are paleo.  I never realized paleo food could be so delicious!  His Cauliflower Crust Spinach White Pizza has inspired me to give cauliflower a chance when it comes to pizza.  Amazing!  Oh, and Mike is training for a triathlon.  He’s crazy.

Sean @ Snack Fixation: I had the chance to meet Sean at SoFabCon this year, and I really enjoyed chatting with him.  Like the guys above, Sean is also based in NYC.  He posts a mix of original recipes as well as reviews of some of the best snacks and meals around the city.  Beware, Sean’s photos will probably make you very hungry, and you might even drool a little bit.  His recent Three Berry Pie Fruit Salad made me want to lick my computer screen. 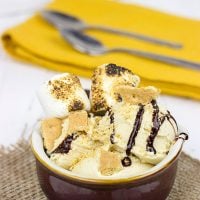