Featuring a ladyfinger crust topped with espresso cheesecake, this Tiramisu Cheesecake is a fun twist on a classic Italian dessert! 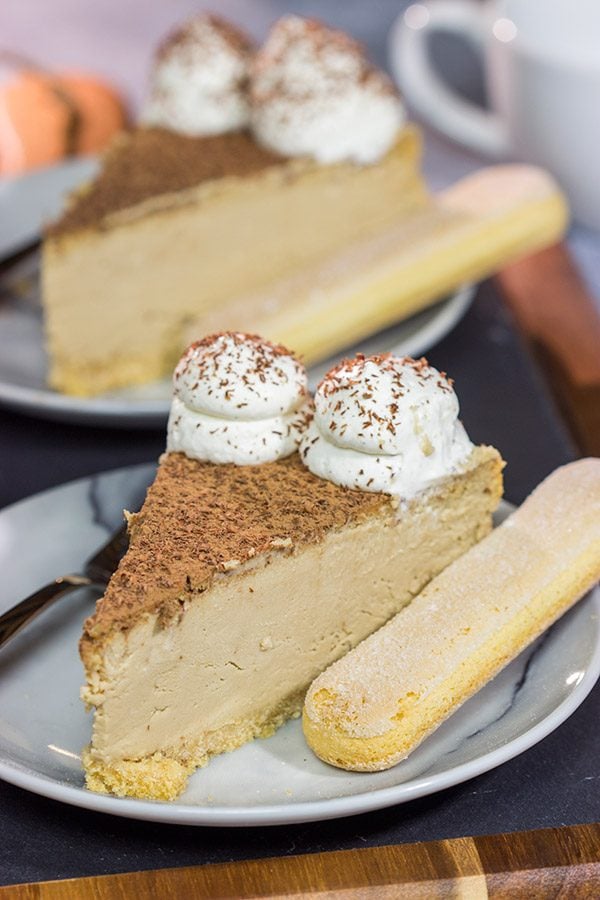 I love cheese.  It doesn’t matter the kind of cheese.  Chances are I’ll love it.  From a good sharp cheddar to a soft triple creme.  If it looks like cheese and smells like cheese, then I’m a happy camper.  (And, yes, some of those cheeses really stink.  Ahem, Camemberts, I’m looking at you.)  But one cheese that’s always intrigued me is mascarpone.

Mascarpone is often described as Italian cream cheese, and that’s a fairly accurate statement.  Both mascarpone and cream cheese are soft, spreadable cheeses.  They’re often found side-by-side in the grocery store, and they have similar flavors.  However, like European butters, mascarpone has a higher fat content than its American cousin.  This leads to a smoother and creamier cheese.  If you’ve ever cooked or baked with mascarpone, then you might’ve noticed that it’s ‘looser’ than cream cheese.  That’s because of the higher fat content.  Remember – fat is flavor! 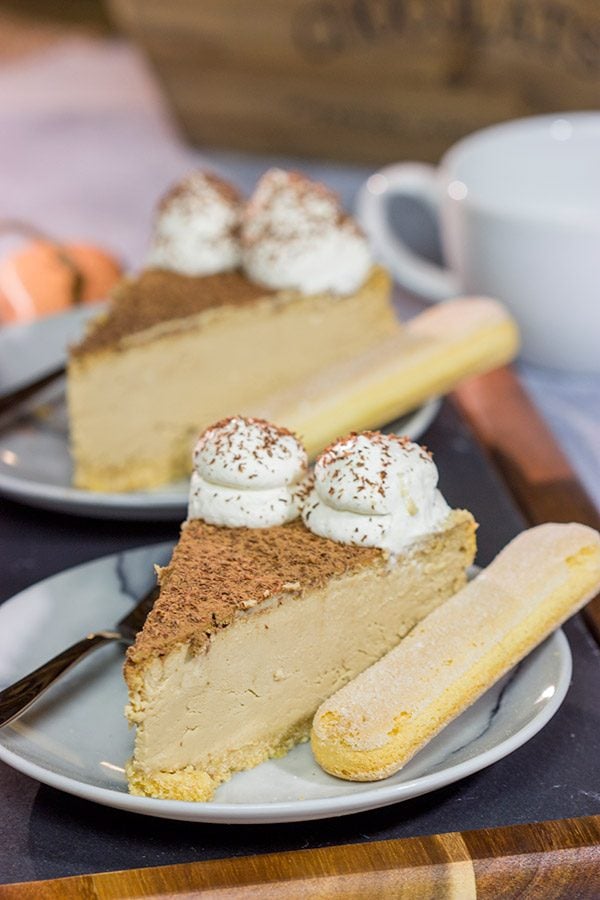 Tiramisu, which just so happens to be one of my favorite desserts of all time, uses mascarpone as a key ingredient.  I got to thinking about tiramisu and mascarpone the other day, and I started wondering what would happen if I took the traditional tiramisu flavors and used them in a cheesecake.  I decided I needed to try this out!  Cheesecake is traditionally made with cream cheese.  Since cream cheese and mascarpone are in the same family, I figured this would be an acceptable substitution.  Let me tell ya – acceptable is an understatement!  This Tiramisu Cheesecake was da bomb!  (Yes, ‘da bomb’ is a scientific term.  See also use ‘da bomb diggity.’) 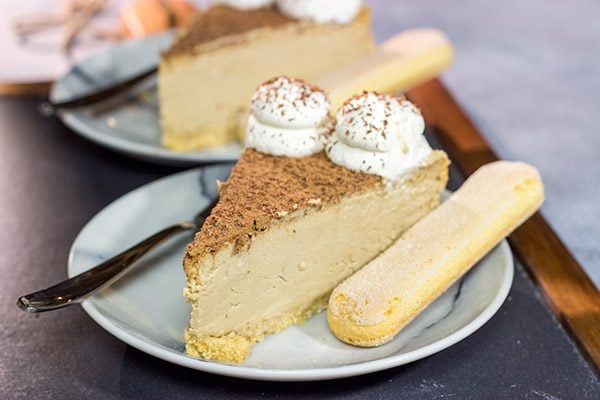 For this Tiramisu Cheesecake, I relied on the traditional ingredients from tiramisu.  Mascarpone, cocoa powder, espresso and ladyfingers.  I did keep mostly cream cheese in the base, but I subbed out one block for mascarpone.  This was primarily because I wasn’t sure what would happen if I used all mascarpone.  (That and mascarpone is also a good bit more expensive than cream cheese.)  The result was two thumbs up for sure!  I used ground ladyfingers as the ‘crust,’ and I mixed a bit of rum in there since rum is often found in tiramisu. 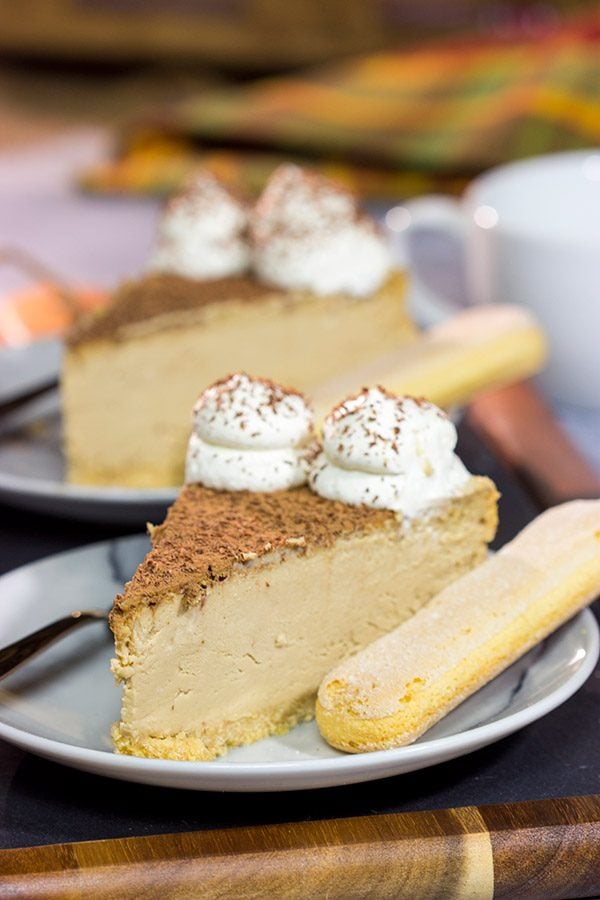 Can you freeze cheesecake?

Absolutely!  I actually freeze my cheesecakes overnight in the pan, and then I remove them the next day.  At that point, they’re similar to a frozen hockey puck, but they come out of the pan nice and easily.  Then I just let the cheesecake thaw in the fridge for a couple of hours.  As far as freezing the cheesecake, Laura and I enjoyed a couple of slices of this Tiramisu Cheesecake, and then I individually wrapped the other slices and put ’em in a freezer bag.  They might not look as pretty once they’ve been frozen, but they’re still delicious.  I hope you enjoy this cheesecake as much as we did! 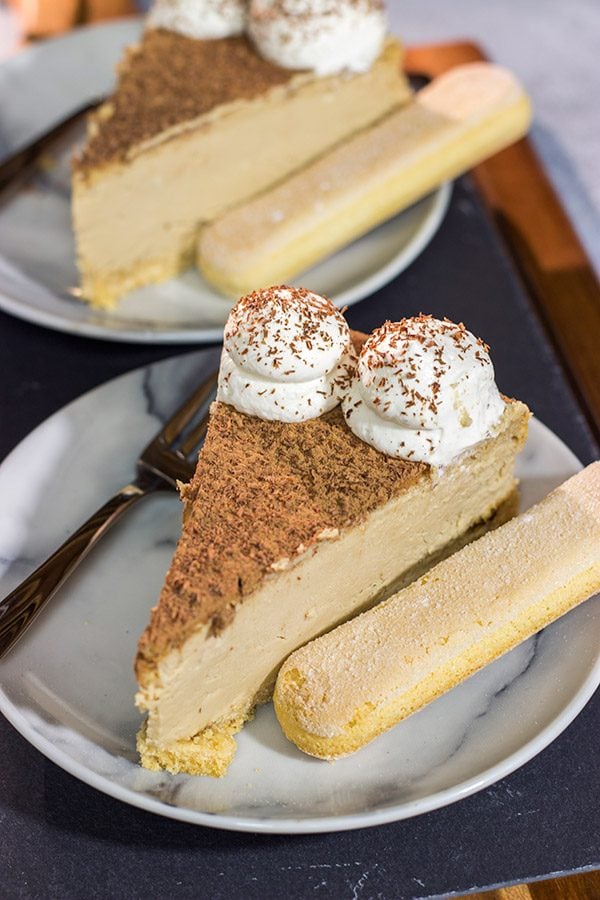 Did you make this Tiramisu Cheesecake at home?  Leave a comment.  Or snap a photo and tag me on Instagram (@Spicedblog).  Happy baking!

Looking for other fun cheesecake recipes?  Check out some of these other favorites, too: 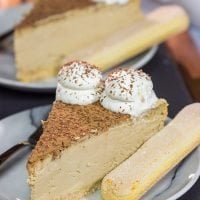 For the Ladyfinger Crust

For the Ladyfinger Crust

Ladyfingers can be found in both soft and crunchy forms. I recommend using crunchy ladyfingers for this cheesecake. (The crunchy version can often be found in the cookie aisle at your local grocery store.)