As the nights turn colder, it’s time to warm up with some tasty comfort food…like these Spinach Artichoke Quesadillas! 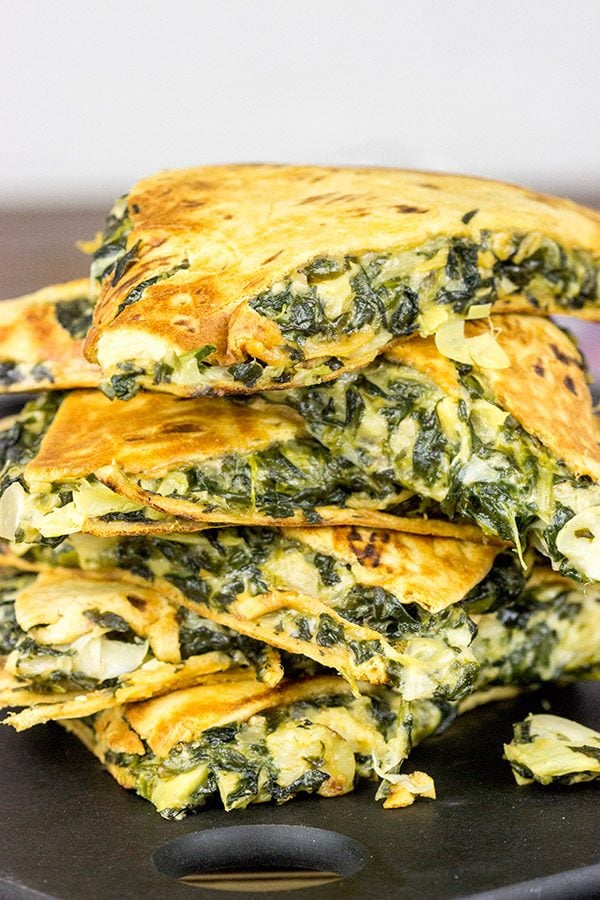 Ah, the dreaded basement.  Basement stairs are the bane of kids everywhere.  Especially basement stairs when the light isn’t working.  Growing up in Charleston, SC, we didn’t have a basement.  (If we had a basement, it would have been flooded 90% of the time.  The elevation of our house was about 6″ above sea level!)  But then when we moved to Raleigh, NC, our new house had a basement.  And, yes, the basement stairs were the kind where you could see through them.  Which also meant that monsters could reach through and grab your feet when you climbed those stairs.

While I never had a personal encounter with a monster in our basement in Raleigh, I’m pretty sure they were still there.  (We did have a raccoon in the basement once…and I’m certain the monsters let it in.  Heck, that raccoon was probably their pet!)  Our house here in upstate New York also has a basement.  However, this basement is finished, and it serves as our rec room, home gym, man cave and my office.  No monsters here! 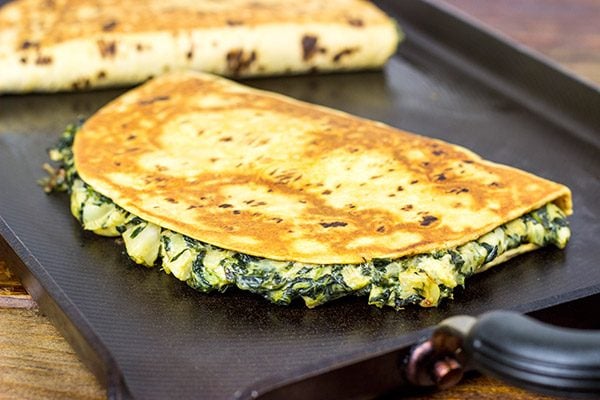 But I started looking around the basement the other day, and I realized it could be a pretty creepy place.

Creepy Basement Point #1: Laura’s childhood doll collection.  Her dolls are in a cardboard banker’s box on a storage rack in our basement.  One of the doll’s hair is kinda falling out of the hole in the box.  If you were just a casual visitor to our basement and looked up and saw hair tumbling out of a box on the top shelf…well, what would you think about that?  Yeah. 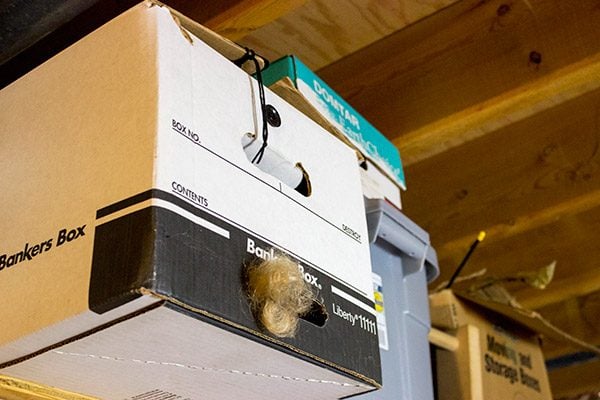 Creepy Basement Point #2: Bloody Mary.  I’ve mentioned Bloody Mary before, but she hangs in the electrical closet which just so happens to be in the corner of our basement.  Laura is terrified of Bloody Mary, so a few years back her friends ‘surprised’ her with this life-sized scary Halloween skeleton.  They told her it was Bloody Mary.  Laura laughed and took it in stride, and we bring Mary out every October as a Halloween decoration.  But Mary is big, and I have nowhere to store her.  So she hangs in the electrical closet.  There was that time when we were having electrical work done and I forget to tell the electrician about Mary.  Oops. 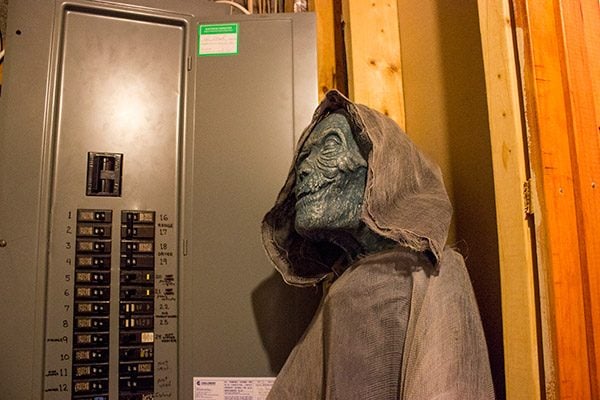 Creepy Basement Point #3: Iggity.  Iggity is the newest addition to our basement.  When my mother and sister (and niece!) came up to visit this summer, my sister was showing me this video of a witch that she got for Halloween.  It’s a full-sized witch.  And she talks.  I guess I made a pretty big deal about this witch because about a week after the Nashville crew left, a witch showed up in a box on our doorstep.  I assembled said witch, and Laura named her Iggity.  But I assembled her in early September, and I didn’t have anywhere to put her until October.  So I put her on the basement landing.  Nothing like rounding the corner of the basement stairs only to meet a full-sized motion-activated witch.

I rest my case.  Our basement is full of things that go bump in the night! 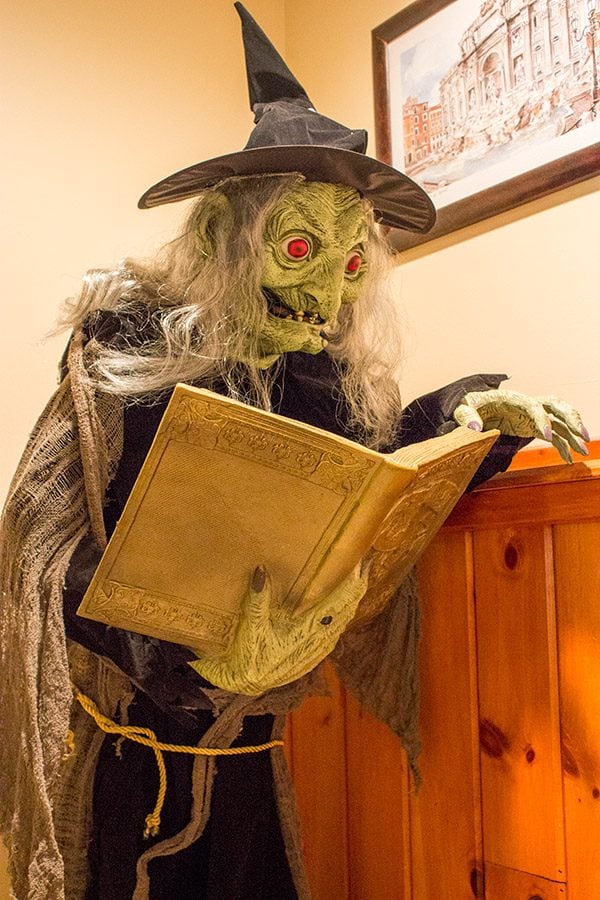 Now that Fall is here and Halloween is just around the corner, it’s time for some delicious comfort food!  One of my favorite comfort meals of all time is a simple quesadilla.  It doesn’t take much.  Just some delicious melty cheese.  Sometimes I’ll add leftover chicken or a can of black beans.  If I happen to have green onions laying around, then I’ll chop some of those up.  A quesadilla is a great vessel for all sorts of leftovers. 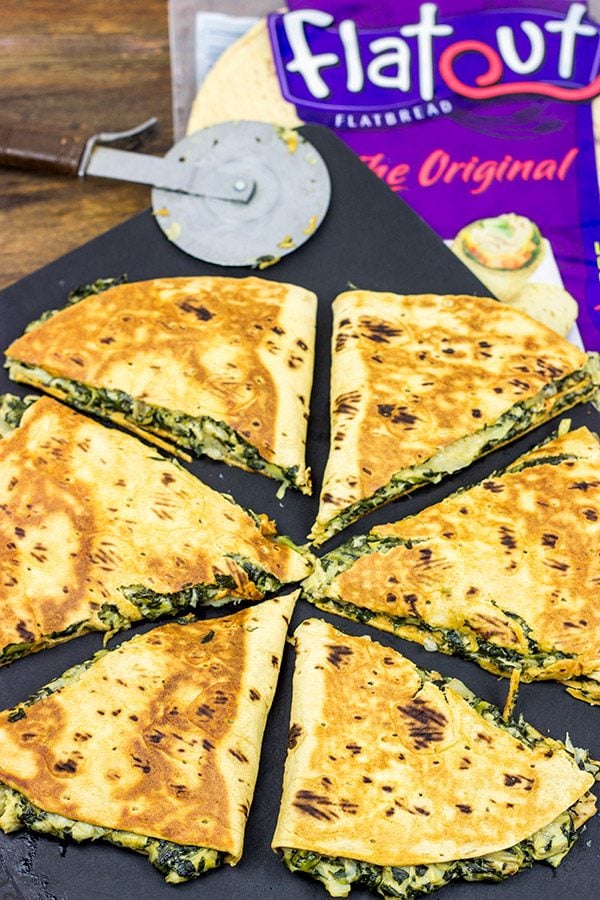 However, I must admit that Laura’s quesadilla makin’ skills are way better than mine.  I could never figure out why her version always tasted so much better.  We used the same ingredients.  But then I watched her make one the other day.  The secret is time.  She lets her quesadilla cook on low for 6-7 minutes per side.  I’m usually too impatient and cook my quesadilla on medium-high for like 2-3 minutes per side.  Turns out those extra few minutes really make a huge difference! 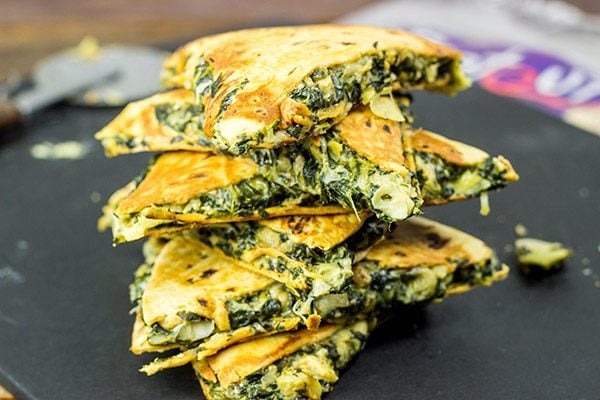 I set out to make us some delicious quesdillas for dinner the other night.  While I love a good basic quesadilla, I took it to a whole new level with these Spinach Artichoke Quesadillas!  I spent the time to saute onions and garlic and then make a spinach-artichoke filling.  (It truthfully didn’t take that much extra work.)  And then I pulled out a pack of Flatout Flatbreads for this one, too.  And I actually followed Laura’s advice of letting that Spinach Artichoke Quesadilla cook on low temperature.  Woah.  Epically delicious quesadilla dead ahead! 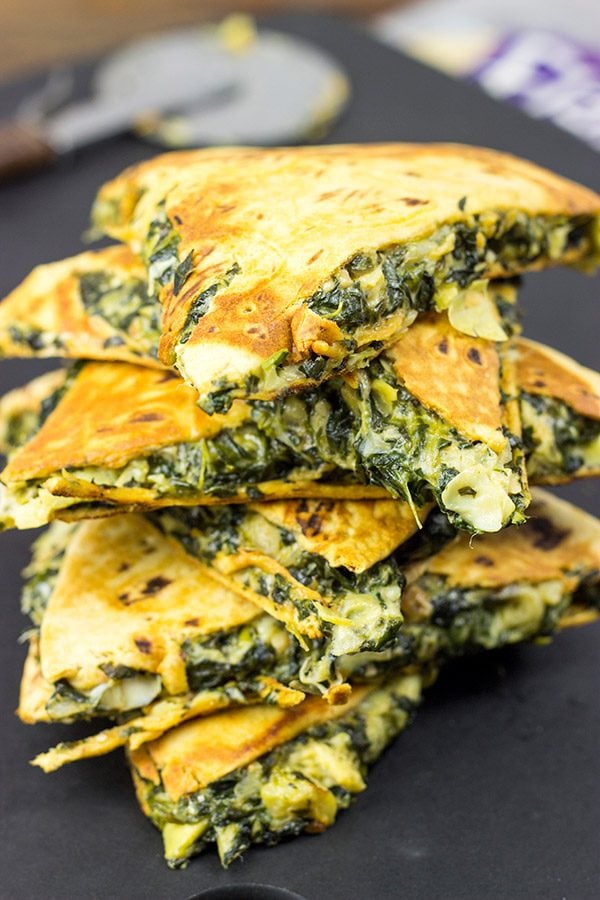 As you guys know, we always keep Flatout flatbreads in our pantry.  Flatbreads make for easy lunches (like these Thai Peanut Wraps), and they can also be turned into edible bowls for Taco Salad.  So it only stands to reason that flatbreads are perfect for quesadillas, too!

Sure enough, these Spinach Artichoke Quesadillas made for one delicious dinner.  I used Flatout’s Original flatbreads for this one, but I want to try these with some of Flatout’s other flatbreads next time.  I’m thinking the Harvest Wheat flatbreads would be quite delicious in quesadilla form! 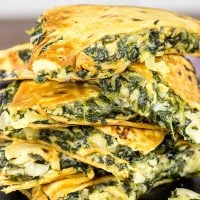 This Spinach Artichoke Quesadillas post was sponsored by Flatout Flatbread, but the recipe and opinions are entirely my own.
Thank you for supporting the brands that support Spiced!