I have fond childhood memories of cobblers. Growing up, my sister and I would visit our grandparents in upstate South Carolina several times a year. They had an old house with a wrap-around porch. I remember sitting on that porch playing while the grown-ups sat around talking every evening.

The fun thing about cobbler is that the recipe is more or less the same regardless of what fruit you use. The only thing that might change is which baking spices you use. For instance, I included cinnamon, ginger and cardamom in this Southern Peach Cobbler. I feel like those spices pair really well with peaches!

In a few months when apple season rolls around, I’ll probably omit the ginger and cardamom in favor of nutmeg and allspice. Other than that? Same exact recipe! That’s one of the beautiful things about cobbler – it’s versatile, easy and delicious!

I can’t say that this Southern Peach Cobbler is the exact version my grandmother made. She often used boxed cake mix as a shortcut, and it was mighty tasty. However, I wanted to make a cobbler from scratch, so I set about creating a topping that yielded a delicious buttery, golden brown crust. As move as I love peaches (and I love them!), the crust on top is the best part of a cobbler!

I did bake this cobbler in a 9″x13″ baking pan. It’s a big cobbler. Once you add a scoop of ice cream, you can get 8 legitimate bowls of cobbler from this recipe. If this is too much cobbler, then cut the recipe in half. This recipe scales beautifully. And for the record, leftover cobbler is mighty tasty – not as tasty as when it’s fresh out of the oven, but close!

You’ll need a bunch of peaches to make this Southern Peach Cobbler. I used ~12-14 peaches. That might sound like a lot, but it’s a big pan. And the peaches do get cooked down a bit before they go into cobbler form. This dessert is packed with peach flavor!

Speaking of peaches, we discovered The Peach Brothers last year, and we highly recommend them. These guys fill refrigerated trucks with peaches from all over the South and then they drive those boxes of peaches up the East Coast. They have a stop right here in my town, so it’s easy for us to swing by at the designated time and pick up boxes of peaches. (If you missed the Peach Brothers’ tour this year, put a note on your calendar for next year. Or just sign up for their mailing list. You’ll be glad you did!)

If you’re looking for one heck of a tasty cobbler recipe, then put this Southern Peach Cobbler on the list. This easy dessert is packed with summer flavor! Happy baking!

Did you bake this Southern Peach Cobbler at home? Leave a comment, or snap a photo and tag me on Instagram (@Spicedblog) – I’d love to see your version! 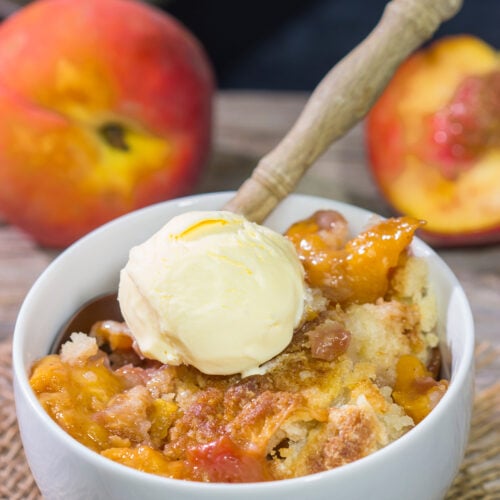 Looking for more peach recipes? Check out these other favorites, too: