This classic Southern Hummingbird Cake is filled with pecans, bananas and pineapples and topped with a tasty cream cheese frosting! 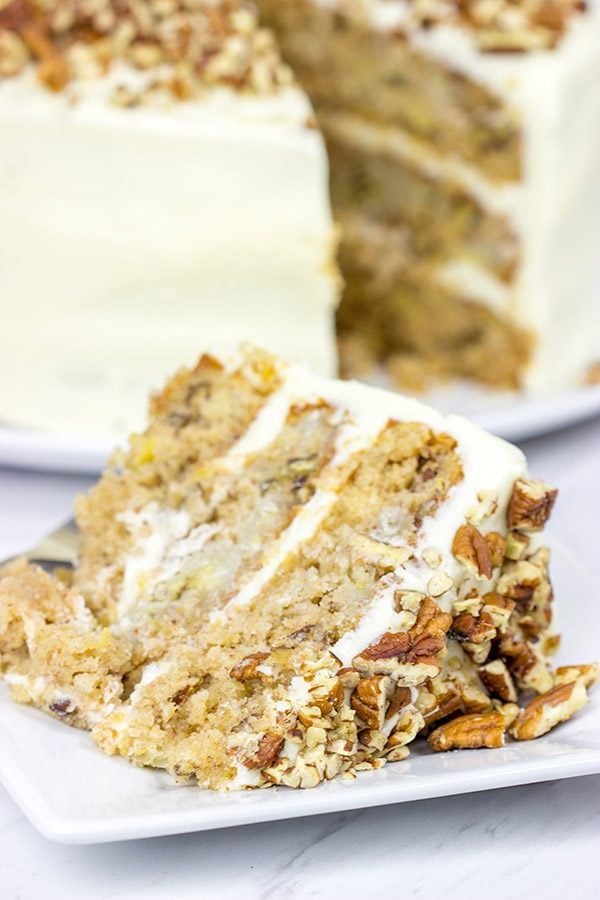 I’ve always considered myself somewhat of an old-fashioned kinda guy.  I like rituals and traditions.  I believe in chivalry and all that jazz.  (Or maybe I just like the thought of being able to dress up in a suit of armor and run around with a sword…)  Granted, this doesn’t show up much on a day-to-day basis.  However, one of my favorite things is following the traditional gift-giving guide for anniversaries.

Do you guys know about the traditional anniversary gift list?  The 1st anniversary gift should involve paper, the 2nd cotton, the 3rd leather…and so on.  On a side note, I’d like to point out how many of the gifts involve diamonds once you get into the 60+ anniversaries.  But then again, if you make it 60+ years, you deserve a diamond or two!  And then there’s the 90th anniversary gift: granite.  Has anyone ever reached a 90th anniversary?  Quite impressive! 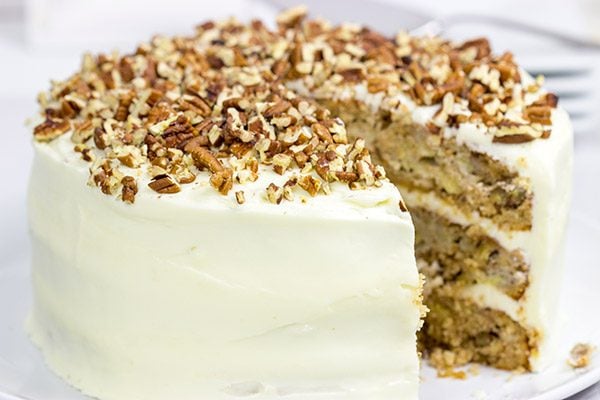 Laura and I have been married for 5 years now, and I’ve had a lot of fun finding gifts for each anniversary.  It’s a way to be creative with a theme.  The 1st year (paper) involved a custom notepad for her desk as she had just started her new job.  I got her a nice, plush bathrobe for the 2nd anniversary (cotton)…although she still prefers to wear her threadbare robe that she’s had for at least 15 years.  Oh well.  The thought was there! 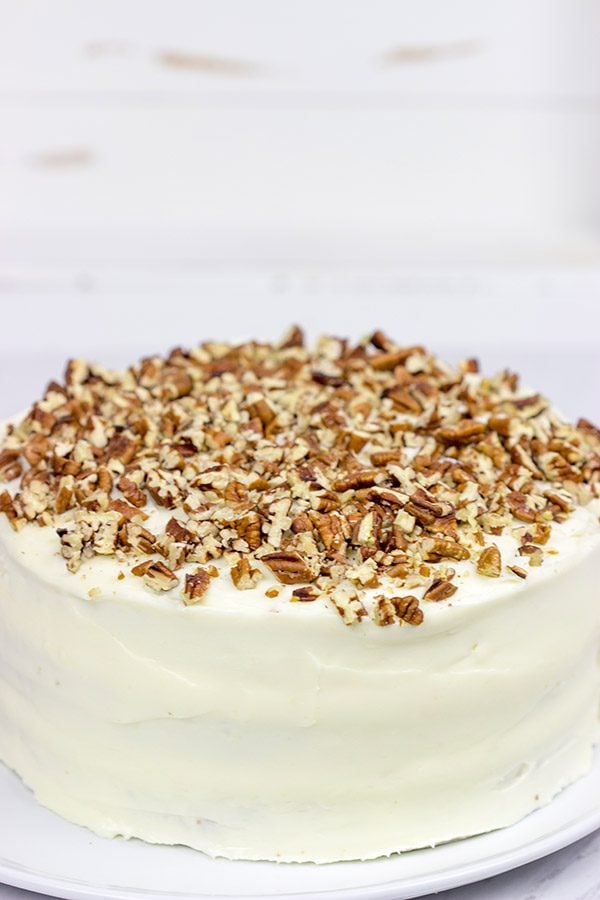 When our 5th anniversary (wood) rolled around last Fall, I set out to find something fun and unique.  I found a lot of ideas involving jewelry boxes, but she already had one of those.  And I didn’t want to just get something that would sit on a shelf and create more clutter.  After a lot of googling, I landed on the idea of a birdhouse.  We enjoy watching the finches and wrens come to the feeder on our porch, so a birdhouse seemed like a fun idea.  She loved the idea!  We didn’t manage to get the birdhouses out into the yard until early this summer, but they’re there.  We’ve seen a few birds scouting them out, but so far no one (no bird?) has made a nest…yet.  Hopefully that’ll come soon!

Speaking of birds, we’ve been lucky enough to spot a couple of hummingbirds during the summer months.  We have some phlox planted right next to our back porch, and the hummingbirds love it when it blooms in late summer.  We do have a hummingbird feeder out, too, but they haven’t seemed to like that one.  I did spot one checking out the feeder one time, but he never came back.  I might try a new feeder next summer. 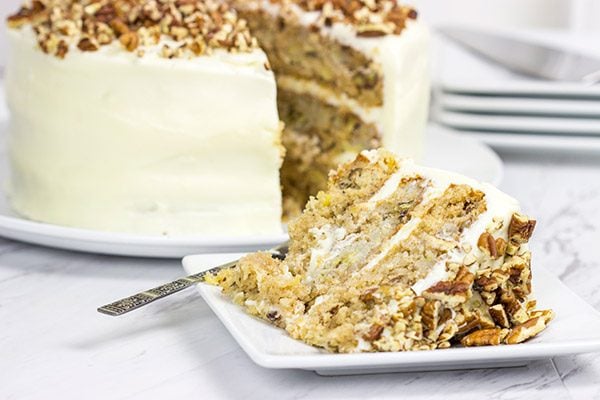 Ah, but let’s switch gears slightly over to this Southern Hummingbird Cake.  It doesn’t actually involve hummingbirds, but it sure sounds like a cool name, right?  The name comes from the fact that the cake was invented in Jamaica, and the hummingbird is the national bird of Jamaica.  Hummingbird Cakes are extremely popular in the South, and they make frequent appearances at neighborhood parties and family gatherings. 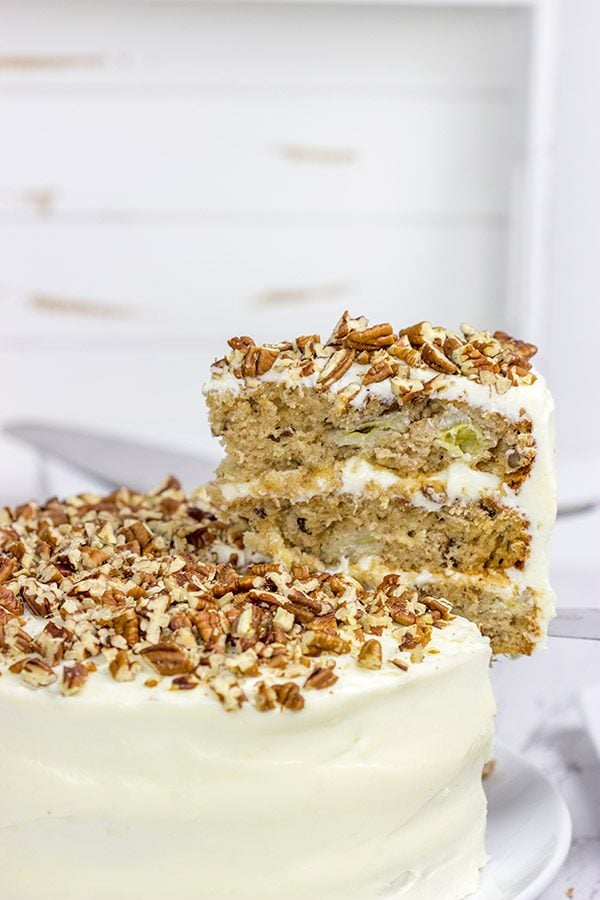 This classic Southern Hummingbird Cake is similar to banana bread, but it also incorporates crushed pineapple and pecans.  The result is an extremely moist and flavorful cake that is then covered in cream cheese frosting.  Can’t go wrong there!  This cake actually reminds me a bit of my go-to banana bread recipe…just in cake form.  With cream cheese frosting.  Delicious!

The next anniversary gift is iron.  Umph.  I’d love any ideas you might have!  Perhaps an iron sword?  (Or maybe that’s just what I want…) 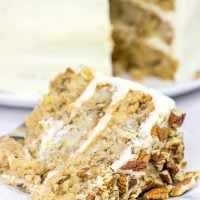