Who wants cake?  This moist and tasty Banana Rum Cake features a bit of rum and plenty of ripe bananas…Cheers! 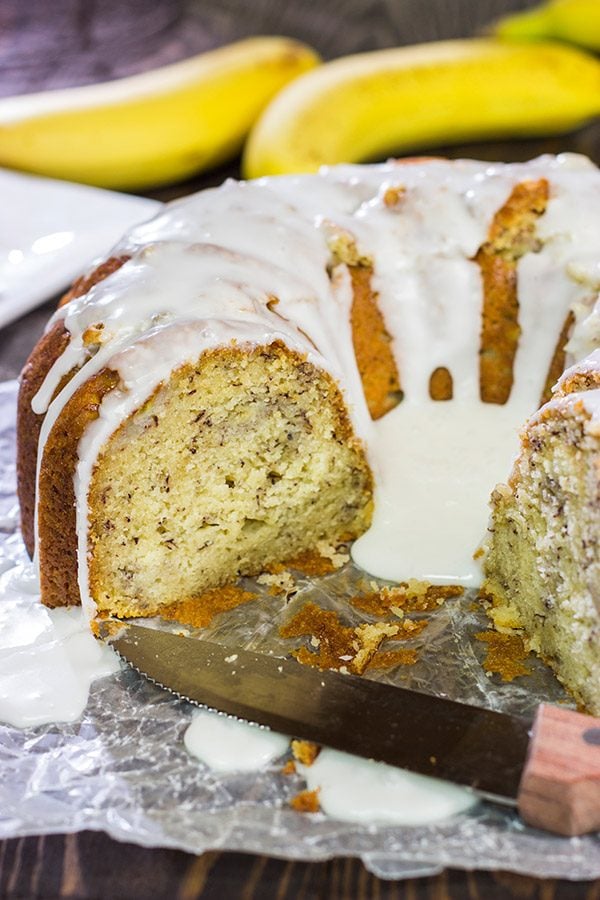 I’m a whiskey guy.  No matter whether it’s American-made bourbon or Scottish-made scotch, I’ll almost always opt for a glass of whiskey if we’re sipping on cocktails.  I’d be a little ashamed to admit how many different whiskeys we have in our liquor cabinet.  We don’t drink all the time by any means.  Instead, we just like trying different bourbons and scotches.  It’s especially fun to pour little sips of several types and try them side-by-side.  You really begin to appreciate the different layers of flavor in each one.

One of our good friends, however, is a rum girl.  I always associate rum with the cheap rum-and-cokes I’d drink in college.  I’m over those!  Our friend has opened my eyes to all sorts of different rums, though, and I’ve gotta say that it’s fun trying the different styles and kinds.  At the end of the day, I’m still a whiskey guy, but at least now I can appreciate a good rum. 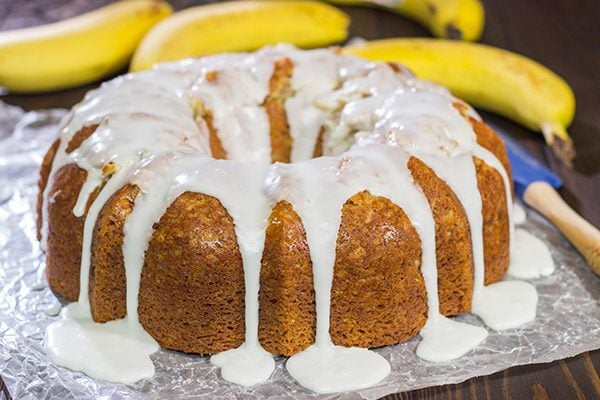 We were sitting around one night recently, and we got to talking about baking with rum.  Rum is a key player in all sorts of cocktails (like this New Orleans Hurricane), but it’s also great to use for marinating or baking.  Last summer, we marinated some pineapple slices in rum and then tossed ’em on the grill alongside our steaks.  Holy cow…talk about delicious!  However, I digress.  Today’s post is about baking with rum. 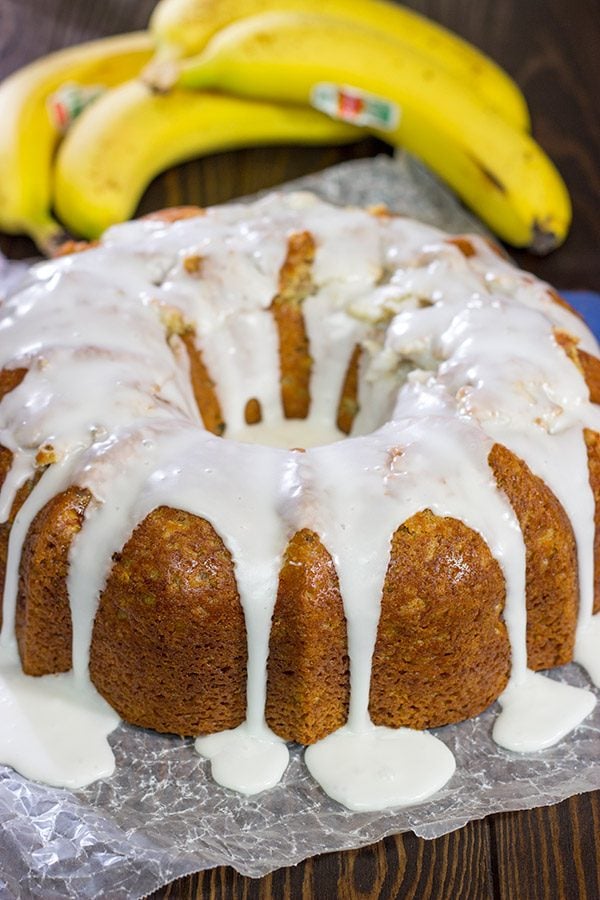 I made this Toasted Coconut Rum Cake several years ago, and I still get comments from my friends at the curling club about that one.  As we were talking about flavors that pair well with rum, someone suggested bananas.  Bananas Foster has always been one of my favorite desserts, so I got to thinking about whether I could turn Bananas Foster into a cake.

Bananas Foster involves pouring rum into a skillet and then igniting it.  The thought of igniting a cake didn’t seem like such a good idea, so I backtracked a bit.  Instead, I started with my mom’s famous recipe for banana bread and transformed that into a bundt cake.  Rum was used in place of the liquid in the recipe, and I’ve gotta say that this Banana Rum Cake turned out to be rather tasty! 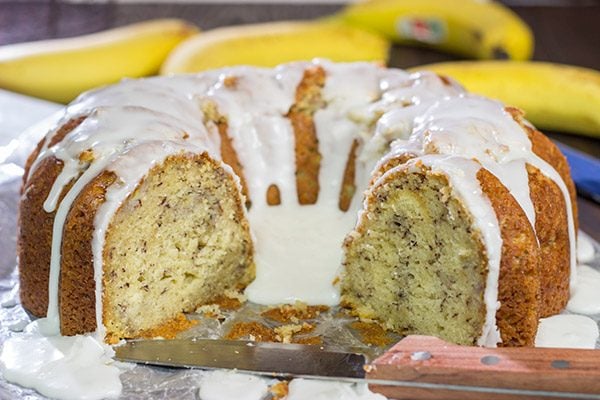 This Banana Rum Cake doesn’t have an overt rum flavor.  Instead, you’ll notice an extra layer of flavor in the cake, but you’d be hard-pressed to recognize it as rum if someone didn’t tell you.  (That Toasted Coconut Rum Cake is a bit different as the cake gets soaked in a rum syrup overnight.  It’s delicious, but it does have a strong rum flavor.)  If you’re looking to highlight the rum flavor in this cake, just use rum instead of milk for the glaze on top.  Also, I recommend using a dark rum as I’m not sure a light rum would bring the same depth of flavor. 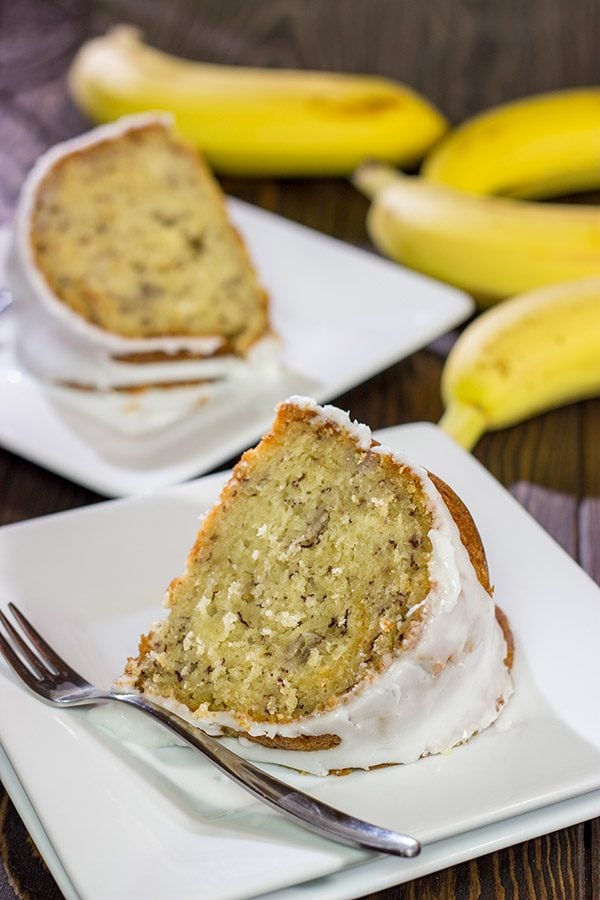 If you’re not feeling the rum here, I would recommend replacing it with a citrus juice.  Apple or orange juice would both be totally acceptable, and the flavors would pair well with the bananas.  Whether you use rum or juice, this Banana Rum Cake is certain to be a crowd-pleaser!  It didn’t last long here in our house.  Cheers, friends!

Did you bake this Banana Rum Cake at home?  Leave a comment.  Or snap a photo and tag me on Instagram (@Spicedblog)! 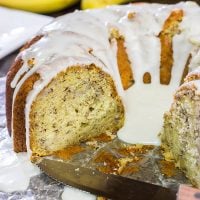