This Pumpkin Spice Rugelach includes real pumpkin in addition to your favorite Fall spices…it’s the perfect sweet treat on a chilly day! 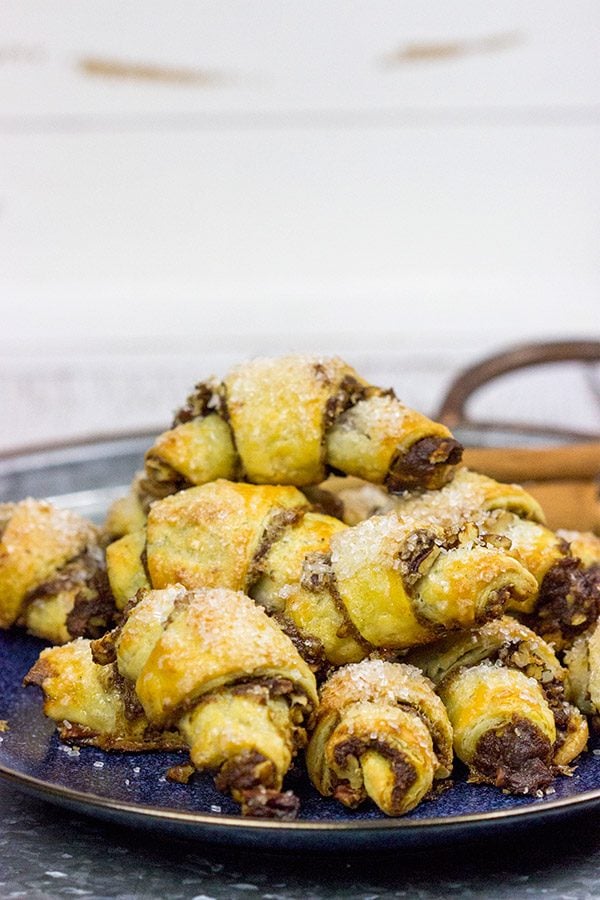 “I did it, Daddy!  I dug in the garden!”  If you’ve been reading Spiced for a while, then you know that planting a garden is one of our favorite things to do every summer.  We always plant the standards (bell peppers, couple types of tomatoes, zucchini and jalapenos), and then we take a corner of the garden to try something different.  We stubbornly stuck with strawberries for a couple of years, but finally admitted defeat to the chipmunks.  Since then we’ve tried Brussels, okra, beans, carrots…you name it, we’ve probably tried it. 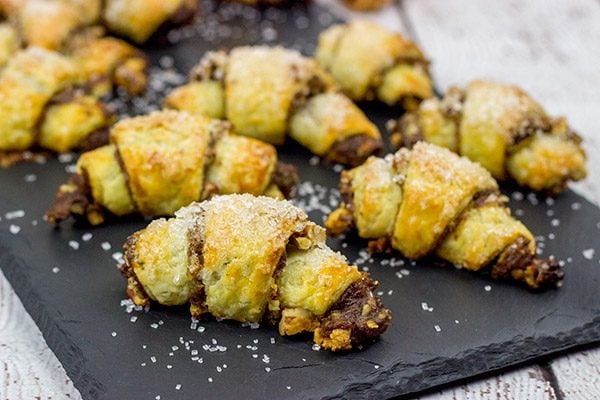 This year, we mixed it up a little bit and let Robbie take over that ‘experimental’ corner of our garden.  We helped him pick out some plants at the nursery, and then we taught him how to dig in the garden and plant his crops.  I’m pretty sure more dirt ended up outside of the beds than in, but that’s ok.  He had a blast planting his garden!  We even grabbed an 8-ft sunflower so he could watch it grow.  Too bad the rabbits ate the sunflower on the first night.  Don’t be surprised if you see a rabbit stew recipe coming up soon!  Haha.  I’m kidding…sorta.

Robbie also chose to grow some mini-ornamental pumpkins in his garden this year.  And they worked!  Vining crops like pumpkins, watermelons and cantaloupes can be a bit of a pain since they spread out all over the place, but I diligently kept the vines trained along the fence-line.  Robbie has loved watching the pumpkins grow, and it’s become somewhat of an after-preschool ritual to march (yes, march) to the garden to check out the status of the pumpkins.  I think the little guy has a green thumb as we’ve got several mini-pumpkins ready to come inside to decorate the table for the season. 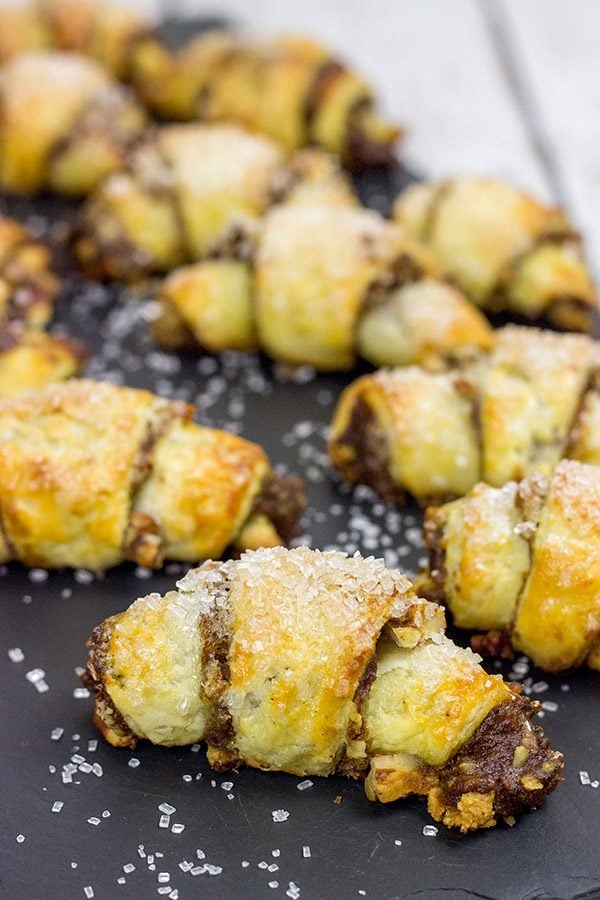 Speaking of the season, one of my favorite parts about Fall is pumpkin spice.  And, no, I’m not referring to the ubiquitous pumpkin spice latte.  I might have 1 or 2 of those, and I’m all set for the year.  I’m referring to using pumpkin spice flavors in other recipes…namely desserts.  These Pumpkin Spice Rugelach are a recent creation, and they turned out very well!  These Pumpkin Spice Rugelach are the perfect 2-bite size, and I couldn’t keep myself from stopping by the kitchen counter to grab another one whenever I walked by. 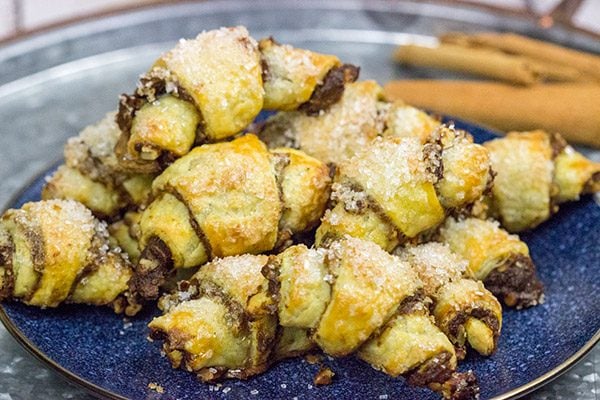 Have you ever made rugelach?  Rugelach are Isreali in origin, and they remind me a lot of pie dough both in how they’re made as well as taste.  But the unique thing about rugelach is the addition of cream cheese to the dough.  The interwebs tells me that cream cheese is a relatively new addition to rugelach.  I’ve gotta say that I like the cream cheese addition.  The dough is quite tender, and it’s perfect for all sorts of fillings.  Since we’re in Pumpkin Spice Everything season right now, I decided to create Pumpkin Spice Rugelach.  I even went all in and included pumpkin in these rugelach.  If it’s gonna say pumpkin spice, it should at least include pumpkin, right?! 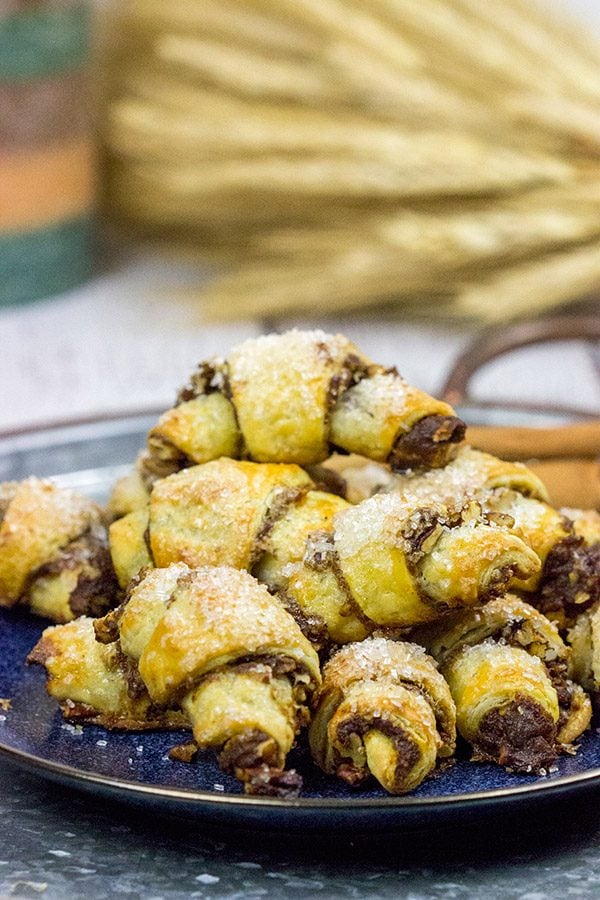 Robbie’s garden pumpkins are way too small to cook with, so I just used canned pumpkin (not pumpkin pie filling…just pumpkin).  Mix in some seasonings and an egg, and you’re all set!  These Pumpkin Spice Rugelach are fun to make as you roll the dough into a circle and slice it into triangles first.  Those triangles get rolled up (like a croissant) before going into the oven.  Sure, this is a bit more labor intensive than say a rolled cookie dough, but it’s honestly not that bad.  And the result is worth it!  Trust me.  I think I polished off an entire batch of rugelach in record time.  Robbie might have helped a little bit, too.  I hope you enjoy these Pumpkin Spice Rugelach as much as we did!  Enjoy Fall baking season, friends! 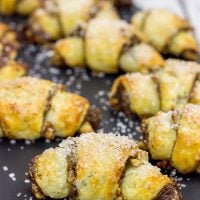