The crisp Autumn air is back!  Celebrate the start of baking season with a batch of these tasty Frosted Maple Sugar Cookies! 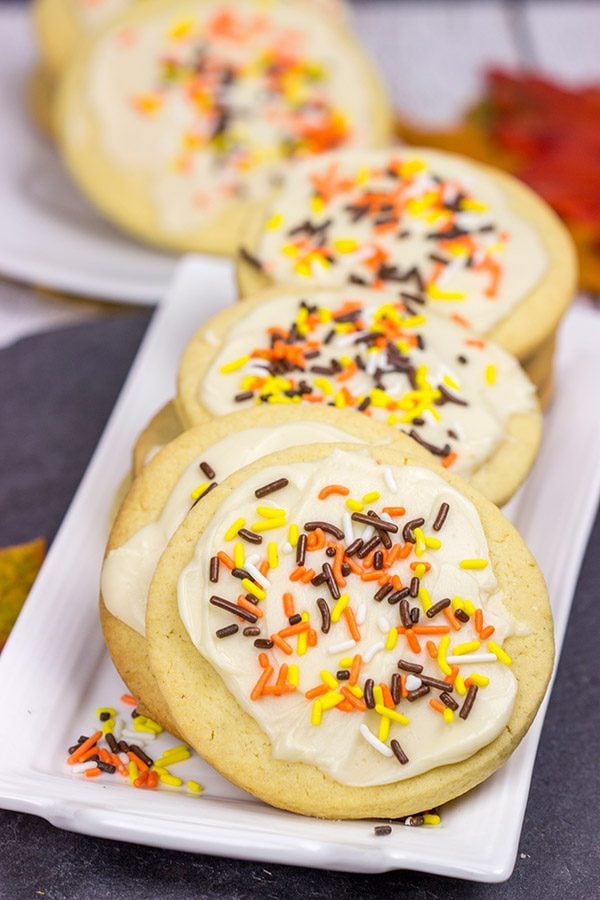 Enjoying the crisp chill in the air.  Pulling a sweater off the top shelf of the closet.  Watching football games on the weekends.  Ah, Fall is back!  Even though it feels like winter lasted forever (and ever…and ever…) last year, Fall is here again.  I’m actually ok with that, though.  We had a great summer here with Robbie, and Fall is my favorite time of the year.  All of the reds, yellows and oranges of the leaves really puts me in a good mood.  Ok, the return of baking season might contribute to that good mood, too.  (Oh, who am I kidding?  Baking season never stops in this house!) 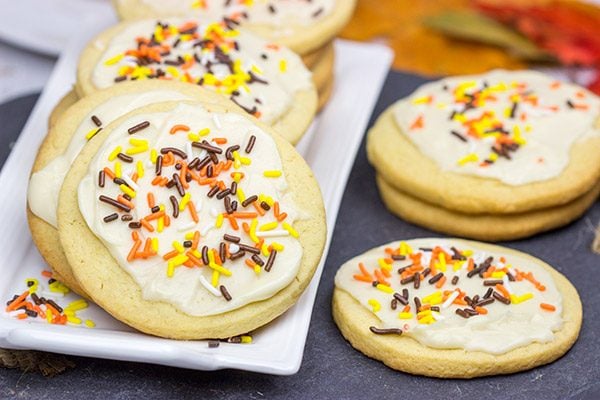 Maple is one of those iconic Fall flavors, but did you know that maple syrup is actually made in the Spring?  Yup, maple syrup and the Fall are completely unrelated.  Well, to be fair, I bet maple syrup sales are high in the Fall, but maple farms aren’t actually in operation right now.  Sugaring season for maple syrup actually happens in the late winter/early spring when the days are warm, but the nights are cold.  The warmer temperatures encourage the trees to start making sap…and that sap is what eventually turns into the delicious stuff we put on pancakes.  Maple syrup really is nature’s candy! 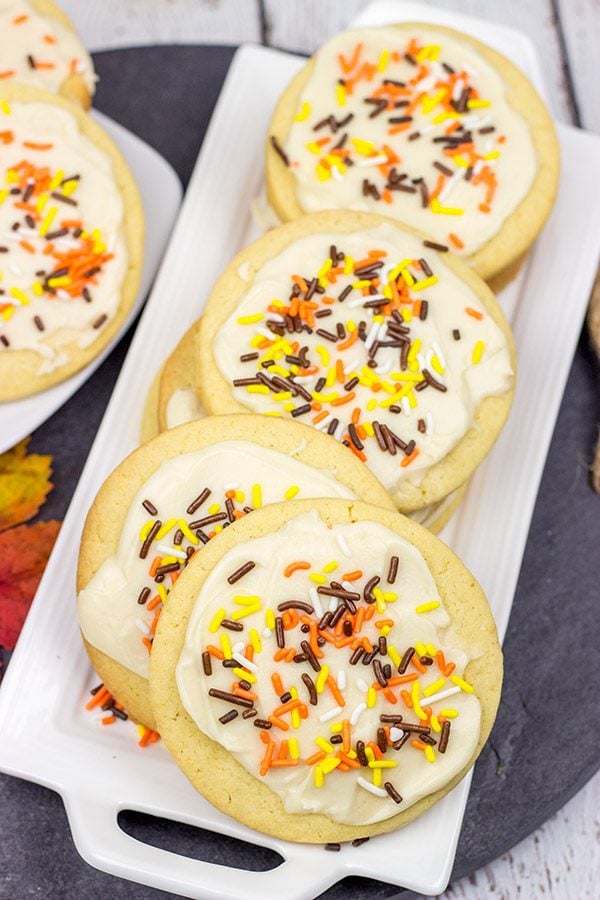 Sugarmakers literally put a single tap into each maple tree, and those taps slowly collect sap.  Sometimes the sap drips into buckets which are collected by the sugarmaker.  Sometimes those taps are connected to plastic lines which drain back into a sugarhouse.  Either way, the sap is collected and gets boiled down to eliminate most of the water.  It takes 40 gallons of sap to create 1 gallon of real maple syrup.  40 gallons!

We often go over to Vermont or western Massachusetts on maple weekend during sugaring season to pick up a gallon of fresh syrup.  During this short 4-6 week period, sugarhouses are operating nearly around the clock to produce enough syrup for the whole year.  And as a side note, these sugarhouses release clouds of maple steam into the air as part of the evaporation process.  You can smell the sugarhouse long before you see it! 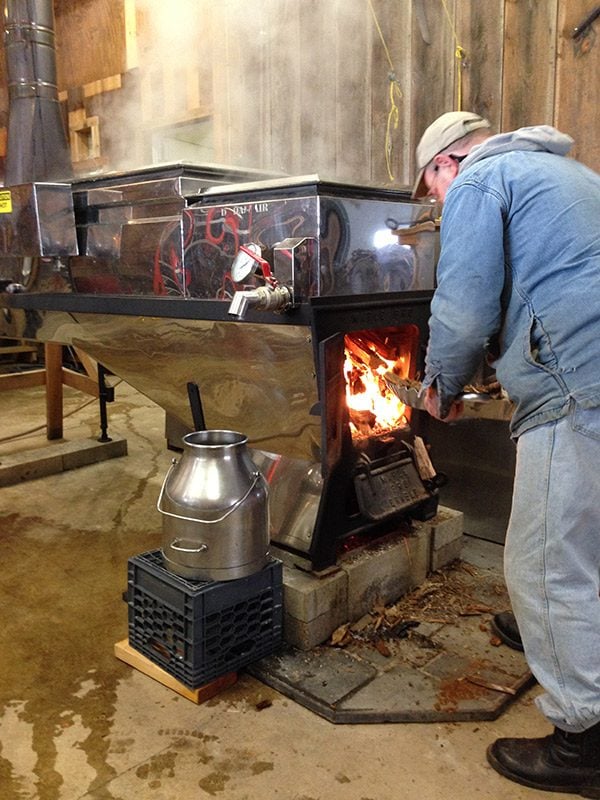 So even though maple syrup is made in the Spring, I still associate it with Fall flavors.  Cinnamon, brown sugar, maple syrup.  They all go together so well!  Take these Frosted Maple Sugar Cookies, for example.  There’s syrup (the real deal…not the fake stuff in those plastic squeeze bottles) in both the cookie as well as the frosting.  And the result?  Quite possibly cookie nirvana! 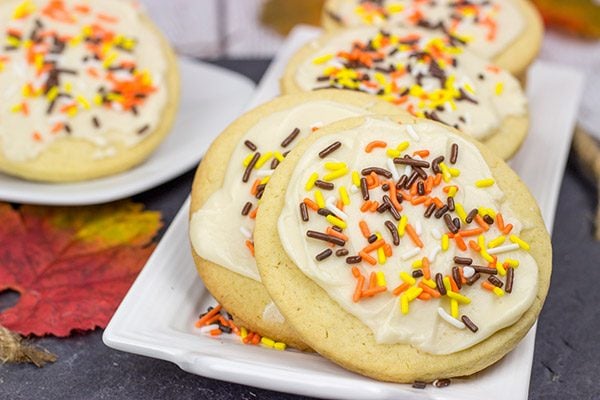 These Frosted Maple Sugar Cookies have a noticeable maple flavor, but it’s not as strong as eating pancakes or waffles coated in syrup.  I love to bake (obviously), and I must admit that these Frosted Maple Sugar Cookies raced right up to the top of my favorite cookies list.  In fact, this cookie recipe will now be my go-to whenever I need sugar cookies…which happens at least once a week around here!

Oh, and since we’re talking about maple syrup, I have throw a shout out to Runamok Maple.  We stumbled across their syrup last Fall on a trip to Vermont, and we ended up getting bottles for everyone on our Christmas list.  Those gifts were met with rave reviews…especially from my Dad in Texas.  In fact, we plan on sending maple syrup out to our family again for the holidays this year.  Bourbon barrel-aged maple syrup, anyone? 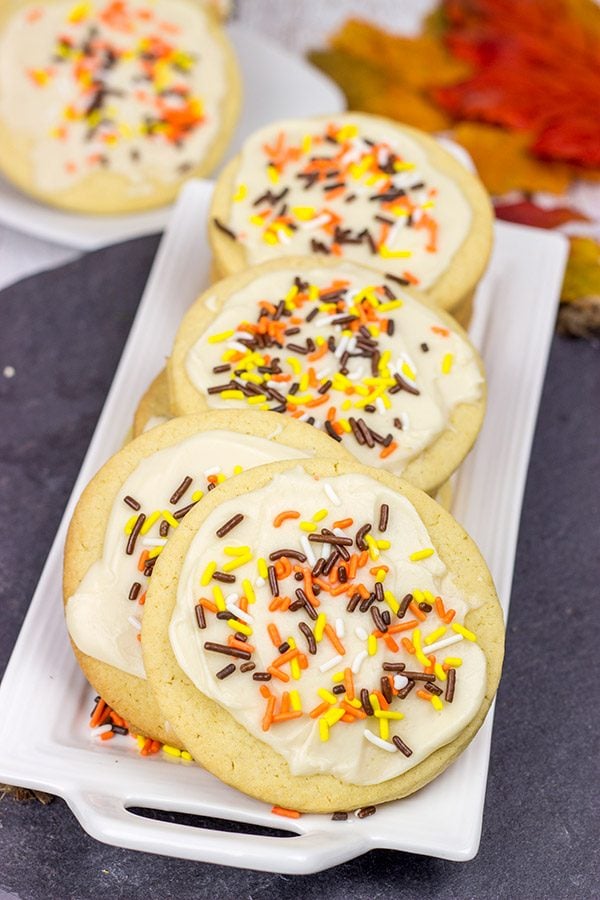 So grab a cup of coffee or tea and curl up on the couch with a Frosted Maple Sugar Cookie…or two.  Enjoy! 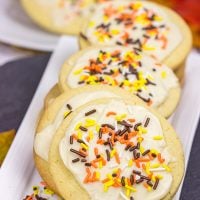