Mix up pizza night and make up a batch of these Pepperoni Pizza Rolls (Chrusties). They’re quite tasty when served with ranch dressing!

Several months ago, my wife and I took a trip down to Texas to visit family.  It was great to get out of town for a bit and reconnect with family that we aren’t able to see very often.  (East Texas is a long haul from upstate New York.)  Aside from seeing family, one of the highlights of the trip was the chance to reconnect with two of my best friends from my days living in Baton Rouge, LA.

I remember the day like it was yesterday.  A new neighbor had recently moved into the apartment just across from my patio.  I was heading out to walk my dog one evening, and it just so happened that he was out grabbing some fresh air, too.

Over the course of the conversation, we realized we had a lot in common…and sure enough, we became great friends.  Dale and his wife, Missy, got married a couple weeks later, and I fish-sat for them while they were gone.  You know you’re good friends when you fish-sit (is that a thing?) for each other.

As it turns out, my new neighbor was quite the master with the grill (despite the picture above where a rogue burger somehow jumped off the grill).  Over the course of the next year, I learned all sorts of awesome grilling tips and tricks.  He taught me how to make delicious burgers and beer-can chicken, and I gladly soaked it all in.  (I didn’t know it back then, but I was destined to become a food blogger!  I’ve always loved food, and I’ve always loved learning new skills in the kitchen.)  We had more backyard (uh, back patio) grilling parties than I can remember.  Memorial Day, Labor Day, July 4th, heck even Mardi Gras…every holiday was a legitimate excuse to pull out the grill and invite friends over!

As it often happens, life intervened.  They moved out to the California wine country, and I later moved off to Atlanta.  My wife knew all about Dale and Missy even though she had never met them.  We talked about taking a trip out to California to visit, but the trip just never happened.  Fast forward 5 more years, and I find out that Dale and Missy have moved back to Texas to be closer to family.  And it just so happens that our families live pretty close to one another.  So when my wife and I set off on our tour across East Texas, a visit with Dale and Missy was an absolute requirement!

We caught up over some beers and pizza in a tiny sports bar in a town I’d never heard of.  The topic of conversation turned to food blogging, and I attempted to describe what I do on a daily basis.  I mean, most people are familiar with blogs…but it’s still difficult to describe all of the different aspects that go into posting new recipes several times a week.  Somewhere in that conversation, Dale told me a story about Chancey’s Chrusties.

I’d never heard of Chancey’s, but apparently it was a restaurant in Radford, VA that closed its doors several years back.  Dale traveled for work when he first graduated college, and he’d come across Chancey’s on a visit to Radford.  Chrusties were Chancey’s signature item, and students would literally take turns leaving parties early on the weekend to get multiple orders of Chrusties for all of their friends.  Chrusties are absolutely legendary around Radford.

Since Dale knew that I liked to experiment in the kitchen, he suggested that I recreate Chancey’s Chrusties.  Given that I’ve never actually eaten a Chrustie from Chancey’s (and never will since they closed up shop several years ago), I had to rely on descriptions from Dale as well as comments on a Facebook group.  Yes, there is an entire Facebook group devoted to Chancey’s Chrusties!

Once back home, I decided to take a stab at the Chrustie.  From what I’ve been able to determine, the Chrustie is essentially a pizza roll.  But it’s not a traditional pizza in that the recipe doesn’t call for marinara sauce.  Nope, you dip Chrusties in ranch dressing.  I was a little wary of how this recipe would turn out, but I quickly figured out why students would stop partying to get Chrusties before the shop closed up for the night.

These things were delicious!  I called them Pepperoni Pizza Rolls, and my wife and I shared a batch one night for dinner while we watched a movie.  We love making pizza around our house (and I’ve shared quite a few of our pizza creations here), and these Chrusties ranked up there near the top of the list!

I’ve sent the recipe off to Dale, and I’ll have to get his opinion on how this version matches up against the original Chrustie.  Similar or not, I do know that these Pepperoni Pizza Rolls make for one tasty snack!  (Ok, maybe we turned these into a meal…after all, Friday night is pizza night around our house.)  Even though it’s not grilling, it also felt awesome to finally repay Dale for imparting all of his grilling knowledge on me years ago.

Is it Friday night yet?  I want some more Chrusties!  Did you ever visit Chancey’s in Radford, VA?  What was your favorite late-night food in college? 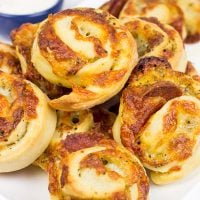