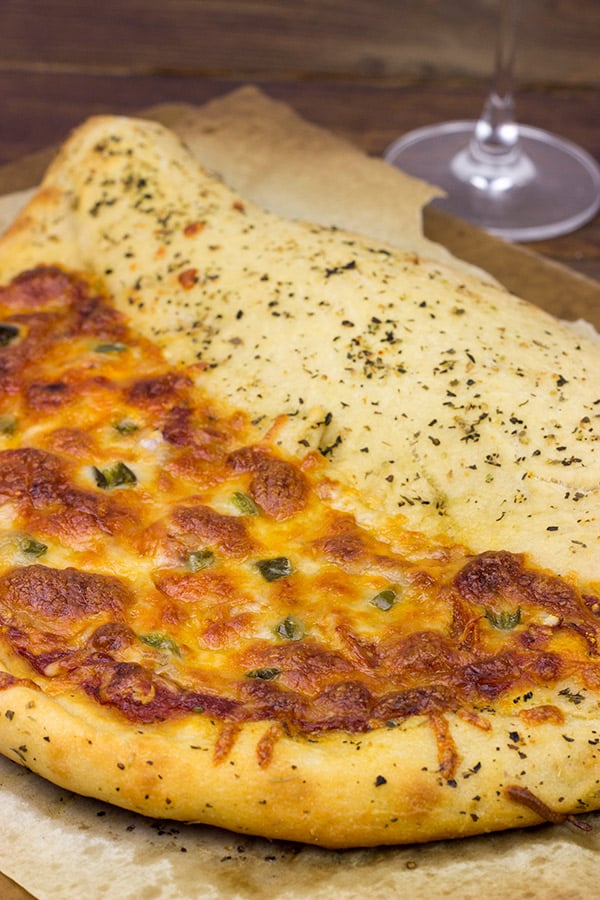 As you probably know by now, we love a good cheeseburger around the Spiced house.  (These Ciabatta Bacon Cheeseburgers are one of our latest addictions!)  But homemade pizza ranks pretty high up there on our list, too.  It should come as no surprise that my wife and I went to Italy on our honeymoon several years ago.  After all, my wife comes from a big Italian family, and I love everything about Italy.  We got married in late October, and we actually found out that same week that we would be moving from Atlanta to upstate New York…in about 2 months time.  Needless to say, we decided to take a delayed honeymoon the following spring.  (And after spending our first winter digging our cars out of the snow every morning, that trip couldn’t have come at a better time!)  Among the many highlights of our trip was the food.  (Surprised?)  We visited small trattorias all over Italy, and we ate some of the best food I’ve ever eaten.  One of the most memorable meals involved this Napoleon Hat Pizza.  It was part pizza, part calzone, and I’ve been thinking about it ever since! 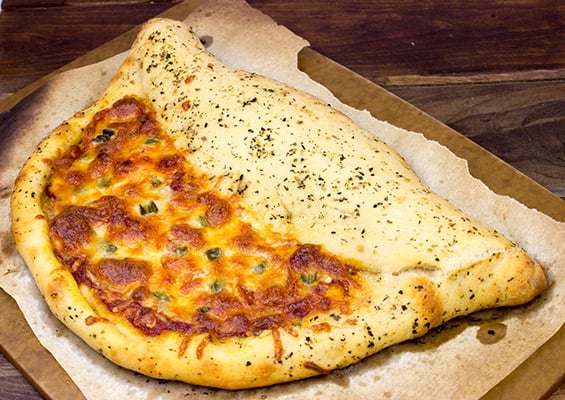 I should probably explain a bit more about how I came across this Napoleon Hat Pizza.  We had taken a detour to Assisi to visit Massimo Cruciani’s art gallery.  (On a side note, if you ever get a chance to see Massimo’s work, it’s well worth your time.  He paints on the back of glass, and his artwork is absolutely stunning.  We have two pieces of his work, and I’d love to get more someday.)  But back to the pizza!  We actually went to dinner the first night with Massimo and a couple of his colleagues, and that evening is a whole story in itself.  Massimo was heading out of town the next day, but he recommended that we check out a nearby restaurant that he claimed made the best pizza in the world.  Ok, so I was intrigued.  Best pizza in the world?  We had to go there for dinner. 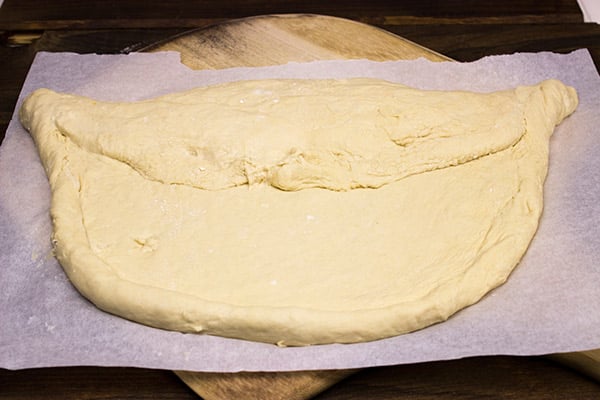 After getting lost in the winding streets of Assisi (again), we found the Monaci Pizzeria and ventured in.  We soon discovered that most of the wait staff only spoke very limited English.  Between our broken Italian and our waiter’s broken English, we managed to place our order.  For the record, I still didn’t know exactly what I had ordered at that point.  But I did know that they served prosecco from a tap in 1 liter pitchers.  Pizza and sparkling wine?  Count me in! 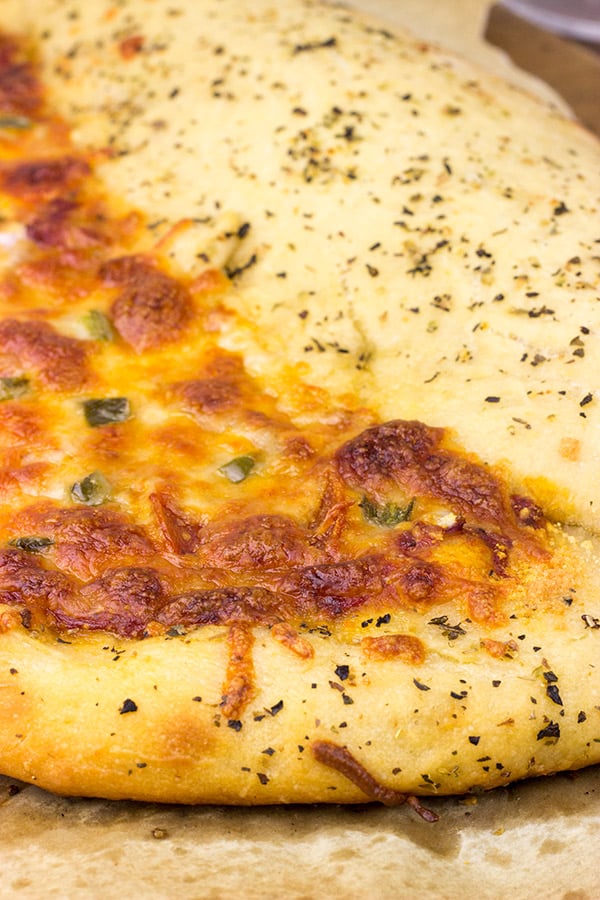 When my meal arrived, I discovered that it was some sort of hybrid between a pizza and a calzone.  Actually, check that.  It was both a pizza and a calzone.  Joined together.  On one plate.  I hope you can imagine my sheer wonder at this creation which I dubbed the “Napoleon Hat” because the calzone portion of the pizza resembled the shape of Napoleon’s two-cornered hat.

The Napoleon Hat Pizza was easily the best pizza I’ve ever eaten in my entire life, and I’ve eaten a lot of pizza.  Ever since that trip, I’ve been thinking about that pizza and how I could recreate it at home.  So I finally took the challenge and made this amazing pizza + calzone creation.  If only I had a liter of house prosecco to go with it!

For this Napoleon Hat Pizza, I made a 1.5x batch of my favorite pizza dough.  The biggest challenge was figuring out where to place the calzone filling so that the final creation resembled a Napoleon hat.  I also baked the pizza at a slightly lower temperature than normal to compensate for the longer baking time needed for the calzone.  The project was fun, and the result was delicious.  Now I’m off to figure out how to make my own prosecco! 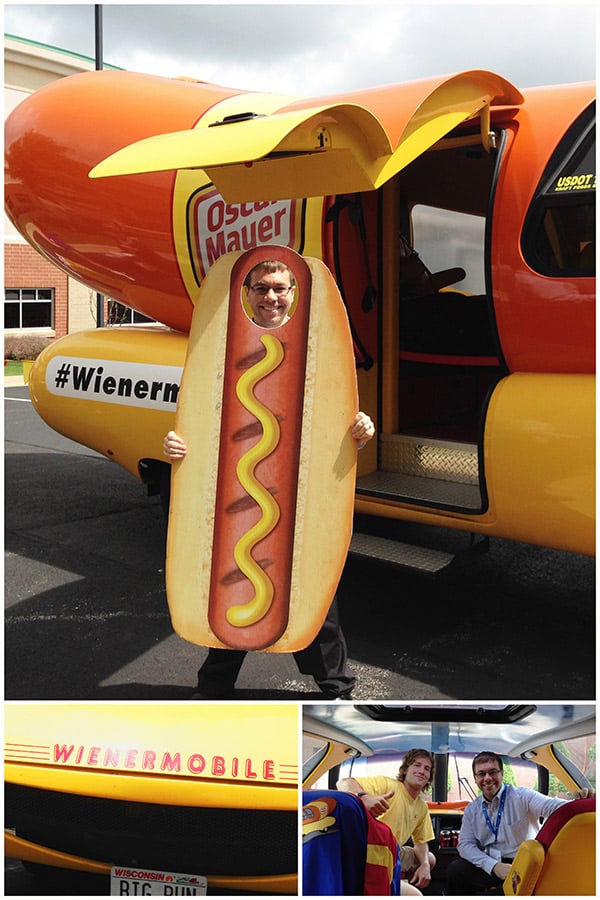 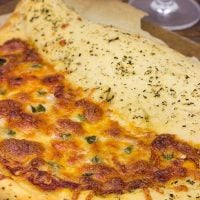 For the Calzone Filling

For the Pizza Toppings

For the Olive Oil Herb Mixture

For the Calzone portion

For the Pizza portion