This Meat Lover’s Pizza is loaded with cheese, sausage, bacon and pepperoni…and it’s guaranteed to satisfy that pizza craving! 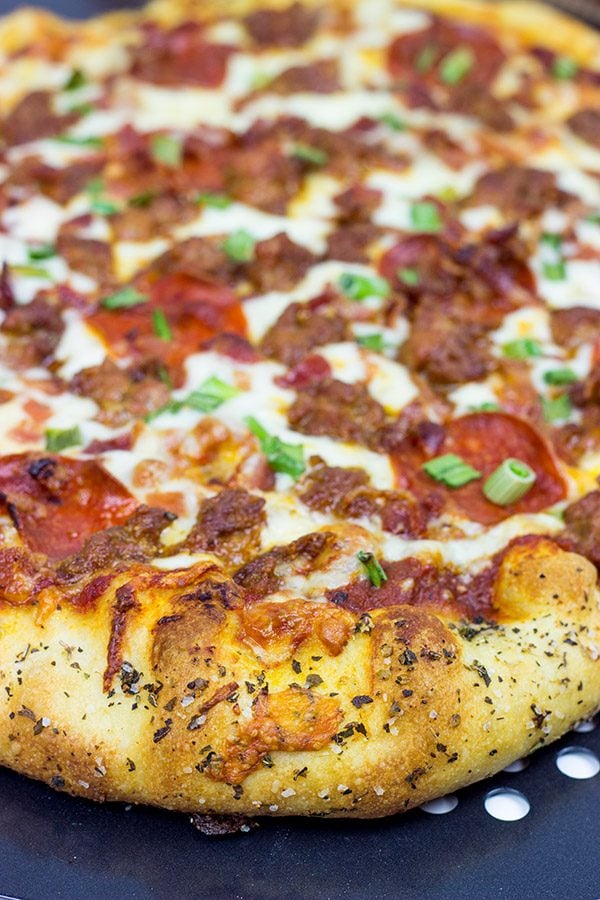 Did you guys hear the news about the taco cannon that will be making regular appearances at the University of Nebraska’s new sports arena this fall?  Yup, you read that right.  A taco cannon.  I mean, I’ve seen t-shirt cannons.  (I think I even caught a t-shirt out of one of them back when I was in high school.)  But taco cannon?  Now that’s straight genius!  This cannon is no joke, either.  It’s powered by an air compressor to launch glorious tacos hundreds of feet into the crowd.  Now that is very definition of dude food! 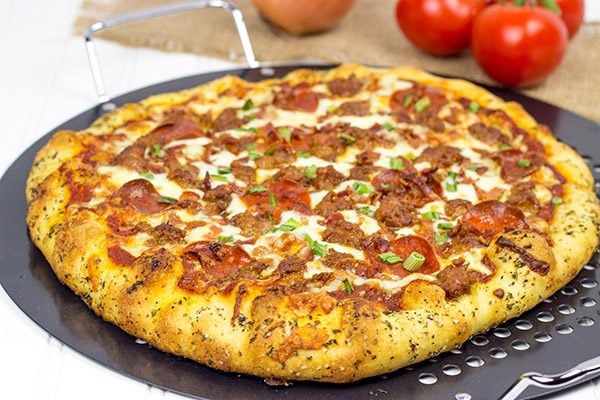 I’m just imagining what I would do if I had a day to spend with the taco cannon.  I’m thinking it would be an entirely new form of backyard entertainment.  Goodbye, handheld mosquito zapper.  Hello, taco heaven.  I wonder if I could launch a taco across the street and have it land right in my neighbor’s lap as he gets out of his car after work?  I think it’s worth a shot!  Of course, I guess the downside is I could end up raining guacamole, salsa and pico de gallo all over his new car.  Ok, so maybe I shouldn’t be allowed to play with the taco cannon… 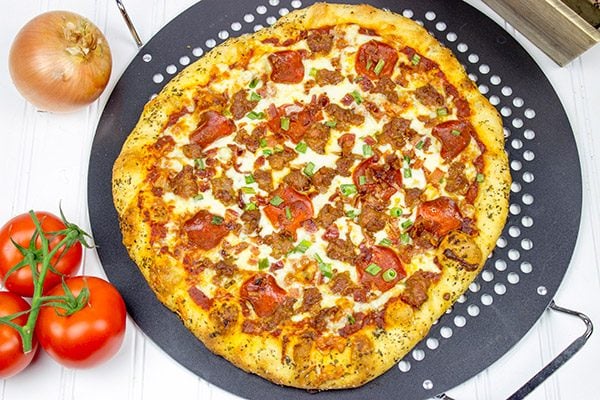 I think I should stick to making pizzas instead.  Speaking of pizzas, my wife and I made this Meat Lover’s Pizza the other night…and it was seriously delicious!  This pizza is pretty much a meat lover’s dream.  I’m talking the ultimate type of dude food right here.  In fact, this pizza was so good that we ended up making it again the very next night when we had two of our friends over for dinner.  (You know it’s good when you  can’t wait to eat a meal two nights in a row!) 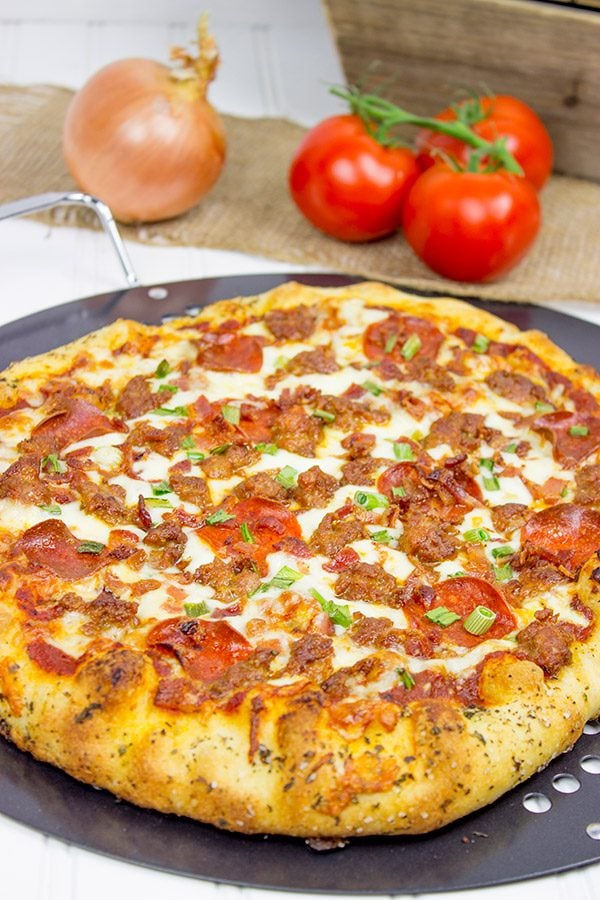 Our friends just got engaged about two months ago, and we spent part of the evening talking about their upcoming wedding plans.  My wife and I have been married for almost 5 years now, and I still remember those wedding planning days.  It’s crazy how much time and thought you put into it, and then the day just flies by.  I seriously remember looking down at my watch at some point during the reception and thinking, “Woah…there’s only 20 minutes left!” 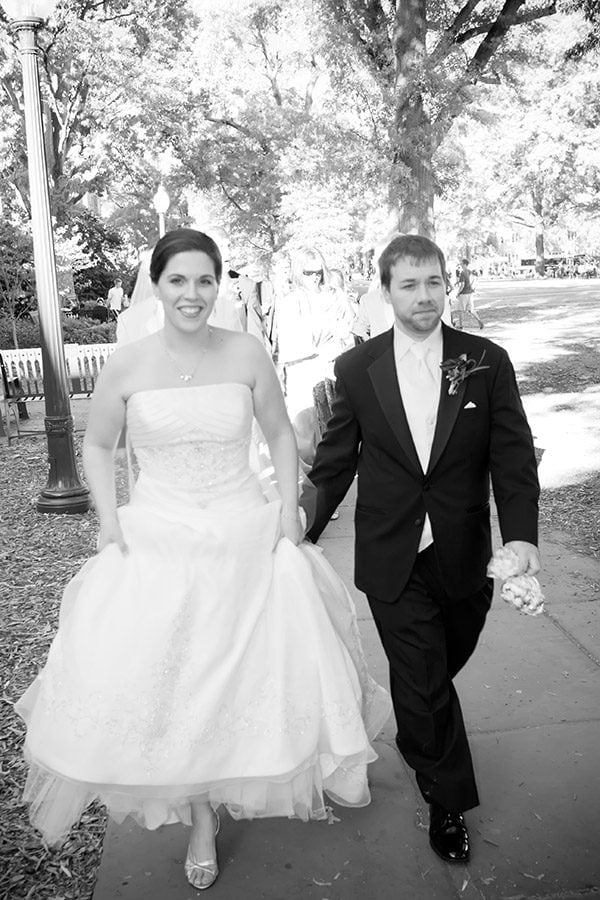 One of the things that we talked about on Saturday night was beards.  We’ve only ever known our friend with a beard.  (We actually met him curling this past season as he was the captain–aka skip–of the first team we ever played on.)  But somehow he mentioned that he was thinking about shaving his beard for the wedding.  I was actually in the exact same position before our wedding…but I was debating on whether to grow the beard.  I ended up growing a very short beard for our wedding, and it totally worked.  But, man, did my family give me a hard time about that beard! 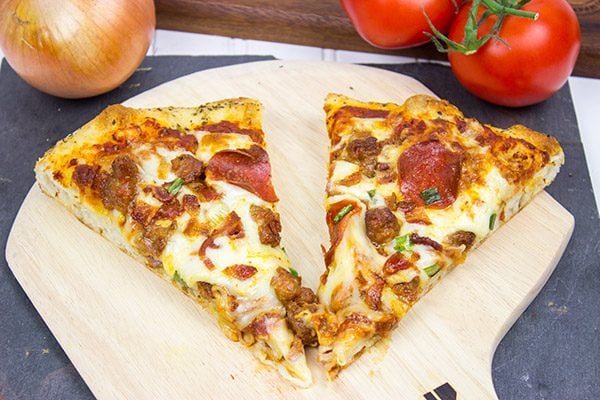 So I’ve kept that short beard ever since our wedding 4+ years ago.  I initially decided to keep it because I didn’t want to shave.  But here’s the thing about a beard.  It doesn’t look good unless you shave.  You gotta keep that bad boy trimmed up, or you end up looking like some sort of wildebeest that wandered in from the woods.  No one wants to look like a wildebeest.  For me, that’s where Schick Hydro® comes in.  The Hydro® hydrates and protects my skin leaving me free to worry about more important things…like creating this delicious Meat Lover’s Pizza.

If my buddy does decide to shave his beard for his wedding, then you can absolutely count on me throwing him an epic beard retirement party!  (Hey, it’s a totally legit excuse to get together and eat awesome dude food, right??)

What are your favorite pizza toppings?  More importantly, would you eat a taco that had been shot out of a cannon?

Did you make this Meat Lover’s Pizza at home?  Leave a comment.  Or snap a photo and tag me on Instagram (@Spicedblog)!

Looking for other tasty pizza recipes?  Check out some of these other favorites, too: 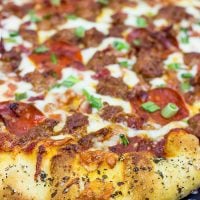 Thank you for supporting the brands that support Spiced.  Without this support, I wouldn’t be able to bring these delicious recipes to you several times a week!  (Plus, my wife appreciates that I don’t look like a wildebeest.) 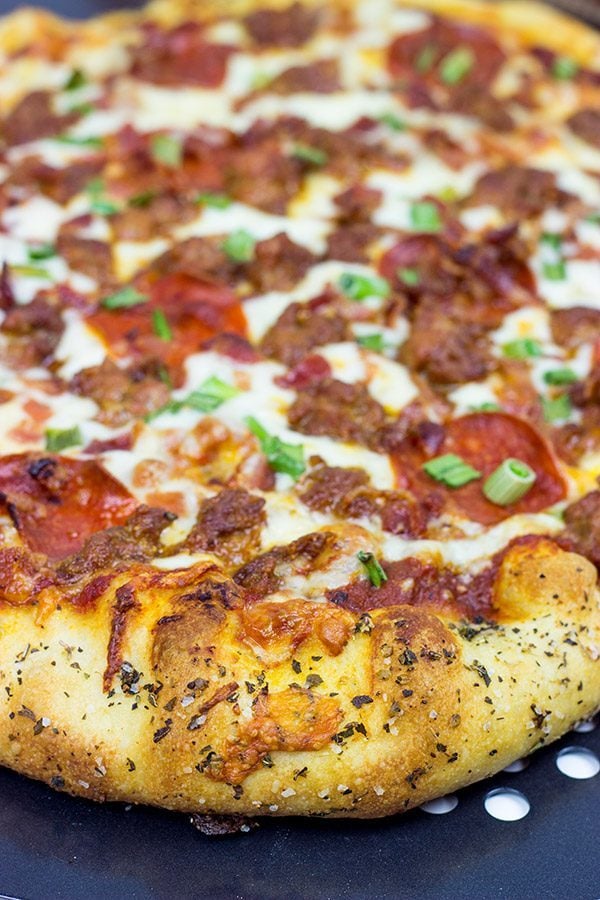