Looking for a delicious Fall dessert?  This Maple Cheesecake with Pecan Pralines is packed with maple flavor, and it’s perfect for a chilly Autumn evening! 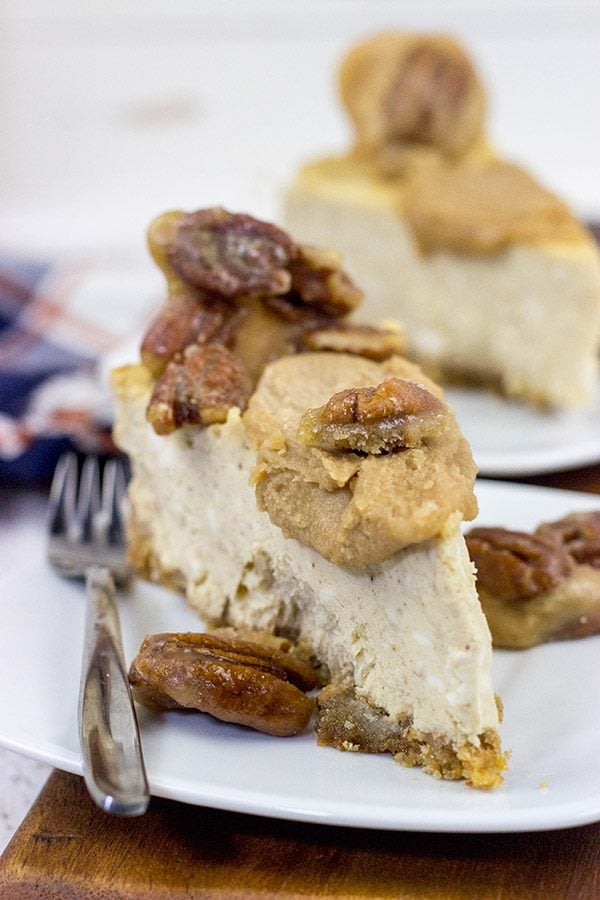 “Here you go, Daddy, here you go.”  As I’ve written about before, one of my favorite weekly chores is grocery shopping.  Now I know that ‘favorite’ and ‘chores’ don’t often go together in the same sentence, but this is different.  Every Sunday morning, I load Robbie in the car, and we head off to the store for Robbie-Daddy time (aka grocery shopping).  He sits in the cart directing me where to go while I work my way through the list.  But the best part?  Checking out!

Once we’re all done shopping, we head up to the self-checkout line, and that’s where Robbie goes to work.  He hands me each item from the cart while I scan it and put it in bags.  Last week, he got tricky and tried to hand me his snack container (we always go to the store with a snack in hand).  At first I thought he was confused, but then I realized he had a smirk on his face.  That little bugger! 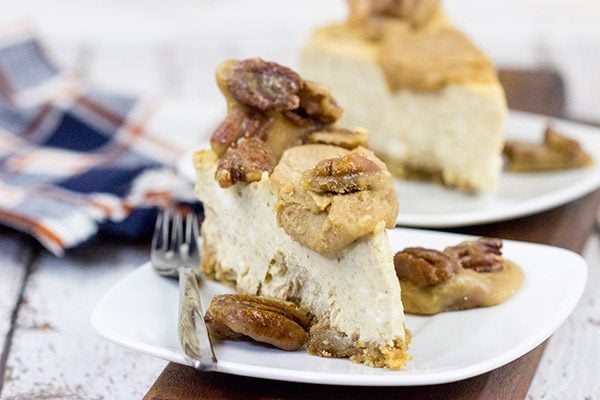 How do you prefer to checkout in grocery stores?  I always use the self-checkout line.  I find it’s so much faster and easier than waiting in the traditional line.  And apparently I’m not the only one!  According to a recent study, the majority of shoppers (95%) want to be left alone in stores.  Furthermore, 85% of us would rather use technology than find a store employee.  Case in point: the digital price scanners vs. asking an employee.  I’m definitely in the majority here!  I find it incredibly annoying to track down someone vs. just scanning the item on a digital scanner.  Maybe this is a generational thing?  Either way, I want to get in and get out.  (The one exception is when shopping for higher-priced electronics.  In that case, I usually want to hear what an employee has to say.) 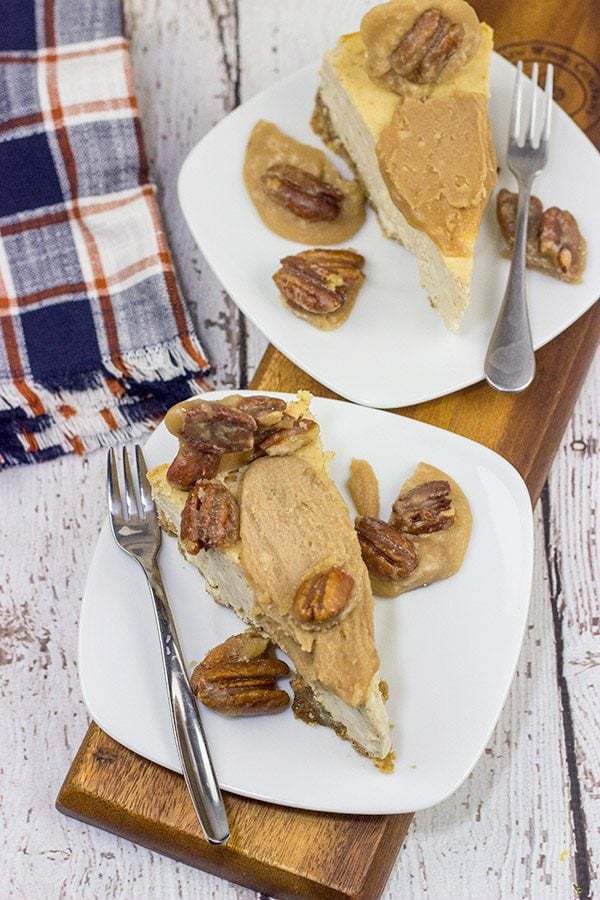 This past week, Robbie and I grabbed several packs of cream cheese along with some pecans and brown sugar.  The goal: this Maple Cheesecake with Pecan Pralines.  I didn’t need to grab maple syrup as we stockpile nature’s candy whenever we take road trips into Vermont.  Growing up, maple syrup was typically that stuff in squeeze bottles.  However, as I’ve grown older, I’ve seen the folly in my ways.  Sure, real maple syrup is more expensive that the squeeze bottle stuff…but the difference in taste isn’t even comparable! 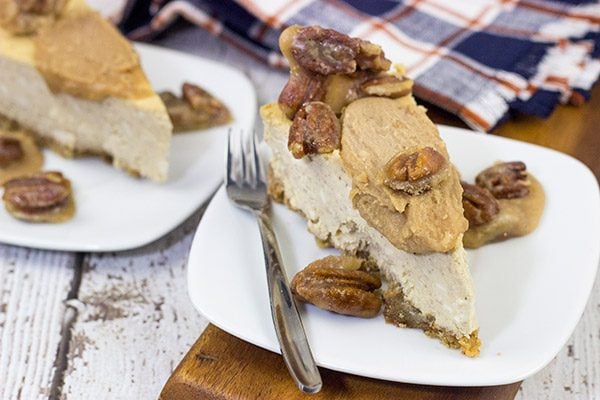 This Maple Cheese with Pecan Pralines just screams Fall to me.  The creaminess of the maple cheesecake combined with the crunch of pecan pralines is the perfect dessert for a chilly Fall evening.  Laura and I got a fire table last year, and we ate a couple of slices of this Maple Cheesecake while sitting on the back porch next to that fire table.  Add in a glass of bourbon with a couple drops of water, and you’ve got one delicious end of the day! 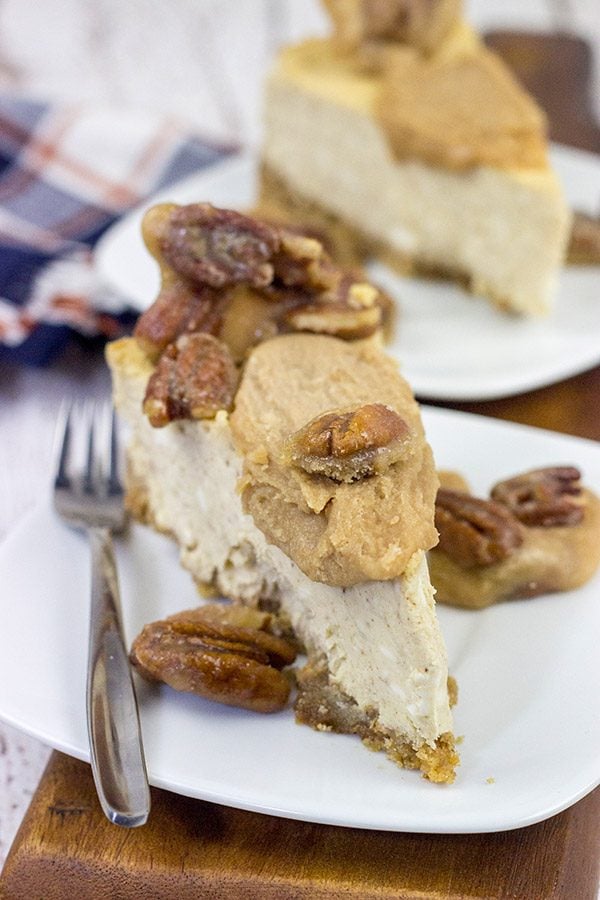 I including a maple frosting on top of this cheesecake, but truthfully it doesn’t even need it.  Originally, I was thinking the frosting would be needed to really boost the maple flavor, but the maple cheesecake has plenty of maple deliciousness as it is.  I left the frosting in the recipe below so that you can make the choice…I promise it’ll be delicious either way!  I hope you enjoy this Maple Cheesecake with Pecan Pralines as much as we did.  Cheers, friends!  And if you make this maple cheesecake, swing back by and let me know what you think, ok?

Love maple?  Here are some more of our favorite maple recipes! 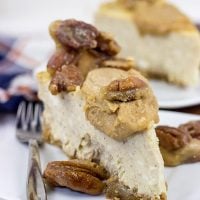