This Lowcountry Shrimp Perloo is easy and delicious…perfect for a weeknight meal! 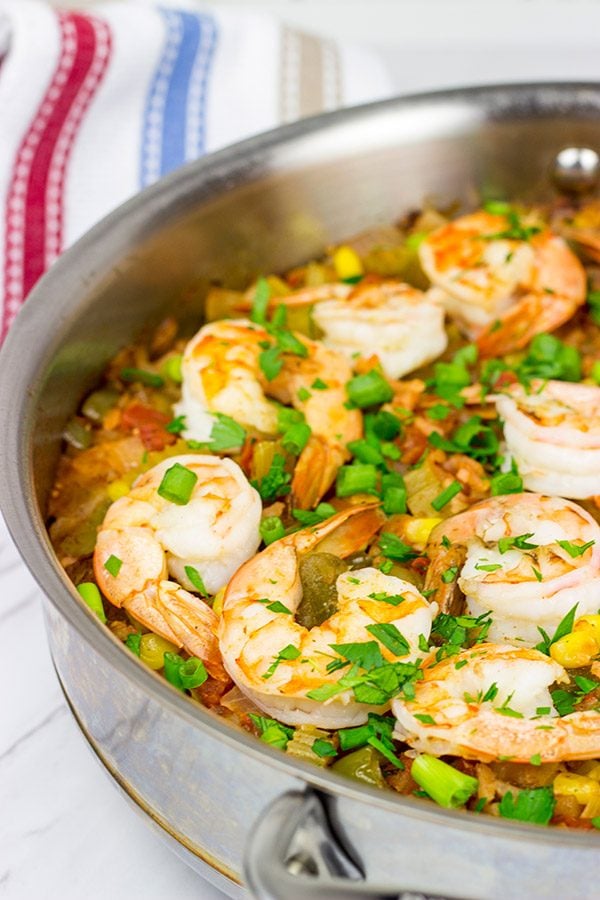 You guys might remember that I grew up on the cobblestone streets of Charleston, SC.  I sold lemonade to tourists in the summer, and we had a Basset hound named Beauregard.  The house across the street was haunted.  (And I think ours was, too.)  In the early 1700’s, several pirates and their crews were hung in a park just down the street from our house.  Yes, actual pirates.  Needless to say, I had a unique childhood.  It probably explains a lot of things…not the least of which is my love of history as well as Charleston itself.

Among the many unique things about our house was the joggling board.  Have you guys heard of joggling boards?  They’re kinda like a swing and a bench combined into one.  Essentially, joggling boards feature a 16-foot long, flexible board attached to stands on either end that rock like a rocking chair.  The result is a toy/bench/swing that is an iconic fixture on porches and piazzas throughout the South.  According to legend, there was never an unmarried daughter in a home with a joggling board.  As the story goes, suitors would pay visits to young ladies, and both would sit on separate ends of the joggling board.  As they gently bounced on the flexible board, both would gradually slide to the center.  And the rest is history.  (This photo is from our house when I was a kid.  And that’s Dog Charlie right there trying to stay cool in the Charleston heat.) 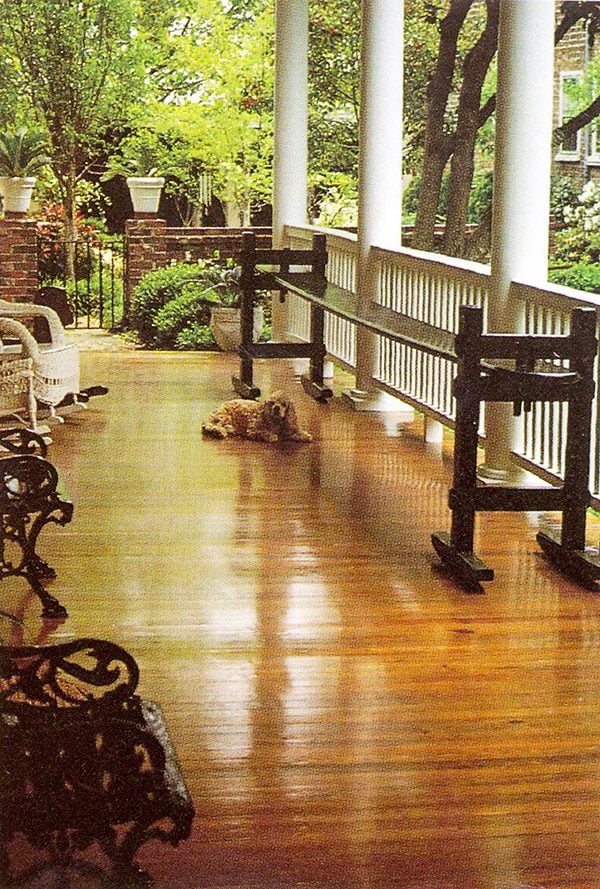 We also grew up eating lots of iconic Southern food.  Fried shrimp, pimento cheese sandwiches, buttermilk biscuits.  It’s no wonder why I rank Southern food right up there at the top of my list of favorites!  This Lowcountry Shrimp Perloo has earned a permanent spot on that list, and I still make it occasionally.  It’s an easy, one-pot meal that is really darned tasty. 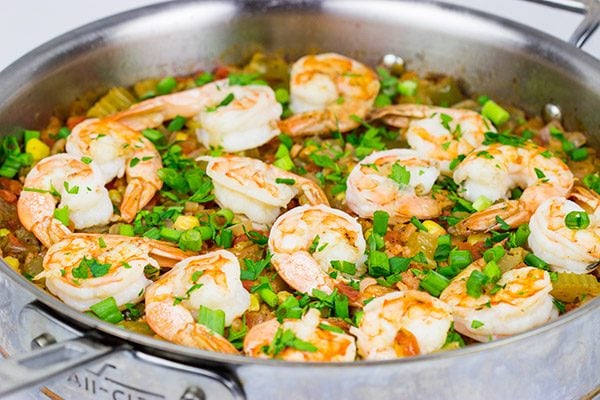 So what is perloo?  Well, let’s start by saying that the ‘lowcountry’ is the coastal area along the southern South Carolina and northern Georgia coasts.  This includes cities like Charleston, SC as well as Savannah, Ga.  Perloo is a classic dish in this area, and there are many, many variations of perloo.  Different versions include shrimp, oysters, chicken, sausage, etc.  Essentially, whatever meat you have on hand can go into perloo.  Add some rice and veggies, and you’ve got yourself a perloo. 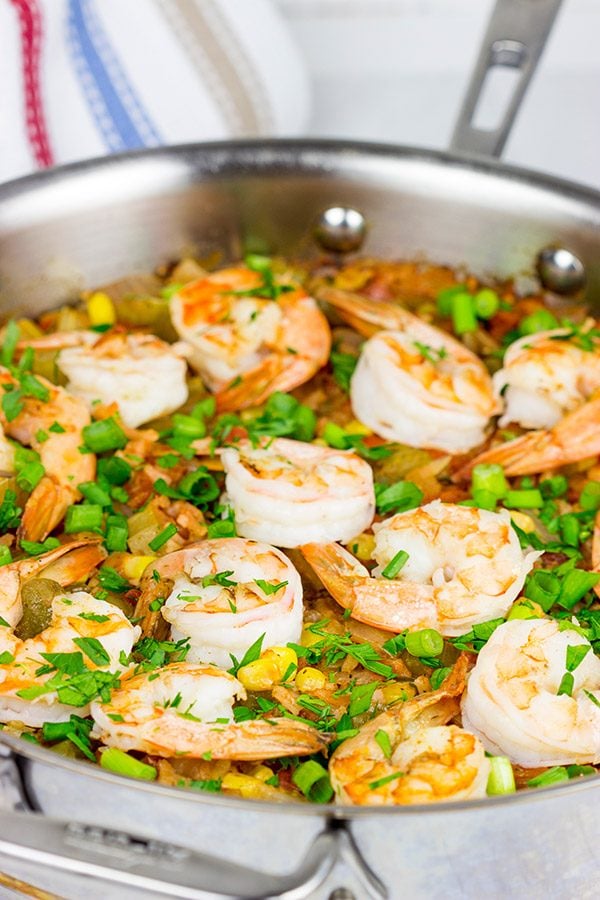 I didn’t realize it until I lived in south Louisiana after college, but perloo is quite similar to jambalaya.  In fact, I’ve even thrown a healthy amount of Cajun seasoning into this perloo for flavor.  Have you guys ever noticed how food is similar across various regions and cultures?  I’m not saying all food is exactly the same, but the German dumpling is remarkable similar to the Italian gnocchi.  While the dough is different, you can see obvious parallels between raviolis and pierogis.  Likewise a Cajun jambalaya is not that different from this Lowcountry Shrimp Perloo.  Except the Cajun version would include crawfish.

For this version of Lowcountry Shrimp Perloo, I used shrimp and bacon.  Shrimp because our grocery store had an amazing sale on shrimp the other day.  Bacon because, well, bacon.  Perloo is a classic southern dish, and it’s one of my favorites.  Plus, it makes for a great weeknight meal as it only involves cleaning a pot, a cutting board and a knife.  Enjoy!  (And if you ever come across a joggling board, then hop aboard and joggle on, my friend.) 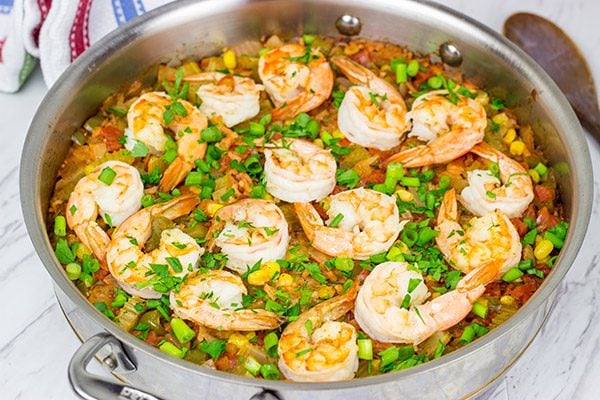 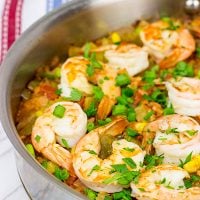