A Lowcountry Boil is a classic Southern recipe famous along the South Carolina coast. This combination of shrimp, sausage, corn and potatoes is ideal for a backyard party with friends!

Several weeks ago, Robbie, Laura and I packed our bags and headed down to Charleston, SC for a week at the beach. I used to say that I’m not much of a beach vacation kinda guy. Well, that changed once Robbie came along. Sitting on the beach relaxing while Robbie built sand castles and swam in the tide pools was pretty darn awesome!

We stayed about 20 minutes outside of downtown Charleston on Folly Island, SC. Folly is a small island with a quirky vibe – and it was great for a vacation! The downtown area was small (~3-4 blocks total), but it was packed with tasty beach restaurants. I ate more seafood in that week than I’ve eaten in years!

Speaking of seafood, when Laura and I were researching things to do at Folly Beach, SC, we stumbled across a local company that will do a Lowcountry Boil at your house. They had a minimum of 10 people, and there were only 5 of us – but that didn’t stop us! We just saved the leftovers for the next day. And let me tell ya, Lowcountry Boil leftovers are pretty tasty! (In case you have plans to travel to Folly Beach, the company we used was The Smoking Pot – we highly recommend them!)

What is a Lowcountry Boil?

A Lowcountry Boil is a uniquely Southern recipe. More specifically, it’s a uniquely Carolina recipe. It shares many similarities with a Louisiana Crawfish Boil, but the Carolina version uses shrimp instead of crawfish. In addition to the peel-and-eat shrimp, a traditional Lowcountry Boil also includes red potatoes, sausage and corn.

A Lowcountry Boil is meant to be served with friends outdoors. In fact, you’ll notice that this recipe calls for using a very large pot – the kind you might fry a turkey in. I used a 29-quart stainless steel pot that I set over an outdoor propane burner. By the time all was said and done, the pot was full. Full of delicious shrimp, corn, sausage and potatoes!

Other names for a Lowcountry Boil

While Lowcountry Boil is the most common name for this recipe, it is also called Frogmore Stew, Beaufort boil, tidewater boil or a Carolina One-Pot. (No, there are no frogs involved in a Frogmore Stew. Instead, the term comes from a community named Frogmore that was located on St. Helena Island near Beaufort, SC.)

How to Make a Lowcountry Boil

Aside from having the unique cooking tools (i.e. a very large pot and an outdoor propane burner), a Lowcountry Boil is actually very easy to make. The key is the order in which you add the ingredients. Potatoes take the longest time to cook, so those go into the pot first. After that, the sausage, corn and finally the shrimp get added in different time intervals. (The shrimp go in last as they cook in just 1-2 minutes.) This is truly a one pot meal!

What seasonings are used in a Lowcountry Boil

The spices used in seafood boils are typically a bit milder than the ones used in crawfish boils. Old Bay is the most common, although Zatarain’s crab boil is frequently used if you want to add a bit of a Cajun flare to your boil. Aside from the dry seasonings, you often add a couple of lemon wedges, some garlic bulbs, bay leaves, peppercorns and salt to the pot. The combination of seasonings in this recipe is flavorful, but not overly spicy. Of course, you can adjust the seasonings to fit your personal preferences.

At the end of the day, a Lowcountry Boil is the kind of meal where you spread newspaper on a backyard table, call over your friends, pop open a cold beer and enjoy a meal that’s perfect for feeding a crowd. No dishes needed. That’s exactly what we did here, and we had fun spending time together over delicious food.

I hope you enjoy this Lowcountry Boil recipe as much as we do! And if you make your way to Folly Beach, drop me a line – we love Charleston and Folly Beach so much that we plan on making our vacations there a summer tradition!

Did you make this Lowcountry Boil at home? Leave a comment, or snap a photo and tag me on Instagram (@Spicedblog) – I’d love to see your version! 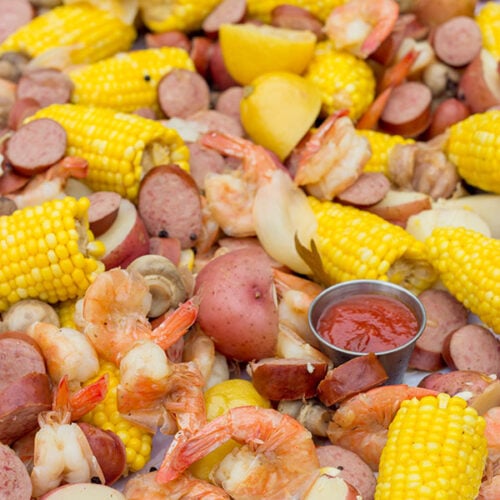 This low country boil recipe makes enough to feed a crowd. I recommend using an outdoor rig with propane burner and 7-gallon stainless steel pot – similar to what you might see for frying a turkey. These are often sold as a kit, and I’ve found that they are readily available in most larger stores that sell grills. You could certainly make a smaller version of this recipe using a large stock pot indoors, but you will need to reduce the quantities in the recipe – I’d estimate start with about 20% of the ingredients listed. A number of companies make crab and shrimp boil seasoning. Old Bay seasoning is a classic for Low Country Boils, but Zatarain’s makes a tasty version that’ll lend a spicier Cajun flare to your boil. If your red potatoes are too large, just cut them in half or quarters before adding them to the pot.

Looking for more classic Southern recipes? Check out these other favorites, too: