This Hearty Irish Potato + Leek Soup is a classic Irish recipe…and it tastes especially good on a cold winter day!

I don’t know about you, but I think it’s still soup season.  Here in upstate New York, the weather has gotten a bit warmer lately, but the nights are still quite chilly.  And nothing warms you up like a hot bowl of hearty soup on a cold night!  Since St. Patrick’s Day is drawing close, it’s a perfect excuse for making a Potato + Leek Soup.  This is a rich and hearty soup that is certain to become a family favorite…and it’s really not that hard to make, either!

This soup is a traditional Irish comfort food served on cold, winter nights.  Partner it with a thick slice of buttered Irish Soda Bread for a truly Irish meal!  As a side note, this dish also tastes great cold (when served cold, it’s called Vichyssoise).

I used an immersion blender for this soup as I prefer the texture to be perfectly smooth and creamy.  (On a side note, if you’ve ever tried using a blender to puree a hot soup, you know how valuable an immersion blender can be!)  Sometimes I do like this soup to have a bit more texture, and I simply remove a couple ladles of the unpureed soup before using the immersion blender.  Then I mix the pureed and unpureed portions back together. 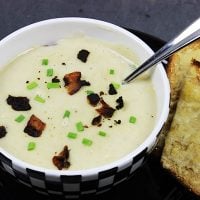 Roasted garlic can often be found in bulk bins in the deli section of your market. You can also roast your own garlic. If you’ve never roasted your own garlic, then stay tuned to Spiced in the coming weeks (hint: it’s really easy)!

One note when making this soup is to carefully and thoroughly clean your leeks.  Leeks (a member of the onion family) grow out of the ground, which means that dirt often gets trapped in the leafy greens.  There are several common ways to clean leeks, but I prefer to chop them and place them in a large bowl of water for about 5 minutes.  Then simply scoop the leeks out with a slotted spoon.  The dirt will be left at the bottom of the bowl.  (Spoon the leeks out rather than pouring them through a colander…if you pour the bowl into a colander, you will just dump the settled dirt right back on top of the leeks!)