Love guacamole? Try skipping the chips and using potato skins instead! These Guacamole Potato Skins are a tasty and fun appetizer!

Holy guacamole, Batman!  I love this time of the year.  All of the markets in the area are competing for Cinco de Mayo sales, which means I can find cheap avocados everywhere.  I live in upstate New York, which means avocados are normally pretty expensive…after all, it’s been a while since I’ve seen an avocado tree in the area.

Since we’re not as lucky as folks in California who can pick avocados in their backyards, we have to rely on the markets for these delicious fruits.

Since avocados are plentiful right now thanks to Cinco de Mayo, I have been making tons of guacamole.  (You may have seen my post earlier this week on Grilled Guacamole Flatbread with Cilantro-Lime Shrimp.)

So I decided another fun way to use guacamole would be make Guacamole Potato Skins.  I recently made some twice baked potatoes, so I had some leftover skins that I didn’t know what to do with.  So I stuck them in the freezer until earlier this week, when I decided to see if potato skins and guacamole go well together.  Well, they do.  In fact, they were delicious!

The extra sturdiness of the potato skins meant that I could really load up the guac.  My potato skins were already cold from the freezer, but if you are making these fresh, I would let the skins cool completely before filling and serving.  These Guacamole Potato Skins would make a perfect appetizer to your Cinco de Mayo parties this weekend…and best of all, they can be made entirely in advance and stored in the fridge until party time!  Enjoy! 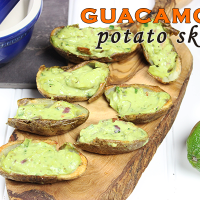 For the Potato Skins

For the Guacamole Filling

For the Potato Skins

For the Guacamole Filling

If you can’t find small potatoes, then just use medium or large ones and cut the skins in half on a diagonal once they are filled with guacamole. Guacamole often turns brownish in color once it is exposed to air. The high amount of citrus juice in this recipe will preserve the green color for a lot longer, but if you need to save these Guacamole Potato Skins, then wrap tightly with plastic wrap and store in the refrigerator.