Celebrate the arrival of Autumn with a glass of this Fall Harvest Sangria.  It’s full of your favorite fruits, and it can be made with either red or white wine! 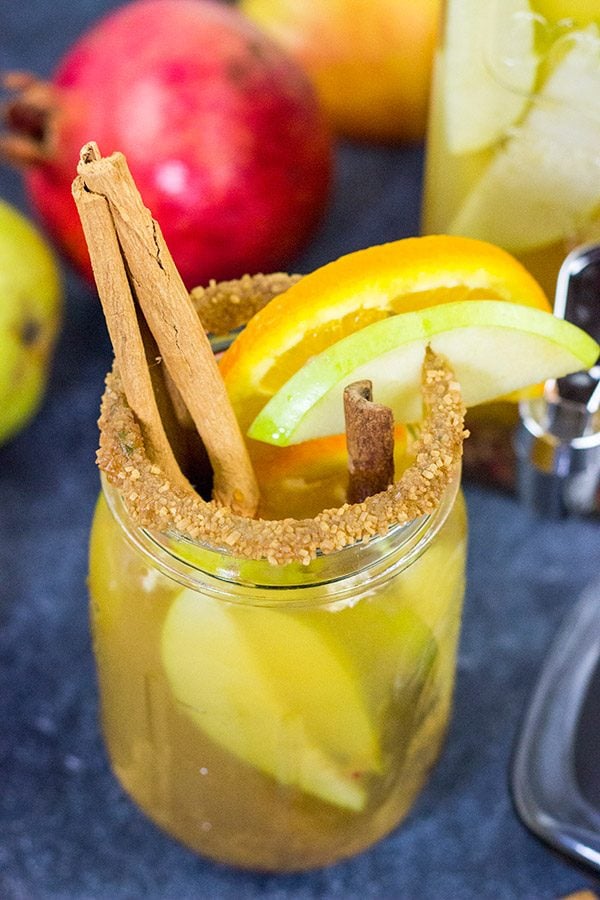 15 years ago, I was living down in south Louisiana working for a bank.  I loved south Louisiana.  I hated working in banking.  I was one year out of college, and I assumed I’d be going to business school at some point.  Then one Sunday afternoon, I was hanging out at my apartment pool chatting with one of my neighbors.  As conversations often go when you just meet someone, the attention turned to our jobs.  She was about to start her job teaching 3rd and 4th graders at a small, private school there in Baton Rouge. 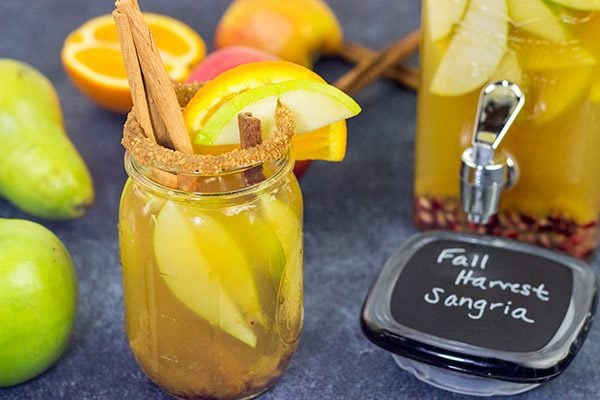 Somehow I mentioned that I had studied Classical Studies in college, and her eyes lit up.  Do you want to teach Latin?  I’m pretty sure I half-laughed and looked to see if she was talking to someone behind me.  Nope.  No one there.  “Uh, I don’t have a clue how to teach.”  “That’s ok.  The principal will teach you how to manage the classroom.  We need a Latin teacher, and school starts this week.”  Fast forward 2 weeks, and I was preparing to walk into the classroom.  Me.  A Latin teacher.  Teaching 3rd-12th graders Latin.

During my interview for the position, I was asked to teach a sample lesson to several kids.  The topic could be anything related to Classical Studies, and I chose to talk about how Latin influences are all around us.  Aside from the fact that ~50% of the English language comes from Latin, there are literally hundreds of references to Roman + Greek culture and mythology.  I brought in some Mardi Gras beads, and we talked about how a bunch of the Mardi Gras parades get their names from Roman and Greek mythology.  Bacchus, Orpheus, Endymion, Hermes…the list goes on.  Then I held up a bottle of Ajax scrubbing powder.  Sure enough, the name comes from a famous Greek hero from the Trojan War. 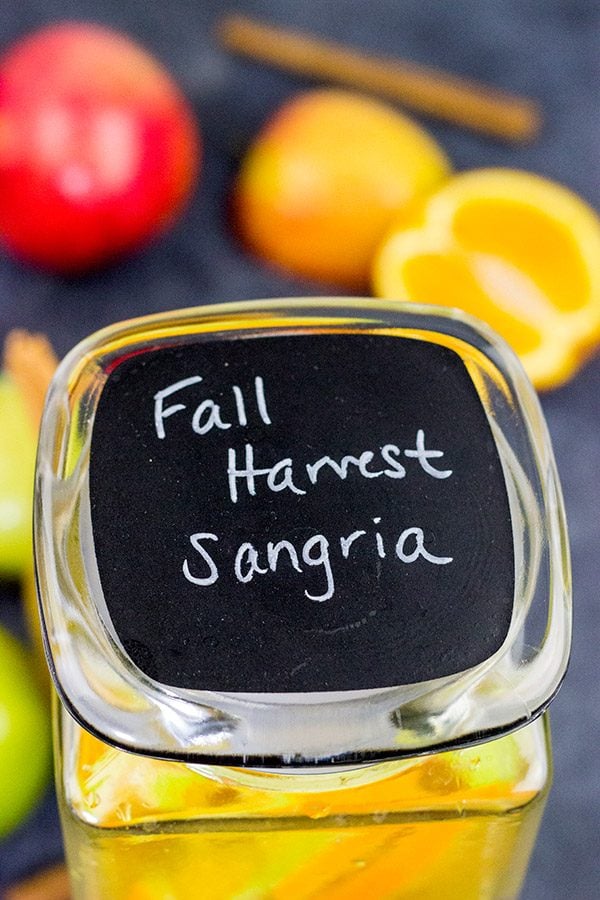 Another example?  I held up a pomegranate, and I asked the kids what that piece of fruit had to do with Latin.  Well, according to Greek mythology, the pomegranate was the ‘fruit of the underworld.’  Persephone, daughter of Demeter, was kidnapped and taken to the underworld where she ate 6 pomegranate seeds.  Her mother came down asking for the return of Persephone, and Hades (king of underworld) negotiated a deal.  Since Persephone had eaten 6 pomegranate seeds, she had to spend 6 months of every year in the underworld.  Demeter, Persephone’s mother, was the goddess of the fields and harvest, and she would mourn for the six months each year when her daughter was gone.  And that’s how the ancient Greeks explained the 6 cold months of winter when no crops would grow. 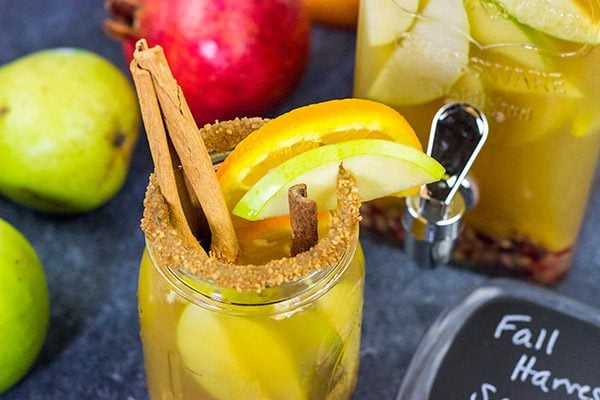 Ok, enough of that little history lesson.  But as I stood at the sink last week picking out the pomegranate seeds for this Fall Harvest Sangria, I couldn’t help but think back to the myth of Persephone.  On a side note, picking out pomegranate seeds is a real pain in the you-know-what.  The seeds (the edible part of the fruit) are embedded in the flesh (the inedible part), and they’re not the easiest to get out.  One trick that I picked up somewhere along the line is to cut the pomegranate in half and put it in a bowl of water in the sink.  Then go along popping out the seeds underwater.  It works!

Once I’d collected enough pomegranate seeds, I set about chopping up the other fruit for this Fall Harvest Sangria.  Apples, pears, oranges.  It all goes in.  Add some apple cider, brandy and a bit of orange juice, and you’ve got the base for one tasty drink!  We’ve actually made this Fall Harvest Sangria with both red and white wines.  Same exact recipe, just changing up which type of wine we use.  For this round, I used white, but red works equally as well!  Just make sure to pick a lighter wine, like pinot grigio (white) or pinot noir (red). 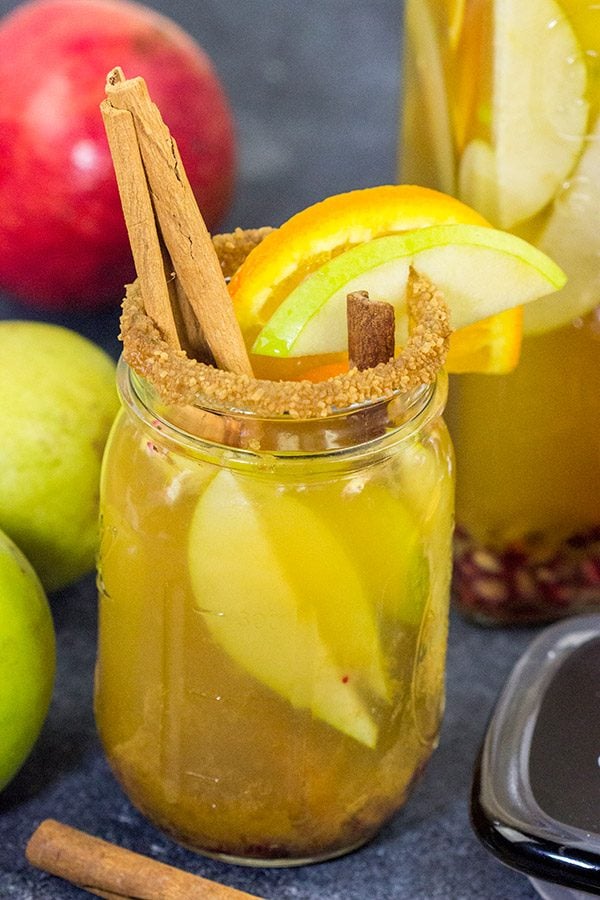 Now that Labor Day and Summer are behind us (already!?), what’s coming up on your weekend agenda?  Apple picking?  Raking leaves?  I’m thinking a glass of this Fall Harvest Sangria would go well with whatever activities you have in store.  Cheers, friends!  Oh, and if you make a batch of this Fall Harvest Sangria, come back and let me know what you think.  Or take a photo and tag me on Instagram (@Spicedblog).

Looking for more tasty drink recipes?  Check out some of these other favorites! 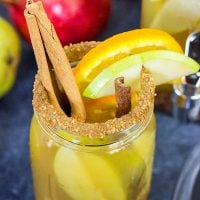 Celebrate the arrival of Autumn with a glass of this Fall Harvest Sangria.  It’s full of your favorite fruits, and it can be made with either red or white wine!
Print Pin Rate
Prep Time: 10 minutes
Cook Time: 0 minutes
Refrigeration Time: 8 hours
Total Time: 8 hours 10 minutes
Servings: 6 servings
Calories: 305kcal

For the Cinnamon Rim

We've actually made this Fall Harvest Sangria with both red and white wines. Same exact recipe, just changing up which type of wine we use. Just make sure to pick a lighter wine, like pinot grigio (white) or pinot noir (red).