Flammkuchen, or tarte flambée in French, is a German-style thin-crust “pizza” topped with bacon and onions…and it’s delicious! 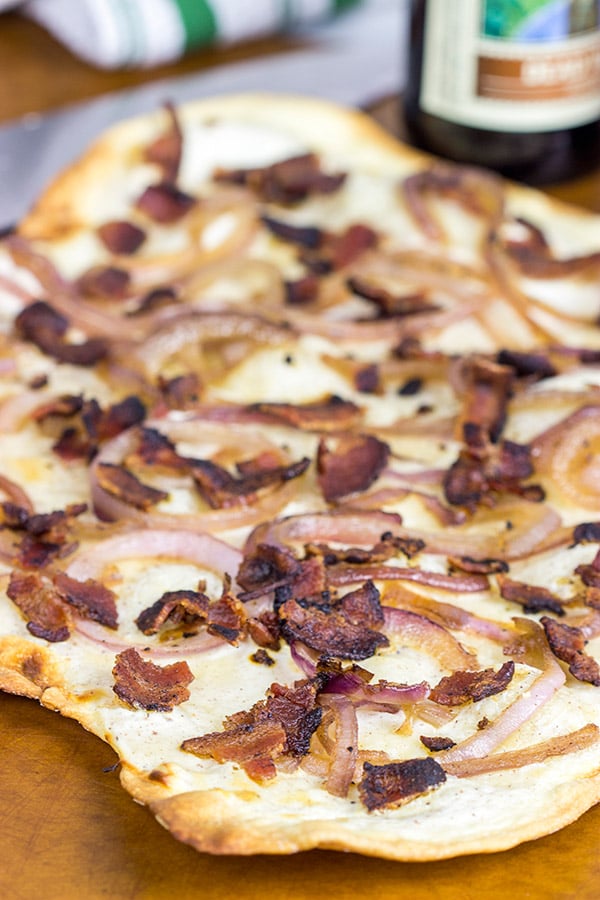 I’ve always loved a good college town.  In the US, a college town is typically one with a main street lined with bookstores, coffee shops and awesome hole-in-wall restaurants.  In Europe, a college town often features amazing skylines dominated by Gothic style architecture.  This past summer, Laura and I visited Heidelberg, Germany as part of our Viking River Cruise down the Rhine River.  Heidelberg is hands-down one of the most beautiful cityscapes I’ve ever seen, and you can get amazing views of the town from the ruins of Heidelberg Castle.  Heidelberg is also one of Europe’s oldest university towns. 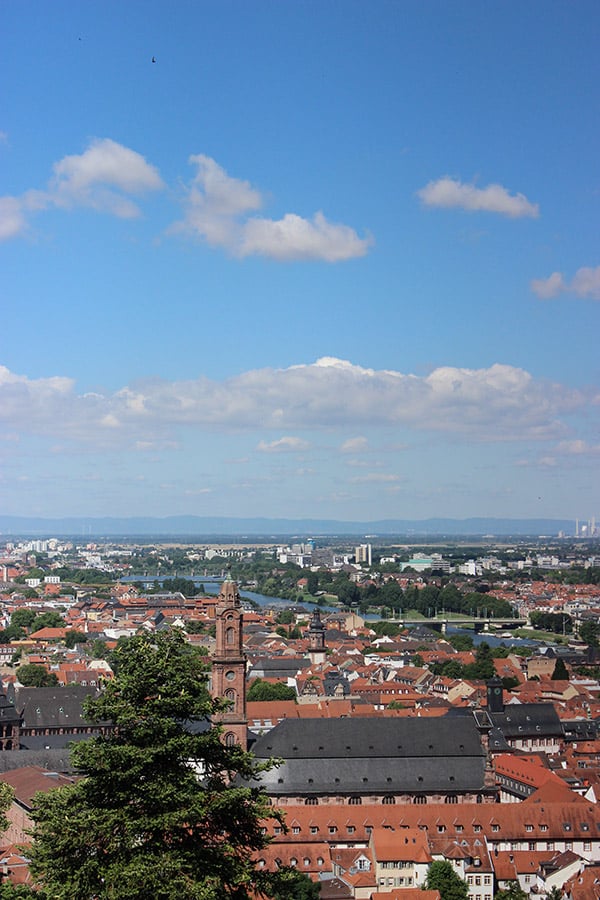 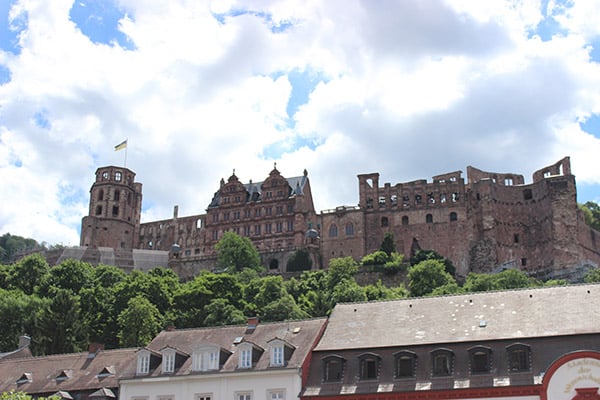 Founded in 1386, Heidelberg is one of Germany’s oldest cities.  The skyline is dominated by the picturesque castle that overlooks the town, although sadly the castle is partly ruined after it was destroyed during the Thirty Years War in the early 1600’s.  Several attempts were made at rebuilding the castle, but none were ever completed.  However, Heidelberg Castle is absolutely still worth a visit.  In fact, after visiting the castle in the late 1800’s, Mark Twain wrote:

“A ruin must be rightly situated to be effective.  This one could not have been better placed.  It stands upon a commanding elevation, it is buried in green woods, there is no level ground about it, but, on the contrary, there are wooded terraces upon terraces, and one looks down through shining leaves into profound chasms and abysses where twilight reigns and the sun cannot intrude. Nature knows how to garnish a ruin to get the best effect.” 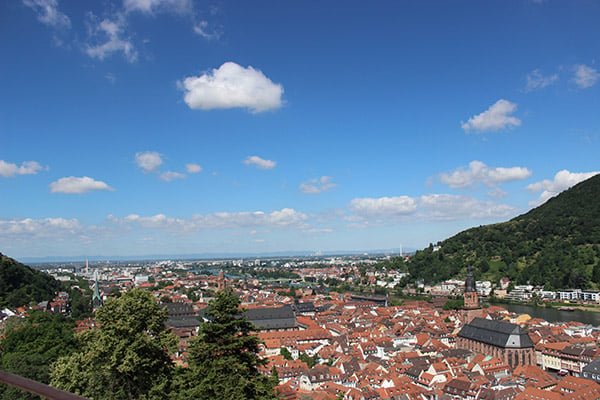 At its height, the castle housed the world’s largest wine barrel.  That wine barrel (known as the Heidelberg Tun) is capable of holding 58,000 gallons of wine, and it still holds the record of world’s largest wine barrel (although it’s no longer in use today).  Now, with that said, it’s worth noting that the wine was likely not very good.  In fact, it was probably downright bad.  That’s because the local residents were allowed to pay their taxes in wine, so they would bring the appropriate amount of their homemade wine to the castle and pour it into the barrel.  So all of that homemade wine got mixed together, and I’m going to take a guess that it just didn’t taste that great.  Just a guess! 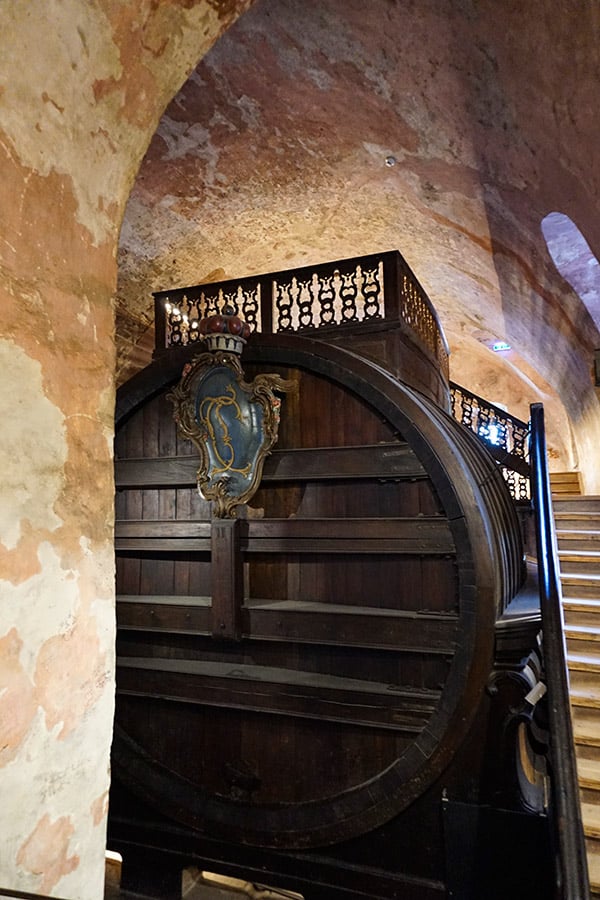 After touring the castle, we spent part of the day wandering around Old Town Heidelberg before we made our way back to the ship.  While we passed a number of delicious restaurants in town, Laura and I just weren’t hungry.  By this point, we’d eaten our way across Europe for over a week, and so we opted to skip lunch in favor of wandering through the cobblestone-lined streets and alleys of Heidelberg.  We made our way over to Heidelberg University (one of Europe’s oldest universities) where we watched several students engaged in a rather spirited match of checkers.  Kinda cool! 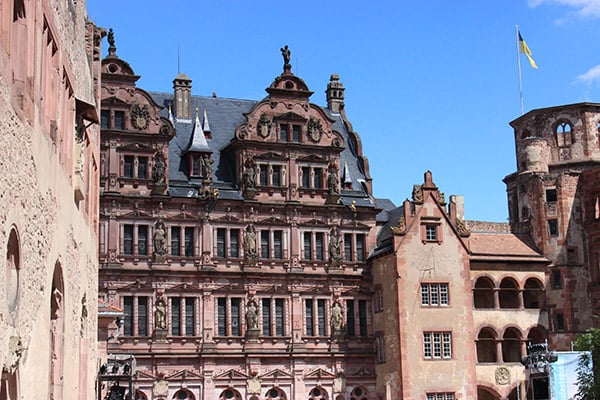 While Laura and I did our fair share of eating and snacking in towns along the Rhine River, I must note that the food on our Viking ship was impeccable.  Seriously!  Going in, I was a bit skeptical about the food as feeding a crowd of 200 people at the same time isn’t easy.  But Laura and I came away from every meal impressed by not only the presentation, but the taste.  One night, I was so full that I just opted for a cheese plate for dinner…and the cheese plate was huge!  It featured all sorts of exotic and delicious cheeses, and I definitely ate every bit of it.  I have a weakness for cheese! 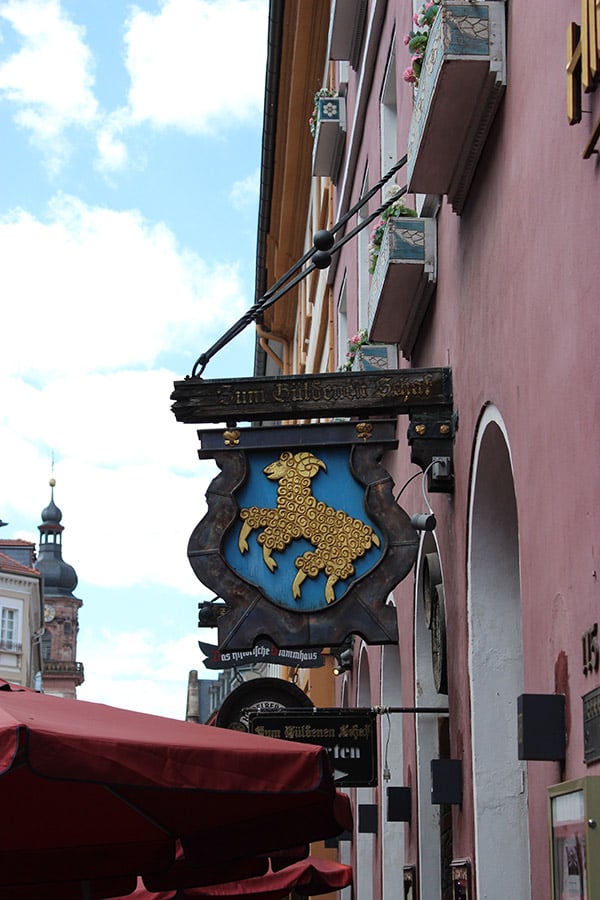 As part of their onboard entertainment, Viking hosted several cooking classes featuring local food and drink.  That’s where we first discovered Flammkuchen.  I like to call Flammkuchen a German-style pizza, but I’m not entirely sure that does this recipe justice.  Flammkuchen features a very, very thin crust (almost like a cracker) that is traditionally topped with sour cream, onions and bacon.  Yes, sour cream on a “pizza.”  Oh, and there’s a pinch of nutmeg in that sour cream topping, too.  (To be fair, an authentic Flammkuchen uses crème fraîche, but crème fraîche isn’t easy to find in stores, so I opted for sour cream.)  While that topping might sound a little suspect, I recommend giving it a shot.  Flammkuchen is quite delicious! 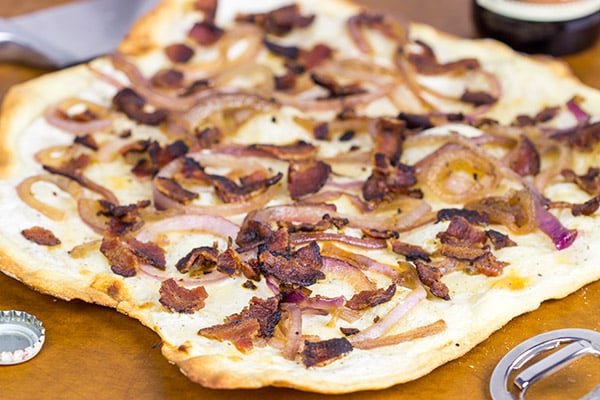 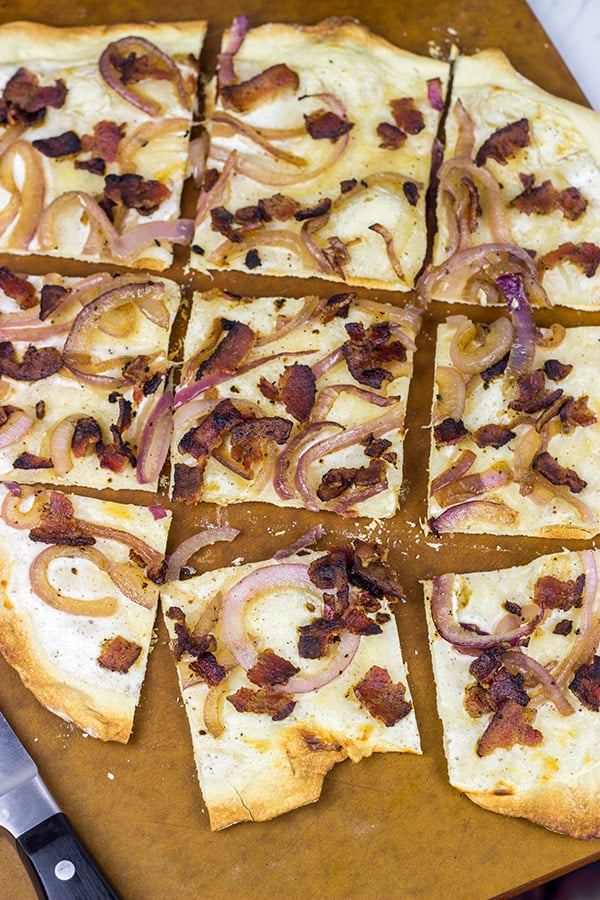 After learning about Flammkuchen in the cooking class on the ship, I finally got around to recreating this one at home.  It’s really not that hard to make at all.  Yes, you do make your own dough.  But that dough doesn’t involve yeast.  (I know some folks shy away from making yeasted doughs at home.)  While the dough is resting, you cook up the bacon and then saute the onions in the bacon fat.  Just stop and think about that for a moment.  Onions sauteed in bacon fat.  They’re every bit as delicious as you might imagine!  Then just roll out the dough super thin (and I do mean super thin) and top it with sour cream, onions and bacon.  Did I mention that the onions are cooked in bacon fat? 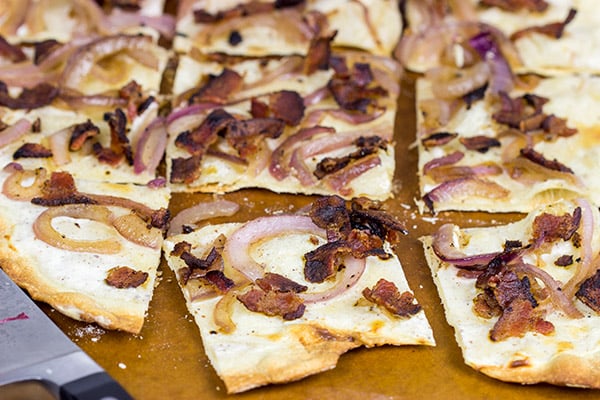 Flammkuchen, also known as a tarte flambée in French, is roughly translated as ‘flame cake.’  It is indeed baked at a high temperature (475°F), and I highly recommend using a pizza stone if you have one.  (This recipe makes two Flammkuchen, so we baked one on the stone and one on a sheet pan.  The one baked on the stone was noticeably better!)  Flammkuchen is a common menu item in southern Germany and northeastern France, and you can often find them with added ingredients like mushrooms, gruyere cheese or munster cheese.  You can also create a dessert version of Flammkuchen using apples and cinnamon, and that one is definitely on my list of things to make on a lazy weekend day sometime soon! 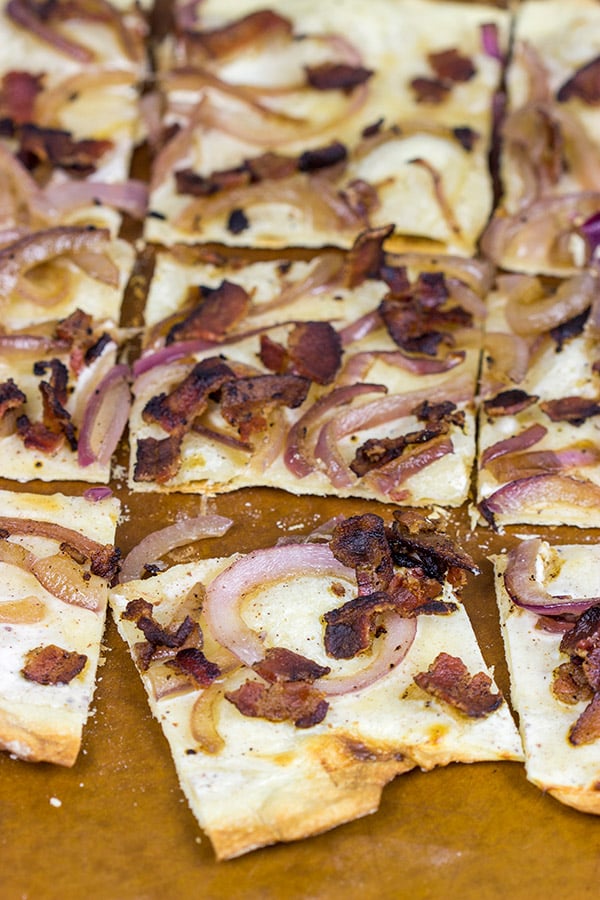 If you don’t have any plans to visit Germany soon, then I highly, highly recommend trying your hand at Flammkuchen at home.  It’s not overly complicated.  Oh, and did I mention that the onions are cooked in bacon fat?  Laura and I shared this Flammkuchen over some Oktoberfest beer from Ballast Point Brewery that I stuck away last Fall (and then promptly forgot about).  It just seemed appropriate that this classic German pub food should be served with a classic German beer.  No matter how you serve it, I do hope you enjoy this one!  Cheers, friends! 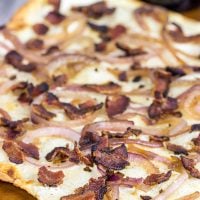