This Cold Cucumber Salad is an easy and healthy side dish that pairs really well with your summer grilling recipes! 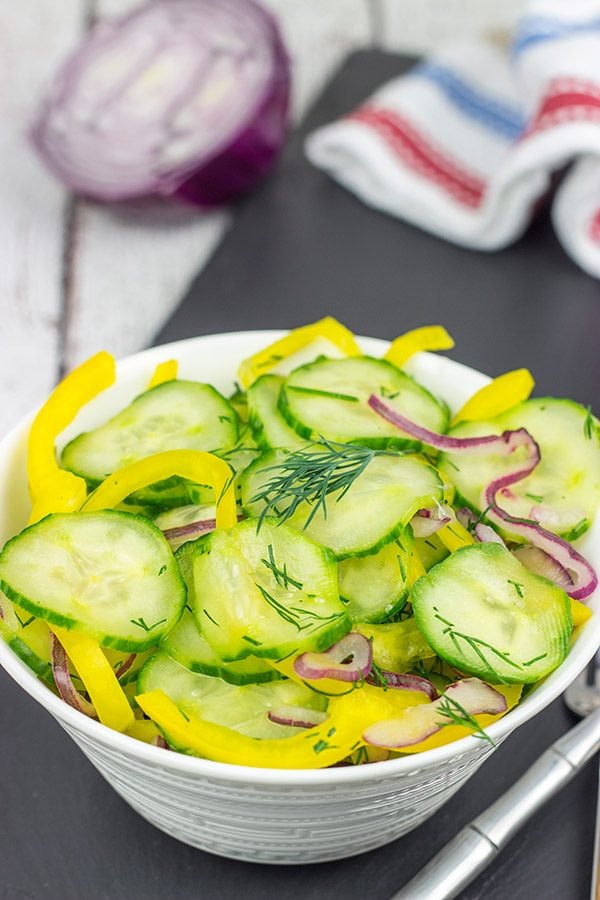 Growing up, we almost always had a cucumber or two in the fridge…but we hardly ever ate cucumbers.  Why is that?  Because my Mom loved to make vases out of those cukes.  Seriously.  My mother has always been super creative, and at some point she discovered that cucumbers actually make great flower vases.  I’m not kidding one bit here, folks.  A cucumber flower vase is a real thing!

If you think about it, cucumbers are mostly water already, right?  So the cucumber skin clearly does a good job at holding water.  So then it’s not a far logic jump to realize that a cucumber vase would also hold water.  My Mom would just slice off a thin piece of the end of the cucumber so that it would stand upright.  Then she’d cut the cuke in half and hollow out the middle with a spoon.  Boom.  Cucumber flower vase.  I mean it only holds a single bud, but it works!  And such was my life growing up. 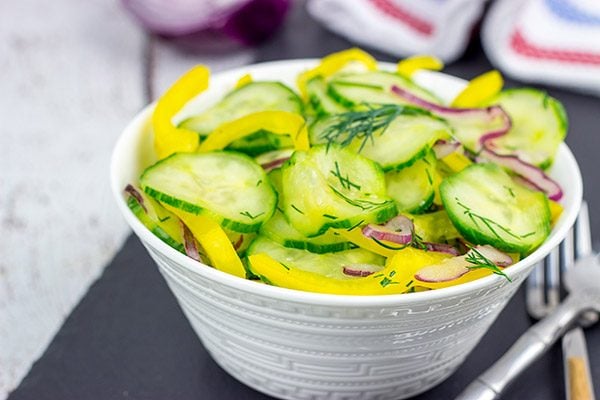 I made a cucumber flower vase for Laura when we first moved in together, and she told me it was an excellent waste of a cucumber.  I mean she’s an engineer.  She cuts straight to the chase.  While I still think it’s cool that a cucumber can function as a flower vase, I do prefer to actually eat my cucumbers these days.  Cucumbers really are one of those overlooked veggies, too.  Not anymore!  This Cold Cucumber Salad uses cucumbers as the star of the show…no flowers involved! 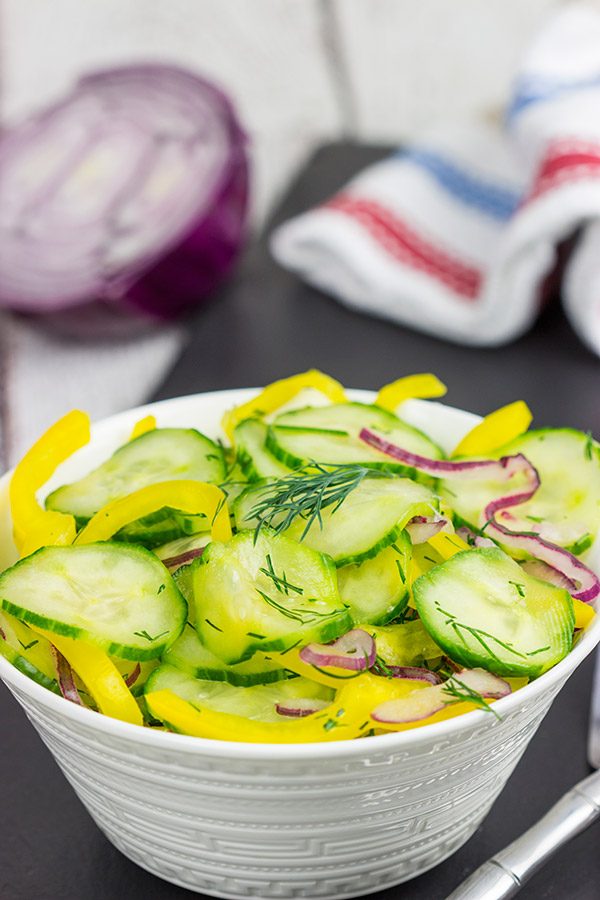 Now cucumbers do hold a lot of water (thus the vase thing), so you do need to let this salad sit for a bit for the water to drain out.  The recipe calls for you to salt the sliced cukes as the salt helps draw more water out.  But other than that, this Cold Cucumber Salad recipe is an easy one to keep in your back pocket when you need a healthy side dish to go along with your summer grilling recipes. 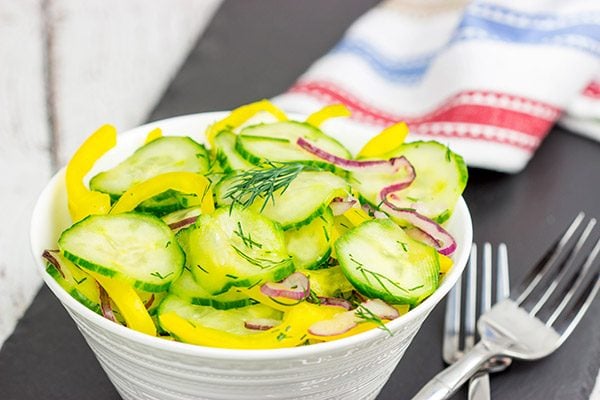 While I do love a good pasta salad (especially this classic Macaroni Salad) or potato salad (especially this southern-style Red Potato Salad), this Cold Cucumber Salad is much lighter fare…making it the perfect side dish to pair with a big juicy burger!  If you’ve ever made quick pickled onions, then you’ll recognize this Cold Cucumber Salad recipe.  A bit of vinegar, a pinch of sugar and then a bunch of fresh chopped dill for flavor.  Delish!  (Although you could use any fresh herbs you happen to have around.  I like dill here as it pairs well with the cucumber, but chopped basil or oregano would be tasty for an Italian twist on this recipe.)

So next time you’re in the store (or the garden), grab a couple of cucumbers to make this Cold Cucumber Salad.  And then grab an extra one to make a cucumber vase.  Cheers, friends! 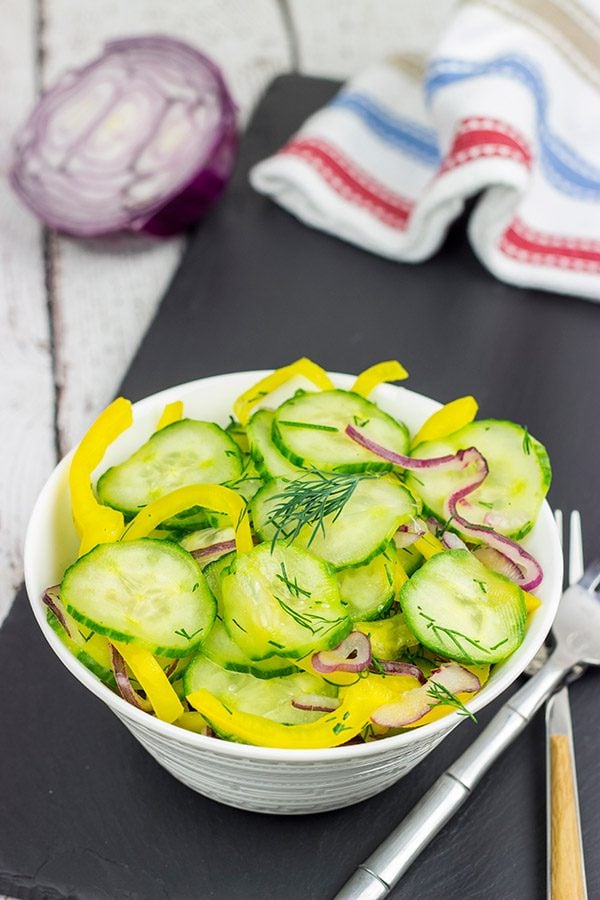 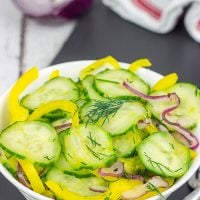 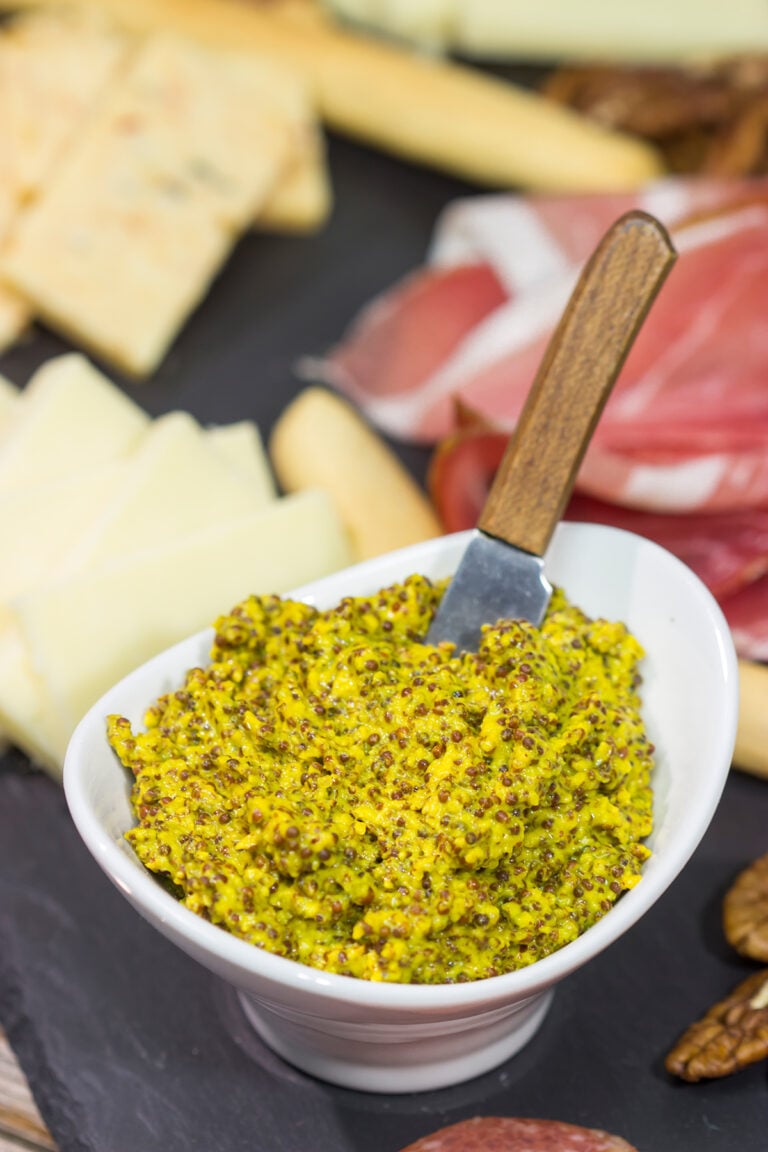